Notes on a death spiral

The UK is a world leader in failing energy policy, writes Richard Norris. 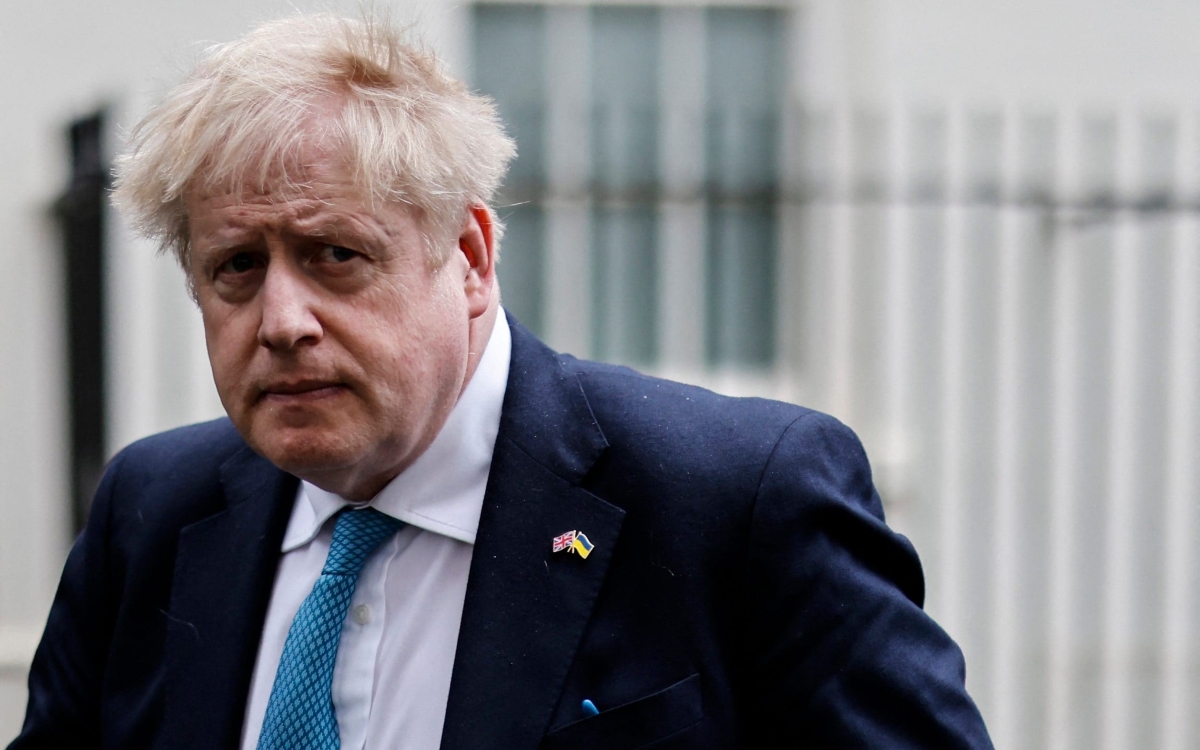 In the cult anime Death Note, the Shinigami (Gods of Death) play with human lives. A human who possesses the Shinigami’s notebook has the ultimate power of death over anyone by writing their name in the book. Outside of war, politicians rarely have the power over life and death, but energy policy is just that.

Someone once criticized a post of mine (on energy) for being “political”. Hopefully, that can be put to bed now as it must be obvious to anyone that energy is political.

The name of the UK has been written in the Death Note by high global energy prices.

But how bad can it be?

Global energy markets are pushing electricity and heating costs up to such an extent that by some estimations, lower-income households will be looking at 40% of their income being needed just for energy (excellent “explainer” article from Sky News). 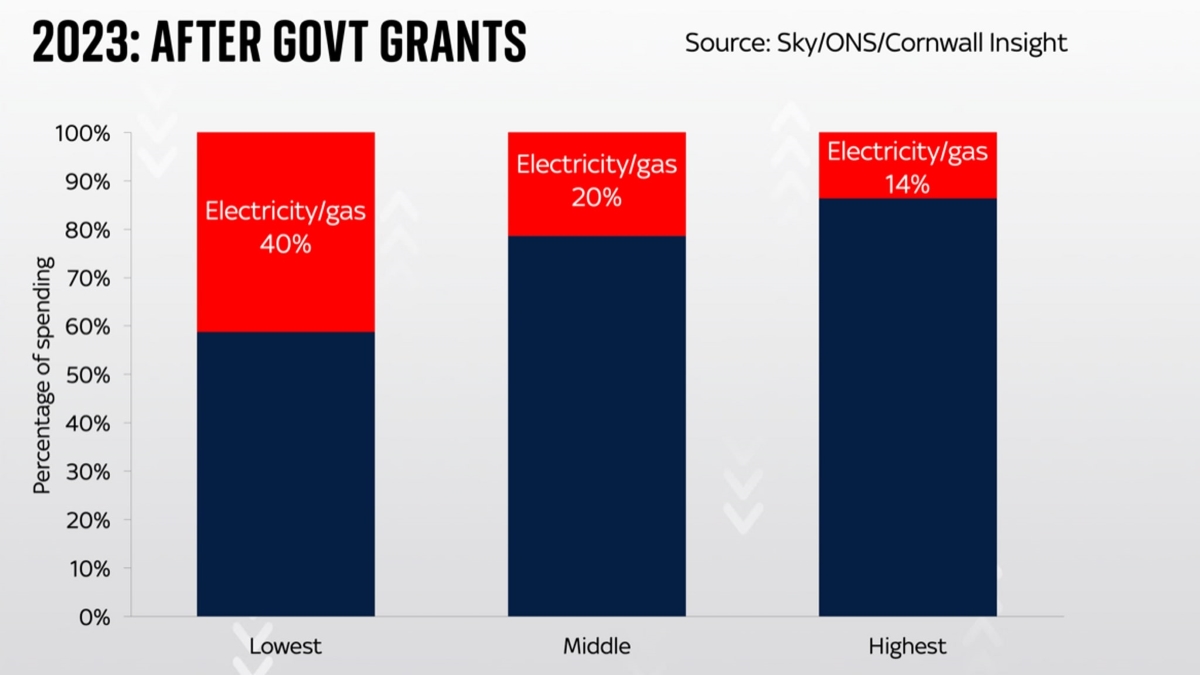 These numbers are “impossible” as noted by David Howell on BBC Newshour.

On top of this, those same high energy prices are feeding the hydra of inflation which will further squeeze these budgets. “Core” inflation numbers in low single-digits are clearly not representative of real inflation – food and energy are way north of this – and even the most recent forecast of 18% inflation is less than experience shows on many products. 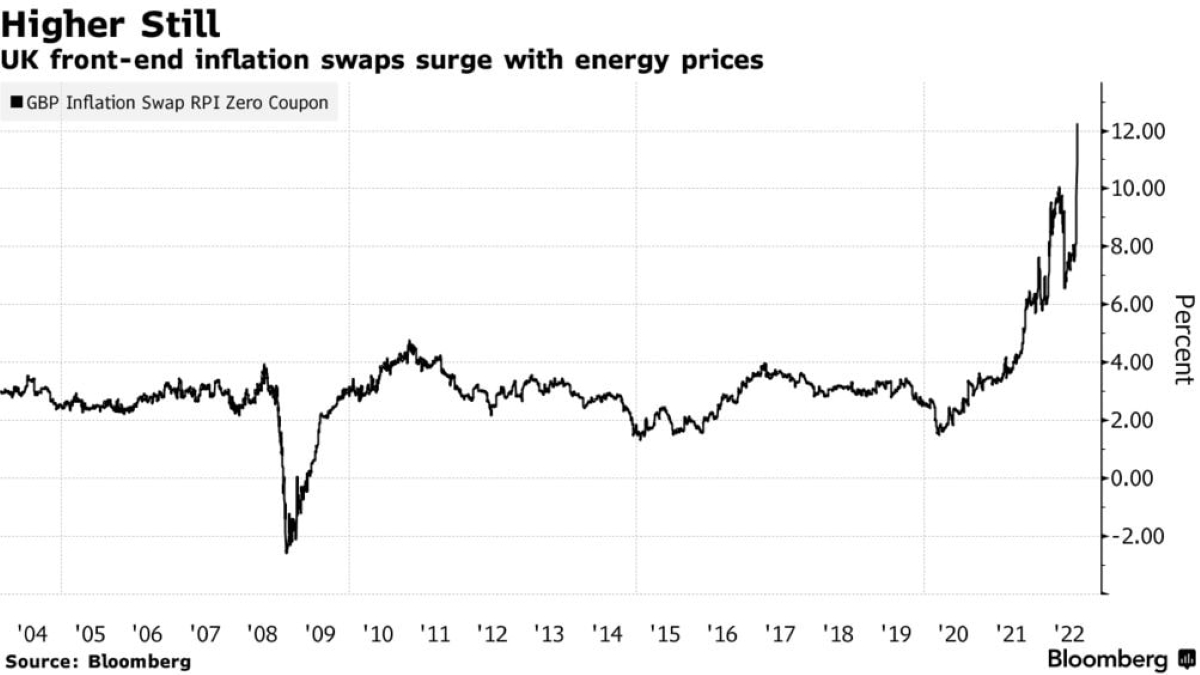 Let’s not forget that businesses don’t even have the benefit of these temporary price caps – energy costs are passed directly through to the business – who have a choice, go bust or pass the costs on to customers who probably can’t pay.

There is a defendable call for more help for lower income families – initially, this was in the form of “loans” –  estimated to cost some £30bn, but that just underscores the lack of understanding at the top. Providing a load implies that things will get better, this is a blip, and that repayment will be possible. What if this is a systemic change? What then of your loan?

Since the loans were announced, the situation has gotten much worse – and of course the clamour for the government to step-in and prevent people freezing and starving to death has risen sharply. Estimates of the cost to government of back-stopping energy costs is circa £40bn at the predicted October price-cap (£3,549) and as much as £120-£130bn if the price cap hits the expected £6,000 next spring. For reference, the government expenditure on Health is £160bn and Education is c. £100bn.

So the burden of global energy prices will be taken partially off the consumer and borne by the government. Sounds easy right? But the Government doesn’t have any money and its only source of revenue is you, the tax-payer. Heads you pay, tails you pay.

A billion may not be what it used to be, but nonetheless, these are staggering numbers. The Covid Furlough scheme cost £50bn (which the UK did not have). The UK fuel-tax +VAT contributes circa £40bn/year to the budget. A new “cost” to the government of £100bn is as impossible as it should be unimaginable.

Margaret Thatcher famously compared running the economy to running a household budget. You spend what you can afford, balance revenues and expenditure [and] don’t over borrow. So what would you cut back on and could you increase revenues? One thing is for sure, some of it would have to come from increased borrowing. Sunak has indicated that more borrowing would be bad long term, Truss seems to think it is a good idea (probably because someone else would have to deal with the consequences) – and it looks like profligacy and bad management will win the contest to be Prime Minister. Truss may channel Thatcher in dress-style and tank-riding, but not in fiscal policy.

Meanwhile, the interest on the national debt is now £50bn/year and rising– note that is just the interest, not any repayment of principal.

Now back to all those businesses being crushed by high energy prices – there will be mass closures and lay-offs. It’s a small step to see less corporate tax, less payroll tax, and less income to tax. Government revenues will decline, unemployment will rise (it is a lagging indicator and it is not showing yet in the statistics), energy poverty help schemes will rise, ballooning the already massive “social welfare” burden (£245bn).

Even for ministers notoriously bad at math, less income, more expenditure and more borrowing can mean only one thing – the country is barely a “going concern.” If this were a household or a business, would you lend it money? Would its promises to pay you back later be worth anything? Probably not.

Likewise, with a country in a death spiral, the currency will weaken – as indeed it has already started to with the GBP trading at its lowest against the USD since 1985. Maybe the only consolation will be that holidays to Europe will remain more or less on parity as the Euro collapses for similar reasons. A tragic race to the bottom.

Did I mention that the UK imports energy and pretty much everything else? The UK is particularly vulnerable to the price of gas because of policy decisions made several decades ago. These were economic and political in nature. The “Dash for Gas” provided a good excuse to kill off the troublesome (unionized) coal industry – which had held the country to ransom in the 1970s – as well as diversifying sources of energy and having a cleaner burning fuel. That a lot of gas had been discovered in the southern part of the North Sea was an additional plus point. The UK converted over 80% of its housing to gas heating with similar numbers for gas cooking. Gas also powers a significant part of the electricity grid – although the burden of heating is 4x that of electricity in energy units. 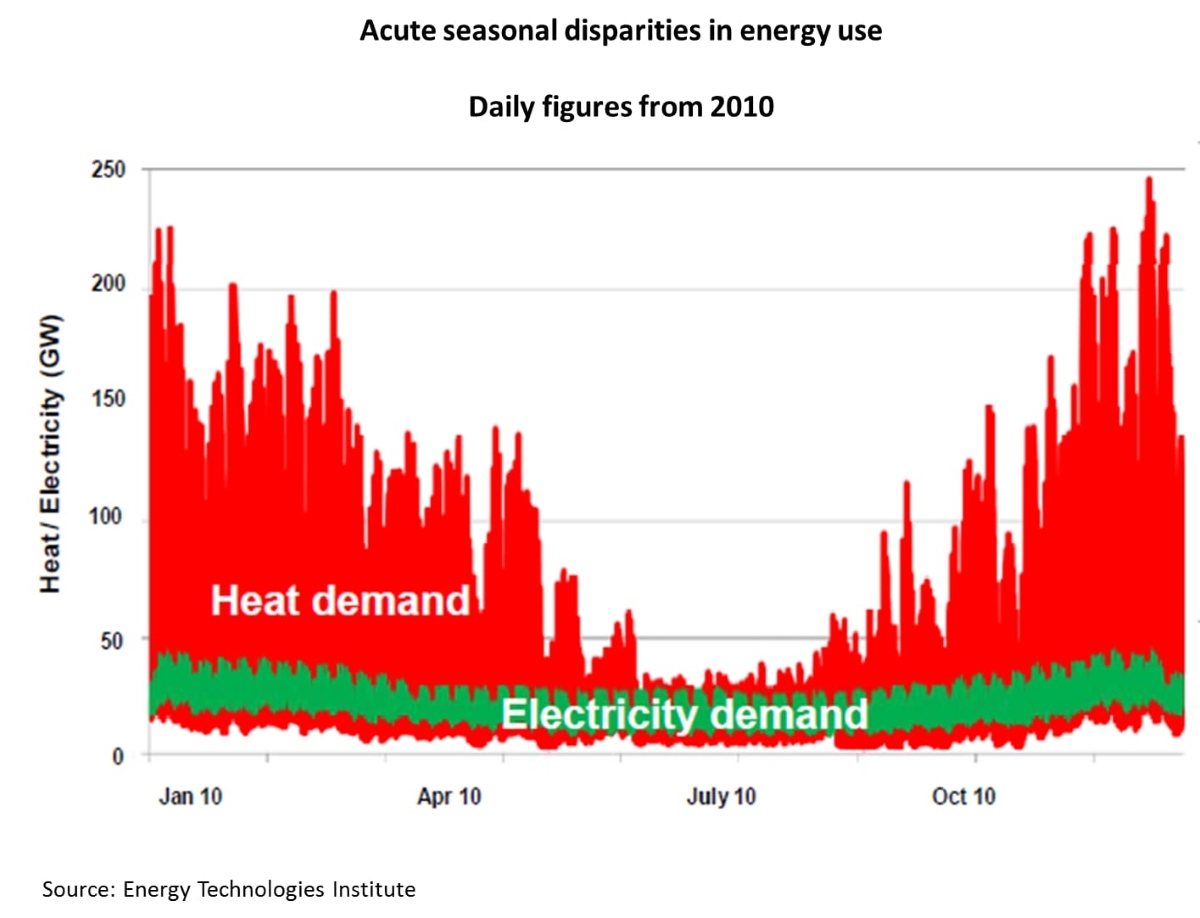 As domestic gas production tanked, there was no policy to ensure security of supply and an active policy to close the remaining production (thanks Greta). Oil of course is now imported as domestic production has fallen fast. Oil is trading at 2x its recent average price, gas is more like 10x (and has touched the equivalent of $500/bbl oil). 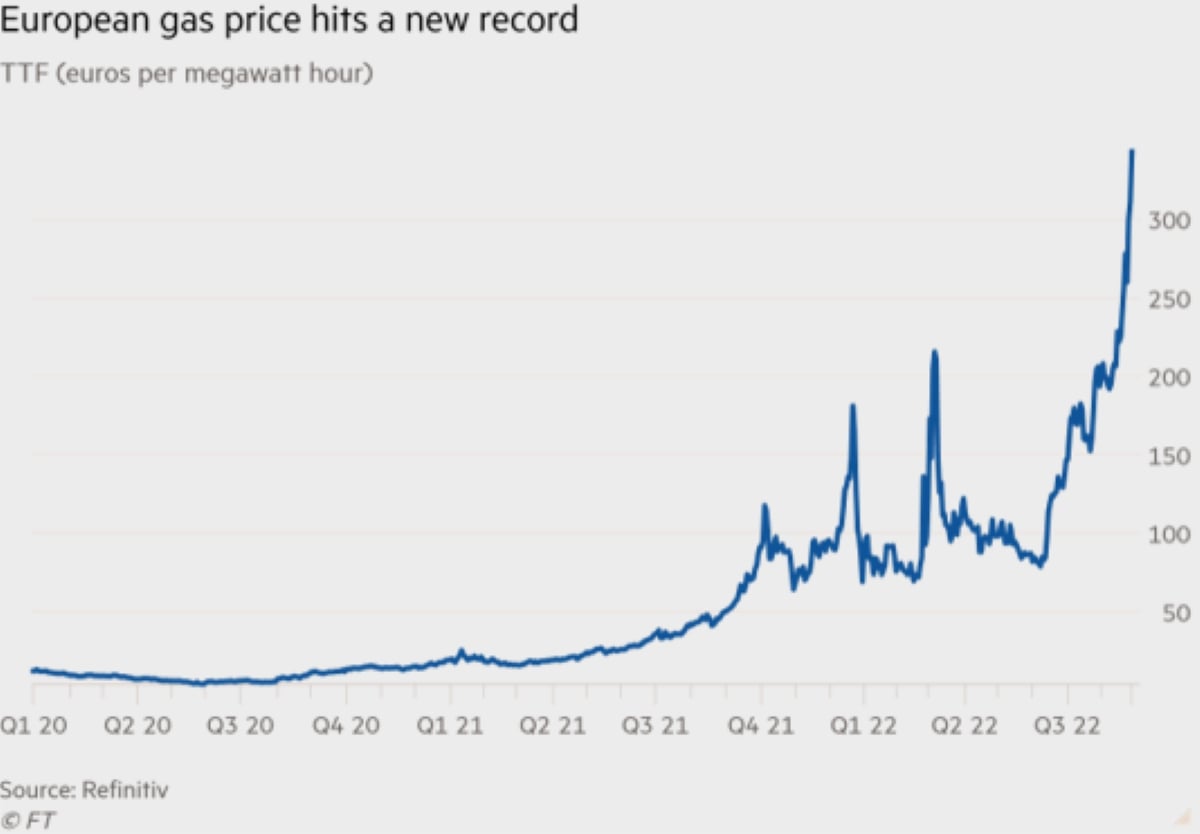 Round and down we go

On the same Newshour mentioned above (at about the 30 min mark) Lord Howell reflects on the relevance of the 1970s oil shock – and notes that there was a way out for countries like the UK due to (a) the ability to go and ask the Gulf states to produce more, (possibly over-remembering the UK’s importance in solving the crisis!) and (b) that China was in its infancy of low-cost manufacturing which helped beat inflation with cheaper goods (again I wonder about his memory – surely it was Japan and Korea in the 70s and 80s and China subsequently?). Whilst he did mention the appeal to the Gulf states – he spectacularly failed to mention the significance of North Sea Oil to the UK recovery and strength.

Equally, almost all modern-day politicians fail to mention the potential of increased supply. The 1970s supply shock drove prices up between 5x and 10x – which like all good markets was a strong signal to produce more. This, coupled with the political will to diversify away from Middle-Eastern sources, drove an exploration frenzy in the UK/Norway, US gulf of Mexico and US Alaska and subsequently in West Africa – leading to almost two decades of over-supply and low oil prices.

Are we hearing anything about increased gas production and/or any political will to engage? Admittedly it’s not quite so simple, because Europe needs better internal distribution infrastructure, but for the UK, diversified supplies, and overall higher global supply would go a long way to help the long-term price issues. Yes, future gas production won’t solve the crisis this winter – but indexes are predicting multi-year problems (and Russia is unlikely to return to being a reliable partner no matter how the current situation plays out). I wrote but didn’t publish a post on the “list as long as my arm” of gas projects in Africa that have remained on the drawing board for lack of funding. You reap what you sow.

Even in the face of the current crisis, there is a proposal before the European Parliament to apply punitive capital ratios on commercial banks if their dare to use their capital to fund anything “fossil fuel”. The multilaterals have long been prohibited from anything so 20th century.  “Keep it in the Ground” activists would be proud.

The middle class probably listens to Radio 4 and feel terribly sorry for the impoverished but will be horribly surprised when they find they are being asked to carry an even greater portion of the burden. Indeed, there are economists who think that this may well be the end of the middle class. As a French friend said to me once, “at least the French know how to protest.”

This article by Richard Norris was originally published by Energy IQ.