OPINION: How a strategy to undermine the Canadian oilpatch worked like a charm

It’s so bad that heavyweight energy investors with large bets on Canada are now seeing fit to write courtly letters to Prime Minister Justin Trudeau explaining the nature of their business, since there seems to be no other way for him to know it. They’re probably wondering why they’re wasting time, with so many of their brethren having already hightailed it out of Canada.

Just a few years ago, oil executives encountered in Calgary seemed like a taut and eager breed of problem solvers — sharp-eyed and ready to spring on the next challenge. No longer.

Why is the patient so ill when the No. 1 determinant, world oil prices are reasonably sound? Money is still fairly cheap. Success is not hampered by a shortage of labour or knowhow. New oilsands projects are coming online and the result is a record amount of our heavy oil being produced and ready for export. All of this should add up to success, but that’s not what’s happening.

The simple fact that Canadian oil is being heavily discounted seems an insufficient explanation for the current funk. So does the banal observation that a lack of pipelines is the problem. There is more to it.

The present we are living in suddenly bears an uncanny resemblance to the future envisaged a decade ago in an environmentalist strategy document now infamous in the Canadian energy business: The Rockefeller Strategy, so named because of the foundation on whose letterhead it was circulated.

The basic strategy was to raise the negatives of the oilsands, raise costs, slow down and stop infrastructure, and enrol key decision-makers in opposition to Canada’s oil industry. Ten years later, all of those things have come to pass.

The Rockefeller group, based in the United States, laid down five specific tracks to solve what they saw as the Canadian problem. First, they would stop the expansion of pipelines and other infrastructure. Second, they would forcibly cause reforms to the governance of “water, toxics and land.” Third, they would “significantly reduce future demand” for oilsands product. Next, they would leverage the debate to policy victories in both the U.S. and Canada. Finally, they would persuade policymakers that oil wasn’t going to be needed in the future because we’d have electric cars.

To execute this strategy, Rockefeller commenced a decade-long campaign to taint the world’s image of Canada and turn Canadians against each other. It was a brilliant success. Here is a slide from the campaign plan: 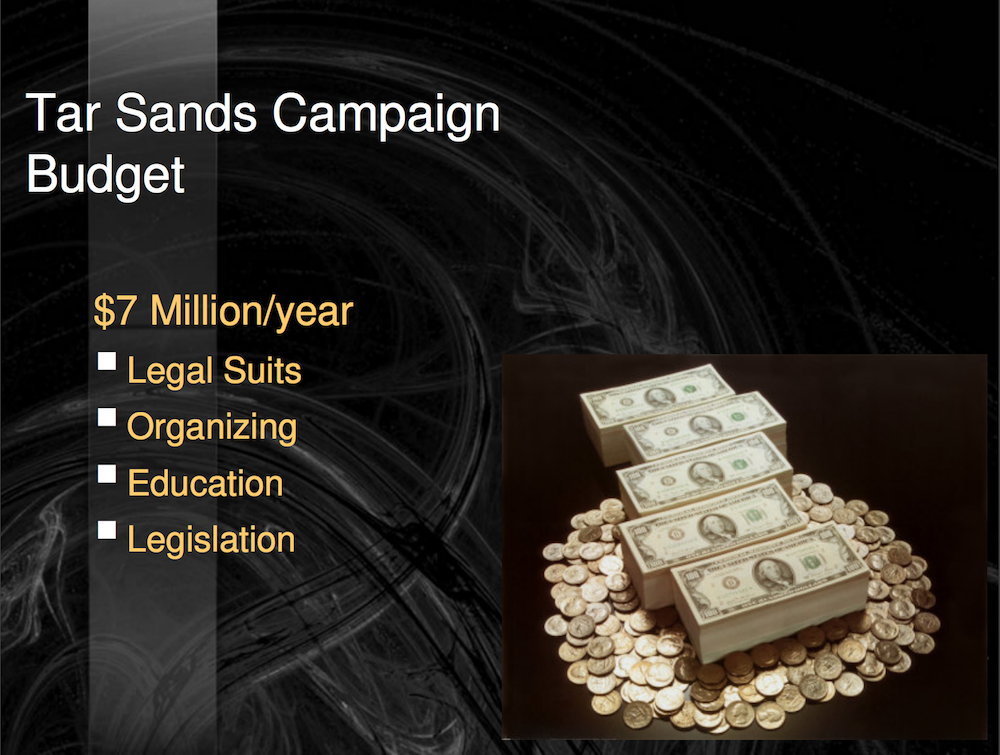 Rockefeller’s funders must be pleased with Trans Mountain’s expansion in limbo, the two next best pipeline prospects barely registering a pulse, and Alberta lowering its oil production on Jan. 1.

Next, the Trudeau government is preparing to pass legislation to permanently bar oil exports from leaving ports on the northwest coast of British Columbia and break up our distinguished National Energy Board after it was persistently criticized by Rockefeller’s partners in its anti-oilsands campaign.

Our oil is called “ethical” for good reason. Yet, few of Canada’s high environmental and social standards that apply to domestic production are imposed on the inward flow of imported oil. It’s another of those dissonant facts we have become accustomed to. Discriminate against ourselves? Well, if we must. Against others, like Saudi oil — we wouldn’t dare.

Thankfully, the environmentalists’ goal of reducing future demand for western crude oil has been less of a success. Based on current projections from the Canadian Association of Petroleum Producers, crude oil production will jump 1.4 million barrels per day by 2035 to 5.6 million.

One thing the Rockefeller group didn’t predict was the ingenuity of Canadian oil marketers as oil by rail, truck, and optimized existing pipelines has ensured that even if it’s going cheaply to market, that oil is still getting to customers. Still, without changes, the Rockefeller strategy may yet prevail.

As 2018 closes, there is a rising bitterness in the West. A highly beneficial, ever-improving industry tooled for greener stewardship was targeted for a takedown that worked. No particular environmental benefits have resulted. The only clear winner here is the U.S. economy. Landlocked Canadian oil means cheap feedstock for American refineries. We are, unwittingly, helping to Make America Great Again where annual economic growth is almost four per cent versus a paltry two per cent in Canada.

The Trump energy and economic expansion, love it or hate it, means that every environmental measure in Canada is of trivial global impact.

Congratulations, Canada, you’ve been thoroughly had by a U.S. eco-campaign that hurt our economy but hasn’t slowed U.S. oil interests one iota.