Our LNG? Yes, there is a market.

It was sad to see Andrew Weaver citing health reasons as he stepped down as leader of the BC Green Party, and announced he would not seek re-election as MLA for Oak Bay-Gordon Head. We had to respect his tenacity in the legislature as a champion of fighting climate change, and for seeking to keep governmental feet to the fire on the issue. But we still shake our heads over some of his pronouncements on LNG in BC. 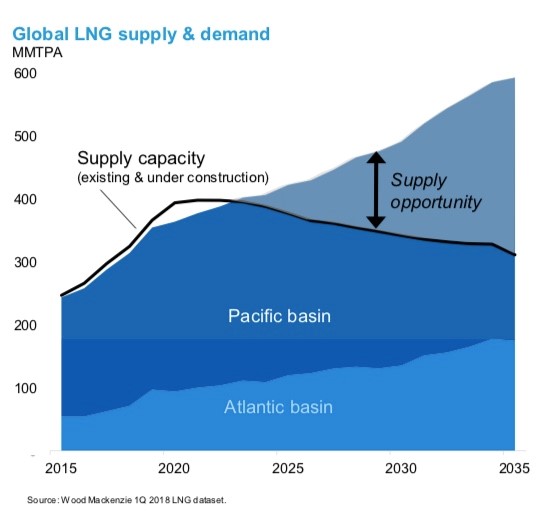 While his key argument was that that BC could not process and export LNG and, at the same time, meet its climate-change targets, he also came up with pronouncements like these:

Canada may indeed have missed a boat or two by being stunningly slow in evaluating and approving LNG projects, while others race to become leaders in the LNG game. (The US has seven LNG-export terminals in operation today, and 17 more could be in place by 2023.)

But the thought that there is “no market” for BC LNG clearly did not strike the board of Royal Dutch Shell, for one, as they put up billions as 40%-partners in the $40-billion LNG Canada project.

True, right now there is a glut of LNG on the world market, and prices are ’way down. But investors such as Shell don't place their bets on what today’s price is. They look at what they think demand and prices will be 20, 30, and 40 years down the road.

So let's look at what big players think will happen to the world LNG market:

Shell said last week that global demand LNG is expected to double to 700 million tonnes by 2040, with gas continuing to play a key role in a lower-carbon energy system.
"The global LNG market continued to evolve in 2019, with demand increasing for LNG and natural gas in power and non-power sectors," said Maarten Wetselaar, Shell’s integrated gas and new energies director.

He added: "While we see weak market conditions today due to record new supply coming in, two successive mild winters and the coronavirus situation, we expect equilibrium to return.” That will be "driven by a combination of continued demand growth and a reduction in new supply coming on-stream until the mid-2020s.”

“Asia remains the dominant market for LNG imports, although the pattern of imports within Asia shifts, with China, India and Other Asia overtaking the more established markets of Japan and Korea, and accounting for around half of all LNG imports by 2040.”

It's true that Chevron, its cash-flow hit by the current low gas prices, is seeking to sell its interest in the Kitimat LNG project in BC.

But Chevron’s chair, John Watson, said in 2018: “Natural gas is not just a transition fuel, it is the fuel of the future. Experts project global LNG demand will increase nearly 130 percent by 2035.”

Analysts Wood Mackenzie: “The outlook beyond (2020) is bullish, with 65 mmtpa (million tonnes per annum) of new supply needed to meet growing demand by 2025 – that's 20 mmtpa more than we forecast a year ago.” Wood Mackenzie provided the graphic at the top of this blog.

The International Energy Agency: “Looking at LNG specifically, the market is set to undergo profound changes over the next five years. China and India emerge as major LNG buyers along with increasing imports to Europe.”

To sum up, the consensus among forecasters is that LNG supply will exceed demand (meaning low prices) for the next couple of years, and then the market tightens around 2022. It should then be a strong sellers’ market by 2024-25, perfect timing for LNG Canada to come online in 2025. Shell and its partners in LNG Canada are betting $40 billion on that.

And to close, as the BC LNG Alliance says, “Make no mistake, if BC doesn’t develop an LNG industry it doesn’t mean there is any less LNG in the world. It just means that other countries without our strong environmental regulations will produce and supply it and see all the benefits instead of British Columbians.”