Municipalities are being asked to participate in campaigns that would seek funds from fuel companies. A range of differing views is emerging as to its efficacy, writes Stewart Muir.

In 2017, a local environment group, the West Coast Environmental Law Centre (WCEL), started a climate accountability campaign in British Columbia (BC) and started lobbying local municipalities to send letters to the largest fossil fuel companies requesting payment to their communities for climate related damages to infrastructure.

Since that time WCEL has successfully convinced 20 municipalities and on regional association, the Association of Vancouver Island and Coastal Communities (AVICC), to send letters. This resolution was then considered and failed at the Union of British Columbia Municipalities (UBCM).

In addition to the letters, the City of Victoria recently passed another resolution that actually called for a class action lawsuit and asked for the UBCM to consider the climate-related costs to BC municipalities to prepare for the possibility of filing a lawsuit. 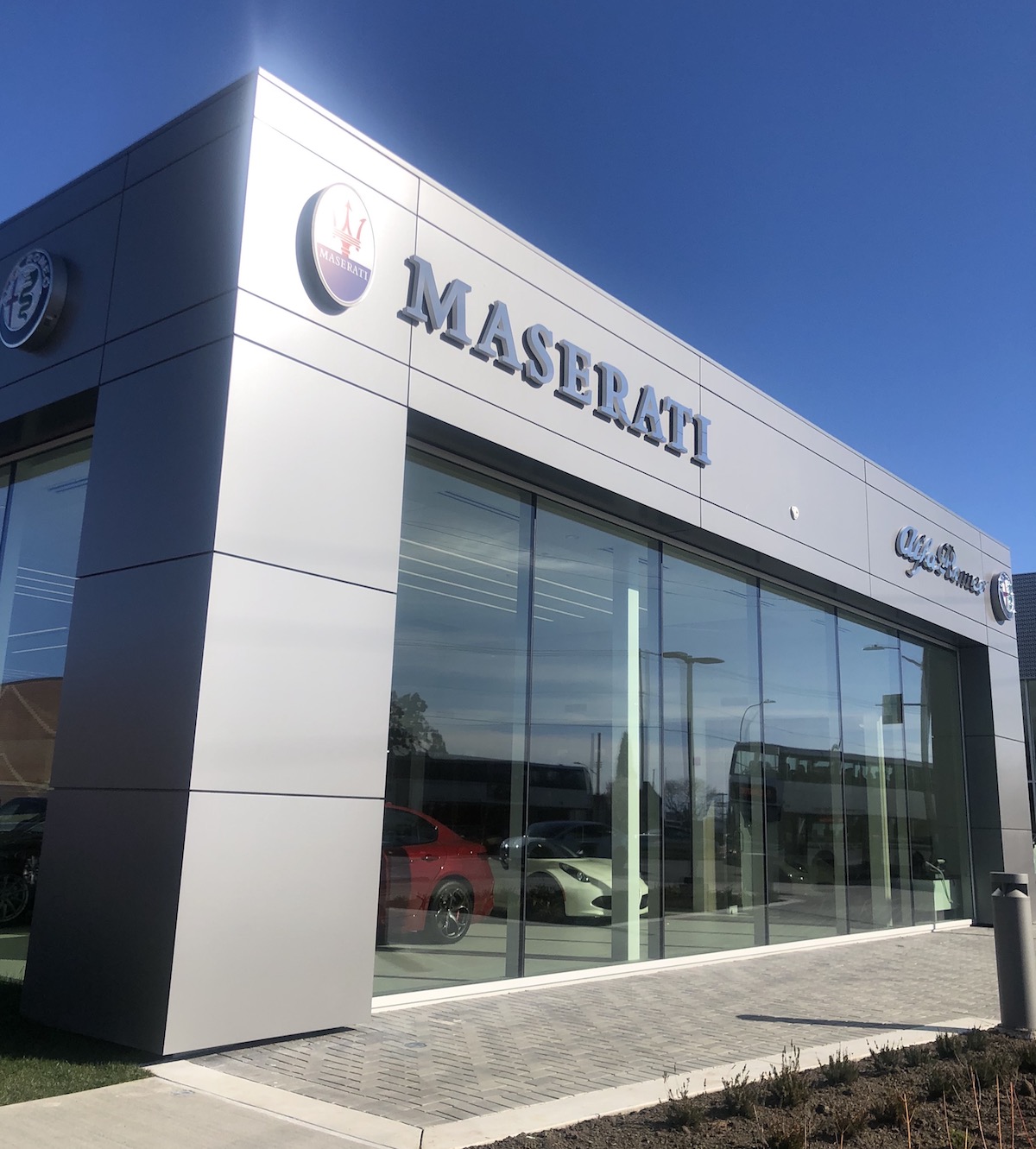 I recently noted that a shiny new Maserati dealership has opened in Victoria (pictured), having earlier been approved by the city council under the leadership of its “climate change warrior” mayor, Lisa Helps. The annual cruise ship season bringing fuel-intensive ships to Victoria’s harbour is soon to begin, and to deal with overall demand the Victoria International Airport is currently building a large addition to its departure lounge. Let's face it: the fuels used in everyday life do have their positives and negatives, but let's be honest: they are not the same thing as tobacco. Yet the approach that the city is taking is borrowed from an earlier generation of litigation against "Big Tobacco". As wrongheaded it may be to attack a substance like the hydrocarbon which is the essence of modernity, it is not without an internal logic. WCEL and many other environmental groups seem to believe that the thing to do with their campaign at this point is to escalate into higher levels of government. They have sent a letter to BC Premier John Horgan which urges the provincial government to create and pass legislation that would allow municipal governments to make it easier for the municipalities to successfully sue for climate-related damages. WCEL also worked with the city of Burnaby to send a similar letter to the Premier.

It was also revealed at a Vancouver city council meeting that the city’s legal department is researching the possibility of the city launching a climate-related lawsuit. The revelation was prompted by new city councillor Christine Boyle, who campaigned on the idea of climate liability.

Significant fallout from WCEL’s climate liability campaign occurred after the Resort Municipality of Whistler sent a letter to Albertan based CNRL seeking payment for climate-related damages. This action led to a major backlash from Albertans who found the letter to be hypocritical, since Whistler’s economy is based on tourism and requires people to use fossil fuels to fly and drive to the municipality. The letter came shortly before a large conference of institutional investors was set to take place in Whistler in January, but conference organizer Canadian Imperial Bank of Commerce (CIBC) announced that the oil and gas portion of the conference was canceled after other Canadian energy companies decided not to attend, citing the letter. The Mayor of Whistler was then forced to issue an apology on Facebook.

Fort St. John also passed a resolution stating “…writing letters, passing resolutions and filing class-action lawsuits in the name of ‘climate liability’ against major innovation drivers and employers is not an appropriate direction for BC municipalities…” This vote also tees up the resolution to be considered at another regional association of municipalities in May (specifically the North Central Local Government Association). If it passes there it can also be considered at UBCM.

The Resource Municipalities Coalition, which is based in Fort St. John, sent WCEL a letter signed by Mike Whalley (their executive director), Mayor Lori Ackerman (Fort Saint John), Mayor Rob Fraser (District of Taylor), Mayor Keith Bertrand (District of Tumbler Ridge), and Mayor Joan Atkinson (District of Mackenzie). The letter says “We prefer working together on productive and proactive solutions to mitigate the impacts of climate change, rather than focusing limited budgets and resources on a letter writing campaign that you readily admit will have little impact and virtually no hope of succeeding.”

Where does it go next? Business organizations are increasingly stepping up to draw attention to some of the fundamental contradictions of the litigation strategy. In the words of Victoria Chamber of Commerce president CEO Catherine Holt and chair Dan Dagg in a letter to Victoria's mayor and council, “Climate change is not about us vs. them.”  Here is their letter: 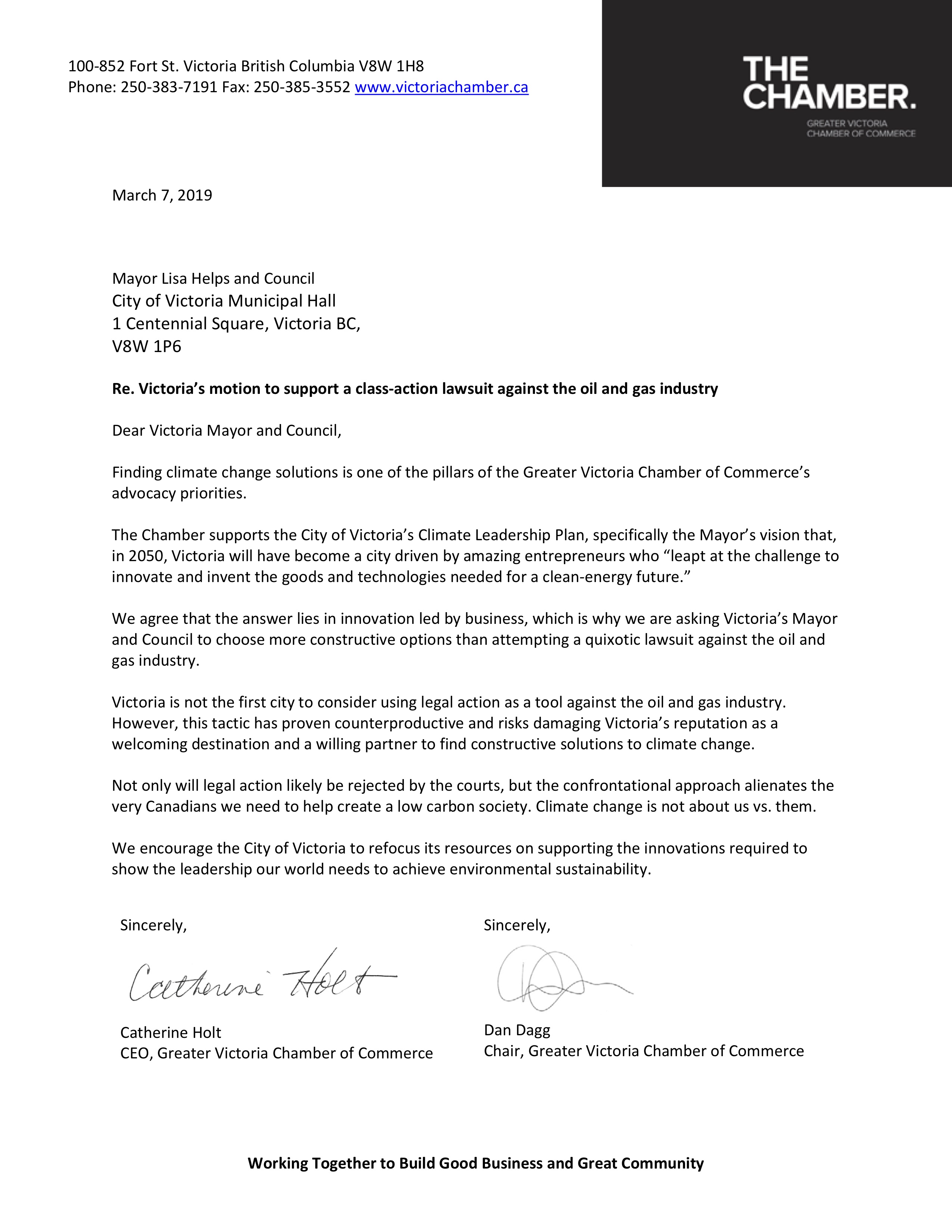 The Hotel Association of Greater Victoria has also weighed in through a letter to Victoria's mayor and council. To the hoteliers, it is clear that the litigation campaign is being noticed in Alberta, Saskatchewan and northern BC – all places that traditionally have been sources of both tourists and retirees for Victoria. The "leisure, corporate and conference business" is not helped by council's actions, states the association: