"Canadian shale gas investment not a mistake": That's the message this week from new CEO of the Malaysian energy company that is behind the largest-ever project planned for British Columbia.

Reprinted from THE EDGE Malaysia Business Investment Weekly, May 2-8 2016 issue

The crash in crude oil prices has not only taken a heavy toll on Petrollam Nasional Bhd’s (Petronas) financials but has also put the national oil company’s investments abroad, especially its venture into unconventional energy – shale gas – in Canada, under the spotlight. 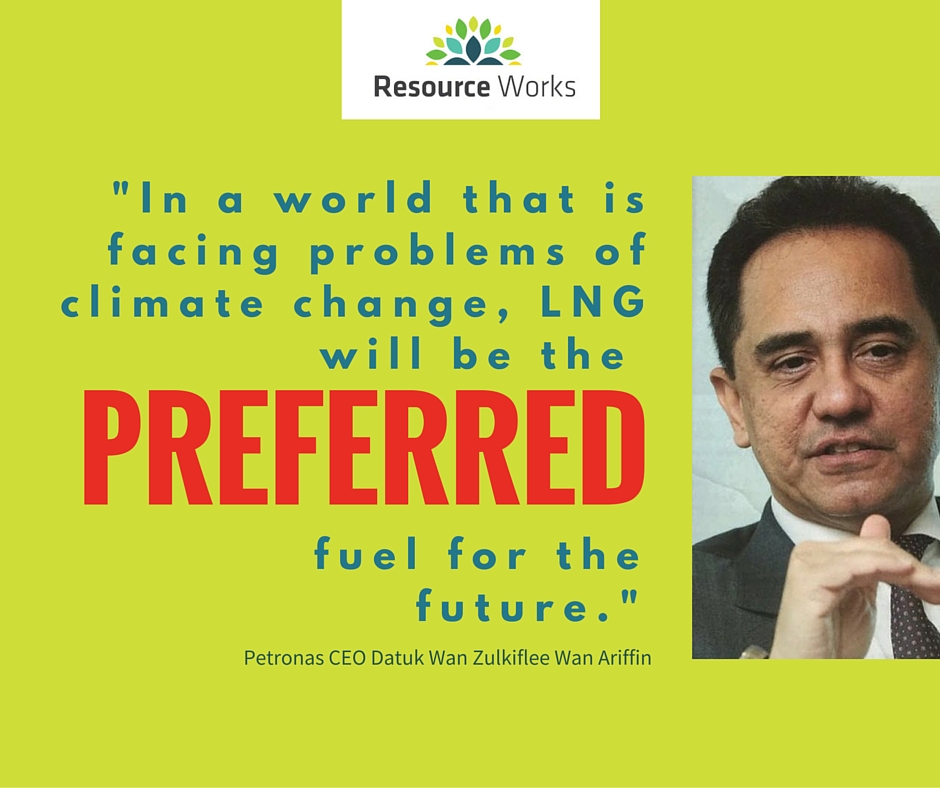 Concerns are mounting that the additional investment required of possibly more than C$10 billion will drain Petronas’ coffers, which have already been stretched by the low crude oil prices. Furthermore, regulatory and environmental issues seem to have become endless hurdles for the oil company.

However, Petronas president and CEO Datuk Wan Zulkiflee Wan Ariffin, whose immediate concern is the pending renewal of certain LNG (liquefied natural gas) supply contracts in the Far East markets that expire in the next few years, has no intention of exiting the investment.

He took the helm of Petronas a year ago, at the worst possible time. He is undergoing a baptism of fire as the oil and gas industry experiences its roughest patch in recent history.

“[The investment in] Canada is not a mistake. It is a long-term project,” he told The Edge when asked if the venture was a bad idea, considering the large capital expenditures (capex) Petronas needs to pump in and the current soft energy prices.

He believes the acquisition of Progress Canada, although at a premium to the market price, was a necessary investment for a big gas player like Petronas and would yield handsome long-term benefits. At the moment, the asset is producing gas of about half a billion cu ft for the Canadian market. But he stresses that any decision made on the LNG project and terminal has to be commercially driven.

“I am very bullish on the LNG market. In a world that is facing problems of climate change, LNG will be the preferred fuel for the future. It is the more friendly fuel and will have its place among the renewables, coal and nuclear.

“Petronas is the top player in the LNG market. We need to have reserves to allow us to continue to be in this position. Now, we have a resource base in Canada that is substantial. I think these are the prerequisites that will enable us to be a major LNG player in the future,” says Wan Zulkiflee, defending the investment decision made by his predecessor, Tan Sri Shamsul Azhar Abbas, who passed him the baton in February last year.

Bountiful reserves, Wan Zulkiflee understands, is a trump card that Petronas needs to have up its sleeve when it comes to negotiating with gas buyers in the Far East. The first shipment of natural gas left the local stores in 1983 and until now, many of the so-called fundamental customers are still sourcing their LNG from Bintulu, Sarawak.

Petronas is awaiting the environmental report from the Canadian government before a final investment decision (FID) is made on Pacific Northwest LNG. “We haven’t made the FID yet … we need to look at what the constraints and conditions are in the final report. Then we will decide.

“So, there is no walking away from the Canadian gas asset; we have big reserves there that we can monetize. As for LNG, it is a question of whether we can proceed with the way the plant is being designed. The gas in the ground remains our asset; it is how we monetize it that matters. As it is, we are already selling it to the locals.”

To recap, Petronas bought up Toronto-listed Progress Energy Ltd in December 2012 for C$5.5 billion cash, giving it access to a massive shale gas reserve in Canada. The size of the reserve is equivalent to one quarter of what we have at home, an instant boost to the national oil company’s future supply. This put Petronas in a strong position to offer a long-term, secured supply of natural gas to its customers.

In the past three years, Petronas has sold 38% equity interest to several parties. Currently, it holds a controlling stake of 62%, China Petroleum and Chemical Corp (also known as Sinopec Ltd) owns at 15% stake. Both Japan Petroleum Exploration Co Ltd and India Oil Corp Ltd hold 10% each while state-owned Brunei National Petroleum Co Sdn Bhd has 3%. Each of the stakeholders is also committed to purchase LNG from Petronas.

To sell natural gas to the Asian market, Petronas will need to undertake the Pacific NorthWest LNG project, which involves the building of a natural gas liquefaction and export facility on Lelu Island near Prince Rupert Port in British Columbia (BC) province, Western Canada. Gas pipes would be laid to transport the natural gas produced by Progress Energy in northwest BC and northwest Alberta to the LNG plant for export to Far East Asia. The capex requirement is in the range of C$9 billion to C$11 billion, which appears enormous when crude is hovering below US$50 and the ringgit has depreciated sharply. All the stakeholders also participate in the Pacific NorthWest LNG project.