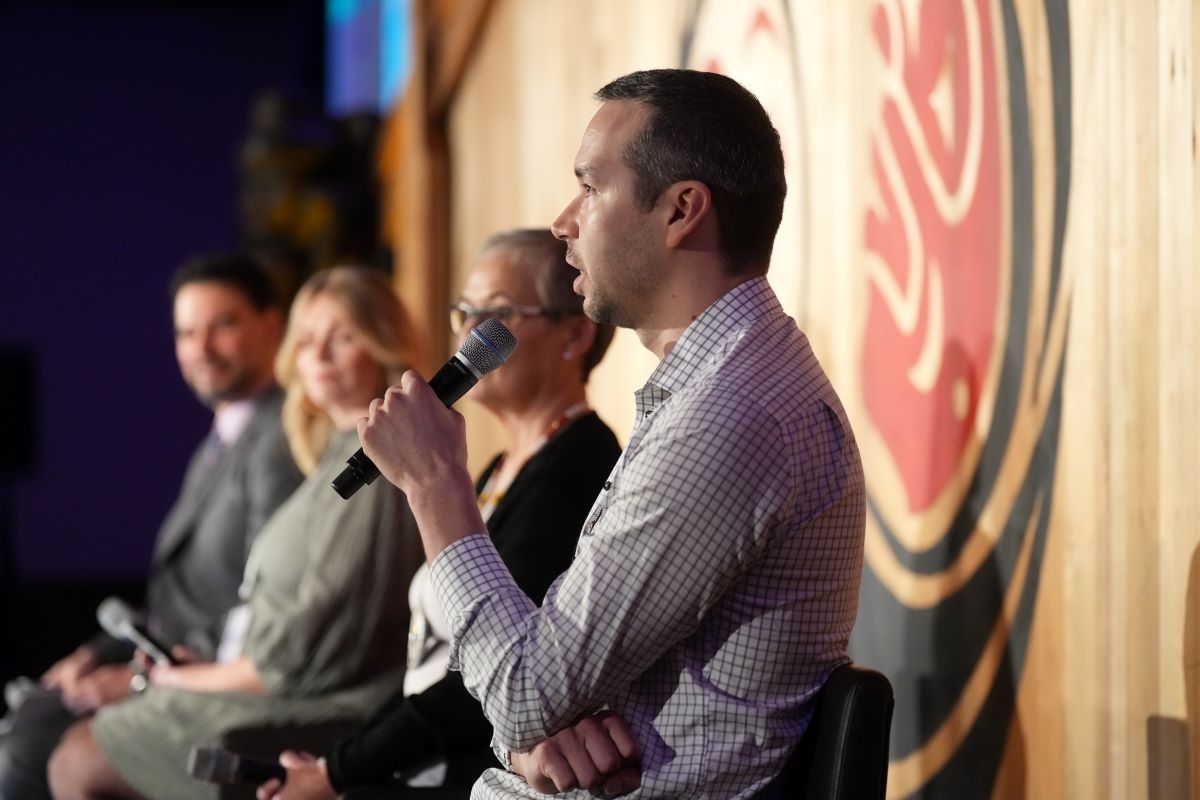 With the topic of Indigenous ownership in major projects front of mind, a Coastal GasLink sponsored panel featuring Chiefs Corrina Leween and Justin Napoleon opened the third year of the Resource Works supported Indigenous Partnerships Success Showcase on May 26th, 2022.

Indigenous communities along the 670-kilometre Coastal GasLink (CGL) pipeline have signed an option agreement for a 10 percent equity stake in the multi-billion-dollar project, which First Nation leaders say aligns their interests with Canada’s natural resource sector.

The equity option is in addition to 20 agreements Coastal GasLink has with Indigenous groups along the route, which provide opportunities for contracting and employment as well as other long-term benefits.

“This marks the first time that our Nations have been included as owners in a major natural resource project that is crossing our territories,” said Chief Corrina Leween of the Cheslatta Carrier Nation, which is a member of the CGL First Nations Limited Partnership Management Committee, one of two First Nation coalitions that represent communities along the pipeline route. The other is the FN CGL Pipeline Limited Partnership, represented at IPSS by Chief Napoleon of the Saulteau First Nations.

“The finalization of the option agreement represents a historic milestone in our desire to participate as equity owners in Coastal GasLink…This deal is important because it demonstrates the value First Nations can bring as true partners in major projects,” said Chief Leween.

“For years, we have watched industry and governments generate revenues from the operations of their projects while we live with the impacts. This investment in Coastal GasLink will finally start to shift the landscape, aligning industry and Indigenous peoples’ interests over the entire life cycle of a project,” said Chief Justin Napoleon. 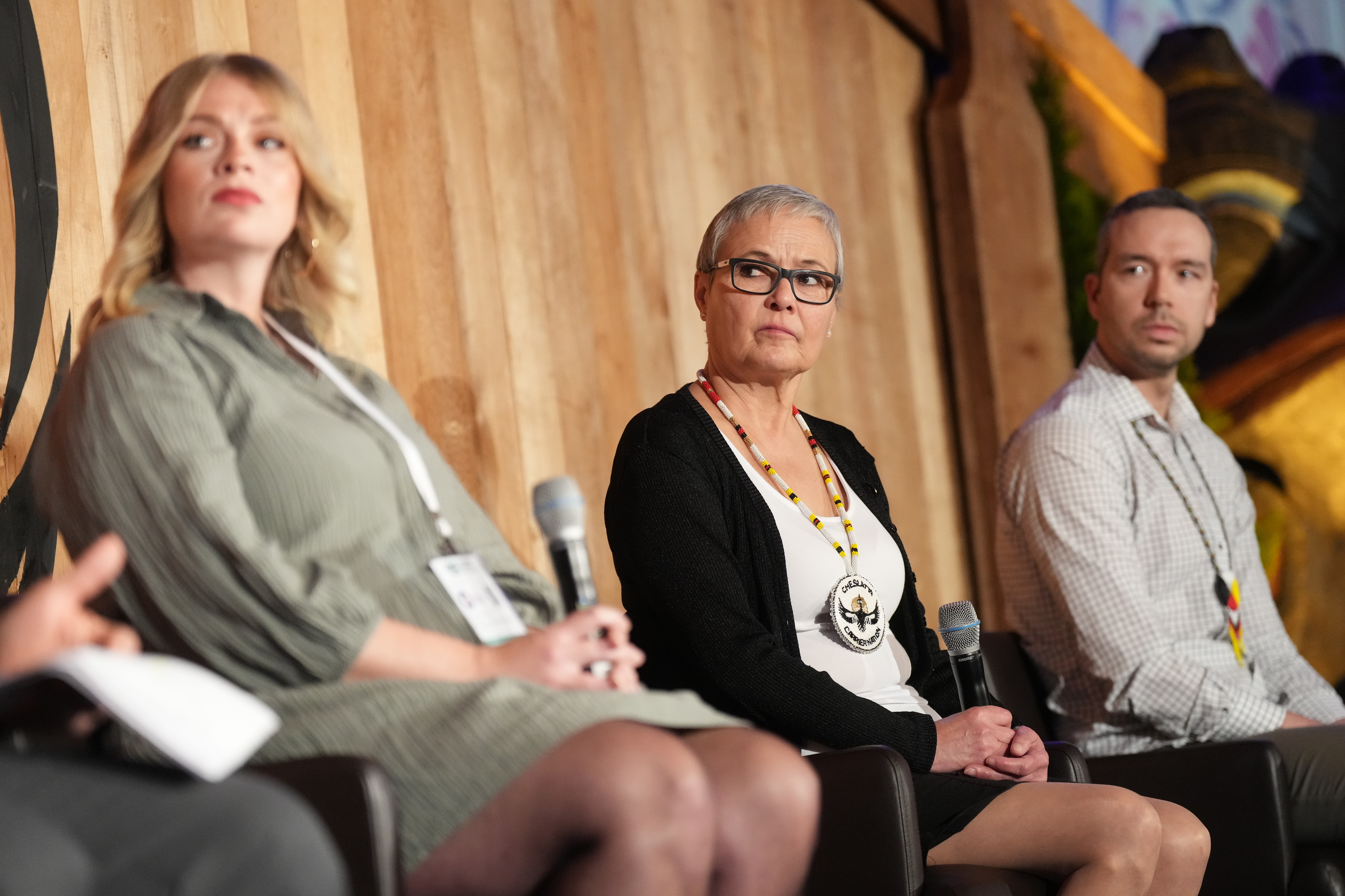 Closing the panel, Chief Leween said, “I think one of the key messages that I would like to leave today is that First Nations are getting their business in order.

“We're not a passenger anymore in our community. And we want to ensure that we participate fully and that we participate with the knowledge and the informed decision ability to make our own minds up. We've always been able to, but we've had that roadblock of not having access to capital.”

That access to capital represents a fundamental shift for the participating First Nations and Canada as a whole.

The panellists stressed the revolutionary impact of ownership in the pipeline, from access to capital to future deals.

“This project is the first of its kind that I've experienced,” said Chief Napoleon. “And the importance of it is the precedent that it sets and the ability for nations to have their own income coming in. That's going to give them the ability to self-determine their way forward.”

For Coastal GasLink, the deal represents the potential for an entirely new way of doing business.

“I think it's really exciting for us as an organization because it's the first crack at something that really works — on a big project with so many Nations. And it sets a precedent for us in many ways, to look at how we might apply that to other opportunities as well,” said Tiffany Murray, Director of Indigenous Relations.

In the meantime, Coastal GasLink is constructing the pipeline to safely transport natural gas from the Groundbirch area west of Dawson Creek, BC, to the liquefied natural gas export facility being constructed near Kitimat, BC.

Over the course of the project, Coastal GasLink will create over 4,500 short-term jobs, which will bring millions in economic benefits to local communities. TC Energy will operate the pipeline once in service. When completed, the pipeline will represent the first direct path connecting abundant Western Canadian Sedimentary Basin natural gas supply to global markets.

“We continue to learn a great deal from these relationships and value the opportunity to become true partners with Indigenous communities throughout the lifecycle of this project,” he said.

This story was originally published by the Indigenous Partnership Success Showcase, which will return in 2023. Visit www.Indigenoussucess.ca to learn more.