How things were made right after the Mount Polley spill

Dr. 'Lyn Anglin, founding president and CEO of Geoscience BC, takes a look at what happened at the British Columbia copper and gold mine after its 2014 tailings accident.

I've taken a look back over the progress that has been made by Mount Polley in response to the well-known tailings spill, and in this post will be sharing some facts and a perspective about the remediation work that they have done on areas impacted by the incident.

My interest here is not merely as a geologist. One month after the spill occurred, I accepted the newly created position of Chief Scientific Officer of Imperial Metals, owner of the Mount Polley mine, so that I could employ my professional skills in helping them assess the impacts of the spill and provide advice on their remediation and monitoring work. After almost five years of work, I retired from the company and am now sharing my perspectives as a private individual.

You might say I'm biased. I'm also a scientist, and I believe my judgment on this issue can be trusted. As the fifth anniversary of the spill approaches, I am concerned at a plethora of misinformation being shared in the media, especially social media, about the tailings spill, the company’s response, and the impacts of the event. There have been lots of suggestions that the company suffered no consequences from this incident, and many have implied that the company has done nothing in response to the event.

In my opinion, the company certainly did not “walk away” from the spill. I bore witness to the expenditure of an estimated $70 million by the mine on environmental impact studies, remediation work, and on-going monitoring of the areas impacted by the spill.

Background on the incident 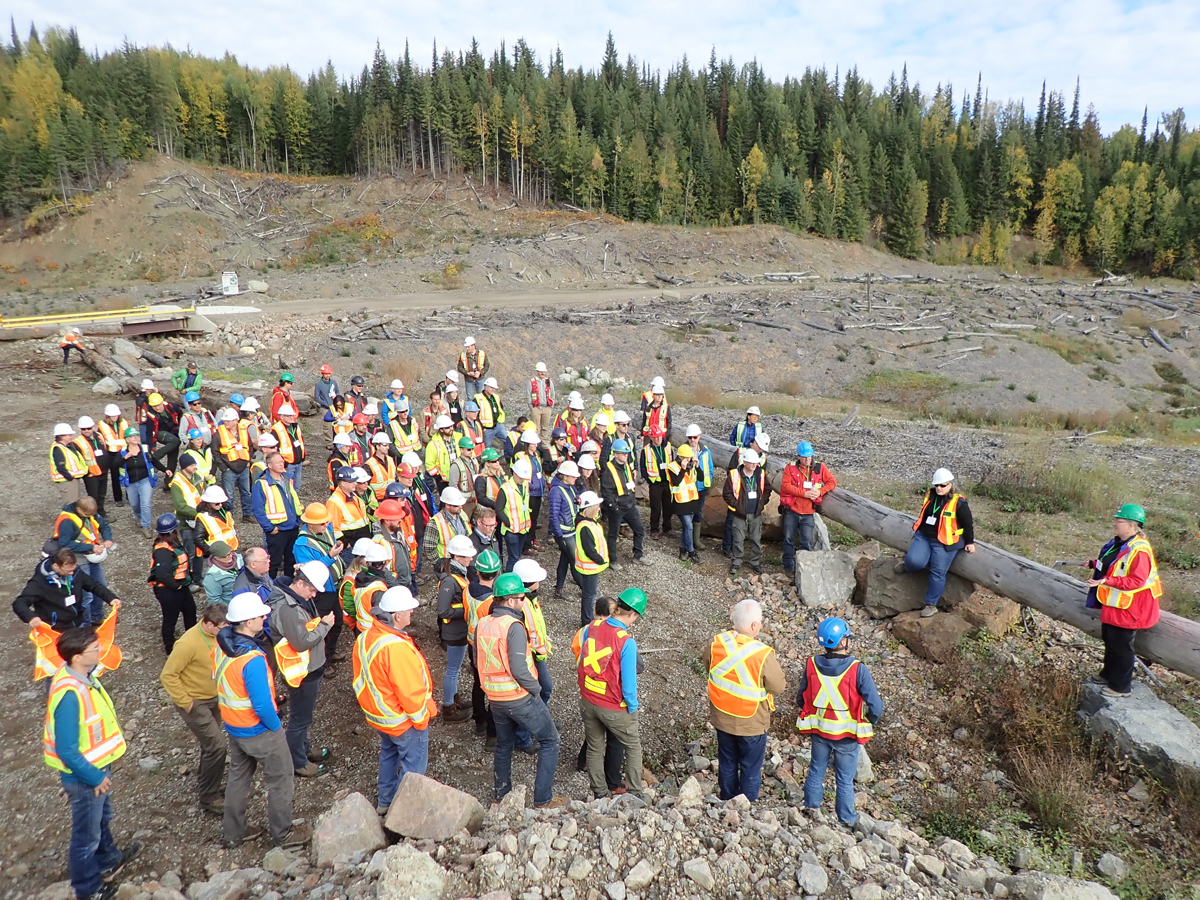 Highlights of the restoration

I’ll list just a few of the highlights of the remediation work undertaken so far.

The mouth of Edney Creek (which is the main creek that flows into Quesnel Lake from the Mount Polley area) was repaired and fish spawning habitat rebuilt by February 2015. This was done as a priority to re-establish a connection for spawning salmon between Quesnel Lake and the watershed that had been damaged by the spill. Kokanee and interior Coho were observed using the channel in fall 2015, showing that the approach the mine took to constructing fish habitat was successful.

The 9 km Hazeltine Creek channel (which before the spill was a very small creek that flowed into Edney Creek before it reached Quesnel Lake) was completely rebuilt by May 2015 to control erosion, and this included removing spilled tailings from the channel. The creek has essentially been running clear since May 2015.

To date, well over 3 km of new trout spawning and rearing habitat has been installed in upper to middle Hazeltine Creek and the work is continuing this summer.

To ensure the success of the 2018 trout spawn, the company also built a rainbow trout hatchery on-site. Eggs were harvested from Polley Lake rainbow trout in the spring, raised in the hatchery and on September 25-26, 2018 the mine released over 11,000 hatchery-raised rainbow trout fry into Polley Lake. The fry were released with the assistance of students, parents and a teacher from Columneetza Middle School’s Greenologists/Enviro Club based in Williams Lake.  This year, lots of rainbow trout were once again observed using upper Hazeltine Creek for spawning and rearing.

The company, often working with its partners from the T’exelcemc (Williams Lake Band people) and the Xat’sull First Nation (Soda Creek Indian Band), members of the Secwepemc Nation (Shuswap people), have done an enormous amount of work on remediating the Hazeltine Creek corridor. Almost all of the tailings have been removed and returned to the tailings facility. Native soil has been added where possible, and lots of organic material has been added to help rebuild the nutrients in the soil to support revegetation.

A planting crew from the Xat'sull First Nation did a major job collecting willow cuttings in the winter of 2014-15, and then returned in the spring of 2015 to plant them as wattles and stakes in the lower Hazeltine Creek floodplain. This was done to provide erosion control and new native vegetation along the creek banks. These willows are now well over 2 metres tall and are still growing rapidly. Lots of other planting crews have also done work on the creek. Over 500,000 native plants, shrubs and trees have been planted to date, many of the seedlings having been raised in local nurseries from seeds collected on site. Some of the native species planted include (in addition to the willows) prickly rose, black twinberry, red osier dogwood, Sitka alder, and Douglas fir. And lots more planting is planned. 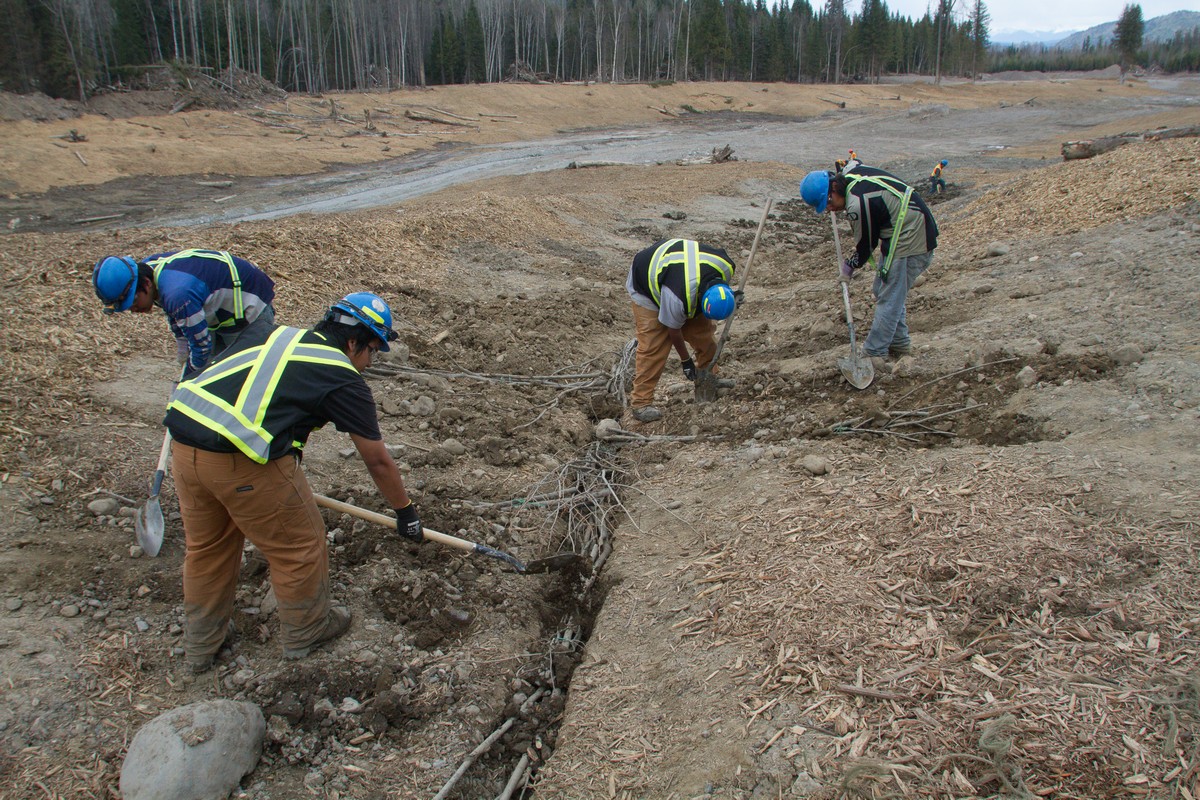 To the untrained eye, photos of the remediation may look like a random mess of broken and damaged trees strewn about on either side of Hazeltine Creek. What they do not realize is that all this woody material was carefully collected by Mount Polley’s remediation team, set aside until the tailings had been removed and the creek had been reconstructed, and then meticulously placed to help reduce erosion, add organic material and provide habitat for birds, small mammals and other animals. In fact, some of the trees were carefully installed upside down, so that the root balls were elevated, forming perching and roosting platforms for birds. 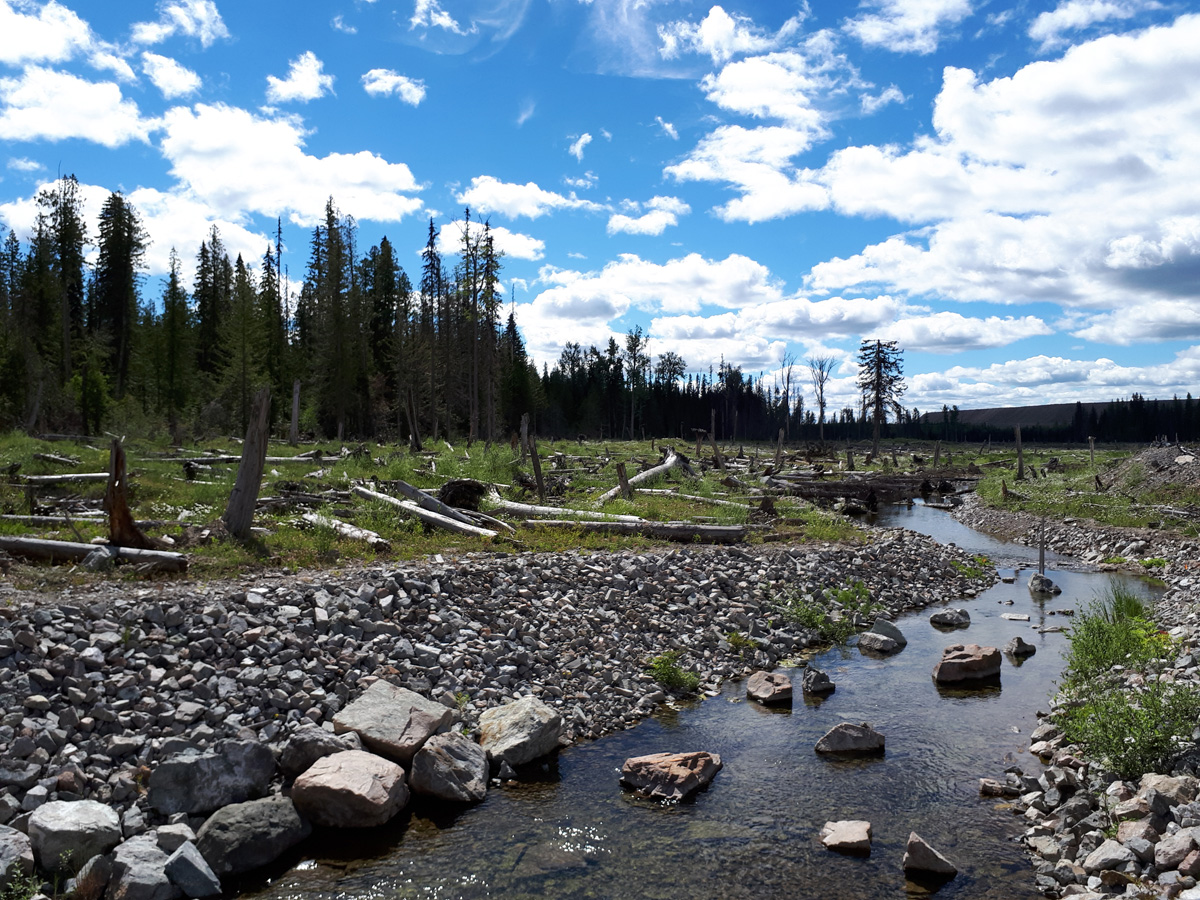 Wildlife sightings are recorded by the environmental team at the mine and there is no shortage of wildlife on the site. Some of the most commonly observed species include black bear, mule deer and moose, with regular sightings of bald eagle, coyote and lynx. Red tailed hawk, Sandhill cranes, swans, grouse, and many other bird species are also routinely observed, and western toad are very common. 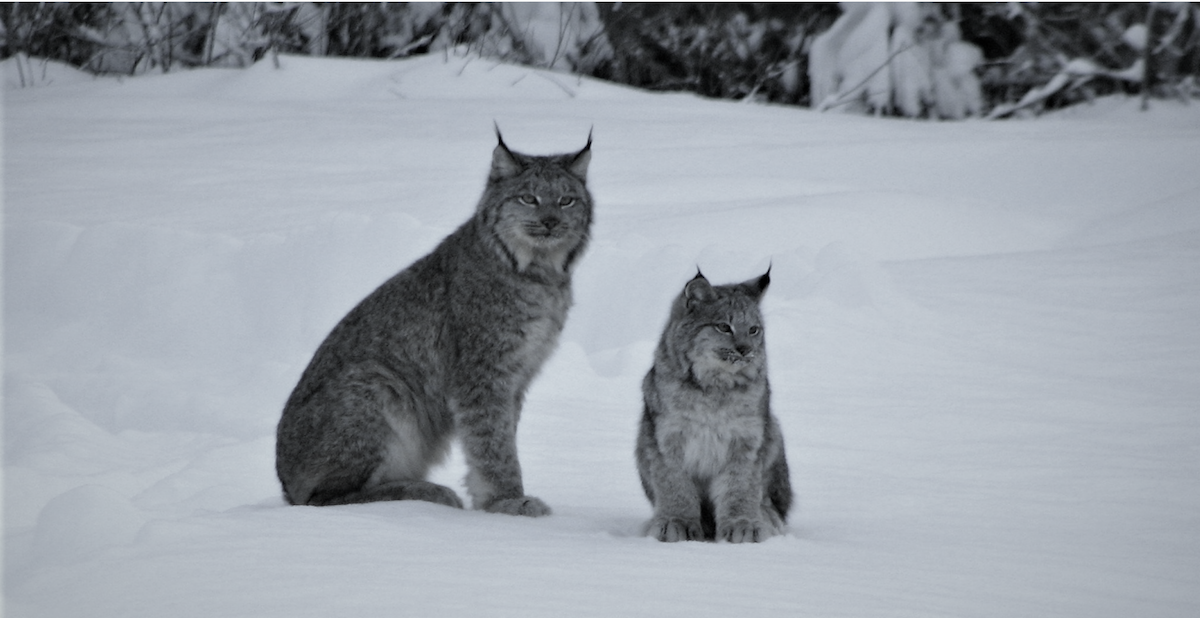 All indications are that the areas impacted by the Mount Polley spill are recovering well. It will no doubt take many, many years until the trees have grown to maturity, but for the forest and riparian areas along Hazeltine Creek that were impacted by the event, and the creek itself, the road to recovery appears to be well underway.

As for the tailings that ended up at the bottom of Quesnel Lake, all the geochemical studies, and the sediment, water and benthic species monitoring, have indicated that the tailings are both physically and chemically stable, and are not releasing metals to the lake water. All water and fish consumption restrictions outside the area of immediate impact (the mouth of Hazeltine Creek) were removed from Quesnel Lake and Quesnel River by Interior Health in August of 2014, within a week or so of the spill. The last restrictions were removed from the area of immediate impact in July of 2015, and there have been no restrictions or notices of concern from Interior Health about the water quality of Quesnel Lake related to Mount Polley since that time.  So, it would appear that the best course of action for the tailings at the bottom of the lake is to leave them there, undisturbed, and let natural lake sediment accumulate on top of them.

This recommendation is supported by numerous studies of fish and sensitive aquatic organism health in Quesnel Lake, which to date have indicated no metal-related toxicity from the spilled tailings, and no mortality of resident fish in Quesnel Lake (lake trout, rainbow trout, kokanee and burbot) was determined to be associated with the spill. In addition, the Provincial government increased the lake trout quota for Quesnel Lake in 2017 (the quota had been reduced long before the spill), and the salmon return four years after the spill (ie the fish that would have been fry in Quesnel lake the year of the spill) was a very strong one. (See 2018 BC Local News article: headline “Sockeye –Salmon Return in Droves to Quesnel Lake Watershed”.

Quesnel Lake continues to be a very popular lake for anglers, with numerous fishing derbies held in Likely and at various fishing lodges around the lake every summer. 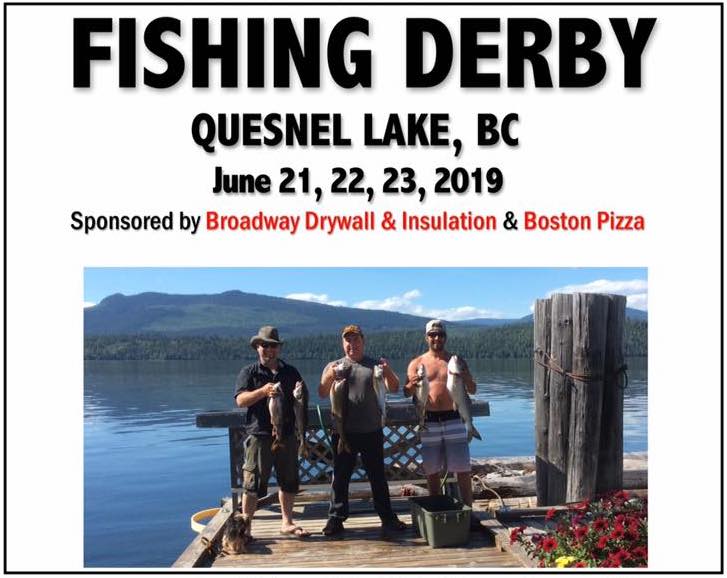 While this tailings spill incident was very unfortunate, and significant in terms of sheer size, the environmental impacts have fortunately not been as dire as many had feared. The chemical impacts have been very low due to the geochemical stability of the Mount Polley tailings. And while the physical impact to a 9 km long small creek was profound, and it will take years before the creek valley has completely regrown, it is good to put this into some context. The land area impacted along Hazeltine Creek was a narrow, linear corridor, less than 3 square kilometres in total. This is undoubtedly much less than the surface disturbance associated with 9 km of the Trans Canada Highway in Vancouver (not to mention all the development on either side of the highway!).

12 August 2014 tweet from Interior Health Authority about #MountPolley and WQ in Quesnel Lake: "Interior Health has no reason to believe that this water was ever exposed to unsafe levels of contaminants from the mine breach". #MtPolley #QuesnelLake

A fish tagging study by BC fish biologists, started in 2013, showed no evidence of fish mortality in Quesnel Lake related to the #MountPolley spill. Source.

In 2018, #MountPolley built a hatchery on-site and raised over 11,000 rainbow trout fry, which were released into Polley Lake in fall 2018 with help from students from Columneetza Middle School in Williams Lake. Source.

A positive path to recovery

The Mount Polley mine has spent the last five years, and many millions of dollars rebuilding and replanting three square kilometres of land in this narrow creek corridor, and installing several kilometres of fish habitat in the rebuilt creek. This work is continuing with more planting, and more installation of new fish habitat this summer. Most of this remediation work was done by local employees and contractors, and the mine’s First Nations partners, all of whom who put in many long, hard days, to fix what had happened. I think it is time that this is recognized and celebrated. The company responsible did not just “walk away” from the tailings spill, rather they put their heart and soul into doing their best to “make it right”, and all the evidence shows that they have succeeded in putting the creek and the lake on a positive path to recovery.

Dr. Anglin was recruited by Imperial Metals (owner of the Mount Polley Mine) after the tailings spill to help with research related to the environmental impacts of the incident and remediation of the impacted areas. She was their Chief Scientific Officer from September 2014 to December 2018 when she retired. She continues to do some consulting work for the company. Prior to joining Imperial Metals, Dr. Anglin was President and CEO of Geoscience BC, a non-profit geoscience research organization.  She has a Ph.D. in geology and is registered as a Professional Geologist (P.Geo.) with the Engineers and Geoscientists of BC. This article reflects her own personal reviews and experience and has not been reviewed or endorsed by Imperial Metals.

In April 2014, Dr. Anglin joined the Resource Works Society as Advisory Council Chair. Her contribution toward broader resource understanding was recognized in April 2019 when she received an award from Resource Works. She is shown below with executive director Stewart Muir (left) and board chair John Turner. 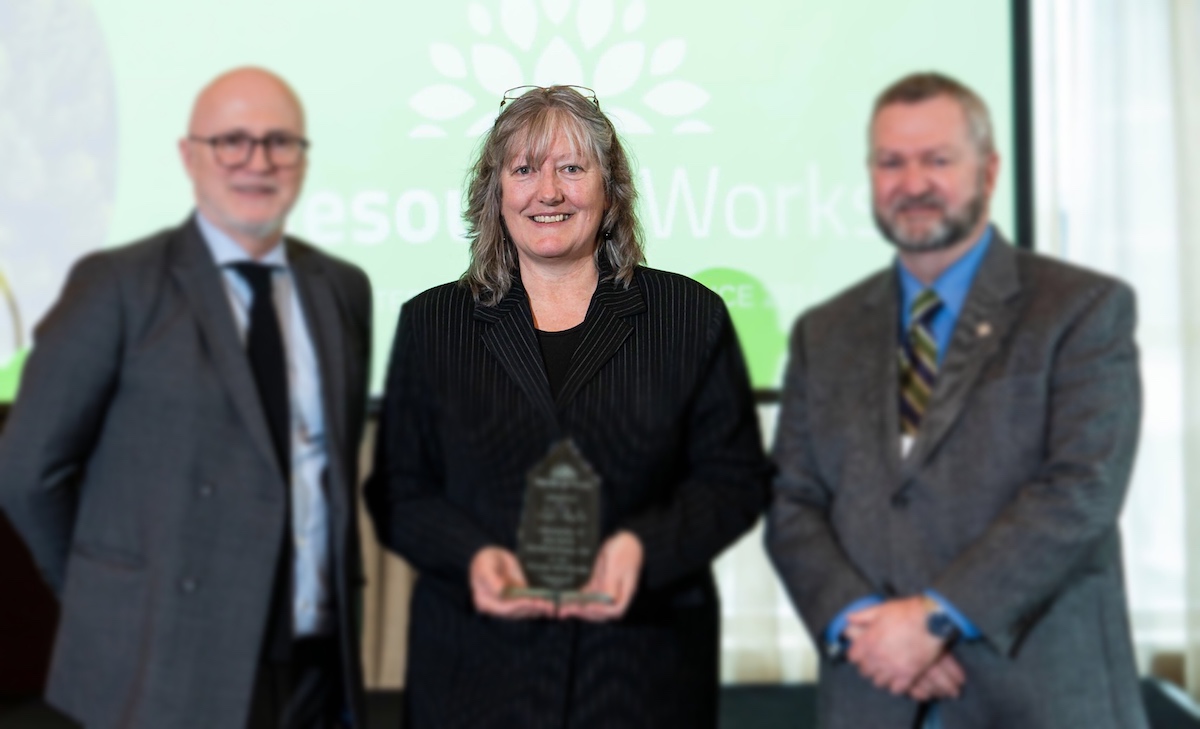