Pressure on for: "We are building pipe."

For those who think the world’s transition from fossil fuels to renewables is going to be easy and speedy, China has a pointed message.

“We are one of the countries with the highest dependency on imported energy from other countries,” said Han Jun, vice-minister of financial and economic affairs, during a visit to Ottawa.

And he strongly underlined that by making it crystal-clear: If Canada wants a free-trade deal with China, it will first have to commit to building an energy pipeline to the coast of British Columbia.

The end result of a trade deal, said Han, would be “a flooding of potash, agricultural products and energy products from Canada to the market of China.”

China is already a partner in the long-stalled Northern Gateway pipeline, and an investor in our oilsands. It is also pressing Ottawa to ease recent restrictions on Chinese government investment in our oil and energy reserves.

Those factors gave rise, predictably, to yet another activists’ campaign: “Stand up to China.”

But there’s a bigger picture: The Canada-China Business Council says a trade pact with China could boost Canadian exports by $5.6 billion by 2030 and create an additional 25,000 Canadian jobs.

We now have a massive trade imbalance with China, the council notes. Our annual exports to China: $14 billion. Our imports from China: $49 billion.

The Chinese demand for energy cited by Han is real enough. China may be moving into cleaner coal power and renewables, and its thirst for oil may have slowed a little in recent months. But the country is the second-largest oil consumer in the world, and is the world's largest net importer of petroleum and other liquids.

And all forecasts are that Chinese demand is only going to go up.

If Han had a pointed message for the prime minister, so did Mayor Craig Copeland of Cold Lake, Alberta, an oilsands centre that is hurting from the current downturn in the oil sector.

The mayor’s message in the Financial Post is also directed at environmental activists:

“We keep beating our oil industry with a stick, and nobody wants to stand up and say, ‘Enough is enough. Environmentalists, pack up your bags and deal with your own neighbourhoods.’ . . .

“We have allowed misinformation, and guys like Neil Young and David Suzuki, to dictate the agenda in Alberta. We have got to get it back, and the only way is for federal and provincial politicians to say, ‘We are building pipe. Let’s go.’”

The lack of pipelines and progress on them caused columnist Claudia Cattaneo to write in the Financial Post: “Canada will continue to get a lot of its oil from unsavoury regimes such as Saudi Arabia and Nigeria, instead of hard-working towns like Cold Lake.”

That was well noted on Facebook by Oil Sands Action, with this cartoon: 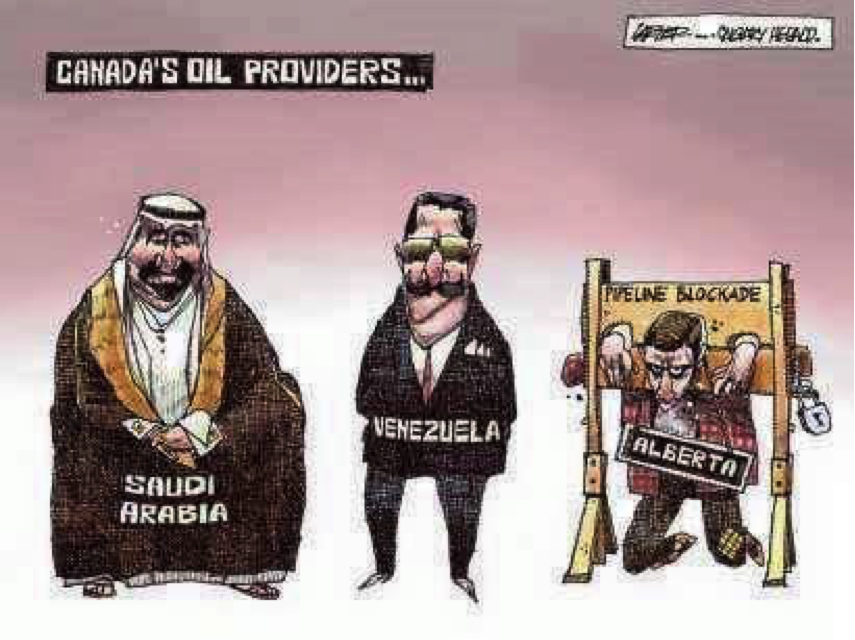 Along with Mayor Copeland, we’re waiting to hear if he is indeed going to take a deep political breath and say: “We are building a pipe.”