It's time to explode the carefully nurtured myth that British Columbia residents are opposed to the Trans Mountain Pipeline Expansion and Site C. That just ain't so, according to a new poll from the Angus Reid Institute.

Residents of the province are a practical bunch, and when it comes to building long-lasting energy infrastructure they have some pretty clear ideas of what they want.

Check out the table below. It shows the poll's findings on three important energy topics: 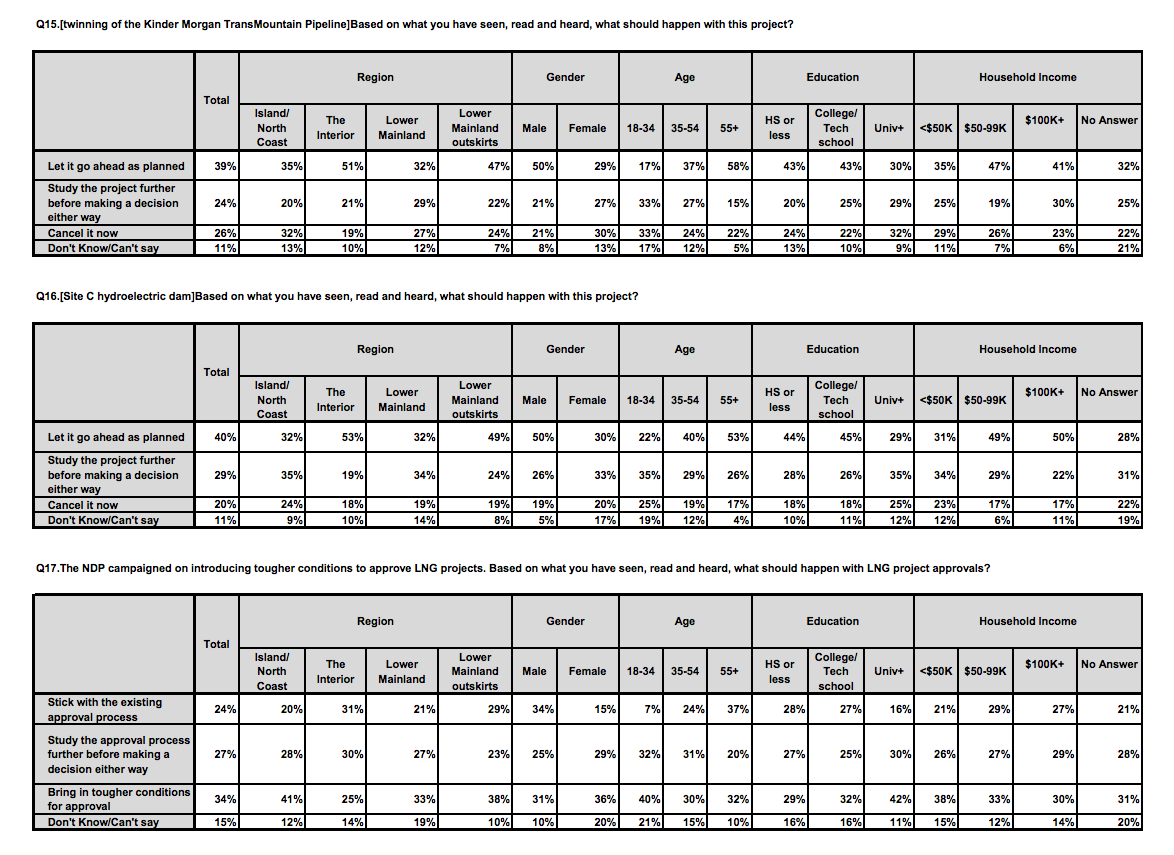 These three topics hold meaning for those who are working to do their best to serve people and the environment at the same time.

The Trans Mountain Pipeline Expansion means not just short-term construction benefits. It will also strengthen Canada's ability to "pay the rent" as a nation, because it will enable us to get fair value for our crude oil exports that are so essential.

The news of strong support for this pipeline project isn't too surprising, since past opinion surveys have confirmed this broad base is genuine.

Still, the timing of this poll, at a moment of government uncertainty in BC, should be a wakeup call that we need to work together to do safe, quality projects. Those seeking to divide British Columbians on this issue have not been successful.

The world will still be consuming oil decades from now, and if we can get Canadian oil to global markets via this new pipeline, the world will be enjoying among the cleanest and most responsible barrels on the market.

On the topic of Site C, a couple of years ago the BC public when polled was very strongly in favour of this hydroelectric project.

Yet, despite its many merits, Site C has also attracted a laundry list of grievances.

This new survey suggests that even though there has been a significant rollback of the early support, a solid 40 per cent of us still want it want the project to go ahead as is. Only half as many would scrap the project.

The reason for such a high level of support seems fairly obvious: We know what clean energy is, we know what renewable energy is, and we know that energy use over time goes up not down.

It seems to be a waste of breath trying to persuade residents that we won't need clean, renewable, affordable, abundant electricity in future. Once again, reasonable people should be working towards unity.

Here's a call to action: let's park the fear-mongering and the malevolent distrust of all authority that seems to have driven the anti-Site C campaigns thus far.

When it comes to the third question, which involves LNG, it looks like the industry will need to continue its work of reaching citizens who have questions and maybe have been hearing from alarmist opponents making often preposterous, but still scary, claims about safety and other issues.

However, it's well worth noting the positives here. The poll suggests that residents want to see more study of the approval processes for LNG.

If confidence can be built up as a result of finding and solving any shortcomings, there is every reason to believe that the generally resource-aware BC resident will in time see the benefits of increasing our maritime exports of a safe, climate-positive, job-creating fuel product like liquefied natural gas.

Those who are truly committed to global reductions in harmful climate emissions should also be the ones who are also most forcefully supportive of LNG. It's time for more BCers to get with the program and stop resisting progress on climate change by fighting LNG exports.

Overall, this poll is very encouraging. It shows that residents instinctively understand that a thinly populated country like Canada must, to succeed, use its natural resources resourcefully and responsibly.

The tables are from a recent Angus Reid Institute survey conducted in British Columbia.
Click here to download the table shown above