Rewriting the rules for radicals

Fresh hope for a pandemic playbook for 2021 that will help guide the Canadian energy sector out of today’s doubt and uncertainty.

Canada’s most valuable single natural resource asset today is the Athabaska oil sands. Since the identification during World War II as having strategic economic potential, they have led to a positive transformation in the nation’s standing and prospects.

The accelerated development over the past several decades of workforce, financial and regulatory capacities, together with a vast array of technological innovations, allowed all Canadians to benefit every day from the immense value unlocked by a world-class energy deposit. The rules in place to ensure these benefits would be brought about safely and responsibly are indisputably among the best anywhere in the world, resulting in Canada’s favourable standing in numerous sustainability metrics.

It’s true that a significant portion of Canadians feel doubts about whether the oil sands are a good thing. It’s no mystery why this is. At every turn, they see advertising campaigns and pressure groups decrying the resource. Environmental, social and economic rationales galore are provided. It’s certainly true that there have been issues, and in response there has been abundant regulatory and industry action on all of them. Yet no sooner is one thing resolved than two more are brought forward to replace it. In 2020, it is pretty clear that opposition to the oil sands is less about the existence of solvable problems, and more about the insatiable need on the part of resource opponents for ways to refresh the polemic.

It must be quite obvious to strategic thinkers in other nations that one of Canada’s grandest energy gifts – a vast but geographically well-defined and high-profile energy deposit – has its vulnerabilities. Those aerial views of large oil sands mines are a case in point. When artfully presented to the viewer, they create the kind of emotionally charged response that is a fissile element for political activation. Though they account for a minuscule fraction of global emissions, you’d think based on what some claim that the oil sands are an exponentially greater source of greenhouse gases than they actually are.

As Prime Minister Justin Trudeau himself has pointed out, no country on earth with this same advantage would fail to develop it.

Let’s look ahead into what the coming year 2021 might hold.

Strategic thinkers around the world know that future uses the world makes of responsibly produced Canadian crude oil will be ones that are innovative and sustainable, because energy-importing countries need the unique qualities of hydrocarbon products as much as they need to manage the impacts of their use. The problem remains how do we get that oil to those markets given the heavy weight of ideology that has been constructed to thwart Canadian ambitions.

Over the next decade, important steps must occur to ensure that the supply of non-renewable crude oil begins to attain its highest end use. The years of handing this precious resource to the United States for less than it is worth must end. There is no way in which this practice is defensible. The only way to change this situation is to get the oil to other markets so that global market pricing determines its value, and this is why pipelines are so important.

Much of the ongoing critique against the oil sands amounts to the manifestation of a strategic chess game between Canadian governments (at all levels) that are depending on the orderly development of the resource for the public good, and a variety of oppositional interests. The contrarian arguments are many and they evolve constantly but the goal remains the same: to contain or even reverse the success of monetizing, in the public interest, one of the nation’s most important strategic assets.

Oppositional tactics include creating the appearance of public unease with the oil sands; leveraging this into acts of self-harm by governments through placing short-term political ambitions ahead of the public interest; and methods of internationalizing the results into external actions, all of it inside the grand strategy of keeping niche player Canada out of global energy markets.

A lot of the problem is simply because Canadians are not educated about the nature of the oil sands, nor on energy itself. They might be supportive enough, but are likely to shy away from debate or feel on the defensive. It’s not just the average person who would benefit from gaining more knowledge. I’ve lost track of how many times I’ve encountered an officeholder responsible for significant decisions who has little knowledge about energy issues and next to no research capacity close at hand, and even less free time, that might help them to independently establish the facts.

What can Canadians who care about both the environment and the economy do in 2021 to resolve the impasse? As one such individual, I am familiar with the feeling of powerlessness in the face of socio-political movements that have abandoned reason in the search for political power. This is at the heart of the malaise. Believe it or not, despite this I remain an optimist.

We can take it as read that in the never-ending campaign to delay and derail anything to do with the oil sands, a “total war” mentality on the part of pressure groups will continue to prevail. When will we see concomitant action by those who prefer: more rather than less national energy security; better ability to manage a national trade balance that would be a disaster without crude oil exports; more rather than less use of responsibly produced, high-ESG Canadian products in markets where they are competitive with the misery oil of the world’s most environmentally careless petro-dictatorships; and some modest reward for those countries like Canada that continue to accelerate their overall product improvement?

All of this has led me to examine with skepticism most claims made about the oil sands. More often than not, my doubts prove to be valid. And as an optimist with a glass-half-full perspective, it appears to me that the protracted COVID-19 pandemic, and the economic pain that we have only had the first taste of, will put more people into listening mode in 2021. Seizing the opportunity means understanding what’s really going on. The starting point for this is the work of American community organizer Saul Alinsky, whose seminal 1971 book Rules for Radicals not only provided operational logic for generations of activists. It also set the foundation for the pressure group campaigns that have been so successful in tying up Canadian social and economic aspirations. He identified a number of rules.

Recognize anything? Of course you do. The rules provide a flexible logic that in the past five decades has proved durable for all kinds of different radical actions. Designed for socialism, they were quickly taken up by environmental radicals too. When you take this list and parse all of the actions taken to thwart oil sands success you’ll see multiple Alinsky rules threaded throughout.

Those employing these rules through pressure tactics have enjoyed outsized success, thwarting probably hundreds of billions of dollars in lost opportunity for Canada while doing precisely nothing toward the claimed goal of global environmental protection. Pressure groups opposing the oil sands have so thoroughly internalized Alinsky-think, it’s probably second nature by now.

I’ll bet if you were in the habit of applying an “Alinsky test” to the various oppositional manifestations, you’d see that two or three of these rules at a minimum are always at their heart. We should understand this as a classic underdog approach. The emerging difference is that today, the oil sands have become the underdog, even though they are on the right side of history. And there is hope - in ways that Alinksy himself would have to acknowledge. 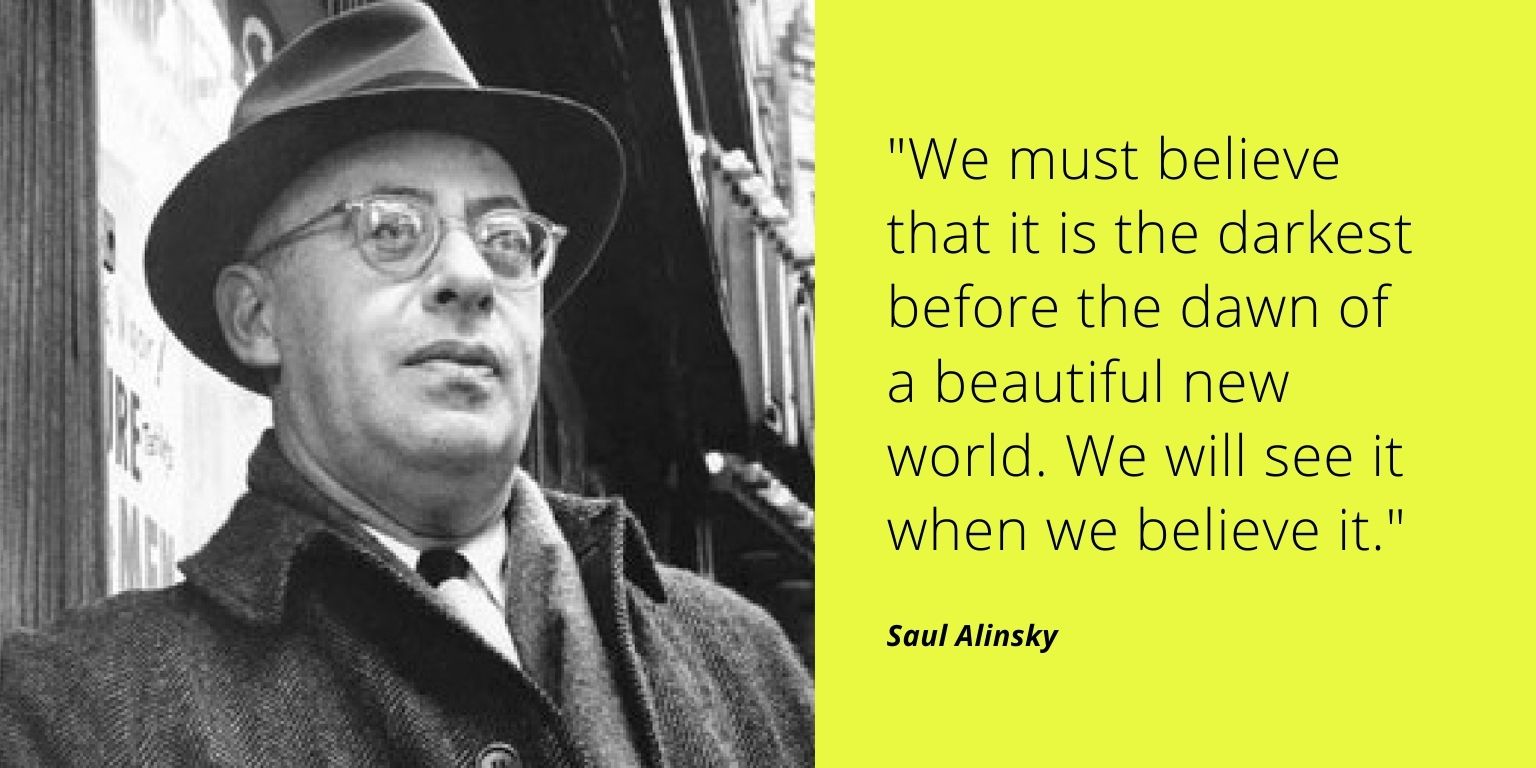 Understanding this arcane set of rules is the first step to seeing how conditions can be shaped by deliberate strategy. The next step is to consider what inspiration they might offer in developing better outcomes.

As the pandemic grinds on, 2021 will be a moment of opportunity for us to start being inspired by the success that is possible by embracing winning principles that promise, for a change, to advance rather than undermine the national interest. An improving, beneficial, high-value resource is, at a time of global uncertainty, well worth fighting for. Looking ahead, we will be asking how to empower the coming reset, knowing that it is one driven by realistic innovation in a direction that is good for people and for the environment.

To borrow a line made famous by British Columbia’s chief health officer Bonnie Henry, the immediate future offers Canada’s emboldened energy people the chance to be kind, calm, safe – and empowered to succeed.

Stewart Muir is a Canadian journalist, historian and advocate for responsible natural resource development. He founded Vancouver-based Resource Works in 2014.