REALITY CHECK: What comes after coal?

News from Ottawa that coal is going to be phased out for Canadian electricity raises the question – what will replace this energy source? 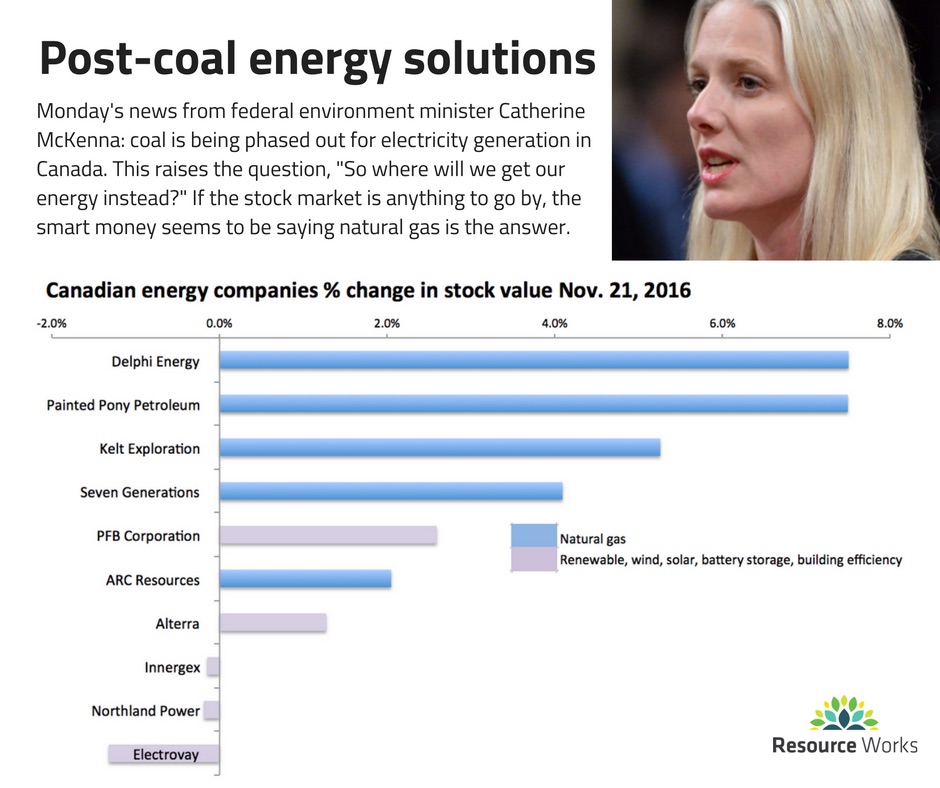 As countries work to reduce their greenhouse gas emissions, the most common story of our times involves natural gas replacing coal because gas produces less pollution.

Judging by the performance of select energy stocks on the Toronto Stock Exchange on Monday, Nov. 21, the Canadian decision will create an increased appetite for natural gas over other alternatives.

In the United States, a large scale shift is underway from coal toward natural gas.  In 2015, according to the U.S. Energy Information Administration, "energy-related carbon dioxide emissions were 12% below the 2005 levels, mostly because of changes in the electric power sector.

"Many of the changes in energy-related CO2 emissions in recent history have occurred in the electric power sector because of the decreased use of coal and the increased use of natural gas for electricity generation."

Will Canadian utilities follow the example seen south of the border (and widely elsewhere), and move heavily into natural gas with additional investment in a basket of other solutions?

We seem to be leaning that way.

Investors in publicly traded energy stocks showed a definite preference on Monday for natural gas over renewables and related companies. With natural gas companies rising as much as 8 per cent on the news, for a number of renewable companies like Northland Power the day brought a small decline. The implication is that natural gas exploration and companies are suddenly more valuable, and should carry a higher price, because demand will rise for their product.

One day of stock trading does not a trend make, however. No doubt we'll be hearing much more about other reliable energy options such as nuclear and hydro, as well as from intermittent advocates who believe wind and solar should feature more prominently in our thinking. And some of the escalation in the western Canadian gas producers sampled here may be due to the fact that their increased 2017 drilling plans, being talked about recently, amount to a smart-money bet on Canadian LNG exports taking off before too long.

Those interested in serious study will of course be taking a longer and more nuanced view of their own before making any investment decisions. However, news does have a way of flushing out market sentiment. If that is the case here, it seems clear where the sentiment lies of those with capital actively deployed in energy investments. Natural gas is a proven and dependable energy source that produces some negatives but much fewer than coal, and this likely helps explain the investor perceptions at work on Nov. 21.