Reality Check - Forest jobs have been recovering for half a decade

Latest data from BC Statistics shows forestry jobs in the province are close to breaking through the 20,000 level for first time since the global financial crisis hit in 2008. With softwood lumber now an issue, Stewart Muir reveals what the employment numbers mean.

In 30 years of employment data, the British Columbia forest industry has not seen a winning streak like in the five years to 2016. 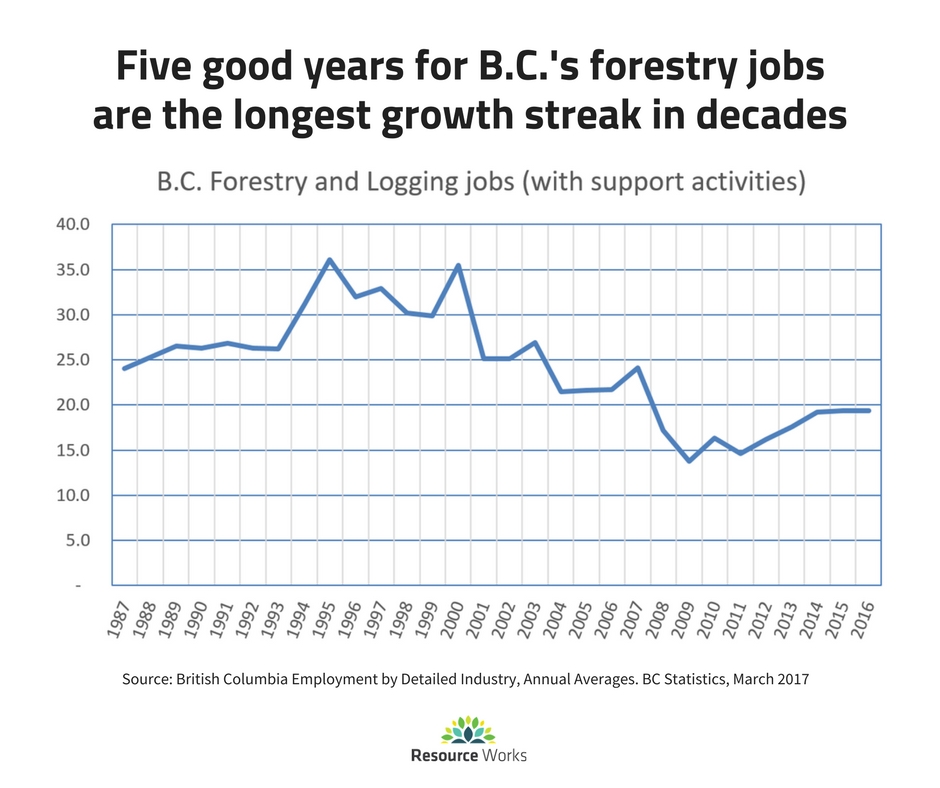 Impartial information from BC Statistics shows that nearly 20,000 jobs now exist in forestry and logging, not counting an extensive secondary workforce in manufacturing, administration, transportation and various other goods and services activities.

It has been a talking point for one political party in the current provincial election campaign that forestry has shed 30,000 jobs, an assertion not backed up in the numbers from BC Statistics. In actual fact, the number of jobs lost is about 5,000 in the past decade and a half.

That said, it's true that from the modern-day employment peak of 36,100 in 1995, the current level of 19,400 is indeed a steep fall-off. The War in the Woods of the 1990s was a major factor in this decline. The next downward leg in the early 2000s came amid a protracted disputed over softwood lumber with the United States. In a short time, an estimated 15,000 workers were laid off mostly in British Columbia because of the dispute. Since that time, there has been a lot of investment in modernizing saw mills.

The downward elevator ride of 2008-09 easily rivalled the softwood war's impact, reflecting the collapse of housing construction in the United States. Fortunately, unlike the previous calamity, this one was succeeded by a lasting recovery.

In recent years, the steady growth in jobs has been accompanied by continued market diversification, emphasizing Asian markets especially China. This has included not only lumber products but also a relatively small share of logs. A sure way to reduce the number of logging jobs would be to follow through on threats to reduce log exports.

Of greater concern is the risk for smaller lumber manufacturers especially in the Interior, who are said to be at greater risk than large diversified companies that have been working over the years to insulate themselves from the effect of a single disruptive factor.

Stewart Muir, executive director of Resource Works, is a former journalist who as Vancouver Sun business editor covered the U.S.-Canada softwood dispute that commenced in 2002 and concluded in 2006.