Here's the latest evidence that natural resources are growing in importance

The resource economy is a thing of the past? Not so fast. New data from the British Columbia government proves the opposite.

And the British Columbia Natural Resources Index created by Resource Works shows that the dollar value – $6,727 per resident – is the highest in the 10 years for which we are tracking data. 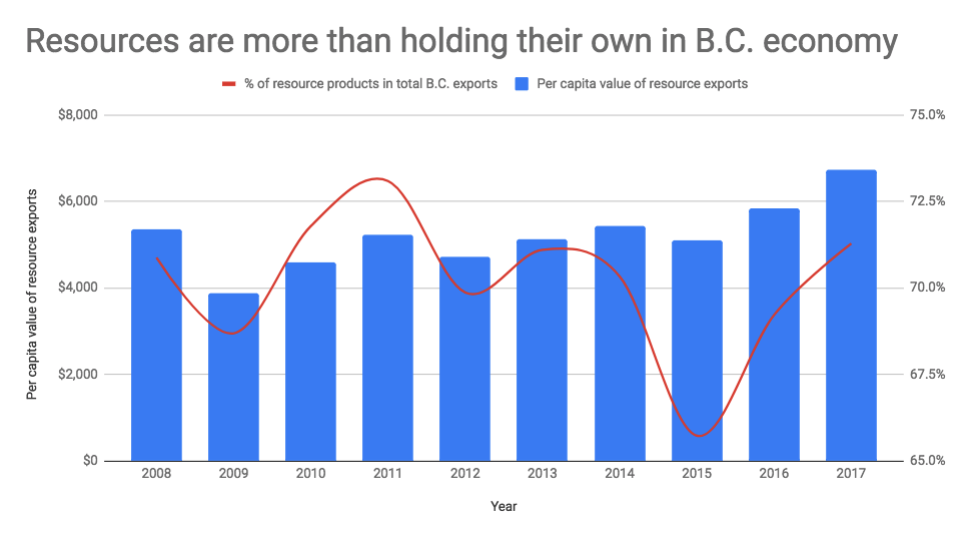 Yet some are fond of declaring that we are in a new era of technology and innovation that means the "old", resource-based economy needs to slink away. Could that really be true?

Just last week, delegates to the Union of BC Municipalities convention in Whistler heard the leader of the BC Greens, Andrew Weaver, declare that Kitimat should have a Tesla Giga factory instead of natural gas export capacity, and that jobs building pipelines are not only "hypothetical" ones, they are also trivial in number.

Of course it would be fantastic to see Kitimat's strategic position on the coast, and adjacency to a world-class transportation corridor, give rise to major manufacturing investments. For the time being, however, the investment opportunities that we have in hand in the north west are almost exclusively ones related to resources and transportation.

Yet it's also true that aspirations toward a better future are very much part of what resources mean for British Columbians. Minerals will be needed for clean energy transition ahead. China is urgently seeking lower-carbon, proven fuel solutions for its energy needs, and it is looking to Canadian resources as part of that solution. Forestry, as a source of renewable materials, has a secure niche in the sustainability mix. And aquaculture, one of our best resource opportunities, is needed to feed a growing world.

Some other observations from the latest data, which was updated in August with the release of 2017 information:

The data used for this analysis can be seen here.