Understanding the true power of natural resources in our economy

When everything goes right and a major resource project moves forward, the benefits flow for decades. Stewart Muir explains why this is. 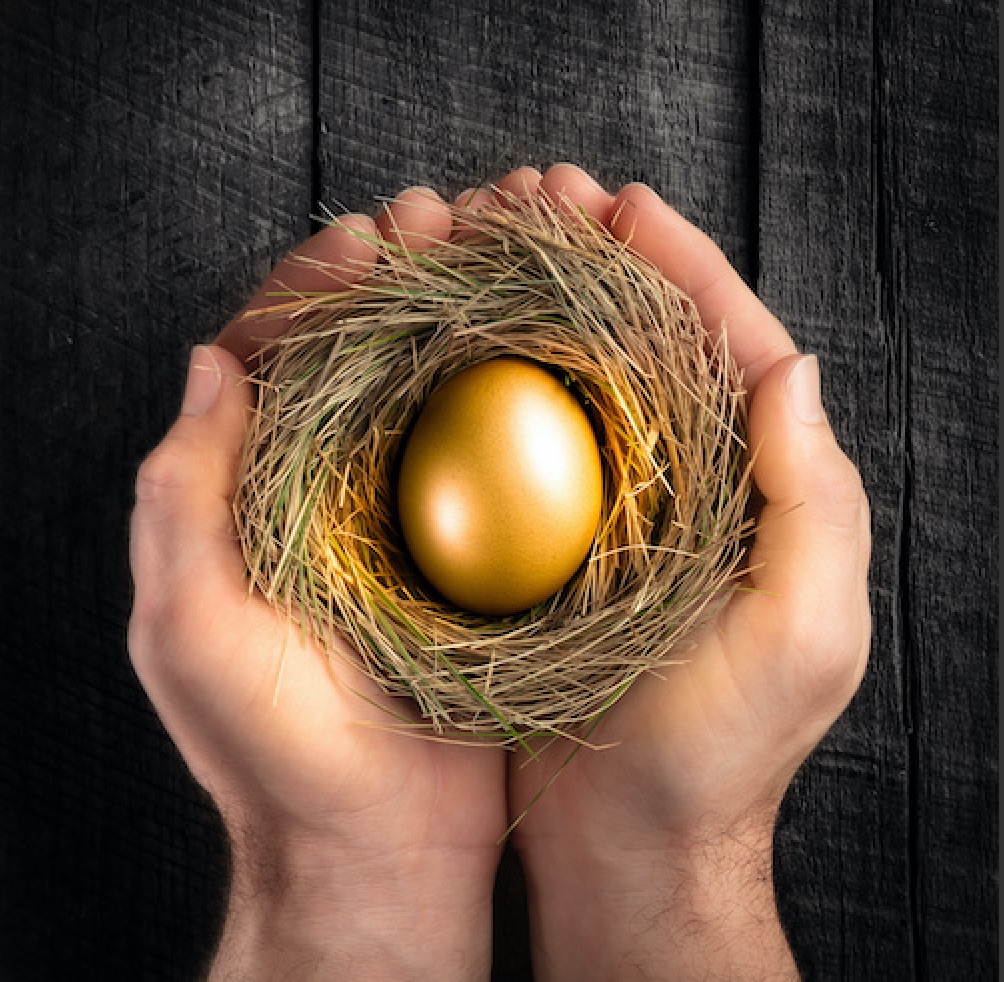 If you follow the progress of large natural resource projects, it's pretty obvious that a lot of money has to be spent to bring them about. Plans need to be made and accepted, foundations must be excavated and poured, wells drilled, linear infrastructure corridors built, marine terminals created...the list goes on and on.

In the case of British Columbia, over the past 25 years, $131 billion was invested into natural resource sector capital projects. (Source: Financial & Economic Review, "Capital Investment by Industry" 1996-2020 compiled tables.)

This doesn't even include the supporting role of capital investments in transportation, manufacturing, construction and utilities, without which resource projects could not be brought forward.

In a spectacular year like 2020, in which four major energy-related mega-projects are going on concurrently in B.C., the combined total capital spending intentions for resource industries plus all of those other categories is $27.2 billion.

Can you imagine what the B.C. economy would look like in this pandemic year if it wasn't for that amount of spending sloshing around the economy?

For those who are uneasy about Canada's reliance on its resource economy, this has always been problematic. Whether it's the trade skeptics or the innovation scoffers, it's hard to pretend that something is irrelevant and should be done away with, when it clearly has such an outsized impact on the economy.

Here's something to keep in mind when examining the strategies employed by pressure groups that seek to prevent investment from connecting successfully with responsibly regulated Canadian resource opportunities.

The standard critique has been to sidestep the presence of capital spending, and focus instead on direct employment, or on royalties paid to government.

This does appear, at first, to be a weak point. The end result of deploying resource capital typically is in very high labour productivity, so that a relatively small number of workers produce much greater GDP impact than the average worker. So critics can say, aha, where are all those jobs you're talking about? (There are actually a lot of indirect jobs too, except they are distributed around the economy in ways that can be challenging to spot.)

"Why is it that the natural resource economy represents only about 12 to 13 percent of the national economy," he asks, "but about one half of the business investment intentions?"

The answer is pretty simple: "Because natural resources require huge investments up front, with a payback period measured in decades."

Crowley says that in order to play in the resources game, "you have to spend billions and billions up front on a mine, oil sands plant, LNG terminal ($40 billion for the west coast’s LNG Canada project alone), or pipeline, and then hope that the price of the commodity and all the other uncontrollable variables come together over thirty years to allow you to recoup your investment."

One of the ways that governments benefit when that process is successful is through royalties. Unfortunately for B.C., the past five years have seen low commodity prices for oil & gas, and this has meant low royalties to government. For critics, this raises the question of whether it's really worth all the alleged social and environmental strife for such a pitiful return.

Would it be desirable for B.C.'s gas royalty revenues to be much higher, like they were back in the mid-2000s during a period of soaring commodity prices? Of course. With persistent low prices it may be a long time before we see such days again. But to focus merely on their current status ignores not only the many other benefits of resource investment, such as the upfront capital flows, but also the intricacies of royalties themselves.

To understand why, look no further than the attempt by U.S.-based Stand.Earth to persuade British Columbia residents that there is a massive giveaway of public resources to "corporate polluters". The group's Vancouver office has issued a report stating that the province "has become one of the most generous subsidizers of oil and gas in Canada." Why? Because B.C. has incurred nearly $3 billion in outstanding royalty credits from natural gas producers, resulting in the allegation (made amid a provincial election campaign) that this liability reduces public revenues for the future while encouraging the use of fossil fuels.

This is misleading. You could even argue that Stand.Earth has the whole thing back to front. Natural gas investment has become a generous subsidizer of government, not the other way around. In the act of building the infrastructure for royalty-producing gas production and export, the gas industry first of all had to expend billions of dollars in capital investments, much of it consumed by paycheques and a local supply chain.

Drilling credits, specifically to encourage wells to be drilled in certain areas of the province's Montney Shale region to support LNG and other gas development, have been a routine instrument used by the provincial government to direct resource developments. Abolishing these would ensure that capital investments would not be made in B.C., and perhaps that is really the point of the exercise. If Stand.Earth was as concerned about public finances as it professes to be, they'd be saying: go on, let's really stick it to industry by squeezing them for every dollar we can – let's see you dangle in front of them more of those deep well drilling incentives that by deferring small amounts of hypothetical future revenue will cause billions of dollars to be invested into the province today.

If you were looking for a proven method of using a public fiscal instrument to create vastly outsized gains for the general benefit of residents, the drilling credit method is hard to beat. If your goal was the exact opposite, you would join Stand.Earth in opposing the sytem.

Examination of the full fact set shows why the royalty credits are the very opposite of a subsidy.

Royalty credits only apply to wells that are put into production.[1] The program was refined after 2013 to deal with concerns about escaped revenue, so that credits would only apply after a guaranteed 3% or 6% minimum royalty based on category was paid to the provincial government.

What we don't hear much about is what benefits were created through those $2.9 billion worth of incentives. Recently, information came to light that allows this to be understood. According to government data, between 2005 and 2019, those credits resulted in $84 billion worth of investment and revenues to the province of $20 billion, for a total benefit of $104 billion. 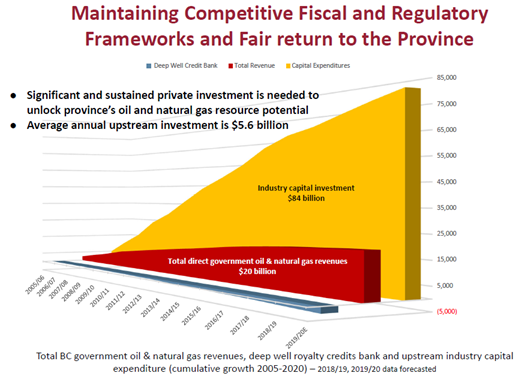 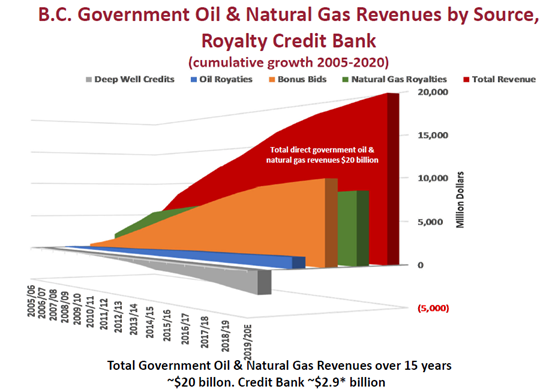 A $2.9 billion investment that draws in $104 billion in combined capital investment and revenue flows: in what universe that not a massive bargain for taxpayers?

Consider the large subsidies and tax breaks that governments are willing to offer to land an Amazon hub, attract a renewables project, encourage the uptake of zero emissions vehicles, or spur a supermarket chain to install more efficient refrigerators. In terms of both ratio and scale, there's no match for how this investment incentive lever has performed.

And there's this to consider: had the deep well royalty credit program not been introduced, those wells might have been drilled – just not in British Columbia. The activity would have gone to the Alberta side of the Montney formation.

Are fossil fuel subsidies a real issue? Sure they are, and there is also plenty of evidence that in this sprawling topic, significant progress has already been made to correct the situation.

It should be clear by now that the Stand.Earth campaign to position the deep well credit program a certain way is, in reality, a tactic to advance the group's higher-level goal of stopping cleaner British Columbia natural gas from reaching nations that need it to reach their Paris climate targets.

As for why an environmental group would want to pursue such a goal, who knows, but the "end fossil fuel subsidies" bandwagon provides a tight, emotionally charged slogan that comes pre-chewed, requiring no deep thought.

A more fitting (but admittedly more boring) motto for true climate progressives would be: "Make sure all fossil fuel subsidies are as efficient as B.C.'s deep well royalty credit program."

Recovery from the fiscal and societal earthquakes of 2020 is likely to take decades. Who knows, we might soon see rising support for the kind of visionary projects that create intergenerational benefits.

Stewart Muir has been analysing British Columbia natural resources for more than 20 years as a journalist and commentator. He is executive director of Resource Works.

[1] There is a side issue here relating to royalty credits that are not claimed due to wells that aren't capable of production or have poor production profiles. If those credits are never going to be used, they should be cleared from the balance sheet rather than sit there allowing critics to claim the size of the alleged issue. However, this is an accounting problem not an economic one. It would be a smart idea for the provincial government to do something about this, as it would allow the claims to be considered in their proper context.