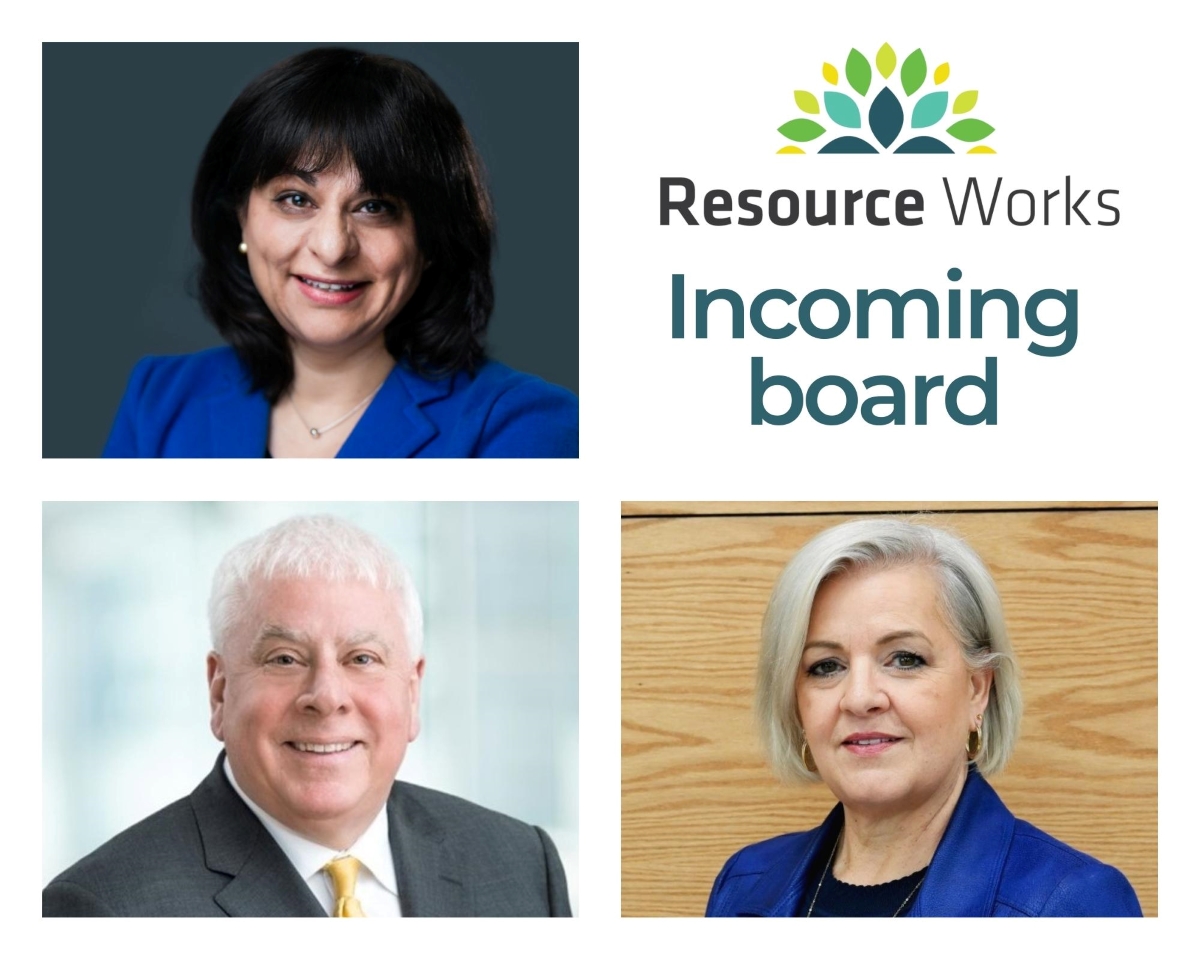 After a decade of research and fact-based dialogue about responsible resource industries, Resource Works is announcing the addition of new Board members and staff, reflecting the cross-Canada scope of its research and communications outreach.

“I have been privileged to work with John Turner on Resource Works governance, and I am committed to continuing his legacy of focusing on the importance of research and science in important public policy debates.”

These Board changes will be ratified at an upcoming Resource Works’ Board of Directors meeting September 27. The meeting will be followed by a public lunch with Peter Tertzakian, an energy specialist, economist and bestselling author. Find more information about and tickets for that event at this link.

The updates to Resource Works’ board and staff include (see full bios below):

Resource Works also recently wrapped up the second season of the ForestWorks radio show and podcast. The unique society is also the engine behind Green Growth BC, an initiative to research and share fact-based science about forestry in BC.

Resource Works operates across Canada, with its head office located in Vancouver, on the traditional territories of the xʷməθkʷəy̓əm (Musqueam), Sḵwx̱wú7mesh (Squamish), and səlilwətaɬ (Tsleil-Waututh) Nations.

Founder Stewart Muir said Resource Works was initiated in 2013 with a focus on British Columbia, setting out to fill the need for independent research and perspective in the critical debate about our resource industries and economic future. “A decade later,” he adds, “we have matured into a nationally known voice of reason and factual information about the industries foundational to Canada’s well-being.”

The newly appointed managing director Margareta Dovgal adds that “Amidst a global energy crisis, it could not be clearer that responsibly-produced natural resources underpin both Canada’s security and that of its allies.

“Resource Works will keep sharing with Canadians the ways our resource industries are critical solutions providers – and we’ll continue advocating for good, evidence-based policy that reflects our leadership on clean technology and innovation and the sector’s role providing the economic firepower for Canada’s investments in cross-sectoral climate mitigation and adaptation.”

Resource Works’ mission is to reignite the promise of Canada’s economic future by leading respectful, inclusive and fact-based dialogue on natural resource development. It communicates with Canadians about the importance of the country’s resource sectors, including mining, forestry and oil & gas, to their well-being. Its programming seeks to demonstrate how responsible development creates jobs and incomes throughout the country, both directly and indirectly, enables economic reconciliation and supports energy transformation and climate resilience. The Society explores the long-term economic future of Canada as a place that depends on the clean and responsible development and transportation of its natural resources.

Mina is a public affairs consultant, based in Vancouver, BC. She has worked in in public affairs in BC for more than two decades, in a variety of industries, but with a focus on working with sustainable resource industries, capital infrastructure projects and with companies that work to connect and grow the provincial economy both in regional and urban communities.

Mina served as Vice President, Public Affairs at the BC Council of Forest Industries (COFI), and with the BC Lumber Trade Council until 2019, and was responsible for public and government affairs. Prior to joining COFI, Mina served on the leadership team of BC Hydro’s Site C Clean Energy Project leading multi-year, public and community consultations during the development and regulatory review stage of the project. In addition, through her work at Partnerships BC and as a consultant, Mina has worked with a number of capital infrastructure projects across the province.

Mina holds a Bachelor of Arts from the University of British Columbia and studied French at Laval University. She was awarded a Silver Leaf of Excellence by the International Association of Business Communicators (IABC) for a communications campaign for the merger of two financial institutions.

Lori was first elected to Fort St. John City Council in 2005 and then mayor in 2011. She is retiring from council in the upcoming election after serving three terms as mayor. During her tenure she was an advocate for energy literacy, bringing a common sense, fact-based approach to provincial and national discussions about natural resource development. BC Business Magazine named Lori one of the Top 35 Most Influential Women in BC in 2016, while the Energy Council of Canada named her the 2019 Canadian Energy Person of the Year. Her knowledge of the resource sector was drawn from her work in northern BC and also four years spent working in small communities in Peru with the Sustainable and Inclusive Communities in Latin America Program.

A regular volunteer with Scouts Canada and other organizations, she received the Queen’s Jubilee Medal in 2002 and 2012 for her service to her community.

Ian Anderson led the Trans Mountain Corporation’s expansion project as President and CEO from 2018 until retiring earlier this year. He joined Trans Mountain from Kinder Morgan Canada, where he had been President since 2005, when the Canadian government purchased the project. With Kinder Morgan he led the project to twin Trans Mountain to increase domestic and export fuel supplies to the west coast, successfully signing more than 40 benefits agreements with First Nations along the pipeline corridor. In those roles Ian earned a reputation as a stellar leader committed to creating new standards for community engagement and environmental stewardship. He is particularly known for personally undertaking previously-unprecedented engagement with Indigenous communities. He is a passionate advocate for reconciliation through responsible development of projects bringing Canadian energy to the world while protecting the environment.

Stewart Muir is the founder and executive director of Resource Works. Muir is a historian and award-winning journalist with a passion for the natural legacies of British Columbia. A graduate of Simon Fraser University and the University of British Columbia, he was a director of The Nature Trust of British Columbia from 2006 until 2014. During a fellowship at the renowned Centre for the Study of European Expansion at Leiden University in The Netherlands, he studied economic botany and the long-term consequences of deforestation and climate change.

Muir was a contributing author to The Sea Among Us: Life and History of The Strait of Georgia, an award-winning book edited by Richard Beamish and Sandy McFarlane. Published in November 2014, The Sea Among Us covers the natural and human history of a body of water that is of fundamental importance in every sense to all British Columbians. In April 2015, the title was awarded the BC Book Prize as "the most outstanding work that contributes to an understanding of British Columbia."

As lead writer of a civic-provincial review of Vancouver's 2011 Stanley Cup riot, Muir helped to frame recommendations to prevent such incidents in future. In his work as a public historian, Stewart has shed light on incidents of racism and censorship from British Columbia's past. Follow him on Twitter at @sjmuir or on LinkedIn.

Margareta is the managing director of Resource Works. She is a strategic communicator and natural resource policy advocate with a passion for technology, innovation and Indigenous economic development. In 2022, Margareta was the event lead for the Indigenous Partnerships Success Showcase, a historic movement bringing together Indigenous and corporate Canada to celebrate and develop improved partnerships. In 2020, Margareta and the team at Resource Works convened an unprecedented and diverse coalition of industry, labour, and Indigenous groups to champion Canada’s economic recovery from COVID-19. Since being formed, the Task Force for Real Jobs, Real Recovery has grown to 38 members, including all major Canadian industry associations in natural resources.

While studying for her Master of Public Administration in Energy, Technology and Climate Policy at University College London, Margareta led an international post-graduate consulting project, delivering recommendations on financial regulation, consumer debt, and digital government to the Prime Minister’s Office of the United Arab Emirates. A lifelong Vancouverite, she also holds a Bachelor of Arts in Asian Area Studies from the University of British Columbia. Follow her on Twitter at @margare7a or on LinkedIn.

Chief Ian Campbell is a hereditary chief of the Squamish (Sḵwx̱wú7mesh) Nation and served for sixteen years as an elected councillor. He was a lead negotiator on various resource projects and worked on the first ever binding Indigenous environmental assessment, for Woodfibre LNG.

Chief Ian was also instrumental in the establishment of the MST Development Corporation, which oversees land development in a joint partnership between the Musqueam Indian Band, Squamish Nation, and the Tsleil-Waututh Nation. He is also the governance chair of the Resource Works-supported Indigenous Partnerships Success Showcase.