What has the resource economy got to do with filling a tub?

Economists at Vancouver's Urban Futures Institute discovered that an ordinary bathroom holds the key to understanding the heart of British Columbia. 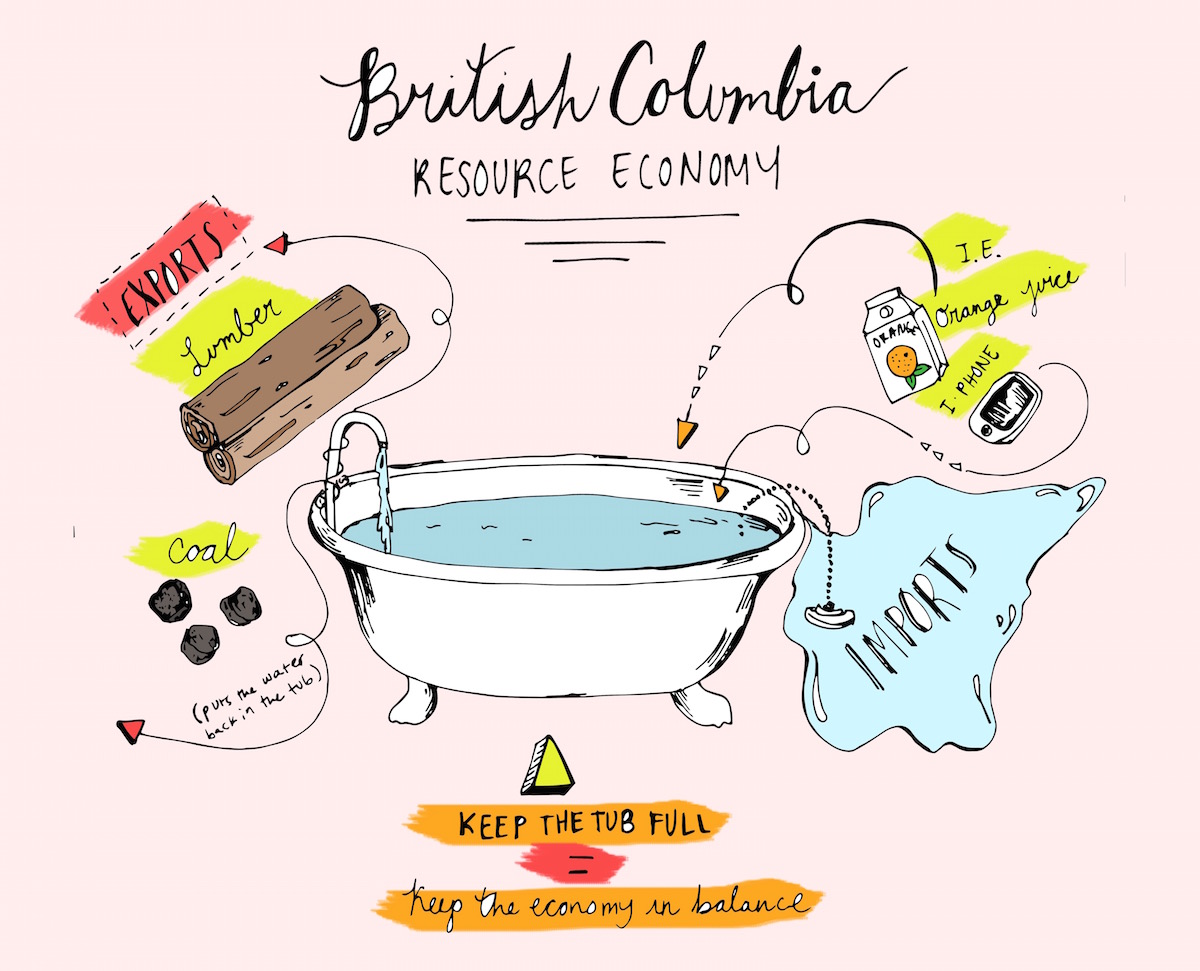 The analogy of a bathtub is useful in describing the economy in economic base terms. Our day-to-day experience in an economy is mainly with the water in the tub, in the transactions of the population-serving component as we buy groceries and get our hair done. The volume of money used in these internal transactions is analogous to the water level of the bathtub. Its flow or churn as people carry out business with each other is therefore analogous to water swirling in the tub.

Population-serving transactions within a region can continue indefinitely so long as nothing is imported from outside the economy. Imports mean money leaves the region in exchange for imported goods and/or services. In the bathtub analogy, importing is the equivalent of pulling the plug out of the bathtub, as it drains money out of the economy – all other things equal, the longer and/or the more we import, the lower the water level in the tub.

The tap must equal or exceed the drain

To offset the loss of money from the economy that results from imports, there must be a source of income for the region, something that brings money into the economy to ensure, directly or indirectly, that there is sufficient money in the region to at least pay for imports, and at best to exceed them, thereby increasing the size of the economy. In the bathtub analogy, the tap (exports) must bring in the same amount of water as the drain (imports) takes out of it if the water in the tub (the economy) is to remain at a constant level (neither shrink nor grow). If the outflow (imports) exceeds the inflow (exports), the water level will fall (the economy will shrink) and at some point in the long run, the tub will be empty, which will mark the end of importing, and likely of inhabitation in the region. Conversely, if exports exceed imports, the water level will rise, and the economy will grow.

Much of government activity is within the tub, taking money from one part of the tub (via income or consumption taxes) and adding it to another (via government spending). In some contexts, governments may act like importers, removing water from the tub to put in another tub, and in other cases the may act like exporters, bringing thimblefuls of water from other tubs to dump in ours.

This brief video explains the concept

While imports may define our standard of living, as they represent consumption that could not be produced locally, exports provide us with the ability to pay for them. Thus, the base of an economy is its ability to sell goods and services to residents of other regions, thereby providing the funds to support both population-serving and import activities. All non-export economic activity, from brain surgery to day care, relies on the economic base as a source of revenue. In other words, both population-serving and importing activities are effectively parasites on the export sector, and as parasites they should have a strong interest in the health of their host.

British Columbia and its residents, its businesses, its health and education spending are overwhelmingly dependent upon rural and resource activities, with two-thirds of the province’s economic base coming from activities located outside its two metropolitan regions and from primary resource activities that are coincidently located in metropolitan regions. Like it or not, two-thirds of the large double doubles and grande decaf soy lattes consumed in the province are ultimately paid for by non-metropolitan activities.

Excerpted from Regions and Resources: The Foundations of British Columbia's Economic Base, by David Baxter, Ryan Berlin, and Andrew Ramlo. This paper was published in 2005 and its fundamental points remain true today.

One of the aims of Resource Works is to continue to update and explore these ideas, something that we can accomplish with your help in sharing and talking about our mission.