BC has a lot of waste. But thanks to local innovators, BC companies are finding a way to use that waste to bring down emissions and supply renewable natural gas. 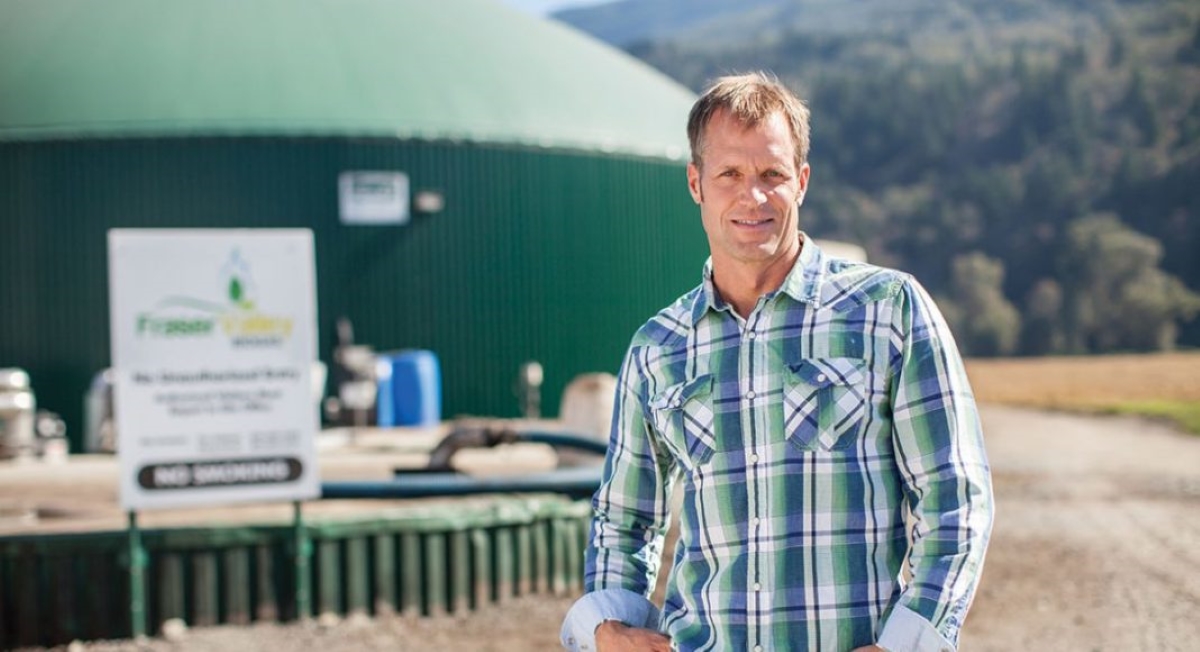 Pete Schouten (pictured) of Fraser Valley Biogas, a facility in Abbotsford, BC that turns waste into natural gas. Photo from Spudsmart.

With the push for decarbonization, Canadians are hearing about emerging alternative energy sources. Of course, wind and solar energy have been in the public imagination for some time. In recent years, forest biomass and hydrogen energy have been introduced to the low-carbon conversation.

But here in BC, FortisBC is working on a new project you may have never heard of: biogas.

Biogas is a by-product of sewage and wastewater treatment plants, landfills, and even organic waste from dairy farms.

In Metro Vancouver, Fortis BC plans to extract the biogas by-product from the Lulu Island sewage and wastewater treatment plant in Richmond.

That renewable biomethane gas will soon be fed into FortisBC’s natural-gas grid. Mixed with FortisBC’s natural gas from other sources, it can be used for heating and cooling buildings, generating electricity, serving home and restaurant kitchens, fuelling vehicles and vessels, and powering industrial processes.

Biogas presents an opportunity few would have thought of. It’s not just green, it’s smart and economical.

About half of Lulu Island’s biogas by-product is used to heat and fuel the plant and its processes. But the other half is simply flared (burned off in the open air), contributing to greenhouse gases. Now, the new facility will scrub the spare gas to make it clean and pipeline-ready for FortisBC. The new system will use technology that is chemical-free and environmentally friendly.

The amount of Renewable Natural Gas (RNG) expected to come from the Lulu Island plant could heat as many as 660 homes.

Jeff Carmichael, division manager for business development at Metro Vancouver, says some of the revenue from the Lulu Island biogas will be used to build a heat-capture system to reduce the plant’s own methane use, thus making more of it available for sale to FortisBC.

“This seems like a really exciting opportunity, both from a financial standpoint and from a greenhouse-gas point of view,” said Carmichael.

FortisBC is already getting renewable gas from sources including the City of Vancouver’s Delta landfill, the Surrey Biofuel Facility (which processes organic waste from more than 150,000 Surrey households, industrial, commercial and institutional operations), and other municipalities.

RNG also comes to FortisBC from landfills at Kelowna, Salmon Arm, and organic waste from farms in the Fraser Valley.

In Abbotsford, BC, Fraser Valley Biomas (FVB) produces enough gas to heat 1,000 homes. Begining in 2010, it was the first agricultural biogas operation in BC and the first biogas plant in Canada to produce and inject RNG into a gas pipeline. The facility is supplied by waste from Naturally Homegrown Foods and Heppell Potato Corp, which it uses to produce RNG.

Said Pete Schouten, owner of Naturally Homegrown Foods, Heppell Potato Corp, and FVB: “We’ve been growing potatoes in the Fraser Valley since 1920, and operate BC’s only potato chip manufacturing plant. When we learned about the opportunity to become involved with and operate Fraser Valley Biogas, we felt that it was such a unique fit with our vertically integrated operations. We are able to capture biogas from our waste and close the loop in a sustainable way.”

Similarly, Kelowna-based REN Energy is building a $130 million facility at Fruitvale, BC, to use sawdust, wood chips and hog fuel to produce RNG. In partnership with FortisBC, the facility will be the first in North America to turn wood waste into RNG.

“Our priority has been focused on pioneering sustainable projects, and so we are very excited to partner with REN Energy to bring innovation to the RNG market,” says Sean Montgomery, president of Thermo Design Engineering. “Working alongside our partners, we are creating jobs and boosting the Canadian green energy economy through cutting-edge technology.”

Facilities like those by REN and FortisBC will help displace traditional natural gas with renewable natural gas. Joe Mazza, FortisBC’s vice-president of energy supply and resource development, said Fortis has a goal of RNG making up 15% of its overall supply by 2030.

It’s an element, as well, of Metro Vancouver’s Climate 2050 Strategy, which aims to achieve regional carbon neutrality by 2050.

Mazza said: “By partnering with government and industry, FortisBC continues to innovate in the renewable gases space. We’ve been delivering renewable natural gas for over a decade and it’s an excellent example of a renewable energy that can be delivered through our gas infrastructure.”

And Scott Gramm, FortisBC’s renewable gas supply manager, says: “Looking beyond 2030, our long-term vision is for renewable gas to make up the bulk of the gas we provide to customers, reducing the use of conventional gas every year.”

Metro Vancouver has plans to install RNG-extraction systems at up to three of its other sewage-treatment plants. The Annacis Island and Iona Island treatment plants already produce both heat and electricity for their own use, and the Lions Gate treatment plant produces heat.

Value-added opportunities continue to emerge. Research is being conducted using wastewater, which is full of nutrients, to grow algae that could then be turned into biofuel. And Metro Vancouver is working to enable municipalities to use energy from sewers to heat nearby buildings.

In addition to renewable natural gas, the Lulu Island plant produces biosolids waste that then can be used for such purposes as mine reclamation.

When it comes to biogas, one man’s rubbish is another man’s resource.