Seven signs BC's forestry sector is on the upswing

Stabilizing employment numbers, a more skilled workforce, and rising net investment and labour productivity are among the contributing factors

The total number of people working in the forest sector in Canada has been declining for decades. So where’s the good news? The decline has moderated since the recession in 2009, which is - believe it or not - a sign of strength. 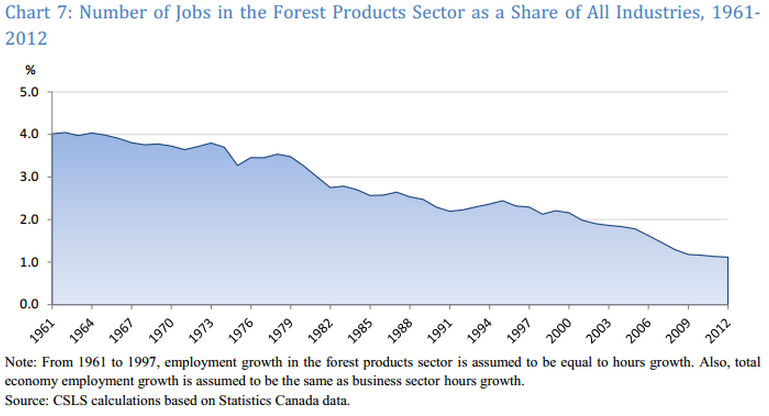 Much like the rest of the Canadian workforce, workers in the forest sector are more educated than ever before - which they’ll need to be as forestry becomes increasingly high tech.

Net investments - which describes money spent on new stuff, rather than maintaining and replacing old stuff - is trending back up after a big dip following the recession. The figures are, however, still negative, a sign that the sector is still losing assets every year. But not so badly now as a few years ago.

4: Labour productivity growing faster in forestry than in other sectors

While the sector is shrinking, its productivity is making major gains. This chart shows that the amount the sector produces with each hour of work has increased significantly faster than that of the rest of the business sector in Canada. Productivity improvements over the long term are considered essential for any sector to remain competitive.

The BC forestry sector has the second-highest labour productivity in Canada, after Alberta. And BC is closing that gap with the country’s fastest productivity growth, which is almost double the national average.

6: And better than similar countries

In terms of growth in labour productivity, Canada has bested, or matched, similar countries, which bodes well for our future competitiveness, all else being equal. 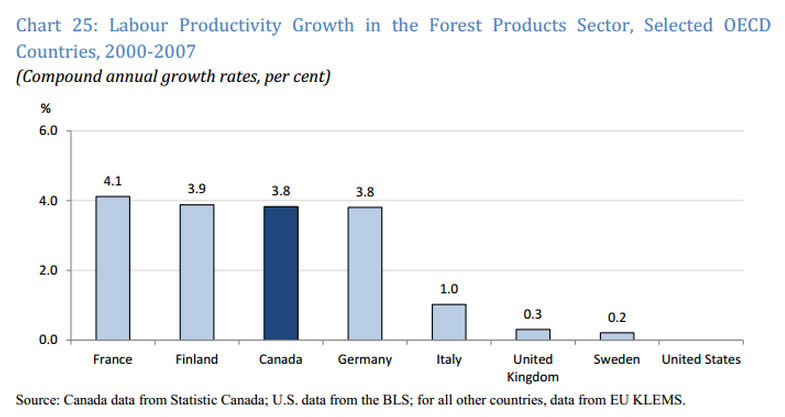 Unfortunately, the report does not include a chart for this, but BC has shown outstanding productivity improvements in the area of wood-product manufacturing. Labour productivity in this sub-sector improved by 6.4 per cent a year between 2000 and 2012, compared to a national average of 4.5 per cent. The difference is likely due to the larger scale of the manufacturing operations here than in other provinces.

BUT: Profits are still low

Despite these promising signs, the Canadian forestry sector still has a long way to go to regain the profit levels it saw in the early 2000s.

Peter Severinson is the Research Director at Resource Works