Greener and more efficient use of our precious natural resources can only come from harnessing technology. In the Naturally Resourceful series, Resource Works writer Don Hauka looks at the British Columbia companies that are on the leading edge of this transformation. Seventh in the series. 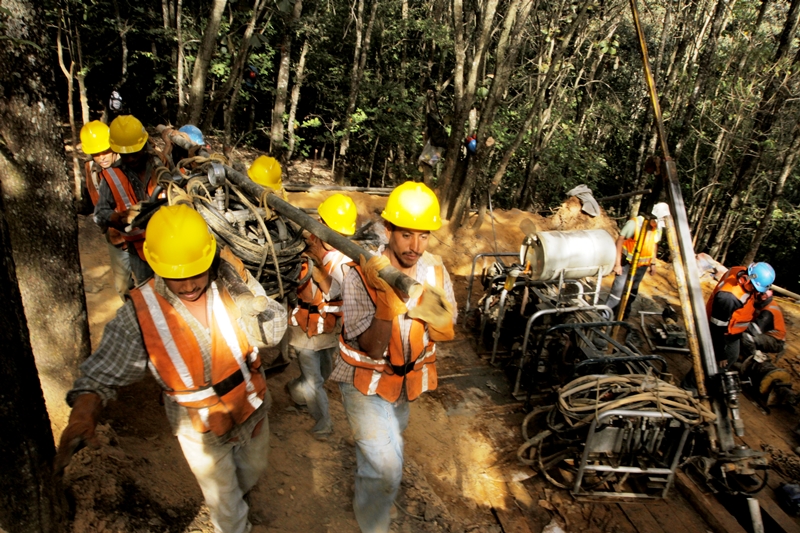 The Vancouver-based company has become a world-leading innovator in the mining and energy sectors in the Americas, Africa and Asia by taking an "Ikea approach" to drilling.

"We set out to change the industry," says Jerry Huang, Energold's Director of Corporate Development and Investor Relations.

"We changed the process and became one of the main innovators in the drilling technology side because our founder and CEO Fred Davidson took the Ikea model of modular solutions to the problem nearly 20 years ago."

The problem was drilling rigs serving the mining industry were huge, weighing three to four tons, and left an even bigger blot on the landscape. Vast areas had to be clear cut to get them into remote sites. More often than not, the drilling team came with the rig and no locals were employed. The environmental and social impacts were significant. And it cost a lot of money.

"It was a huge capital effort and logistical effort to get these drill rigs to mine sites and even harder at these early stage projects which were in the middle of nowhere," says Huang. "You also had a lot of social and environmental issues. They weren't the most environmentally-friendly rigs."

Davidson and the Energold team came up with a simple but ingenious engineering solution. They broke down all the pieces that made up a big rig and shifted to a hydraulic pressure system. Instead of one big engine, they could generate the same amount of horsepower with four smaller diesel engines. All the components were compacted and slimmed down so no piece weighed more than 350 to 400 pounds.

The whole package fits into a 20-40 foot shipping container and can be dropped by helicopter into a remote region without building a road. Or the rig can be manually hauled to the site by local labour using existing trails.

"That allows us to hire more locals in South America and in developing nations. When you're paying locals a wage and they can see what you're doing it gives them local social license and support for the project," says Huang.

"These drill rigs were engineered from that need to be more social and more environmentally conscience. At the same time, we're still able to get the same amount of performance because of the engineering ingenuity."

Part of Energold's sense of social responsibility is giving back to the local communities in which it operates. Not only are between 15-25 local labourers employed and trained on a given project, the company also has a program of constructing drinking wells in communities.

Out of those small drilling packages have come some of the largest operations in the Americas, including mines operated by Barrick Gold Corporation and Goldcorp. Energold itself has grown from six drilling rigs in 2006 to over 240 rigs drilling worldwide in 25 countries including the North America, South America, Africa, Asia, Central America as well as the Caribbean and the Middle East. They've diversified from mining exploration into green energy and renewables as well as geothermal and geotech drilling.

The company's outside-the-box thinking has earned it many awards, including being recognized as Most Innovative Company in BC in 2012 by BC Business. Huang says Energold is part of a vibrant B.C. culture of innovation. And that's crucial to the provincial economy and our standard of living.

"The West Coast of North America in general has always been known for being more creative and willing to try new things, to go outside the envelope," says Huang.

"There's a saying: 'What can't be grown has to be mined.' That's very true. A lot of the basic building blocks in the world, whatever  you use, even the internet when you think about servers, there's a lot of mines and a lot of copper behind those circuit boards. These things aren't made from scratch -- they don't grow on trees," he says.

For more information on Energold Drilling, visit their website.