Resource Works asked whether tall old growth trees are really running out the way that a recent Sierra Club report claims. What we found was startling.

A study hosted by pressure group Sierra Club BC, entitled "BC's Old Growth Forest: A Last Stand for Biodiversity", made the argument that old growth forests have all but vanished in British Columbia.

The April 2020 paper states categorically that "only a tiny proportion of BC’s remaining old forest (3%) supports large trees" and "only ~35,000 hectares of old forest have a site index greater than 25".

As a result of this claim, it was widely reported that large, old growth trees are about to disappear in British Columbia.

The report was cited over and over by blockaders who occupied the traditional territory of the Pacheedaht First Nations in an ongoing attempt to obstruct foresters' access to work sites.

It has been endlessly cited in media reports, such as this from Maple Ridge: "Only three per cent of B.C.’s old-growth forest remains."

The allure of the "vanishing old growth" mythology is clearly a powerful force.

There's just one thing. It's not true.

Analysis by Resource Works shows that the claim is not borne out when compared with publicly available data.

In fact, on the Coast alone Resource Works found 2.2 million hectares of forest cover consisting of trees that stand 28.5 metres (95 feet) or taller. That is a staggering 63 times greater than the Sierra Club-hosted old growth report claimed.

Inside the provincial government it was already understood that the 3% figure is a flawed and subjective talking point being pushed by a narrow interest group. The new information from Resource Works makes it easier for those outside of technical professions to understand why the phrase "Fairy Creek" is a true eye-roller among those familiar with the ins and outs of the issue.

The abundance of biodiversity-enhancing tall old trees is vividly illustrated in this chart based on data from HectaresBC: 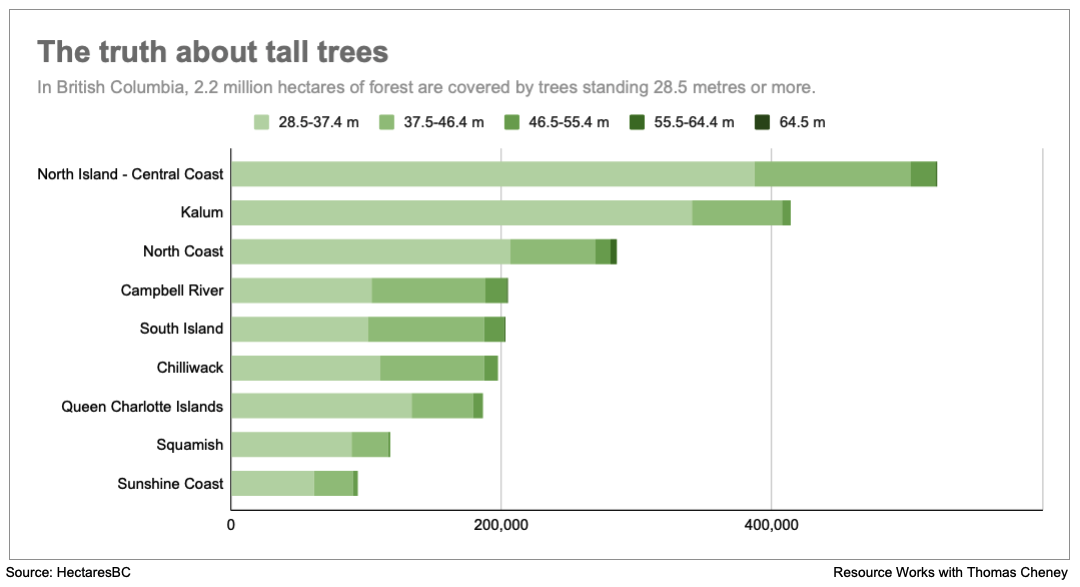 On the South Island, where pressure groups have staged an elaborate ongoing demonstration in support of the Sierra Club info campaigns, there are more than 200,000 hectares of large old growth trees.

"No wonder people are confused," said Stewart Muir, executive director of Resource Works and host of the new ForestWorks podcast. "A lot of people would conclude that old growth trees are rapidly running out when that is simply not the case.

"Clearly, the Sierra Club's study is not based on credible analysis if we find that in one district alone, there is five times as much tall old growth as the Sierra Club claims exists in the province as a whole."

The information discovered by the Resource Works research initiative does not support the Sierra Club's conclusion that productive old forest has "almost vanished across BC."

The Resource Works analysis reflects the fact that there are about 13.7 million hectares of old growth forest in B.C. as a whole.

"We have seen the strange spectacle of the Sierra Club authors try to dismiss the majority of old growth forests as being of lesser value because they don't meet one or another criteria," said Muir. "By looking at the HectaresBC dataset, we were able to establish that this figure of 35,000 hectares of 'special' old growth grossly understates the actual picture."

Pressure tactics in the area around Fairy Creek have been utilized by a coalition of pressure groups including Sierra Club BC to force the provincial government to take drastic steps to prevent forest harvesting activities.

There is a better approach. The week of Sept. 13, the Union of BC Municipalities which represents municipal governments, called on the provincial government to "engage and consult with local governments and Indigenous communities as it moves forward to implement recommendations within the Modernizing Forest Policy in BC Intentions Paper."

This includes matters related to old growth designations and deferrals, with the recognition that there will be implications and impacts for workers and communities resulting from changes to forest policy.

Listening to communities affected is a good step forward, as is ensuring that single-purpose advocacy groups cannot be allowed to shove aside forestry science and public interest.