An inherited human facility causes us to be fearful, despite the evidence

We are so conditioned by fear that it takes only one situation or event to establish a long-term aversion to the prospect of it happening again.

This article was originally published as an Energy and Environment bulletin from the Business Council of British Columbia.

British Columbia is ~950,000 square kilometers. The province includes 40,000 islands, and mountains cover 75 per cent of the land mass. There are 162 cities, towns1 and unincorporated areas, ranging in size from less than 250 people to over 700,000, all of which cover only 1 per cent of the province’s total land area. Sixty per cent of us live in Greater Vancouver and Greater Victoria — a combined area of 3,396 square kilometres or just 0.4% of BC’s total physical land mass.

These pathways to connection matter: without the movement of people, goods, and ideas, cities falter, economies wane, and societies wither. Globally, the total flow of people, physical things, and intellectual property is increasing. An emerging middle class in Asia and some other developing economies demands the comforts of the developed world — a variety of food products from places far away; heating and cooling in buildings (shelter) made from wood, glass, stone, concrete, and steel; living spaces stocked with a variety of labour- and timesaving appliances and tools; screens of all sizes for both utility and entertainment, made from chemicals, glass, metal alloys; clothing — the list is endless, and all these goods and services are demanded at a reasonable price. Canadians and British Columbians are no different.

Why does this matter? Because about 60 per cent of global GDP depends on household consumer expenditures — the stuff we buy and use every day. Figure 1 (below) shows that the two biggest expenses for BC residents are shelter and transportation (90 per cent private vehicles), followed by food. Clothing and household furnishings and equipment come next. While BC’s GDP is derived from 80 per cent services and 20 per cent goods, this does not match what we actually spend our disposal income on — a sizable portion of it is used to finance the consumption of goods, including food and manufactured products from elsewhere in the world.

Where does all the stuff come from?

Canada is the 11th largest exporter of merchandise (2015) and the 10th largest importer; we are also the world’s 6th largest exporter of energy and mining products. BC imported just over $100 billion and exported around ~$94 billion worth of goods and services in 2015.8 This merchandise is delivered via transportation modes based on the unique needs of a product along a complex supply chain. The latter is defined as the transformation of natural resources, raw materials, and components into a finished product delivered to an end customer. 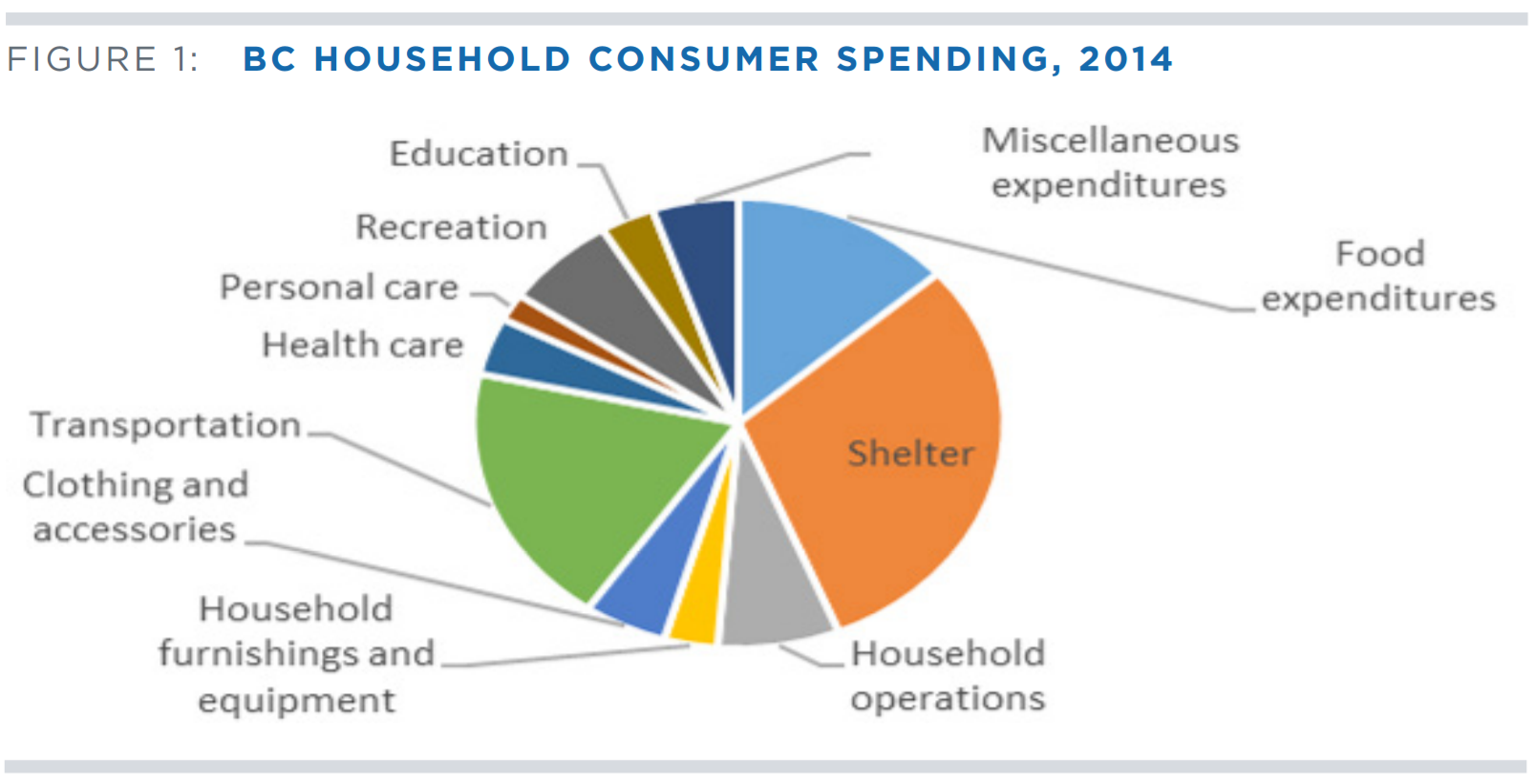 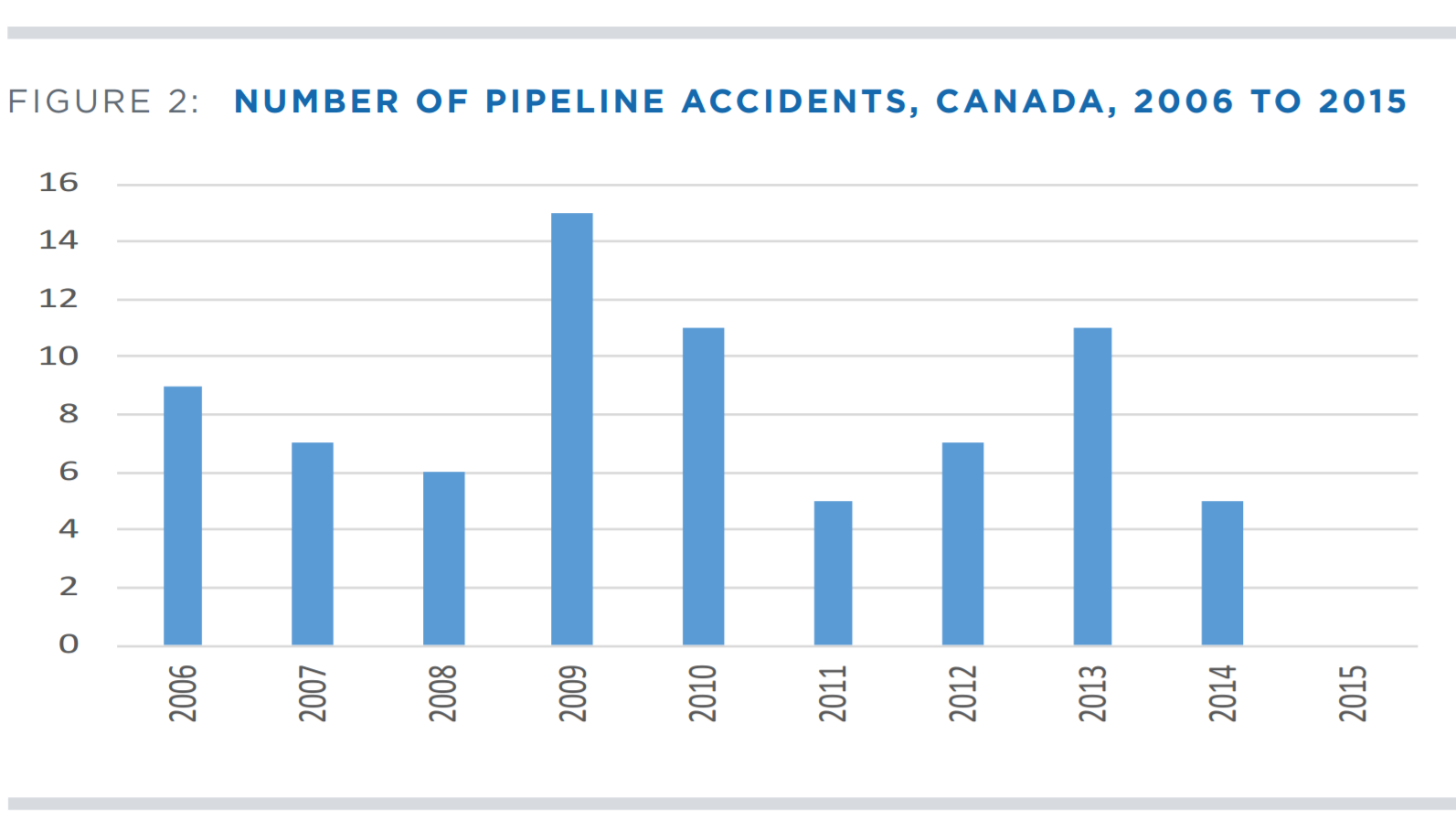 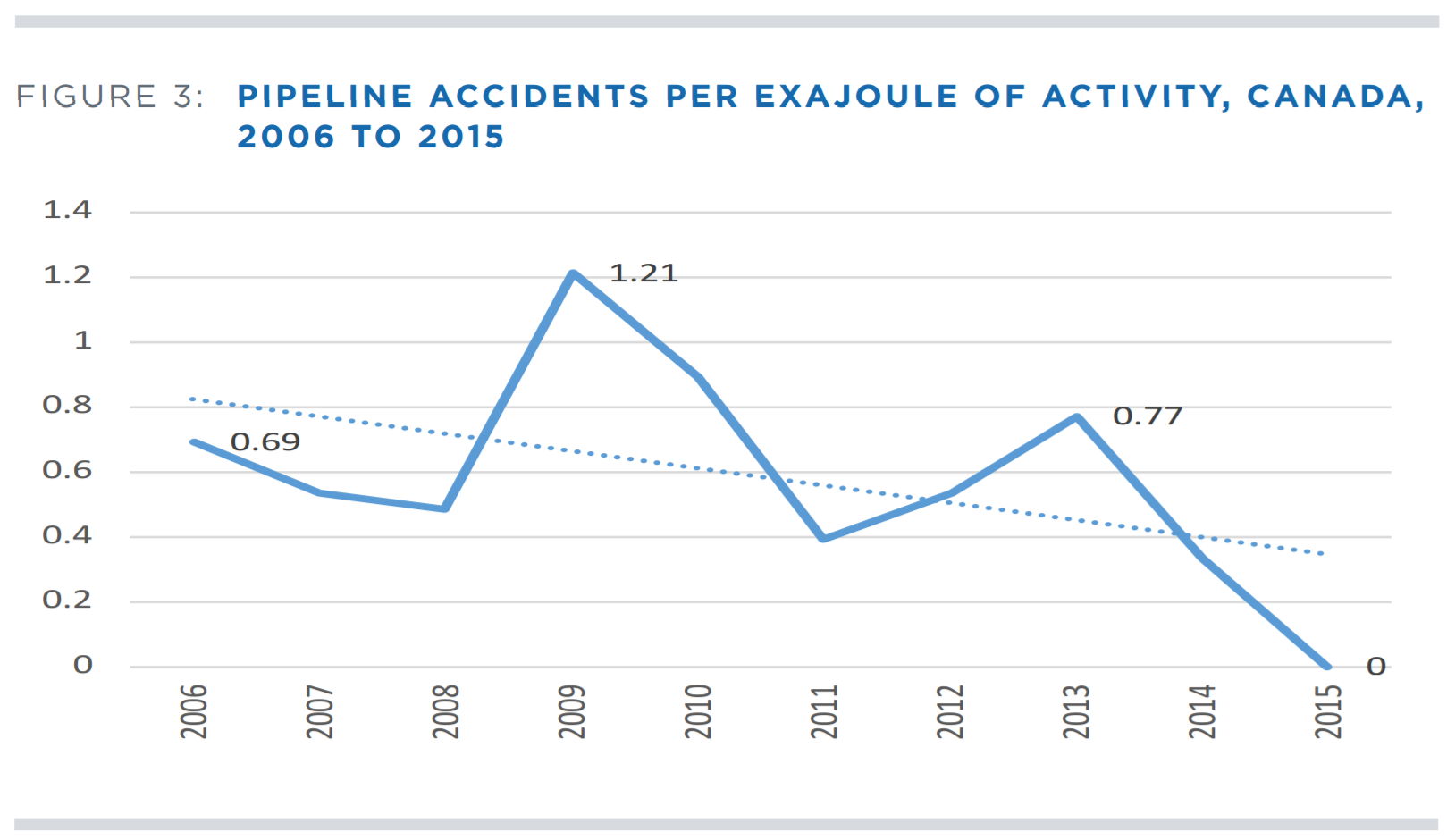 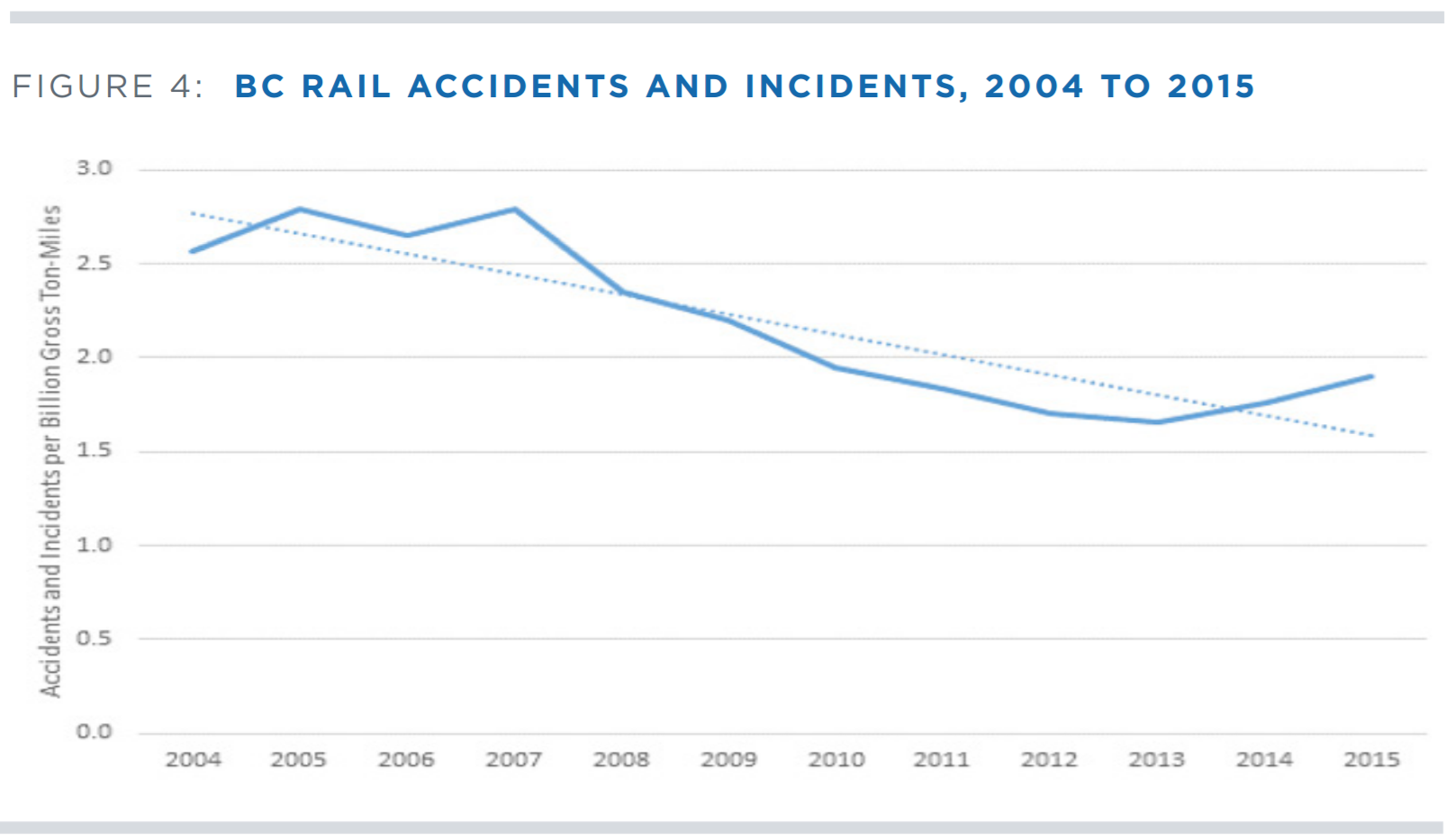 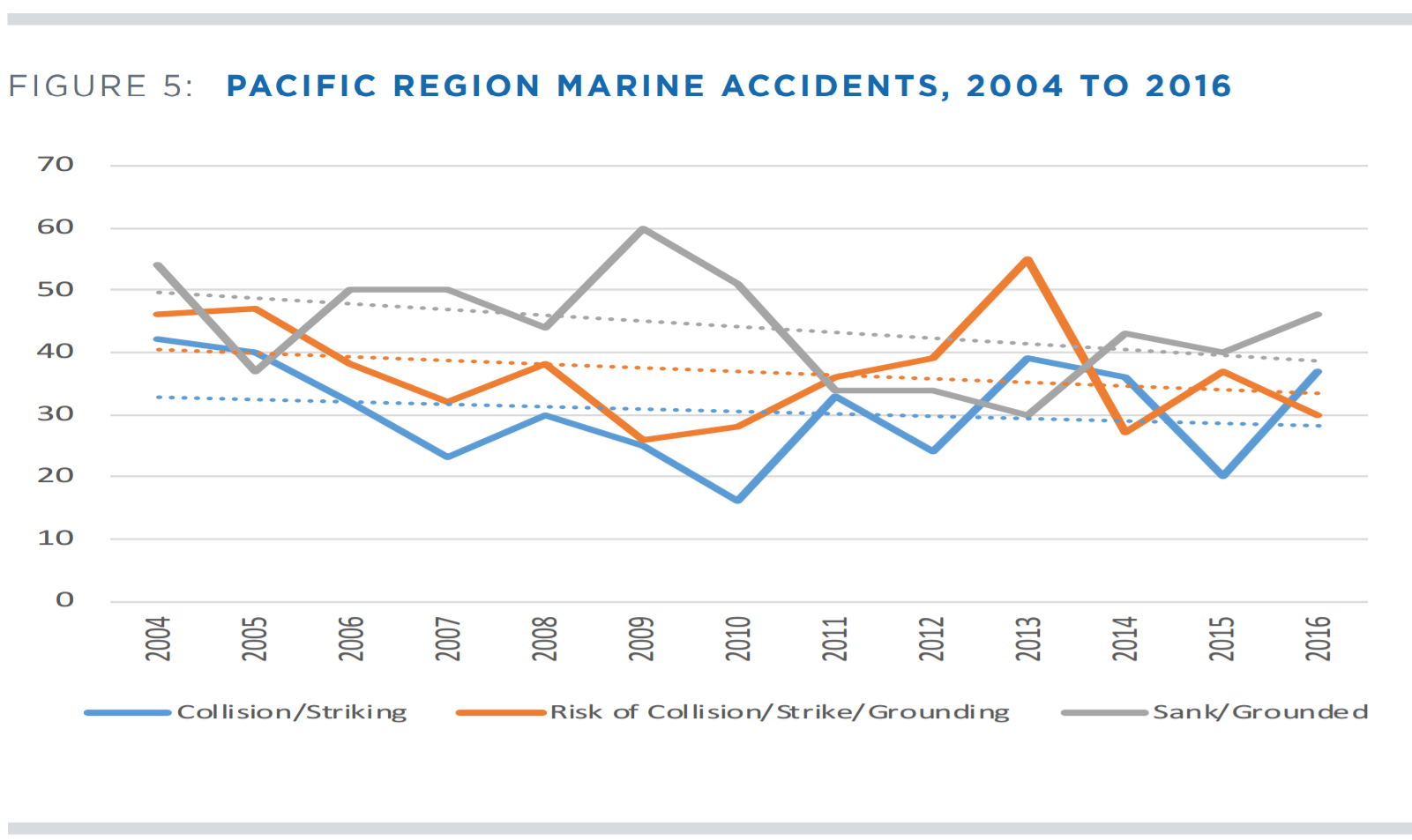 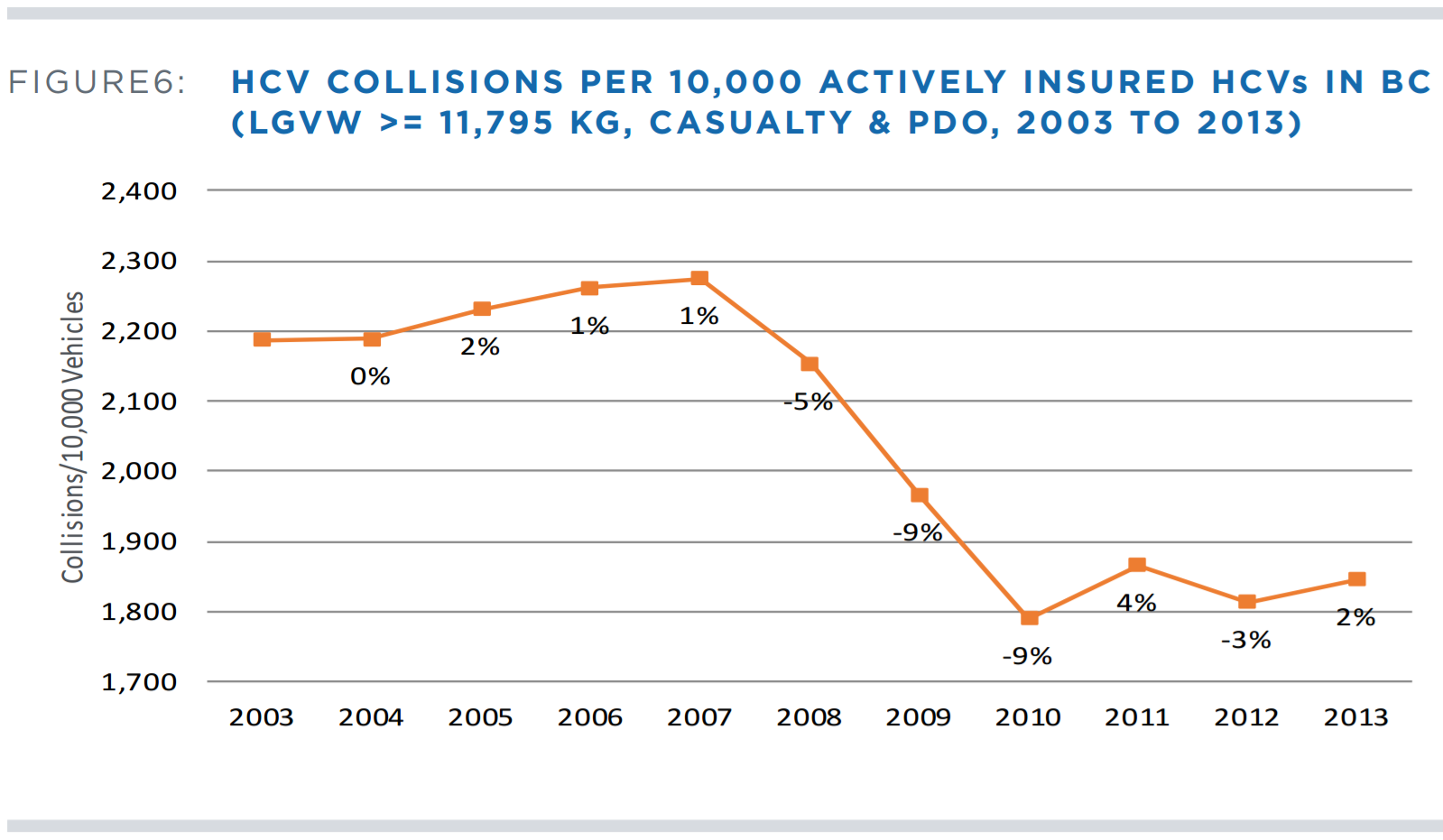 What are people concerned about?

The short answer is “the unknown”. In the case of moving goods like oil, gas, and chemicals, or the operations of power plants, some people fear the possibility of an accident with highly adverse results — pipeline  rupture, explosion, sour gas leak, tanker grounding and spills.

It is misleading to think there are more threats in today’s supply chains — the infrastructure of delivery — than existed in the past, or that today’s risks are more severe than in the past. Unfortunately, the existence of more and bigger risks is a common but mistaken belief colouring the public dialogue about activities that are central to meeting growing worldwide consumer needs — most of it focused on “stuff.” Collectively, we have done a remarkable job creating a culture of exaggerated fear around big projects.

At the moment, there seems to be a particular fear, in Canada, of oil spills, on land and at sea. Most media communication features fear-based language and messaging, and takes advantage of an inherited human facility to be afraid. We are so conditioned by fear that it takes only one situation or event to establish a long-term aversion to the prospect of it happening again.

In the context of an oil spill, we recall Exxon Valdez, which occurred in 1989, and for the most part not in the living memory of many who protest.

Unfortunately, once we have constructed a vivid image of a negative outcome, even if low probability, the more certain we are of its likelihood — despite the evidence. Thus, the probability of rare events is overestimated because of the confirmatory bias of memory … and over-weighted by attention.

The constant use of negative language in a proliferation of media contexts, most of them not fact- or science-based, exacerbates the misperception of risk. This is exactly the tactic used by opponents of resource development in British Columbia. A quick look at a City of Vancouver website confirms this hypothesis. Repetitive negative language about pipeline development includes: bad, catastrophic, severe, 10-times-higher, devastate, imposing-such-a-risk, and going backwards. Such language sells a point of view but often the rhetoric is contrary to the evidence.

What the evidence tells us

The data tells a completely different story — one of increased safety and fewer accidents over time, especially for pipelines (Figure 2). This is also true for rail and marine (Figures 4 and 5). Since the 1930s, oil tankers and container ships have traversed the west coast, with the former accounting for 0.75 per cent of the total traffic and producing zero serious spills of crude. In fact, about 90 per cent of world trade is carried by the international shipping industry and the global loss of ships and life declined dramatically over the past two decades. Similarly, in trucking we see a sharp decline in heavy commercial vehicle accidents over the past decade (Figure 6).

What are government and industry doing?

In short, continuous improvement. A quick look at changes to safety requirements for rail, pipe, trucking, and marine transport over time shows that both government and industry have been listening and responding to the concerns of Canadians.

Pipelines: Canada’s pipelines are regulated over their entire life cycle. The new Pipeline Safety Act amended the National Energy Board Act, and to some extent the Canada Oil and Gas Operations Act, to enhance the principle of “polluter pays” and to impose absolute liability for all costs and damages of National Energy Board regulated companies. British Columbia’s Oil and Gas Activities Act, Regulation, and applicable Canadian Standards Association standards, along with oversight from the BC Oil and Gas Commission, covers prevention, preparedness and response, and liability and compensation for provincially-regulated pipelines. On a very important note, other countries look to Canada as a model for pipeline regulation. We are considered world-class — a fact never acknowledged by environmental groups.

Rail: There are fourteen applicable acts with a safety orientation, although the Railway Safety Act and 21 related regulations, and the Transportation of Dangerous Goods Act, are the most important. Since mid-2013 there have been numerous changes and other new initiatives to improve safety — directives, Ministerial Orders, studies, task forces and working groups, amendments to regulations, and guidance documents, all designed to enhance rail safety. This regulatory regime is complemented by well-developed safety management systems in each railway, and voluntary initiatives such as TRANSCAER® — the railway and chemistry sectors’ commitment to work with municipalities, emergency responders, and residents in communities along transportation routes to make sure they are informed about the products being moved through their areas and are prepared to respond to potential incidents involving dangerous goods.

Trucking: In trucking, the federal government regulates safety standards while provincial governments have responsibility for on-road enforcement of federally regulated trucking companies and oversee most of the operating conditions and the economic environment for intra-provincial carriers, (e.g., driver qualifications, fuel taxes, vehicle weights, vehicle dimensions, rules of the road, vehicle inspection, securement of loads, vehicle licensing and mandated safety equipment). Most spills from tank trucks occur during loading or unloading, not while in transit. These are easier to contain and manage and do not have broad negative environmental impacts. Canada’s economy is dependent on trucking to support trade (exports and imports) and to supply retail stores on which the public depends for basic sustenance.

Marine: Safe navigation of ships is governed by five statutes: Canada Marine Act, Canada Shipping Act, Marine Insurance Act, Marine Liability Act, and Pilotage Act, and 81 associated regulations. In November 2016, Canada announced an Oceans Protection Plan, a $1.5 billion investment in marine safety systems, ecosystems management, and additional research on oil spills clean-ups. The plan also committed to strengthen the Canadian Coast Guard and build on experience to develop a new regional oil spill response plan for the north coast of British Columbia. British Columbia has engaged with a variety of stakeholders over the past number of years on the development of a land-based spills regime. In 2016, the province amended the Environmental Management Act by adding a new section on Spill Preparedness, Response and Recovery. Seven industry groups16 and their member companies are collaborating on the development of a BC Preparedness & Coordination Organization (BCPCO) aimed at strengthening preparedness, collaboration and communication associated with land-based spills and leveraging existing and emerging federal and provincial regulatory frameworks, as well as industry systems and practices.

Standing ready for low-probability but high-consequence events is part of the modern regulatory state. BC and Canada already have world class systems for managing the risks of transportation supply chains — indeed, our regulatory systems are viewed, globally, as among the best. It takes a bit of research to understand the breadth and depth of the system. Criticism about gaping holes in the regulatory system is greatly exaggerated and overlooks industry’s close attention to safety. Further, adding more regulation will not necessarily improve performance, although it is sure to increase redundancy, confusion, and costs to industry and other stakeholders — ultimately showing up in higher costs for consumer goods. It is our view that new prescriptive regulations in the area of land-based spills are unnecessary. Instead, policy-makers should be looking to enhance response capacity in BC by promoting collaboration, information-sharing and the dissemination of best practices to drive continuous improvement.

Denise Mullen is Director, Environment and Sustainability, at the Business Council of British Columbia