For more than a year, Resource Works' Stewart Muir has been sharing real-time oil tanker maps in Twitter, making the point that safe ship movement is an everyday occurrence all around the world. Here are some recent maps.

Oil cargoes to and from both Canadian and American ports on the west coast are essential to transportation in the region, and have been for many decades – even though you'd never know that from the near-hysterical opposition to a small amount of additional tanker traffic planned on the Canadian side.

For the average person, it has been very natural to buy into the concerns floated by various groups. After all, who isn't of the belief that British Columbia's maritime coast is a special place, and any shipping accidents would be unacceptable?

Yet, it has also struck many of us as an odd thing that, for the most part, those who are most vocally against one ship a day serving Canadian interests happen to be the branch-plant operations of powerful American environmental organizations.

Those groups, such as Tides and the various billionaire foundations, seem to believe they know better than Canadians do about what Canada's economic future should look like.

Sorry, folks: we have to disagree. The evidence clearly shows that Canadians are thoroughly competent mariners. We have the same rights as any other nation to decide our economic destiny. And if one thing is blindingly clear, it is that the case has not been made that tankers in Canadian waters are less safe than tankers anywhere else.

Nothing better illustrates the hypocrisy of the anti-Canada activists than my ongoing map series drawn from real-time shipping data from Marine Traffic. Far from being an abnormal, unsafe activity, the global picture of oil tankers is that they are a daily part of trade everywhere in the world.

Here are some popular recent tweets from me (@sjmuir): 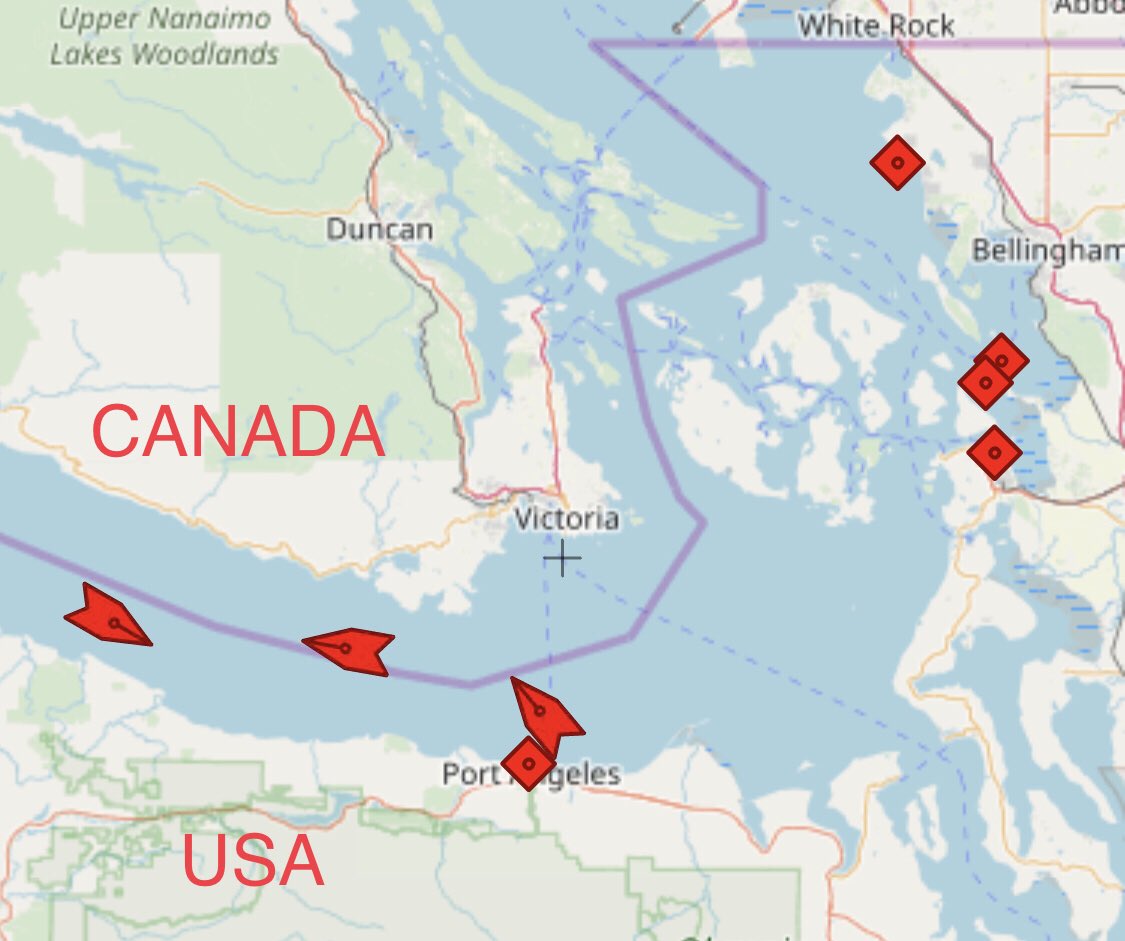 The map above shows that on the 23rd of March, all of the tanker activity in the Straits of Georgia and Juan de Fuca was on the American side of the border. Not a single tanker ship in Canadian waters.

My comment: "Oil tankers galore in the Salish Sea this afternoon, every single one bound to or from a US port or parked at one (yes, including the one sailing through Canadian waters). Oh, Canada." 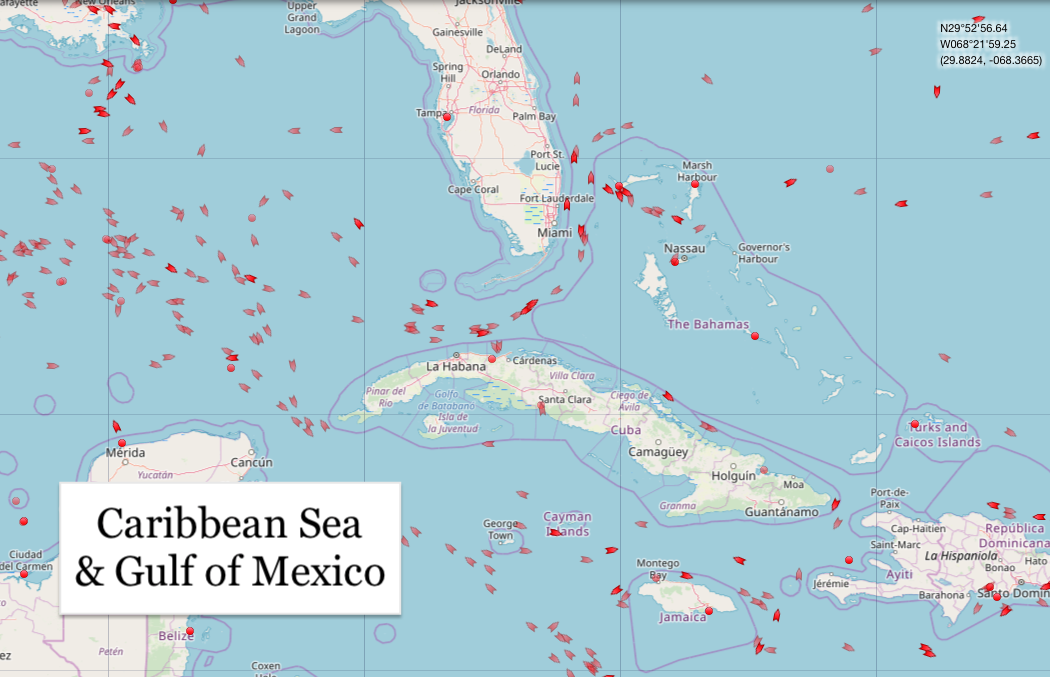 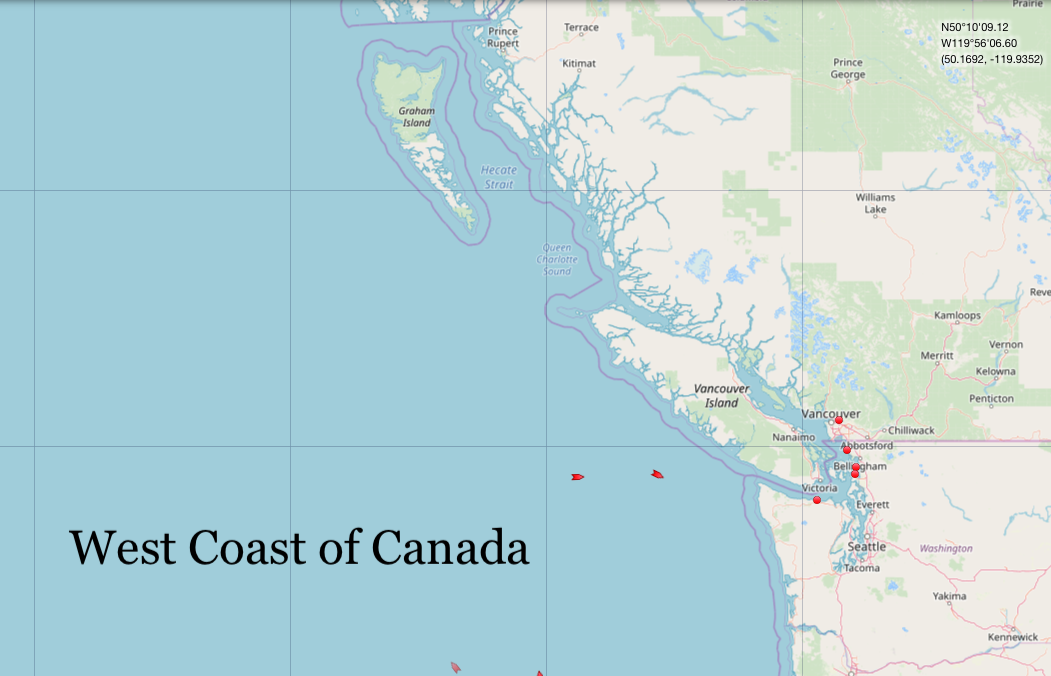 I've lost track of the number of times I've had Vancouver residents tell me that the port can't handle one tanker ship a day instead of one a week, "because it will destroy tourism." Let's set aside the fact the extremely low chances of a major tanker incident in Vancouver waters (once every 3,000 years), or the fact that a "major" incident would actually not be the loss of a ship's entire contents but, rather, only a small portion of them.

Around the world, from Amsterdam to the Adriatic to the Caribbean to southern California, large scale tourism thrives alongside oil tanker shipping. There is no rational basis for saying that Vancouver is any different.

My tweet: "For those who think tourism is incompatible with safely shipping one tanker of crude oil a day, isn’t it surprising that the hurricane-prone Caribbean remains one of the world’s great tourist draws? (The red symbols are tanker ships.) @MarineTraffic"

The fact is that for every oil tanker sailing past a tourist strolling on the Stanley Park seawall, there are literally scores of them that go past the Canadian snowbirds frolicking on the beaches of Varadero. The odds of a catastrophe are massively greater in the Caribbean than in Vancouver waters. Yet nobody I've heard has ever thought twice about a Cuban holiday because they're afraid of an oil spill.

This tweet received 62 retweets and 97 likes at last count. 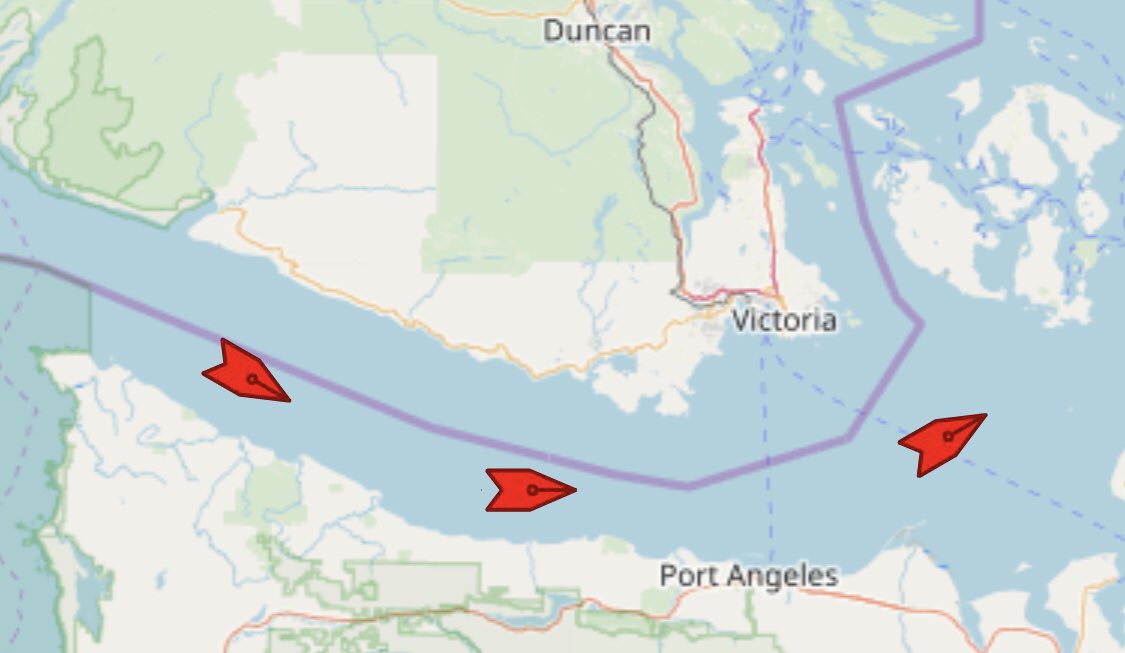 British Columbia's neighbour to the south, Washington State, has recently joined in the B.C. government in the campaign to landlock Canadian oil. As anyone familiar actual shipping traffic is aware, this is any incredibly hypocritical position.

My tweet: "Three crude oil tankers are headed into Washington State refineries at this hour. Meanwhile, state governor @JayInslee is mounting a presidential bid based on bashing energy sovereignty and maritime access. The hypocrisy is truly monumental."

Recently, I assembled the 25 most-popular tanker tweets into a single thread, which can be seen here. Next time you are trying to show (rather than tell) the true story about Canadian shipping competence, consider sharing these messages. And if you're interested in diving into this yourself, sign up for a free Marine Traffic account or download the app on your phone.