Stewart Muir exposes environmental lobbying in British Columbia and how it has affected media coverage. 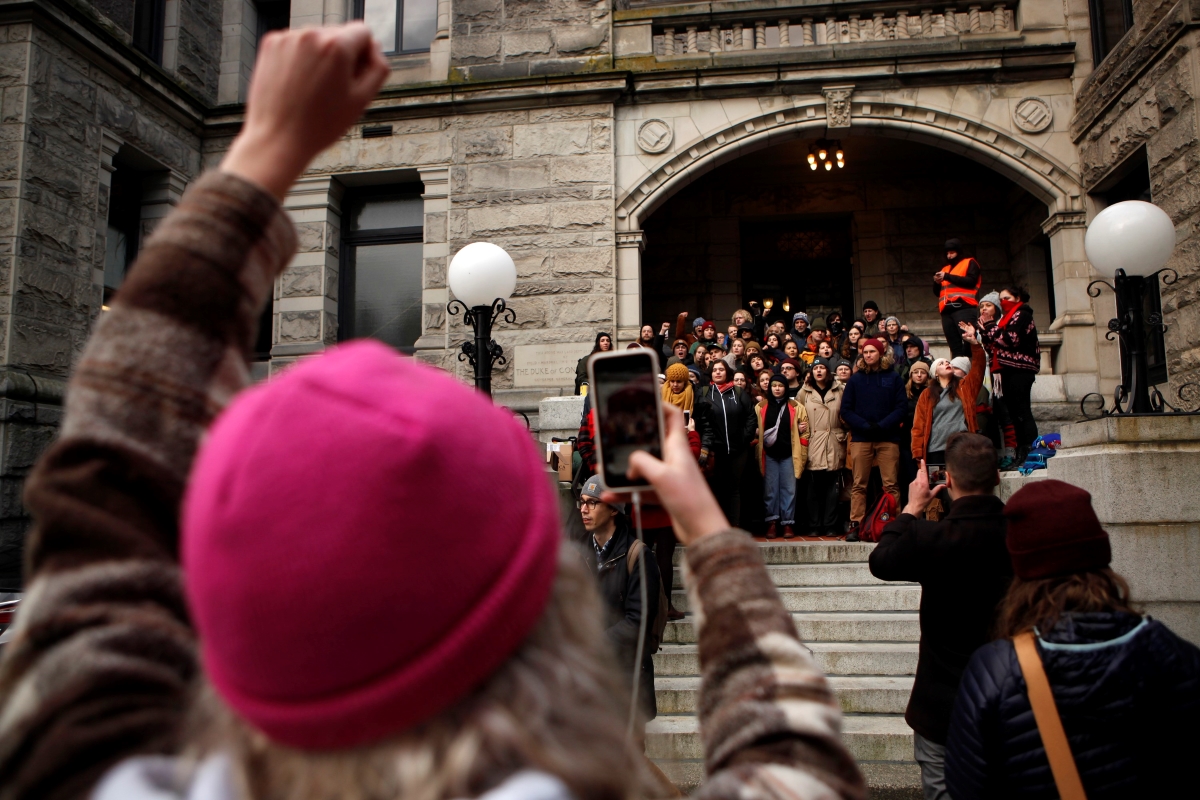 Protestors at the B.C. Legislature.

A broad lobbying coalition of environmental pressure groups has formed in British Columbia. It is of striking depth and breadth, covering numerous issues yet with many linkages between various coalitions. Recently, we counted no fewer than six major coalition efforts, referred to here for convenience as the “Grand Coalition”.

Although this type of coordination is not in itself novel, recent conditions may have created fertile ground for its rapid growth and influence. Legislation that brought about heightened lobbyist transparency have made it possible to see this influence more clearly than ever before. The existence and operation of the Grand Coalition raises some interesting questions about the formation of investor confidence.

If the stated goals of British Columbia eco pressure groups are adopted, almost all new infrastructure investment will be made more difficult to build than today. Existing industrial operations will also be affected.

This is not just about traditional natural resources. All businesses requiring permission to operate are being targeted by a broad agenda aimed at reduced access and higher control for any activity that can be argued to have a real or potential environmental impact. This includes construction, transportation, clean energy, property development and tourism. The results will affect workers and businesses throughout the economy.

Decades of experience in organizing have placed the Grand Coalition in a position of superiority in terms of cross-collaboration and public message development. However, there may be reason for hope. Those who believe it is possible to meet social, economic and environmental needs through investment and enterprise do, however, need to be successful in building coalitions of their own.

Status of the eco lobby in B.C. affairs

In recent years, much has changed in how environmental lobbying organizations operate. The emergence of multiple coalitions to pursue distinct baskets of aims is the most significant new trend. These coalitions in some ways appear to be nimble and loosely constructed, with little evidence on display of top-down message control. They do not have project names, suggesting they are not part of public campaigns that require more detailed branding development.

The ability to map these organizations is partly due to increasingly stringent lobbying registration rules that require actions to be registered that previously would not have been easy to see. This raises the question of whether we are seeing things that are truly new, or we simply have new ways to see what previously existed and is now brought into the light of day because of the changes. It’s difficult to say for sure what the situation is.

Anecdotally, those with awareness of how lobbying works in practice are surprised to see the level of activity and coordination revealed here. If nothing else, these coalitions probably allow the various organizations involved in them to avoid duplication of effort. They may also allow for fundraising coordination and focus. The appearance of massing and unity on issues would also be an appealing strategic choice for the lobbying organizations as a way to signal to the bureaucracy and their political targets that they have scale and cannot be ignored.

The Grand Coalition: Environmental influence taken to a new level in 2020

We identified six major coalition movements that were active in 2020, and for discussion purposes have labelled them A through F. Each coalition has one or more significant, unique goals.  In several cases, the coalition agenda is sprawling and the distinguishing features aren’t immediately evident. Four broad themes are at work. Each constitutes some kind of threat to investment intentions, the health of rural communities, and a successful economy that benefits all British Columbia residents:

A feature of interest is how seven major environmental groups (many of which disclose heavy reliance on support from organizations outside Canada) have banded together during Covid-19 for a sweeping lobbying effort on multiple fronts (see table below). A number of others are also involved, but these seven provide the core of a “Grand Coalition” framework where fluid communications and alignment make for maximum success. To undertake the activities described can only have been advanced with significant coordination in place. 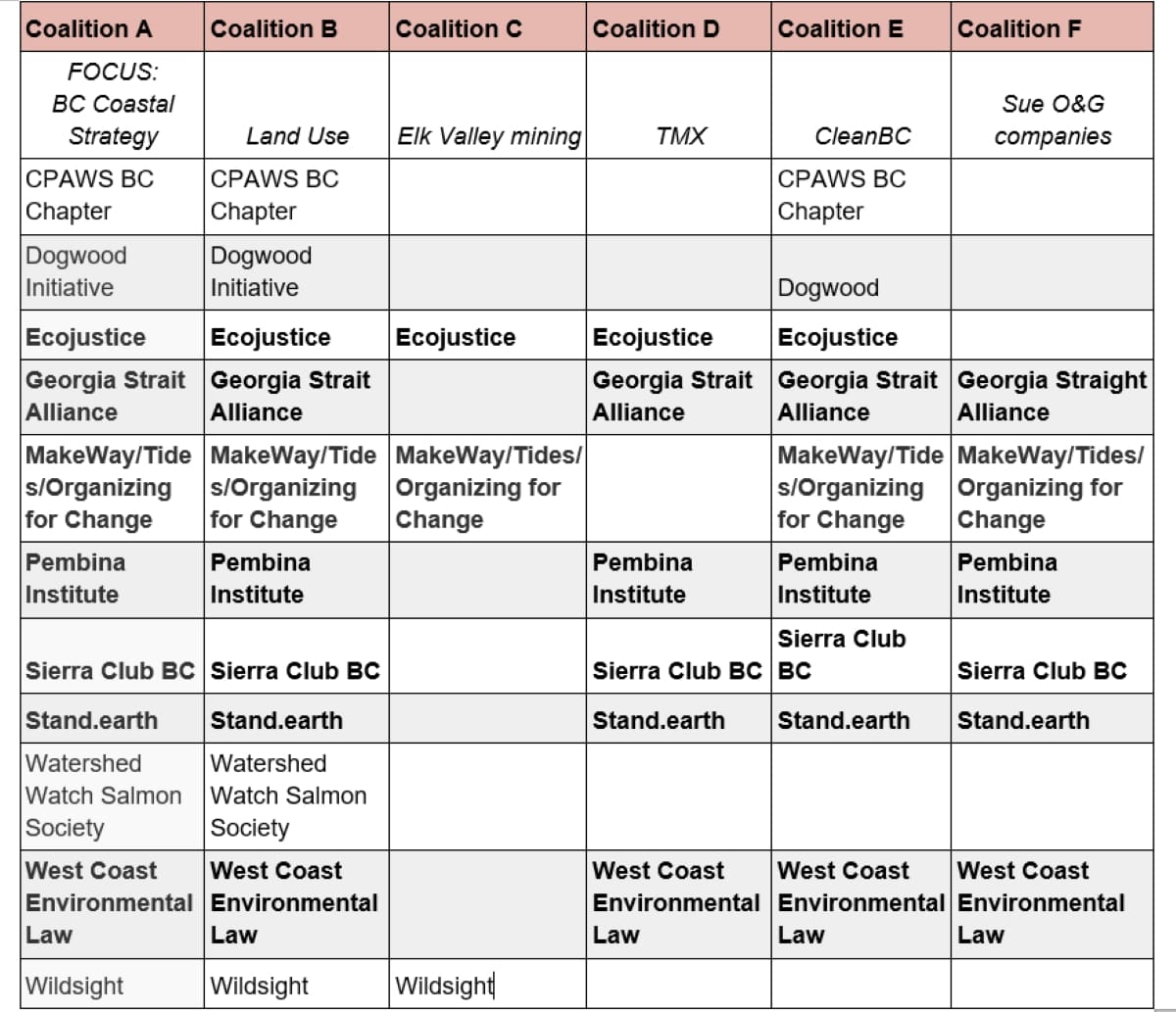 None of the coalitions appears to have an operating or working name, hence the labels used in the discussion here (Coalition A, B, C... etc). The core group of seven major organizations are registered as members of five out of the six coalitions, advocating in concert on a vast range of issues. They are: Ecojustice, Georgia Strait Alliance, MakeWay (aka Tides Canada, Organizing for Change), Pembina Institute, Sierra Club BC, Stand.earth, West Coast Environmental Law.

The Hive and the Swarm

NDP Environment Minister George Heyman has attempted in the past to gloss over his tight relationship with environmental lobbyists, on one occasion refusing to disclose which organizations he has met with in private. The protest sector in British Columbia is sufficiently mature that radical factions bearing monikers like the “Hive” and the “Swarm” are able to organize protests with ease.

The eco pressure groups seem uncomfortable with the level of public scrutiny that has allowed us to develop the observations in this paper. In September 2020, Georgia Strait Alliance executive director Christianne Wilhelmson lobbied the Minister of Finance and the deputy minister of the Attorney General to discuss the impacts of the Lobby Transparency Act on the BC not-for-profit sector, while requesting unspecified amendments.

The Grand Coalition has been taking advantage of a static oppositional playbook, and it has to some extent recovered from damage caused by well-documented and persistent criticism about its motivations vis a vis foreign funding. Flipping the script, the coalition has stopped trying to obscure its financial dependencies: now, it is seeking to turn that into a virtue, in which success in attracting foreign foundation support is a badge of honour, validation that such investments are seen as worth making. Despite signs that exposition of foreign influence was affecting public opinion, by 2020 the argument that Canadians alone should be the ones determining the nation’s economic future had been deftly turned into further evidence to support the eco lobby’s cries of victimhood.

Meanwhile, claiming it had been wrongly attacked, master organizer Tides Canada simply rebranded itself as MakeWay while shifting some of its operations to another organization it controls, Organizing for Change. By 2021, it was safe to say that the “middle ground” of public opinion was less affected than it previously was by concerns about outside orchestrations affecting project outcomes.

Ironically, the shape-shifting of recent years includes moves toward lower transparency and alternative funding mechanisms. For example, Grand Coalition member Stand.Earth appears to have benefited in 2019 from a $2 million U.S. foundation gift to an individual who is a leader in the organization, in a giving category that escapes both U.S. and Canadian financial reporting transparency. 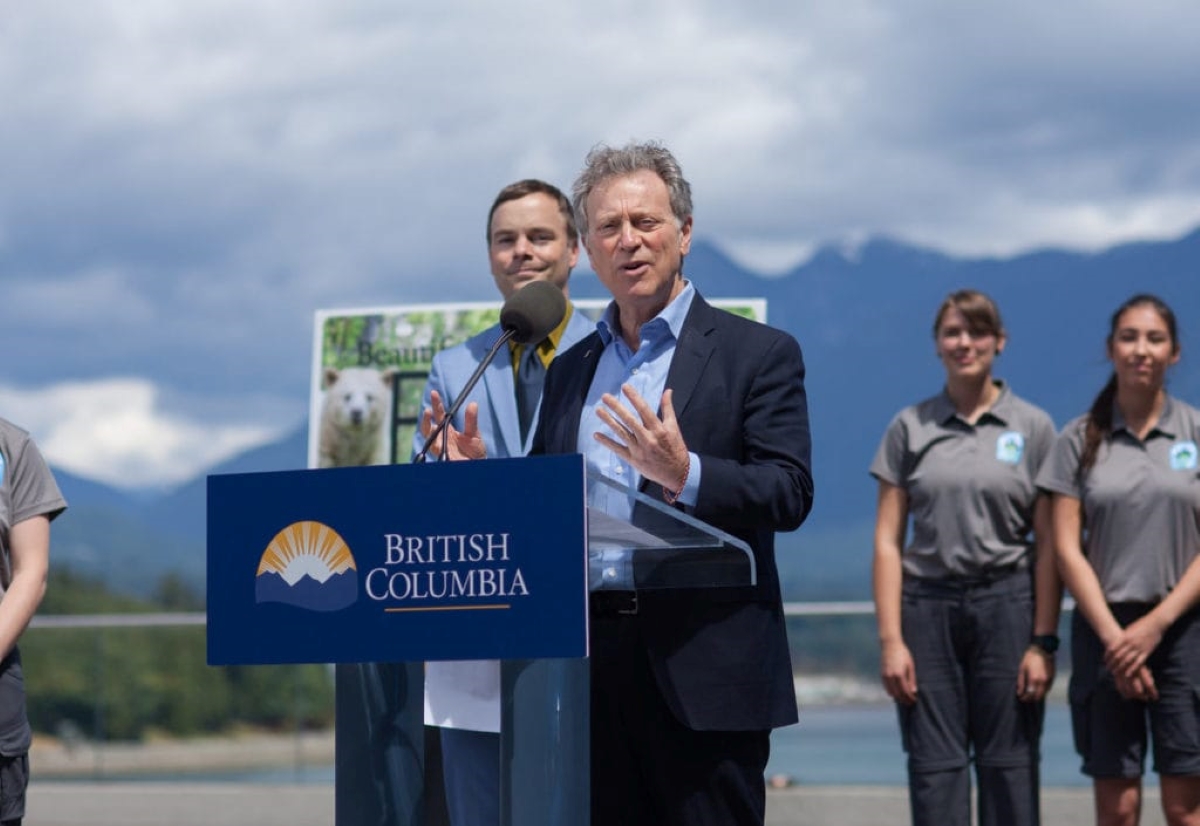 Another sign that we are in new territory is that the Grand Coalition has been incredibly successful in creating and controlling propaganda vehicles that to the average content consumer are simply more brands in a diverse media ecosystem, rather than adroit vehicles for fuelling the aims of the Grand Coalition (prime examples: The Narwhal and National Observer). If a lobbying effort is underway on an issue like old growth forestry or oil tanker safety, such “owned media” outlets can be counted on to run companion articles that tout to the public the same asks being made inside government. Thus, the Grand Coalition does not simply benefit from having privileged access to the media vehicles it spawned, and to the audiences clustering around those vehicles; it depends on them as part of the fabric of advocacy efforts. This cannot be said of media outlets that generally lean toward rational discussions about economic balance, nor can it even be said of the business press.

Inasmuch as the pro-economy coalition has benefited from limited but consistent support from some corners of legacy news organizations where journalism as it was once defined is still practiced, the new content models created and controlled by the Grand Coalition are slowly but surely building their audiences and influence. As traditional newsrooms wither, the influence of the Grand Coalition grows.

To further accentuate the contrast, the new vehicles (Observer, Narwhal) have been entrepreneurial in turning the $50 million federal Local Journalism Initiative (LJI) into a source of income and a supply of low-cost journalism talent all too ready to propagate the house philosophies. Funding is available to eligible Canadian media organizations to hire journalists or pay freelance journalists to produce civic journalism for “underserved communities”. Stories produced by LJI reporters are made available to media organizations and the public via an online portal managed by The Canadian Press.

The strategy of the Observer and the Narwhal appears to be to take advantage of the decline of local news media outlets, which have been particularly hard hit by Covid-19. According to the COVID-19 Media Impact Map for Canada (a joint project of the Local News Research Project at Ryerson University’s School of Journalism), during the first eight months of the Covid-19 pandemic, 51 Canadian news outlets had temporarily or permanently closed, 141 outlets reported layoffs or job losses, and 2,553 editorial and non-editorial jobs were cut temporarily or permanently.

Meanwhile, eco-left publications have received federal LJI funds to expand their coverage, the results of which are then distributed free of charge to broad audiences. For local publications that have lost staff but still have space to fill, LJI content represents an inexpensive way to provide Canadian content to their audiences. During one recent 5-day period, 36% of the British Columbia LJI stories were generated by the eco-left publications, carrying a steady diet of content with headlines such as:

While it can certainly be argued that some of this material has news merit, what has happened under the LJI is there has been a broad shift in the overall tone of news media. Industry, no matter its actual performance, is increasingly treated as inherently a negative factor. From a bystander point of view, there may be an assumption that social attitudes have changed; but the reality has more to do with determined communicators realizing the potential of the LJI to create a force multiplier effect. Publications like the Observer and Narwhal that were once relatively small-niche websites are now furnished with taxpayer-paid reporter positions combined with a national distribution network that all news publications have free access to.

Game over? Or will the pro-economy coalition fight back?

In summary, the Grand Coalition has been incredibly resourceful in adapting to change. Where it finds unlocked doors, it is pushing them open and passing through. It is constantly seeking to evolve and be responsive to changing public conditions. Its media extensions have been entrepreneurial in reaching larger audiences and skewing the general media conversation in the direction of eco-extremism and away from balanced, business-supportive coverage.

If the same could be said of the pro-economy viewpoint, we would probably be looking at a very different situation. But it can’t be. There has not been a strategic adaptation to the new conditions. Nevertheless, it should be possible for those who understand the situation to also look at freshening up their approach to be resilient in the face of change.

Stewart Muir is an investigative journalist, founder of Green Growth BC and executive director of the Vancouver-based Resource Works Society.