Because of the resource economy, high tech jobs are going from strength to strength

In the quest for resource innovation, high technology is creating jobs and building the green economy.

When the BC statistics office recently issued its high technology sector report, those who cover both the natural resource sector and innovation knew it was just a matter of time before someone would try to cast the story as "low tech" natural resources being replaced in the provincial economy by new, modern, desirable high tech.

Sure enough, Victoria's Times-Colonist was first off the mark: "According to figures released Wednesday by the provincial government, the tech sector, which employs about 20,000 directly in Greater Victoria, employs more people around B.C. than the mining, oil and gas, and forestry sectors combined." Recently, we heard the same statement made by a number of speakers at the BC Tech Summit.

Just one problem with the characterization: this hoary cliché doesn't work in 2017 any more than it did when we last read the identical comparison in 2014. The fact is, resources are driving high tech investments and jobs.

The knowledge economy is our future and we should all be pleased when it grows. But it's time to stop kidding ourselves about where innovation actually takes place. Maybe the resource sector wasn't always high tech, but today there is no doubt it is totally reliant on the practical application of scientific knowledge. Canada is a world leader in fields like mining, and consequently it is a world leader in mining technology and innovation.

It's a great thing when vital high-tech activities are gaining ground whether that is to improve health care, transportation, filmmaking, creating accurate 3D images of buried ore deposits, or drilling for natural gas.

Mining, oil & gas, forestry are huge consumers of software, hardware and people services that increase efficiency and profitability and empower better protection of the environment. They compete in cutthroat global marketplaces that require constant innovation, and they are bound by stringent processes that require accurate measurement. 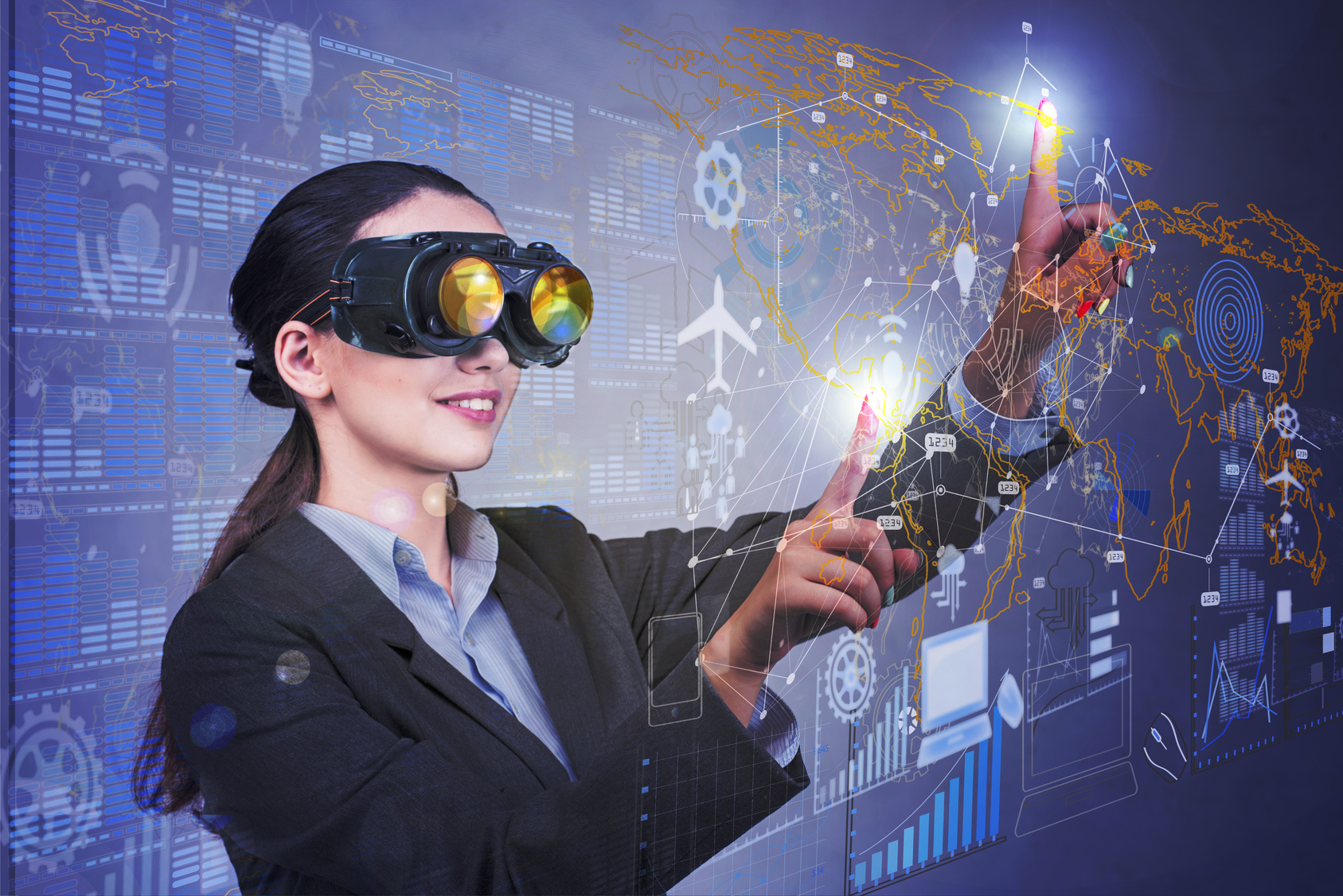 When we hear that high tech jobs are outstripping resource jobs, it has to be remembered that a lot of those high-tech jobs are simply the reflection of capital-intensive resource industries making investments in productivity. In the five year period 2012-2016, mining and oil & gas investment in BC totalled $31 billion, making resources second only to housing for capital investment. Two thirds of this goes to building things, one third toward equipment. (See this annual report, page 76, for the evidence.)

For example, the high tech study counts "engineering services" as high tech, and with 1,870 jobs in 2015 engineering is actually one of the larger categories of high tech employment.

Yet common sense tells us that no resource project can exist without engineers. Growth in engineering jobs is beneficial, but surely does not mean that "resources" are being eclipsed by "high tech". When both high tech and resources work together, we are on track to create sustainable, well-paying jobs. These in turn will generate the wealth that helps pay for our schools, our hospitals, our roads, our transit system, and other services.

When the “high tech industry” is measured and quantified this is done by adding together individual industries deemed to be high tech in nature or shares of official industries that are thought to be partly high tech. Years ago, BC Statistics went through an exercise consulting experts about what should be classified as high tech. The result is “high tech”, an amalgamation of many industries and parts of many industries. The list includes a very broad range of industries or parts of industries drawn from manufacturing, many different services, communications, digital media and so on.

Green tech is another example. There is no green industry. But people do try to measure it by pulling out segments of existing industries that could be considered green.

Diversifying the economy so it is greener and more high tech is, of course, a no-brainer. And we do need ways to measure and talk about progress. But the habit of mind that says other industries, like natural resources, need to be torn down to accomplish this is both damaging and consequential. Policy decisions rest not just on verifiable information, but on how decision makers are reading public attitudes. Misinterpreting the data carries real, and costly, consequences.

Unfortunately, the statistics office itself has routinely fostered this misapprehension in its news releases accompanying the report's release, as if there was some kind of competition between high tech and resources. Reporters scrambling for an angle seldom have the deep technical skills needed to understand the data. Racing toward deadline, they will go for a clean, easy conflict angle that seems validated by "conventional wisdom".

And so for another year, a foundationless impression is reinforced.

Most puzzling of all, it seems like BC Statistics uses one set of data to report on the labour market, and another set to produce the technology report. 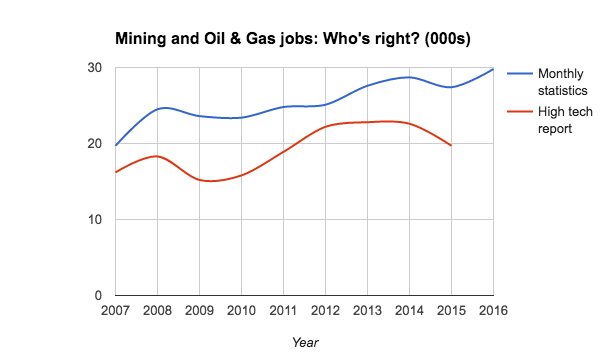 Table 11 of the recent Technology report (red line) puts the number of mining and oil and gas extraction jobs at 19,700 for 2015. Yet the bureau's own monthly Earnings and Employment Trends report, January 2017 edition (blue line), has a totally different figure for 2015: 27,400.

The high tech report appears to understate the number of mining and oil & gas jobs by 7,700. Its data also implies a withering trend in resource employment. The labour market data contradicts both points since it shows growth as well as a higher sum. So from a labour perspective, the eclipsed-by-high-tech angle of the high tech study is unsupported. Indeed, in the decade to 2016, mining and oil & gas jobs actually expanded by 33.9 per cent. How does this "declining" sector compare to high tech? In the 10 years to 2015, high tech grew by just 15.7 per cent. Nice, but disappointing by contrast.

It's one thing to acknowledge that nearly 8,000 mining/oil & gas jobs are "high tech". But please - let's not have to hear again in future that this means the resource industries are on the way out.

And just look at the spread between those lines from 2012: it is getting wider, indicating that the high tech column is filching progressively more resource jobs each year because resources are apparently going through some sort of technology growth phase.

Let's examine this more closely by checking out the original data - Figure 1 is from the new high tech report and seems to lowball jobs in mining and oil & gas; Figure 2 is from the monthly labour publication released on Jan. 5: 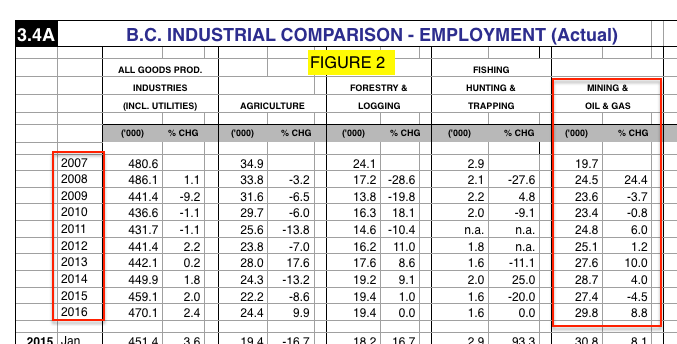 British Columbians who believe that resources are less relevant will make decisions feeling they are well informed. They will be more apt to read articles like this one uncritically, without reflecting on the fact that the number one proof point the writer offers that BC has gone "post-resources" is a company (MDA) that has used high tech satellite technology to serve resource companies around the world. (MDA is routinely announcing new contracts for services that support resource activities including safe sea transportation and oil & gas exploration.)

If citizens' understanding of foundational knowledge is misplaced, who can blame them for how they evaluate their options and make decisions as voters. This is a serious issue.

Let's hope BC Statistics gets the message that they could do a lot better in future in how this valuable work is communicated. One simple thing they can do next time is rewrite their news release template to do away with tedious, divisive and misleading comparisons.

Since we're dwelling on stats, here are some figures, from the BC Statistics labour report, that show just a few of the attributes of resource jobs that make them stand out in the economy:

The evidence for the Resource Works tagline – Jobs for BC, Innovation for the World – could not be stronger, despite these powerful counterarguments. It's clear that the search for middle ground on resource topics is far from over.

Resource Works executive director Stewart Muir spent years leading teams of journalists covering business, political, and general news. As a data journalist, he led national coverage of census data releases for print, digital and broadcast audiences and he developed tools allowing high-speed analysis of election results. Financial analysis software he developed for displaying market data was successfully marketed by The Associated Press in the United States and Canada, and he launched an innovative startup called Pagemasters that serves newspaper companies including the Globe and Mail and the Toronto Star.