Building trust: A project for 2017

A common thing heard from resource people is: have we lost the battle for public trust? Positive signs on a number of fronts point to some useful emerging models for developing the economy-environment story. 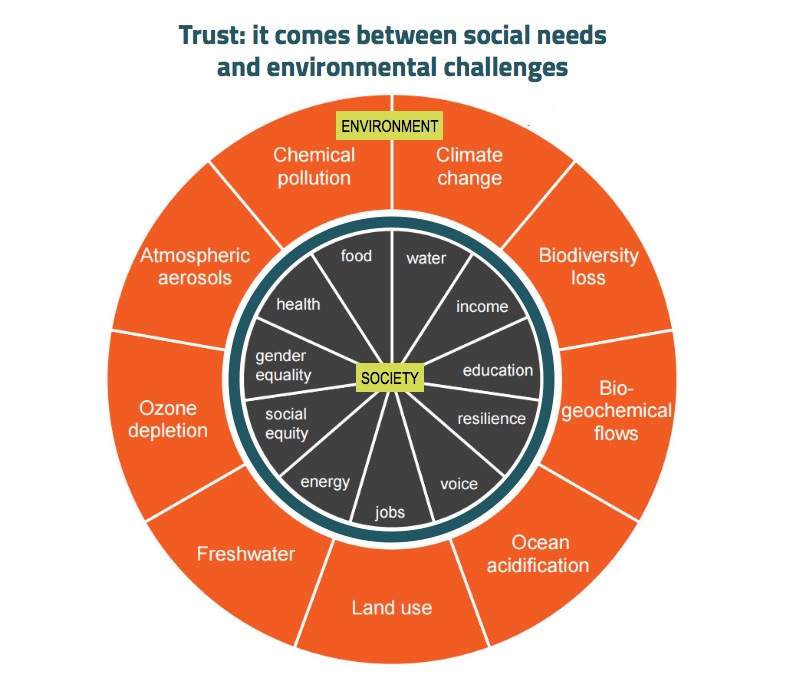 This image is adapted from a new paper arguing that organizations are "falling short when it comes to goal-setting and reporting against planetary boundaries and social thresholds."

A new generation of graduates is entering the resource workforce feeling societal pressure to take a bigger-picture view than they think their parents did. Consumers and younger professionals "are increasingly drawn toward these ideas because they seem to provide a means of resolving the differences that are creating friction across society," according to Sustainable Brands. More and more, expect to see younger colleagues framing their thinking in terms of ideas like circular economy.

The illustration here aptly shows how this breaks down.

At the level of society, we are faced with providing for numerous needs, each one with its own set of challenges. That's the inner part of the circle in the diagram.

The outer circle represents environment, and this breaks down into many issues. Taken together, these two concentric circles account for the conflict and pressures we see on everything from oil pipelines to ski resorts to wind farms.

We've further adapted this visual drawn from a new study on planetary boundaries. We've added a green ring between Environment and Society to denote the role of trust.

This fall in Ottawa we saw resource thinkers gather to discuss the trust problem as it applies to energy. They came up with a number of concepts that we'll no doubt be hearing more about soon with the publication of a paper entitled A Matter of Trust: The role of Canadian communities in energy decision-making.

The question of trust in natural-resource decisions will be tested in coming weeks in western Canada with the anticipated final cabinet approval of the green-lighted Trans Mountain Pipeline Expansion. This project has support across the broadest part of the Canadian political spectrum, with some significant gaps. Where there is opposition, in parts of coastal British Columbia, that opposition can be fierce indeed.

Nobody is anti-food or anti-health, just as there is nobody who is pro-ocean acidification or pro-pollution. To understand those who are not ready to acknowledge trust in made-in-Canada processes, the diagram above may help if the first priority is to understand the thought processes of others.

TMX is not the only big decision that politicians will be making on resource issues in the near future. The challenge of building trust is already shaping up to be the major social trend in Canada into 2017.