The problem is a provincial tax structure that hands an advantage to competitors in other parts of the country and elsewhere in the world.

The pulp and paper industry is a quiet yet high impact employer in BC. It counted 10,000 workers in British Columbia in 2015, a figure that has been fairly steady with some ups and downs in recent years.

The export value of pulp and paper is a whopper at $4.4 billion, slightly less than the combined value of all metallic minerals exported from BC in 2015. A year’s worth of BC pulp and paper output is nearly enough to supply all of Canada’s needs.

Yet the industry argues it is struggling to remain globally competitive and profitable. On a visit to the Domtar mill in Kamloops, I heard from executives who gamely described how the plant was doing its part for the environment via the carbon tax. It sounded like they were masking some discomfort with an added expense that other jurisdictions had not adopted, yet they weren’t prepared to make a fuss about it.

Well, now they have some industry colleagues who are making a fuss. And it’s not just corporate bean counters asking for action: four of the province’s top industry union leaders have urged action.

The provincial government gave them an opening recently when it raised the idea of modernizing the Provincial Sales Tax (PST), presumably to restore some of the benefits British Columbians briefly (albeit reluctantly) enjoyed during the short-lived Harmonized Sales Tax.

The HST was arranged with all the care of Donald Trump’s coif, yet lacked The Donald’s staying power when gale-force political winds blew up.

Studies and working groups have examined the issues facing BC’s forest industry,  one that most people readily associate with green values. What’s on the table right now is to relieve the PST burden from forestry. One way to do that is to simply lop off the tax that applies to electricity, which incidentally is almost totally a renewable, carbon-free product in British Columbia because it comes from hydro dams.

The provincial government plan to secure the industry’s competitiveness, and the rural jobs that depend on it, urged (see page 19) the government  appointed  Commission on Tax Competitiveness to "consider the critical links with forest sector competitiveness in its examination of ways to modernize the PST.”

As it happens, the Commission did just that. When it reported out in November 2016, it recommended that government exempt electricity and energy for industrial and business use from the PST.

In their submission to the Commission, Catalyst Paper, which operates pulp and paper mills in Crofton, Port Alberni and Powell River, placed an international lens on the PST. The picture they paint is depressing. This chart, showing the combined whack that an average BC paper mill takes compared to those in 20 other jurisdictions, was drawn from a PwC study entitled Thermo-mechanical Pulp and Paper in British Columbia: Energy and Taxation Competitiveness Study: 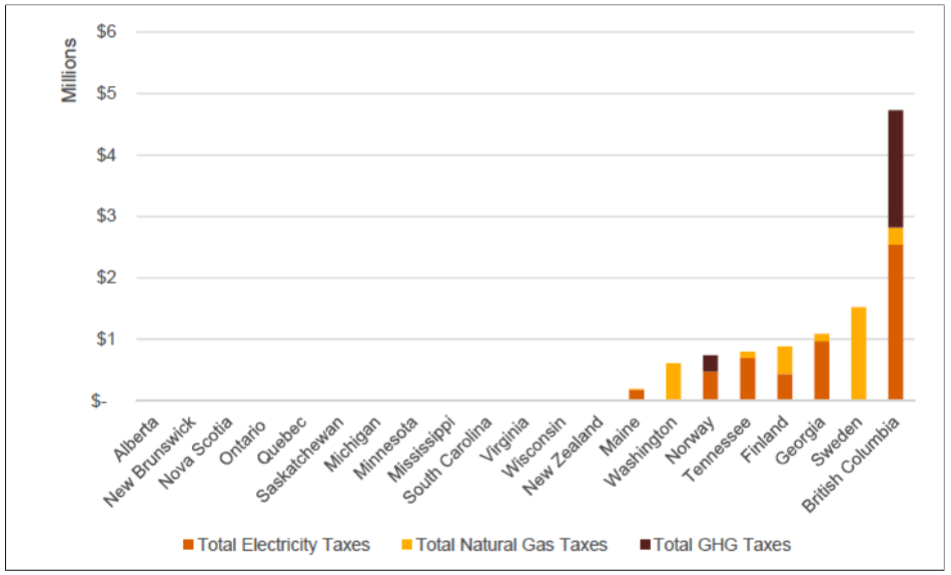 British Columbia, the bar at far right, is dramatically higher than second-place Sweden, whose mills pay no carbon charges under a cap and trade system. The triple whammy of electricity, natural gas and various climate taxes appears to create a clear disadvantage.

Catalyst argues that BC's 7 per cent PST on purchased electricity means that bleached chemical thermo-mechanical pulp (BCTMP) and paper mills in British Columbia face a 7 per cent cost disadvantage compared to mills in the 20 competing jurisdictions.

Catalyst helpfully notes that other BC exporters like miners, forest companies and cement manufacturers face the same 7 per cent cost disadvantage when exporting their products or selling within Canada.

What a quandary for government if, suddenly, a large number of energy-intensive manufacturers get in line for a tax cut. One arm of government clearly wants to see a more competitive and viable industry; meanwhile another arm, just as worthy, has to fund the ever-rising costs of government services.

Catalyst argues that eliminating PST on purchased industrial electricity "would represent smart tax policy”. The company continues: "BC Hydro is currently facing surplus capacity, and the marginal contribution related to the price elasticity for power will have the effect of reducing the burden on ratepayers.”

The report points out that BC’s electricity supply is 93% from renewable hydro. Eliminating the PST on purchased power will thus “encourage substitution from fossil fuel to clean energy and thereby help to support the province’s climate change objectives.”

Urban residents are mostly oblivious to the powerful benefits they derive from pulp and paper activity. This is due perhaps to the location of all mills in communities outside of Vancouver and Victoria, and the fact that much of the product moves invisibly to market inside the opaque walls of shipping containers.

Yet it is here that otherwise fairly low-profile parts of the province really shine. The Cariboo, for example, all by itself produced over $1 billion worth of paper exports in one recent year, according to a study by the Urban Futures Institute.

Whether urban or rural, residents are warm to the knowledge that forestry qualifies as a green, renewable sector. This showed up prominently in some polling Resource Works did back when we launched in 2014.

And the value of sectoral jobs cannot be overestimated. One collective agreement currently in place guarantees $50.30 an hour for a general foreperson, and even the lowliest apprentice draws $28.99. In fact, pulp and paper is the second highest paying industry in British Columbia next to mining.

Pulp and paper is also a highly innovative space. James Spankie of Canfor, who I met a couple of years ago at an environmental event in Vancouver, recently related how specialized flame cameras are being used to optimize heat efficiency in the company's kilns and turbo generating equipment to take the steam that runs the mills and generate electricity.

With all those things in mind, a fresh opportunity is looming for the Province of BC to right some past wrongs.

As the BC resource industries awaken in Prince George this morning for a homespun version of Davos, resource companies, communities and labour will be optimistic that a green, job-preserving solution for the PST will present itself in the provincial budget on February 21.