There is a fascinating irony to British Columbia’s often polarized discussions in the so-called “economy versus the environment” debate. It is how seemingly natural adversaries have worked together quietly, often over long spans of time, to devise solutions that both sides can live with.

One example is the Great Bear Rainforest, the sprawling natural forest on British Columbia’s central coast that has now grown, thanks to protections kicking in, to an area equal to 7,800 Stanley Parks.

Years since a landmark agreement ended British Columbia's infamous War in the Woods, the final stages to secure the Great Bear will be reached this fall. Completion of the agreement is a monumental achievement – the largest successful conservation effort in North America – that carries the potential for replication elsewhere.

Meantime, it’s shaping up to be a different story on the west coast of Vancouver Island where the Walbran valley has long been a site of environmentalist-forester confrontation.

Two decades ago, then-forests minister Dan Miller (now a Resource Works Advisory Council member) reported to the Legislature that 34 tree spikes were discovered in the Walbran, having been "deliberately inserted in such a fashion as to prevent their detection and to cause them to fly out of the tree when struck by a saw blade."

A pact was eventually reached through the work of the Commission of Resources and Environment (CORE) after what is remembered today by those at the table as unique, lengthy, intensive, detailed and collaborative work.

It was a three-year process that shaped the way we have managed forests on Vancouver Island ever since.

The plan increased the area of B.C.’s parks and conservation areas in the coastal region. It included the expansion of the Carmanah Pacific Park to include the lower Walbran, forming the new Carmanah Walbran Provincial Park.

In total, this amounted to the addition of nearly 13,000 hectares of parkland. Such undisturbed, natural forests are not available for harvest.

Despite this clear win for forest preservation, peace in the Walbran has been elusive. With logging plans today moving ahead outside of the park boundaries, just as provided for through the agreed process, there have been stirrings of renewed anti-logging protest movement.

To get a flavour of what these voices are asking for, here is what three protesters shared at a Victoria event during the summer of 2015:

These folks don't hold back in their passionate expression of the spiritual connection they feel to BC's coastal forests. Factors such as biodiversity, wildlife, fish, recreation, water, timber, and cultural heritage are vitally import – and they all listed as key management considerations in deciding whether forests in the Walbran area would be harvested.

In fact, the area that has attracted these responses relates to a Higher Level Plan Order made in 2000 designating for “sensitively managed harvesting" 2,600 hectares along the east side of the park portion of the Walbran Valley. This included an area known as “the bite” and any forestry in the area has to be managed for old-growth forest retention with an emphasis on stream-side areas and recreational access management.

Common ground should be achievable for those willing to recognize the dependencies we have on natural resources and the need to use them responsibly.

The Walbran is a source of western red cedar, one of the most prized and versatile green building materials. Coastal First Nations have long used it for housing, totem poles, carved objects, baskets clothing and jewellry. The area of the approved Walbran cut is in the traditional territory of the Pacheedaht First Nation and they have expressed no concerns, according to B.C. Ministry of Forests spokeswoman Vivian Thomas in a Vancouver Sun report. (A letter to the editor in The Times Colonist took issue with this statement.) 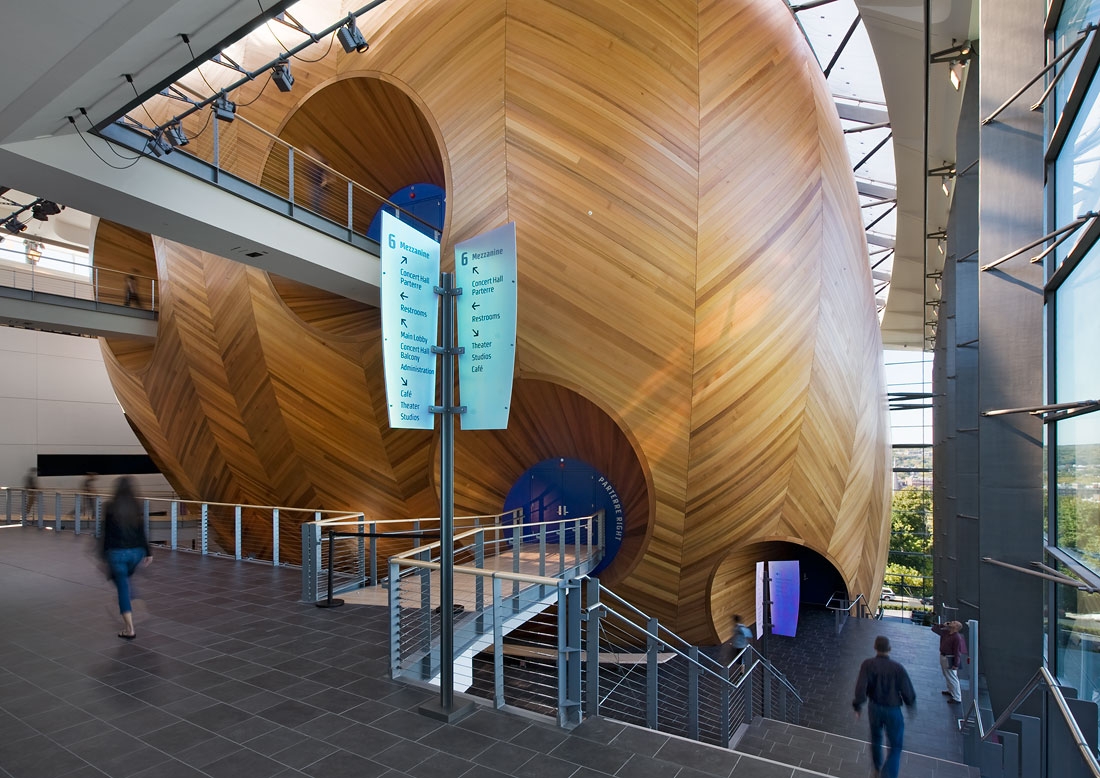 Every year when the latest innovative buildings using cedar are showcased at the Wood Design Awards, it seems like a new threshold of resourcefulness and respect for the materials, in markets far and wide, has been crossed. This photo of the Experimental Media and Performing Arts Center at Rensselaer Polytechnic Institute in Troy, New York shows the versatility and appeal of wood from areas just like the Walbran.

There is no evidence that the protesters are aware of peer-reviewed academic work showing that western red cedar produces fewer greenhouse gases, generates less water and air pollution, requires less energy to produce than alternatives and comes from a renewable and sustainable resource. Western red cedar is also carbon neutral.

The 1990s was when laggards in British Columbia forestry methods were finally hauled into line – and not always willingly. Producers of western red cedar today can legitimately show they have delivered to commitments to:

The BC forest industry has a lot to be proud of, in part because a new generation of eco-conscious professionals has come of age since a strife-ridden phase that is now in the past. The video below is a fair (admittedly polished) reflection of some dominant attitudes among today's wood professionals. Anyone taking the time to go out and talk to people in these fields today would quickly discover this for themselves.

Is there work yet to be done? Some say there is. The opposition BC NDP remains critical of government changes to the Forest Act in 2002 that gave forest companies the responsibility for land-use planning and there is no question a watchful eye is needed. Even so, NDP MLA Bill Routley, who was involved with the land-use talks in the early 1990s, told Business in Vancouver that "[a]lthough he recalls environmental groups not getting everything they were asking for, “a lot of what they wanted was achieved.”

It’s easy to see why the situation is frustrating for those who negotiated in good faith in the 1990s to secure today’s extensive protections alongside economic use of the forest. Suggestions that "civil disobediance" is now being contemplated strike a sinister chord for those aware of the physical injuries that workers in the woods and in mills can suffer from tree spiking. Spiking is a serious criminal offence.

Years ago, even at a time of strife in the Walbran, Dan Miller sounded a note of optimism on forest progress when he complimented the environmental movement for working hard to establish a meaningful dialogue on land use.

His hope at the time was that a "positive working relationship will flourish" and allow all parties to reach agreements on the future of land use in BC. The environmental movement, sometimes reluctantly, found middle ground. The harvest long slated for the Walbran may be a litmus test for how well these processes can withstand the test of time.

The Teal-Jones Group, which received permits that will allow it to take about 90 truckloads of cut logs out of the Walbran, will process the logs in BC into various wood products through the efforts of about 1,000 people who hold quality, long-term jobs.

The forest industry says it has upheld its end of the bargain. It is not disputed that since the 1990s, the world of forestry has been transformed for the better.

Fair recognition of well-managed Walbran harvesting is how the environmental movement can show it, too, can deliver on commitments. 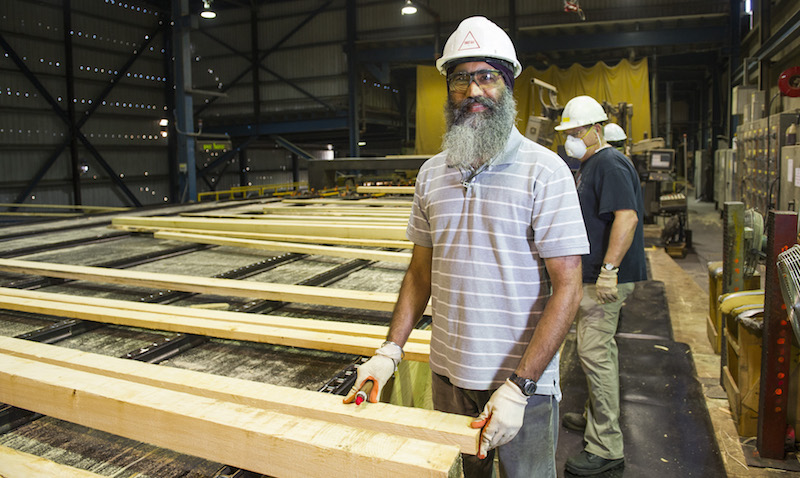 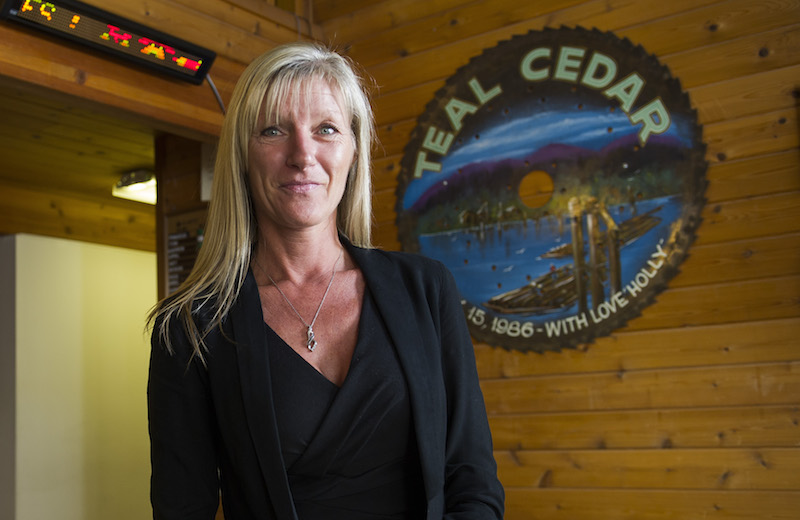 Workers at Teal-Jones in Surrey, a family-run BC company that has been operating for more than 60 years. Richard Lam photos.