The contribution of the B.C. resource sector is large enough to be the financial backbone of infrastructure projects like transit tunnels or of public-education improvements.

This article originally appeared in The Province newspaper. 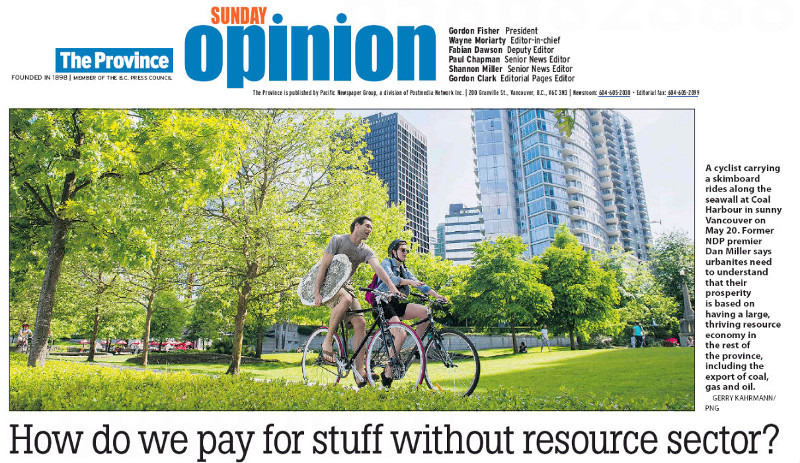 As taxpayers wrestle with another government/teachers collective-bargaining process, and voters look to municipal elections across the province in a little less than six months, let’s get some things straight about the B.C. economy.

First, there is no question that Vancouver and its environs constitute a world-class urban environment. But the Vancouver region is not the centre of B.C.’s universe. In fact, Vancouver is at least as dependent on the natural-resource economy across the province from Port Hardy to Fort St. John as those resource towns are dependent on Vancouver.

You know the towns I’m talking about, where natural resources are turned into valuable export commodities like natural gas, salable minerals and forest products whose value then filters down through the entire B.C. economy, creating employment and a whole host of other economic benefits.

Resource Works recently showed the extent to which the B.C. resource sector drives jobs — more than half of which flow to Vancouver in the form of all those business and financial services purchased by the sector from suppliers, many of them based in the city.

While it should be fairly clear to readers that Vancouver is, in fact, resource-dependent, sadly it’s not clear at all.

So it’s ironic that Vancouver Mayor Gregor Robertson would support a motion banning the handling, storage and trans-shipment of coal at Vancouver’s marine terminals and berths, while on the other hand he asks senior governments to pony up perhaps a billion dollars to dig a tunnel down the Broadway corridor to help solve the city’s traffic congestion.

Granted, no coal currently moves through Vancouver, so his ban is largely symbolic. But where will the provincial and federal governments find the revenue for a costly tunnelling project if Robertson’s proposed ban on coal were to spread beyond his borders to neighbouring municipalities, where such a ban would have a crippling impact on public revenues?

Further, where would Japan source its metallurgical coal in order to manufacture the high-grade steel components the Broadway project would require?

On a similar note, there’s something equally ironic about a teachers union that pushes for additional studies into the well-studied question of coal shipments and health — not to mention that positions itself against bitumen pipelines — and then looks for a 13.75-per-cent wage increase over four years plus contract improvements to class size, composition and specialist teachers.

The leadership of the B.C. Teachers’ Federation has a right to represent its members’ interests aggressively. But to me it is astounding to see them, at the same time, campaign against a resource sector that helps to pay their wages.

The BCTF’s opposition to the transportation of oil in pipelines or coal on trains makes little sense when these industries operate in a responsible way, employ thousands of British Columbians and contribute enormously to the maintenance of our health care, education and social-service programs.

Last year, a PricewaterhouseCoopers report found that coal contributed significantly to the B.C. economy through employment, tax revenue and contribution to provincial GDP. The report stated that in 2011, the coal industry generated an estimated $3.2 billion in provincial GDP. That’s real money.

Equally important, more than 26,000 B.C. jobs can be attributed to coal. The average yearly wage for workers directly employed by coal companies was an estimated $95,174 in 2011 — more than double the average provincial wage of $43,500.

Taken together, natural resources revenue for B.C. in 2011-2012 totalled about $2.8 billion against B.C. taxation revenue of $20.2 billion, although it fluctuated from year to year between $2.5 and $4.5 billion, mostly as a result of natural gas royalties.

But no matter how you slice it, we’re talking about very large numbers. The contribution of the B.C. resource sector is large enough to be the financial backbone of infrastructure projects like transit tunnels or of public-education improvements.

The real question is: Is there an appetite among urban municipal and BCTF leaders to acknowledge the contribution of resource development to their own aspirations, or will they continue to want their cake and eat it too?

My participation with Resource Works is my attempt at getting more people to question the fundamental contradictions I see in the positions of some urban municipal and BCTF leaders.

Dan Miller is a member of the Resource Works Advisory Council and the former premier of British Columbia.

The 7 myths of BC's resource economy