Originally published by The Vancouver Sun.

So, you’re parking both the family car and the transit pass, biking to work instead and feeling a tad righteous about helping British Columbia wean itself from its dirty addiction to the mining industry and the minerals it extracts.

Say thanks to a coal miner for the privilege. And don’t forget the hardrock miner. Not to mention the smelter crew and the roughneck yanking pipe on some frigid drill rig.

Oh, and say thanks to the trucker hauling canisters of molybdenum, titanium or tungsten concentrate or the geologist staking gold, silver or rare earths deposits.

Without them and the industries that employ them, you’d be walking, not biking.

Bicycles, unless you ride one you made yourself from bamboo, lashings of hemp and dried banana peels, are entirely manufactured from materials obtained by mining — steel processed by burning metallurgical coal, perhaps lightened by adding specialized metals like titanium; plastic and synthetic rubber obtained from petroleum products. 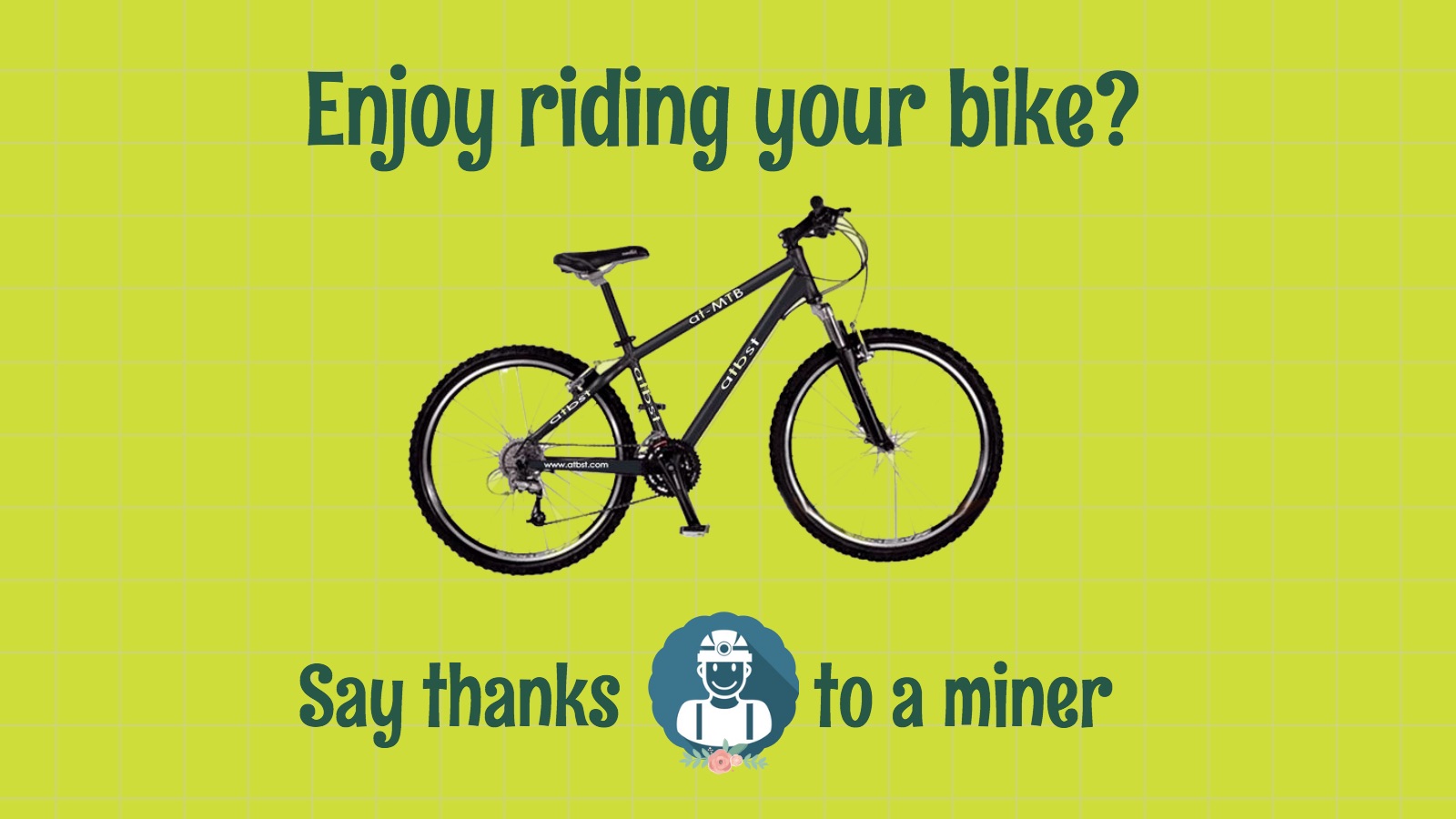 The building you work in, even if it’s a wood-frame structure, is full of metals and plastics in the form of steel framing and connectors, wiring, lighting, office equipment, insulation, surfacing, window frames, roofing, plumbing fixtures and so on.

Even the ceramic cup from which you drink your coffee while reading this contains the mineral zircon.

And if you get around to sending me a snarky email regarding my insensitivity to the environmental benefits of biking to work by drawing attention to this — pardon the pun — irony, you’ll be using mined minerals to deliver the message.

Your computer, tablet or smartphone contains iron, titanium, aluminum, copper, zinc, nickel, gold, silver, lithium, magnesium, mercury, yttrium, palladium, tin, cadmium, indium, lead, samarium, tantalum and, if you are still running an optical drive, gadolinium and dysprosium. The plastics are heat resistant with melting points above the boiling temperature for water and are comprised of acrylonitrile, butadiene, styrene and carbon.

The total greenhouse gas emissions associated with a MacBook: About 460 kilograms of carbon dioxide.

In fact, there’s even a calculation for the carbon footprint of an email. A long and tiresome one amounts to about 50 grams of C02, which doesn’t seem like much until you total them, and then the Internet turns out to have a carbon footprint of around 300 million tonnes a year. So keep it short.

If you want your criticism of these observations to be truly green, I recommend a stylus and beeswax tablets — they worked for the Roman army — or clay tablets like those on which we are still able to discern the grumpy note a Sumerian teacher sent home to parents complaining of a wayward boy’s lack of attention in class.

Don’t mail them, though. The postal service is heavily reliant on mined metals and petroleum-based plastics.

There is steel in the post boxes, delivery trucks, sorting equipment; petroleum-derived plastics in the postal carrier’s shoe soles, clothes, bags and so on.

Mind you, it’s inconvenient to deliver clay tablets by hand over long distances, even if you have a super-light titanium bike with minimum rolling-resistance tires, which is why metals and petroleum derivatives are so pervasive in the human environment.

And while I’m an advocate of green transportation, bike riding in particular, which lowers the human carbon footprint, I don’t buy into the sanctimonious righteousness that so often accompanies the decision. We’re all in this, not just some of us.

The analysts who crunch these kinds of numbers calculate that manufacturing the average bicycle, using steel, special additives, plastics and rubber, results in the release of about 240 kilograms of greenhouse gases. Every bike manufactured uses about the same amount of energy and metals as a car door.

To recover the initial carbon footprint of your bike, you have to ride it at least 643 kilometres. Analysis comparing the carbon footprints of a family sedan and a bicycle conclude that assuming you cycle 12 kilometres a day for 15 years, the impact of the bike is one-tenth that of the car.

I relied on several sources for these insights, including one by a graduate student at Massachusetts Institute of Technology who is quoted in The Guardian newspaper; Mike Berner-Lee’s fascinating book How Bad are Bananas? The Carbon Footprint of Everything; and The Numbers Game: The Commonsense Guide to Understanding Numbers in the News, in Politics and in Life by Michael Blastland which The Economist cited as a best book in 2007.

So, riding a bike to work instead of driving three tonnes of steel and plastic has enormous merit.

Biking reduces the carbon footprint of your daily commute, it helps eke out increasingly scarce and therefore increasingly expensive resources, it reduces the wear and tear on road surfaces and finally, it’s good for your well-being — which is especially beneficial considering what would happen to our health-care system were it to do without steel for gurneys, beds, operating room mirrors, sterilization units, wheelchairs, X-ray machines, scalpels and syringes, etc.

The truth is that even the highest virtue is dependent upon one of the industries that is increasingly popular for those who don’t think too deeply to dismiss in knee-jerk reaction as dirty and unnecessary.

To make this observation is not to absolve the mining industry of its abysmal record of poor environmental stewardship or its historically cavalier response to those with the temerity to think it could and should do a lot better. Nor is it to belittle the goal of shrinking carbon footprints through conservation, recycling, repurposing or otherwise making our use of energy and materials cleaner and more efficient.

It is to say, get real folks. If you don’t understand the importance of mining and mineral extraction to the way you live, it’s going to be difficult to rationally effect the changes we can and must make to maximize benefits while minimizing consequences.

The fact is that without the metallurgical coal that’s shipped from B.C. ports to distant steel mills; without the petroleum products derived from crude oil and natural gas; without the metals mined and refined here and elsewhere, the world we inhabit would be a much less pleasant place.

Virtually every second of every day you rely on minerals that are obtained only two ways — through some form of mining or extraction and subsequent processing that relies on other minerals or through the recycling of materials initially manufactured from the former.

Metals, petroleum derivatives and carbon-based energy sources are all so embedded in our global manufacturing, construction, transportation, monetary, communications and systems of distribution for food, health care, education, art and entertainment that effecting positive environmental change is complicated.

Let’s consider entertainment. How about a DVD? Aluminum, gold, dyos, silver, nickel, polycarbonate petroleum derivatives and acrylic lacquer go into each disc, of which more than five million are discarded each year. Yet recycled, their components can be used again in auto parts, insulation, electronics, plastics, office equipment and even to make jewel cases for the next generation of discs.

Yet without mining, you could kiss your iPod goodbye. And forget your smartphone. No laptops, desktops, netbooks, tablets or the communications networks upon which they rely. Energy-efficient lighting, solar panels, wind turbines, hydro-electricity turbines, pipelines that bring clean drinking water to vast cities — in themselves more energy and resources efficient because of their density — and pipelines that carry away human waste for treatment and disposal, all rely on mining. 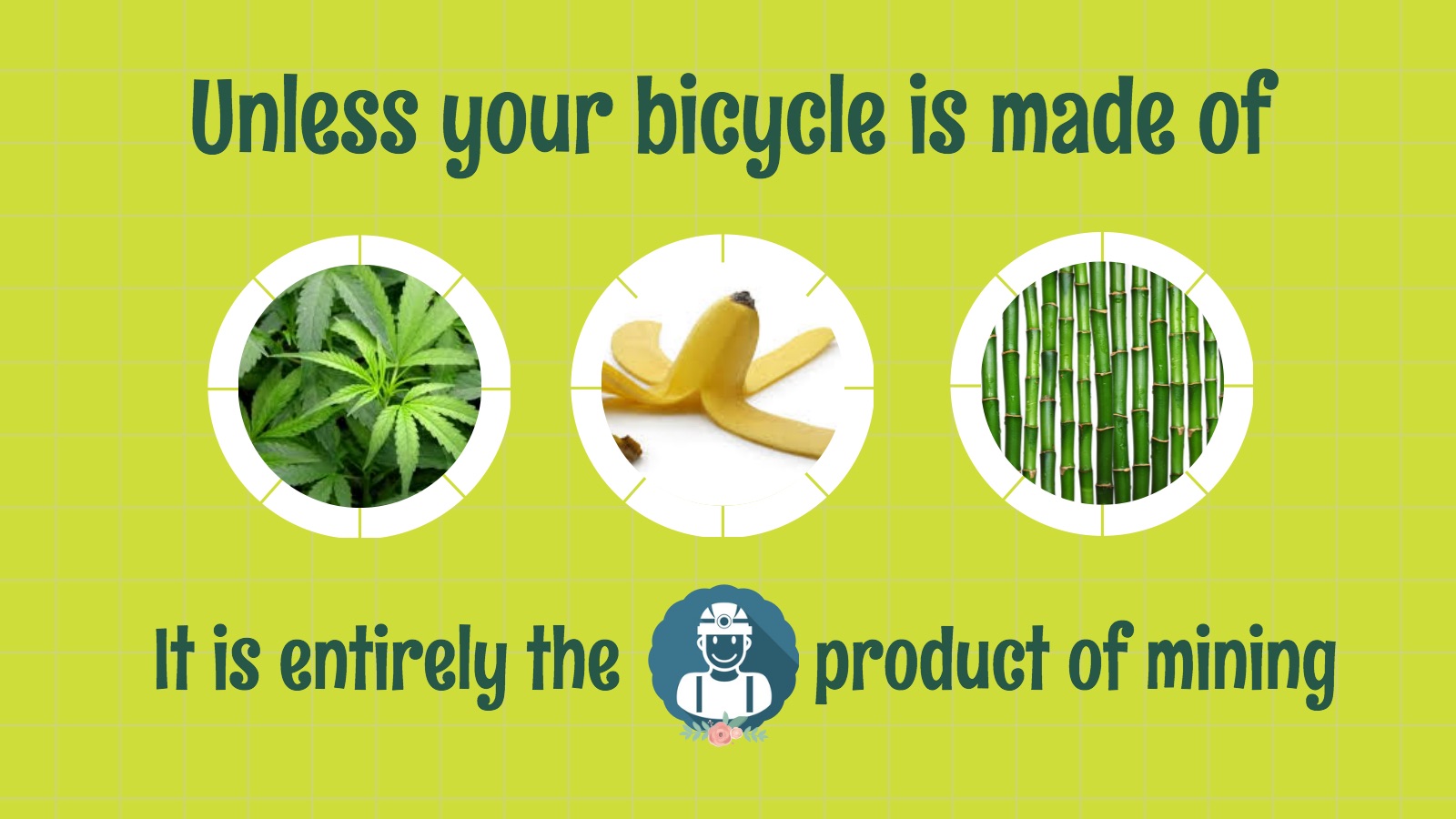 Without minerals and metals, air travel is no more. Maritime shipping is restricted to sailing ships which must navigate around Cape Horn — with all the perils that entails — as they did 150 years ago. Why Cape Horn? Because the Panama Canal requires mined materials to maintain its locks. Train travel is done, so to get from Vancouver to Toronto by land you are riding a horse (which means walking more than you ride) or travelling by birch bark canoe.

The implications of returning to a metals-free transportation system are mind-boggling. Should the United States revert to horses for transportation and food production, for example, you’d need at least the same ratio of animals to humans that existed in 1900.

So the equine population must increase from the present nine million horses or so to more than 100 million.

If the average weight of a horse is about 500 kilograms and a working horse requires three per cent of its body weight in feed, horses would consume 1.5 million tonnes of feed a day, or about 550 million tonnes a year, all of which would have to be diverted from the human food supply.

And the human food supply would be simultaneously diminished because production capacity decreases precipitously with the absence of farm machinery and fertilizers. Mind you, you probably wouldn’t need the bike to commute to work anymore because most of us would be working the land to produce the food to feed ourselves and the horses.

Just 200 years ago, 90 percent of the North American workforce was employed in agriculture to feed a population of 7 million. Now it’s less than one percent of the workforce and it feeds almost 340 million.

A South Dakota wheat farmer in 1900 produced about 6.5 bushels of wheat an acre. Last year, the average winter wheat yield per acre there was 50 bushels. Those increases in yield are due to the mechanization of production, a direct impact of metals fabrication and petroleum-based energy and fertilizer inputs.

Today, Canada’s agri-food sector contributes more than $140 billion to the national GDP. Were it to return to the agrarian practices of a century ago, based on human and animal labour, the consequences for most of us would be unimaginably catastrophic.

Does this mean we should abandon striving for more efficient, benign and sensitive approaches to agriculture, consuming foods closer to the source of production, for example, or defending arable land from destruction or removal from the food production inventory?

It does mean that when we consider industries like mining, we should put aside both the romanticizing of mining enthusiasts and the cynicism of their critics and apply some sober second thought to just how much we rely on the minerals hewn from the earth and what we can reasonably do to mitigate the consequences of our own appetites.