Yes, Virginia, Trans Mountain does have a business case

Critics of the pipeline project are outdoing themselves to seed doubt and confusion. In spite of this, those who care about Canadian economic-environmental balance needn't worry: TMX will be productive, profitable and climate-friendly for many decades. Stewart Muir explains why. 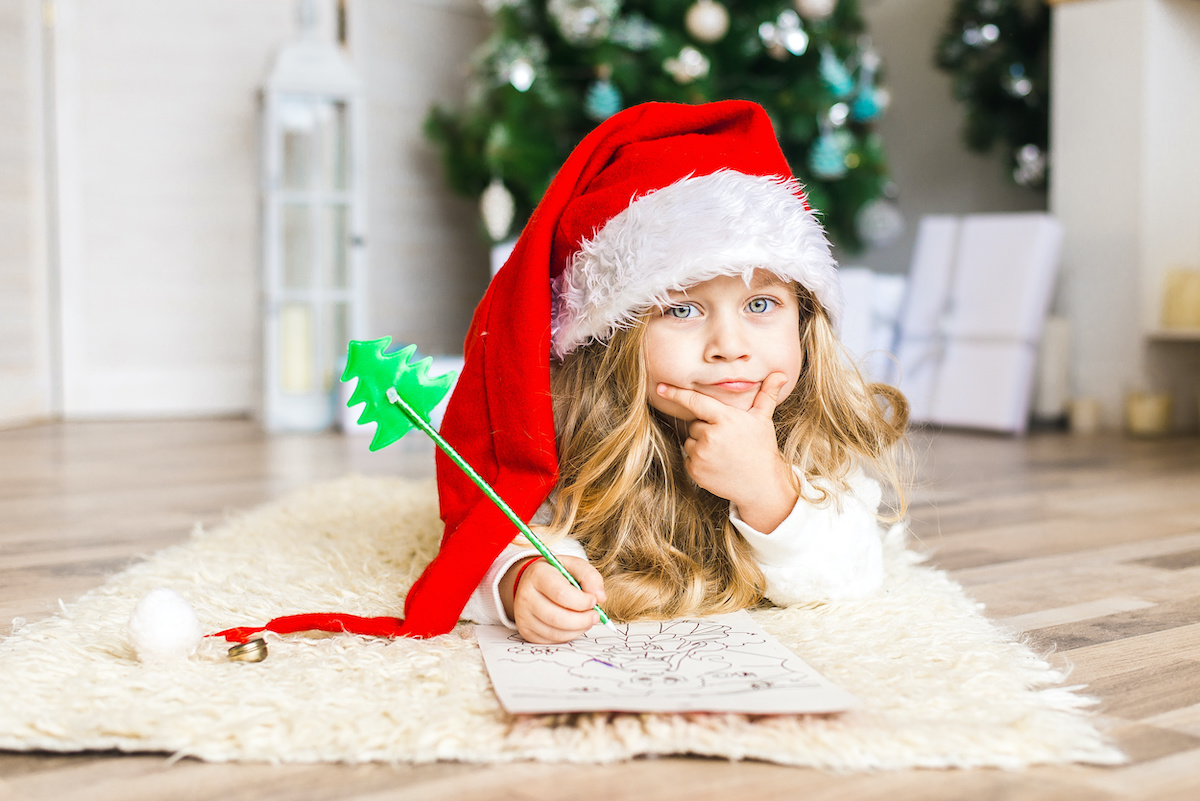 "Yes, Virginia, there is a Santa Claus" is a line from an editorial called "Is There a Santa Claus?" that appeared in a New York newspaper in 1897 and has become part of Christmas folklore – as well as a phrase frequently borrowed by headline writers for totally unrelated topics. Shucks, have we done it again? It appears so, but l'm going to make no apologies if it has taken you this far into the topic at hand...

The Trans Mountain Expansion Project, a serpentine steel tube linking Edmonton and Burnaby, was meant to have been finished a year ago. At this point it appears another 24 months of work is required to get the job done.

That there is a new round afoot of TMX skepticism should hardly come as a surprise. Pressure groups representing a tiny fraction of the Canadian voting public were able to leverage their marketing tactics into regulatory delays, political chaos and investment fright, resulting in a massive return on their investment of disruption dollars. Check out this chart from the Parliamentary Budget Officer (PBO) in a Dec. 8, 2020 report: 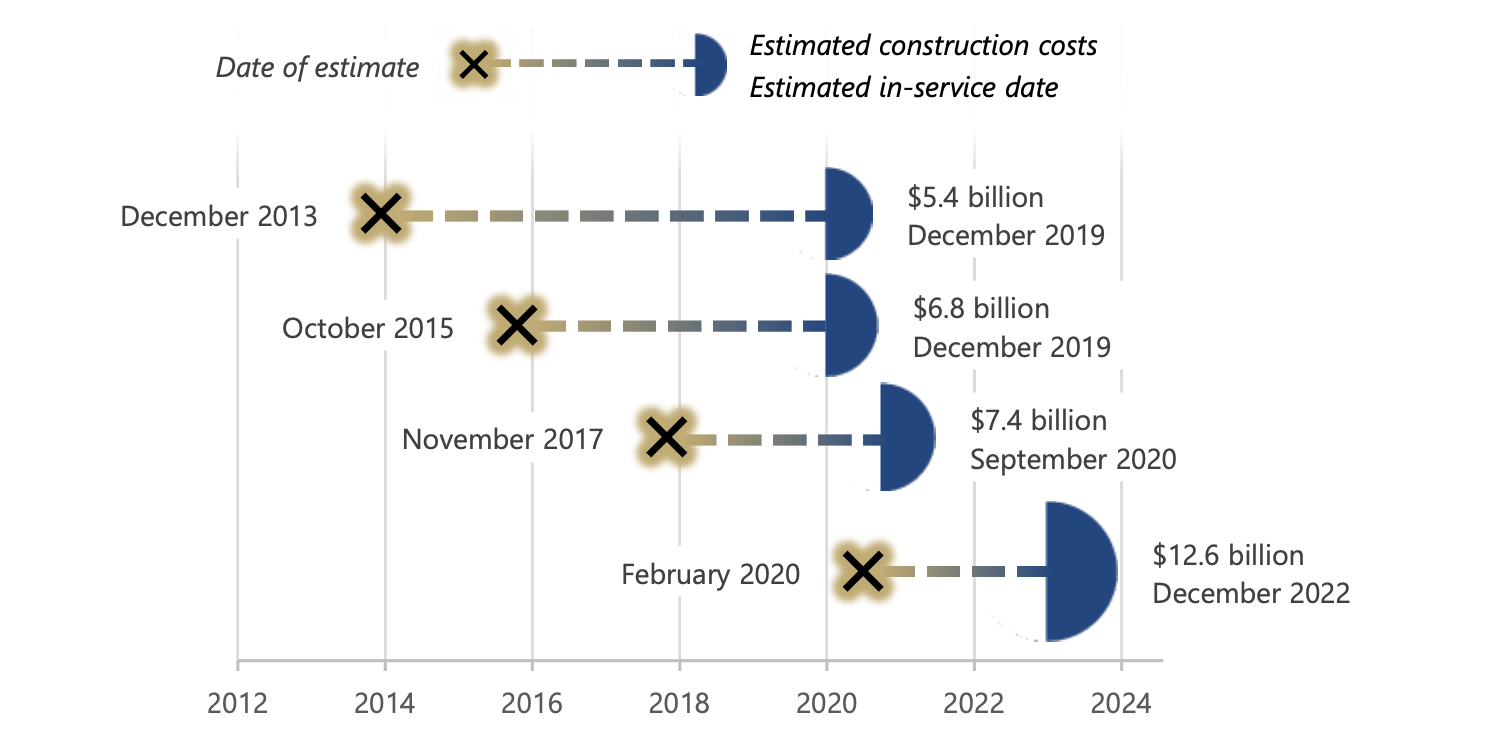 Look at the spiralling cost of the project over that time: it escalated from $5.4 billion to $12.6 billion, an increase of $7.2 billion. Not only was three years of earning ability flushed down the toilet by Canada's TMX dithering, the cost of building the project rose by a spectacular 133 per cent. Canadian taxpayers are left to pick up the tab for delays and escalations caused by years of project opposition – most of it based on emotional appeals not supported by facts – and also must as a nation give up billions in lost opportunity every year the project is not in operation. This is because, among its many attributes, once it is built TMX will serve to make Canadian oil for the first time a globally-priced commodity so we can finally stop giving it away at a cut rate to Americans.

I mean, Virginia, should it really be the purpose of Canadian energy to enable Americans to enjoy such cheap fuels that they need think nothing of hopping in their V8 Tundra (complete with a trailer hauling scooters because walking is suuuuuch a hassle) for lunch at the nearest Famous Dave's Bar-B-Que? 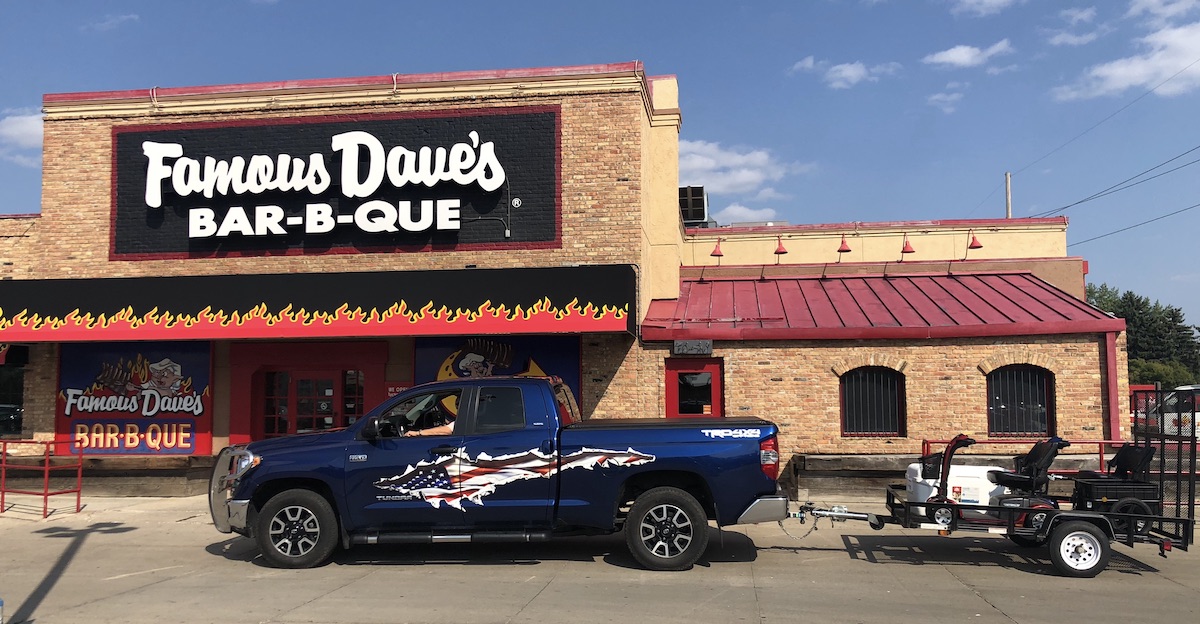 Of course not, but this is precisely the behaviour that Canadians are subsidizing through their slow progress in building infrastructure that truly is in the national interest. According to the PBO, every year without a completed TMX pipeline costs Canadians $6 billion in lost value because of the ongoing WTI-WCS discount. Thus the three-year delay so far has resulted in $18 billion dollars in lost value that can never be recovered. This brings the running total from our TMX dithering to $25 billion and that does not even include the value of wages, taxes, royalties, and related economic activity that would have been paid but were not, to say nothing of billions in lost investment caused by Canada's diminished reputation as an investment destination.

We can add to this a further $1.5 billion a year in direct profit from TMX being in operation. This is the figure released a few days ago by Crown-owned Trans Mountain in its market update. It states: "Today, net cash generated annually by the Trans Mountain Pipeline system is approximately $185 million per year. After expansion, that net cash will increase to at least $1.3 billion and up to $1.5 billion per year by 2023, up to an eight times increase in net cash generation." Over three years that is up to $4.5 billion in lost opportunity. Add this to the previous running total of $25 billion, and you can see that the delays have cost a minimum of $30 billion.

Some environmentalists will tell you that the delay is a good thing because it means less fossil fuels will be burned. Sorry to say, but it does not mean that at all. It means only that the world has less access to the world's most improving crude oil; and less access to one of its highest-performing commodities in terms of environment/social/governance (ESG) measurements.

In place of high-ESG oil from Canada, what do we get instead? Plenty of oil from other places. Russia is developing a $111 billion oil project in its far north that will create an entire new oil and gas province with 15 industry towns and a construction labour force of 400,000 workers that will eventually produce 100 million tonnes of oil per year.

Congratulations to those who whipped up public opposition to TMX, more often than not with made-up assertions rather than facts: you are helping to make Russia great again. Benefiting the environment? Not so much.

Paralleling the anti-TMX campaigns, there has been an energetic effort to persuade Canadians that the loss of a pipeline or three is of no consequence because we soon "won't need oil". In the real world where the laws of physics are unchanged, something quite different is happening.

A new report from Rystad Energy shows that the world is on track to run out of sufficient oil supplies to meet its needs through 2050, despite lower future demand due to the Covid-19 pandemic and the accelerating energy transition. At least $3 trillion worth of exploration and capital expenditure is required to meet the global cumulative demand over the next 30 years. As the smart money knows, renewables – wonderful, saintly renewables and I really do love them all – simply do not and cannot provide the energy required to fuel the world's needs.

We can't rule out giant leaps forward in energy technology be that battery storage, solar, wind, carbon capture, hydrogen utilization, zero-emission vehicles, ultra-efficient internal combustion engines, and other innovation that will reduce global emissions leading to net zero by 2050. But we can't "rule them in", either. Even the biggest promoters of net zero are unable to provide a coherent plan for how to get there. Solutions also need to be geographically tuned – there is little point in putting currently available solar panels that might be great in Arizona on the rainy west coast of Canada. Points to those who are trying to advance energy technology (including the Canadian government which released an ambitious roadmap on Dec. 11, 2020), yet it's difficult to predict the impact of behavioural changes that result in emissions reductions because so much of this depends on politics.

With Trans Mountain completion still two Christmases away, it's a sure bet that attempts to undermine confidence in the project will continue. The supposed Achilles heel of the project is that it exists to transport an emissions-producing commodity. A better path is to focus on how the crude oil being moved has been futureproofed through innovation. It has been suggested that growth in the output of the Canadian oil sands is a problem if this results in emissions growth beyond agreed future limits. That's true only if you're thinking about it the wrong way.

Look at how the PBO frames this, in particular the "Reference Scenario" and "Evolving Scenario" lines: 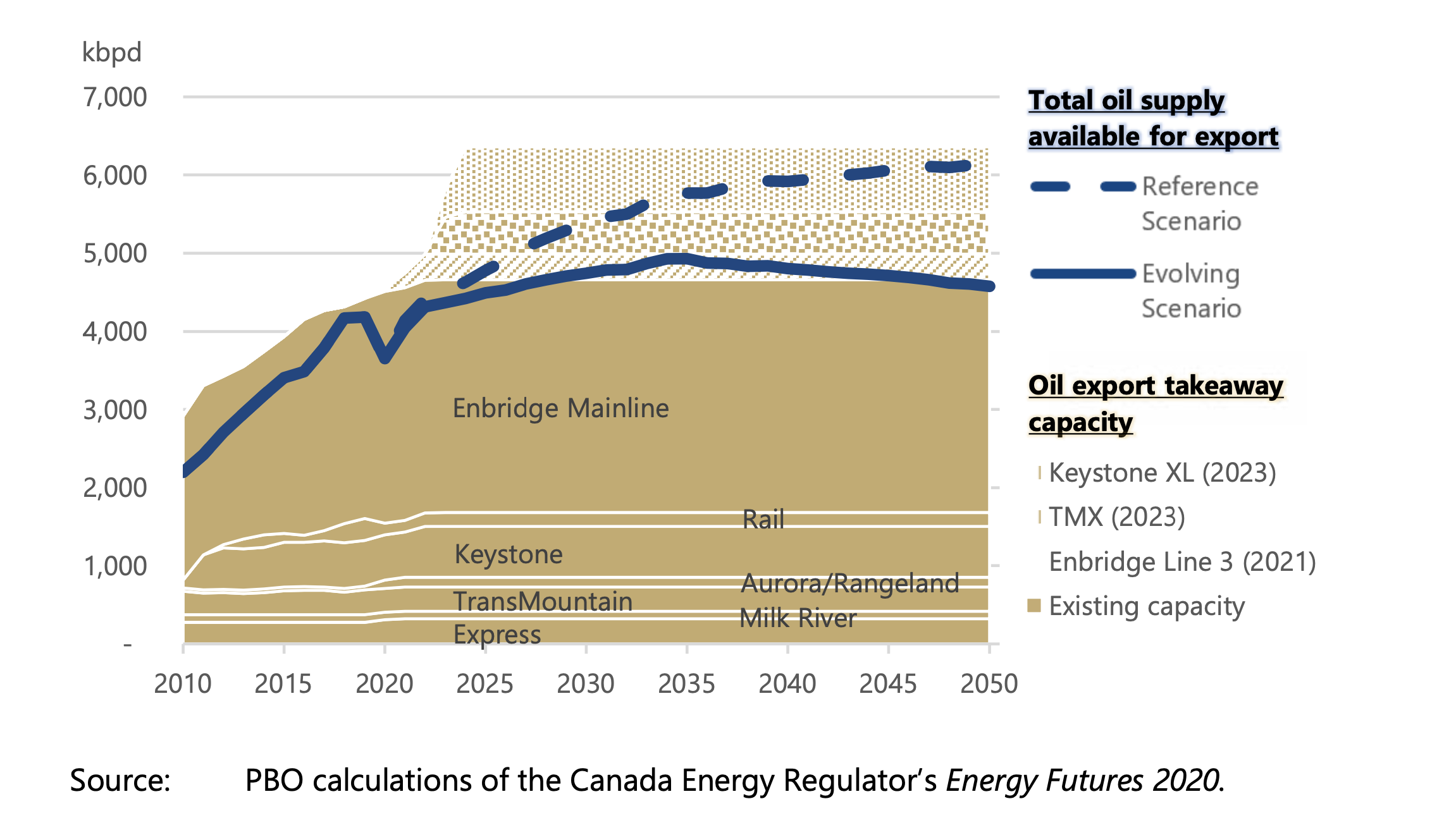 The dotted blue line refers to growth in oil sands output over the next three decades. It is clearly a growth line, especially up to the mid 2030s when it starts to flatten. This is the Reference Scenario, and it accurately reflects what is on track to occur based on known trends.

The unbroken blue line below it shows something else: a declining trend. This is the Evolving Scenario and it is meant to show what future climate commitments dictate what oil sands output ought to be.

Except it is completely wrong.

Specifying target levels of production on a barrel basis is not what climate regulations do. If they did, environmental groups would never have agreed to the 100 megatonne emissions cap for Alberta that remains in place and which the current emissions trend remains beneath. If they did, the new federal Clean Fuel Standard would simply tell people how much gasoline they are allowed to burn. The CFS does nothing of the sort: it deals with emissions intensity, a concept that seems to be lost on the Parliamentary Budget Officer.

So I've taken the chart and fixed the terminology so it creates a better understanding of where we need to head if environmental concerns are to be meaningfully addressed: 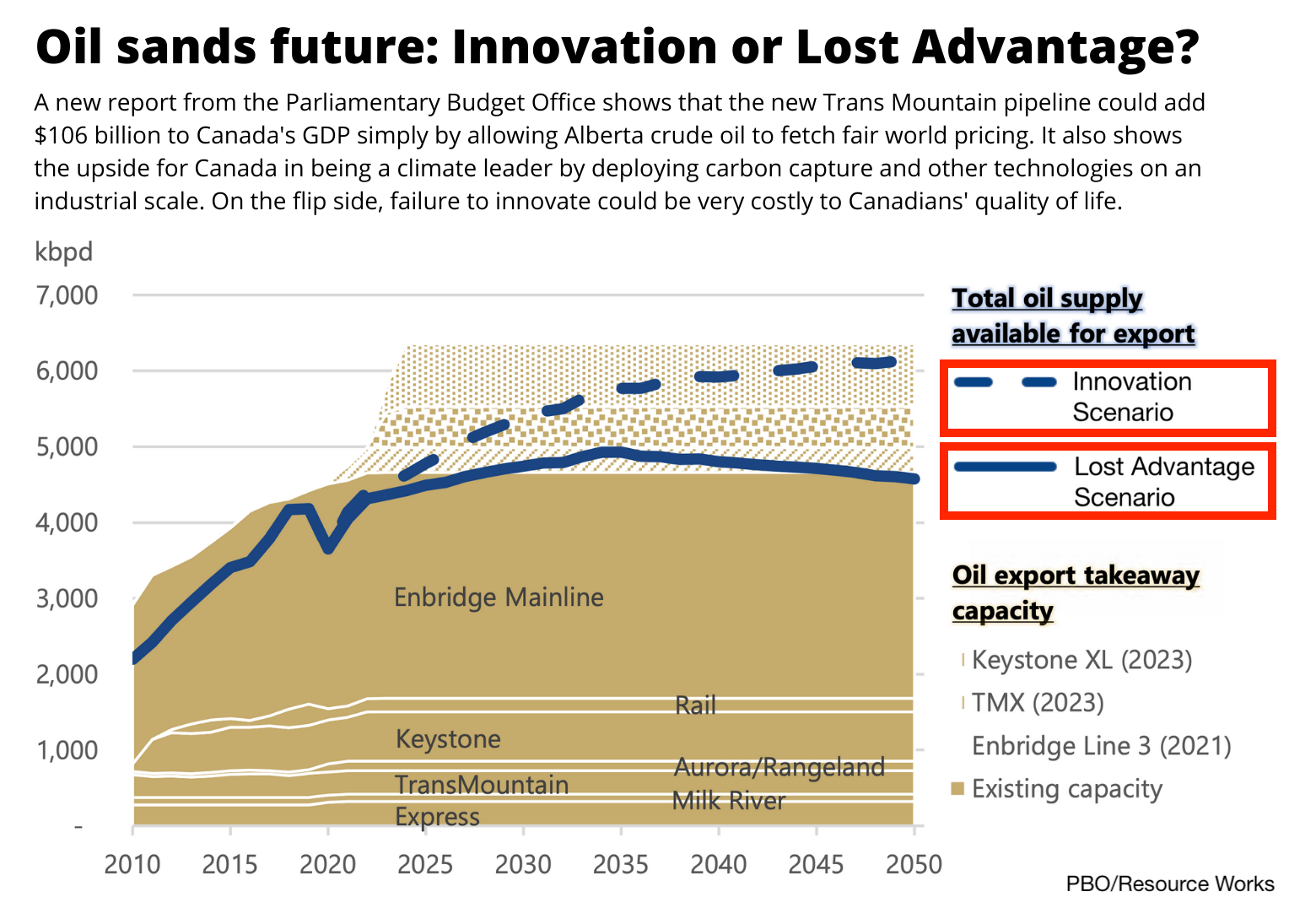 Opponents of the oil sands would characterize the Reference Scenario as the "Do Nothing" Scenario, but this is completely wronghead. I've relabeled the Reference Scenario as the Innovation Scenario. If Canadian industry is able to step up with technology and practices that let us extract the things we need from hydrocarbons while preventing the things we don't want from causing harm, then the Innovation Scenario will allow for ongoing growth of the Canadian economy.

The Lost Advantage Scenario (which the PBO labels the Evolving Scenario) is what could happen if we fail to make the investments in technologies like carbon capture that will result in economic-environmental balance long into the future. The Lost Advantage Scenario is also the one where Canadians will increasingly have to source the hydrocarbon products they will still require from jurisdictions like Russia that pay no heed to climate pricing, environmental protection, international boundaries, or civil rights.

Which of these futures should we choose? In my opinion, there can be no argument that the Innovation Scenario is the future of choice. This is why the Trans Mountains Expansion Project is so vitally important: it will be the conduit by which full economic value for Canadian crude oil will be realized that in turn finances the necessary green improvements to that product. Call it a virtuous circle: oil flows, revenues flow, innovation flows, climate benefits flow.

And that, Virginia, is why Trans Mountain does have a business case.