Time for a grown-up discussion about sovereign wealth funds

As Resource Works releases its latest report, Exploring the Potential of BC’s Prosperity Fund, let me personally invite you to take part in a dialogue on what the province can do to improve its economic security

Our report, written by our very talented assistant researcher Anja Novak and myself, is meant to be a handy backgrounder on what sovereign wealth funds are, what we can learn from other such funds from around the world, and what BC should do to build a good one.

Let’s start with a couple of basics.

We first heard about the BC Prosperity Fund from Premier Christy Clark in 2013, when she promised that the fund – built using LNG revenues – would be used for such things as paying off the debt, reducing taxes and paying for public services. There’s just one catch with that: you don’t need a sovereign wealth fund to do any of those things. So why would we want one? 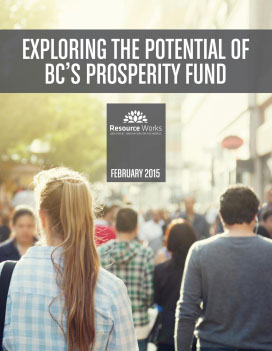 There are two main reasons why resource-dependent regions set up sovereign wealth funds: to stabilize government finances over time and to preserve resource wealth for the future. Essentially, by collecting, saving and reinvesting a portion of the government’s revenue from resources, it transforms a non-renewable natural resource into a renewable financial resource.

So the Prosperity Fund won’t create more wealth, but it’s a way to manage, preserve and extend a region’s resource wealth. It smoothes out the bumps in boom-and-bust resource cycles and creates government cash-flow that will keep going even if the natural resource used to build the fund expires. For these reasons, many thinkers consider sovereign wealth funds to be a responsible move for regions with non-renewable resources. And I agree.

The other big benefit of funds like these is that – when successful – they prevent sitting governments from spending every cent of their resource revenues. The same basic principle applies to your own personal finances. If you’re looking to save your money, it’s a good idea to stick some of your earnings into a savings account, and only draw on it when you really need to; if it all goes into chequing, you’re more likely to spend it all on short-term needs. (Note that this analogy only works if we assume our politicians will get carried away by short-term politics. But as far as assumptions go…)

So a sovereign wealth fund is not a magic machine for erasing our debt or lowering taxes or funding healthcare, although it can help with those things. It’s a tool designed to help governments manage their resource wealth: to make resource revenues more consistent and last longer. But a tool only works when it is well designed and well used.

So if we’re going to set up a sovereign wealth fund here in BC, it’s worth having a conversation about how to build the best one we can. Consider yourself invited!