A reality check for renewable energy

That headline isn’t really ours—it comes from an article by Scott Nyquist and James Manyika of McKinsey and Company—but many of the thoughts are ones we share.

We’re struck daily by the differences between two schools of thought on renewable sources of energy:

We hear critics preaching how Canada, the U.S. and other developed nations must “do much more” to get off fossil fuels. But those critics seem unable to tell us how many other countries can meet their power needs without fossil fuels.

Nyquist and Manyika’s article is well worth a read. You’ll find the full version here, but here are a couple of observations that hit home with us:

And then there is Canada’s Vaclav Smil, professor emeritus from the environment faculty at the University of Manitoba.

He’s an energy analyst and commentator who says: “I like renewables, but they move slowly. There’s an inherent inertia, a slowness in energy transitions. . . . We’re a society that demands electricity 24/7. This is very difficult with sun and wind."

His latest article makes a point that many fans of renewables ignore or under-play: "To Get Wind Power You Need Oil. Each wind turbine embodies a whole lot of petrochemicals and fossil-fuel energy.”

And he adds: “Wind turbines are the most visible symbols of the quest for renewable electricity generation. And yet, although they exploit the wind, which is as free and as green as energy can be, the machines themselves are pure embodiments of fossil fuels.”

To close, this graphic from Nyquist and Manyika: 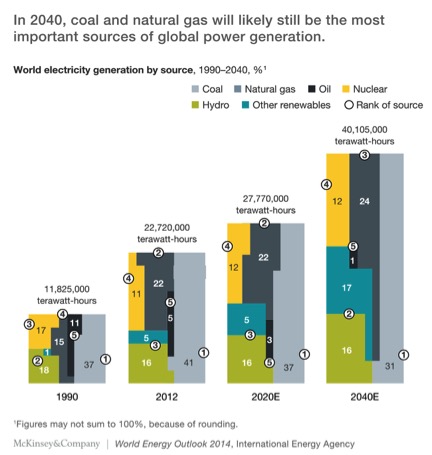