How a blatantly biased forestry panel steered toward a crucial outcome

The British Columbia government handed over control of a supposedly independent advisory panel to a lobbyist, Lisa Matthaus, who also provided government relations and strategy advisory services to more than a dozen organizations that routinely champion policies that ignore the public interest.

This is just one observation derived from a raft of documents released in Fall 2021 and January 2022 through the Freedom of Information (FOI) process.

Even before the panel was announced in late June 2021, the Terms of Reference draft shows changes that stacked the body's mandate in favour of narrow interests championed by activist Matthaus and other members of the panel who, like her, had extensive backgrounds with the Sierra Club BC. 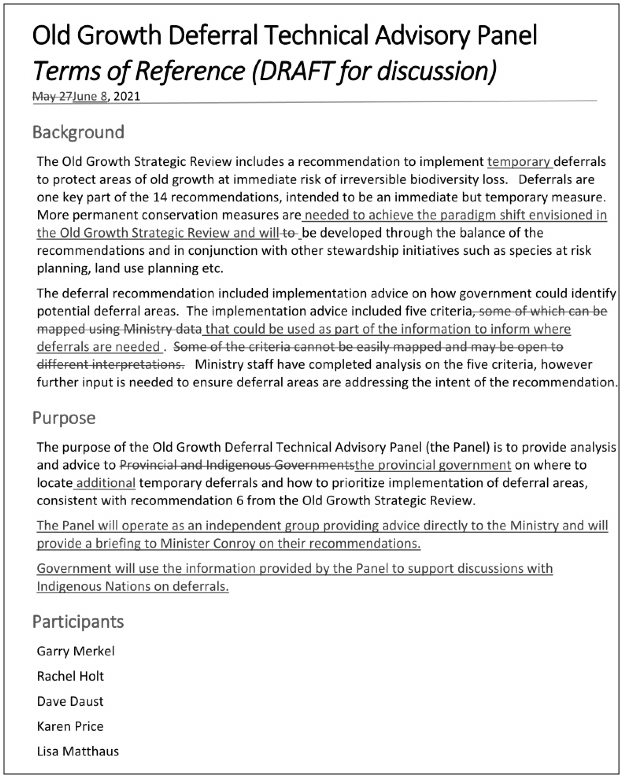 The page above is a discussion by environment ministry staff, clearly showing how the panel, even before it is composed, has begun to distance itself from the vast body of technical information held by the provincial government itself. Struck out is the reference to using Ministry data for mapping, opening the door to relying instead on an external, interest-group narrative that (by an extraordinary coincidence) had been pulled together by Sierra Club-affiliated members of the advisory panel.

Notable is the striking out of the following sentence acknowledging what forest experts in general acknowledge: "Some of the criteria [for deferrals] cannot be easily mapped and may be open to different interpretations." As later documents show, this set the stage for generally excluding from consideration impartial resources available from the civil service.

The note says that Lisa Matthaus is a scientist but in fact that is not an accurate description. Her actual role with lobbying group Organizing for Change involves "government relations and campaign strategy expertise on environmental priorities selected by member groups and develops [Organizing for Change]’s citizen engagement strategies.” From 1998-2008 she was with Sierra Club BC as a Campaigns Director, and she lists the role of president of foreign-funded West Coast Environmental Law, which opposes Canadian natural resource projects.

Matthaus is stated to have a Master’s in Environmental & Resource Economics, but has no scientific credentials.

Environment Minister George Heyman spotted the overstated description prior to the panel being announced in late June 2021:

First Nations governments, along with industry, labour, community groups and public interest advocacy voices like Resource Works, were completely excluded from the process while a clique of groups that uniformly oppose logging were given privileged inside access to the panel and its process: 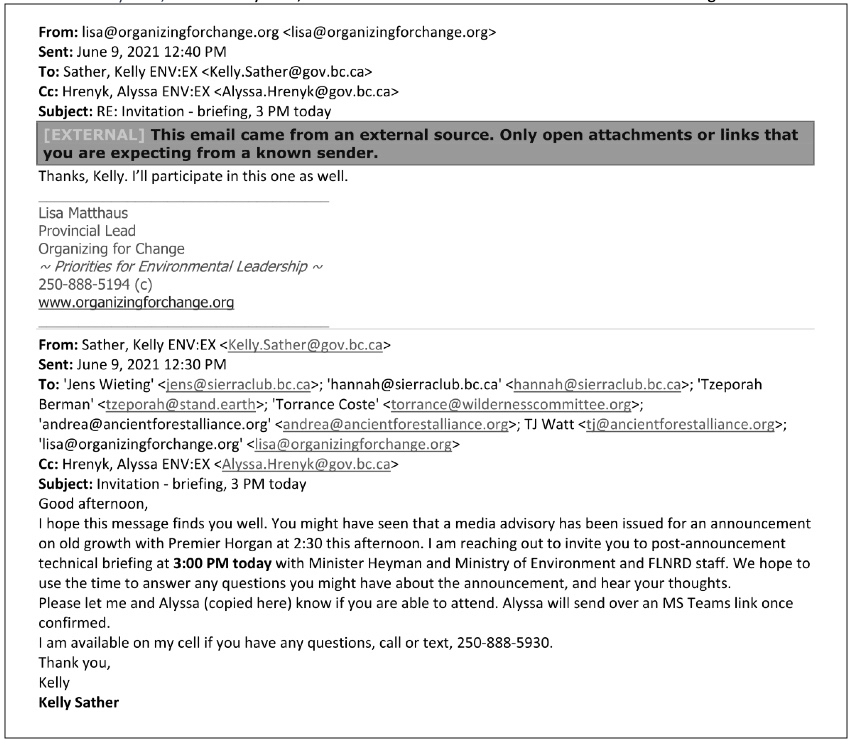 Two Sierra Club BC activists were given the inside track, which isn't so surprising given the tight linkages that four of the five OGTAP members had with the organization. Stand.Earth's Tzeporah Berman along with lobbyists from the Ancient Forest Alliance and the Wilderness Committee were on the list. Bizarrely, Lisa Matthaus was also invited to the briefing discussed above even though she had already by this time become the chief political fixer for panel as well as being one of its members.

It quickly became evident that Matthaus' true role on the public panel was not to contribute a scientific view at all, but rather to make sure the propaganda lined up. Below is a memo showing Matthaus, who was able to bill the Government of British Columbia up to $75,000 for her role on OGTAP, providing civil servants with instructions on what to do with an advocacy report on forestry that, among other things, touted foraging for floral greenery as an economically desirable alternative to logging: 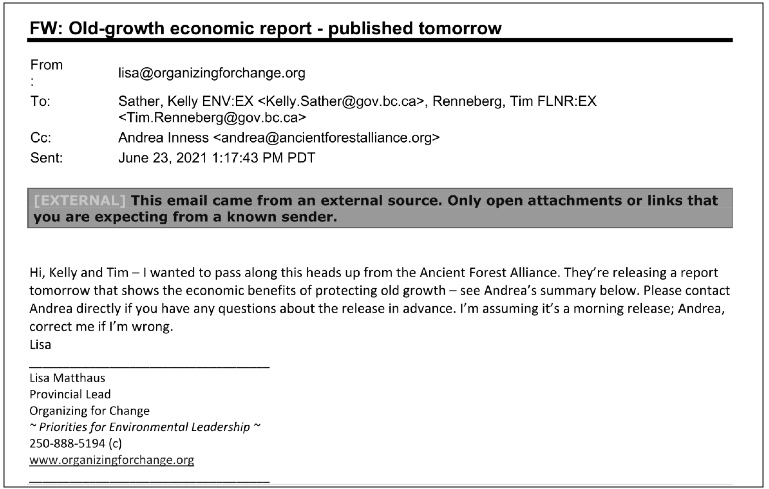 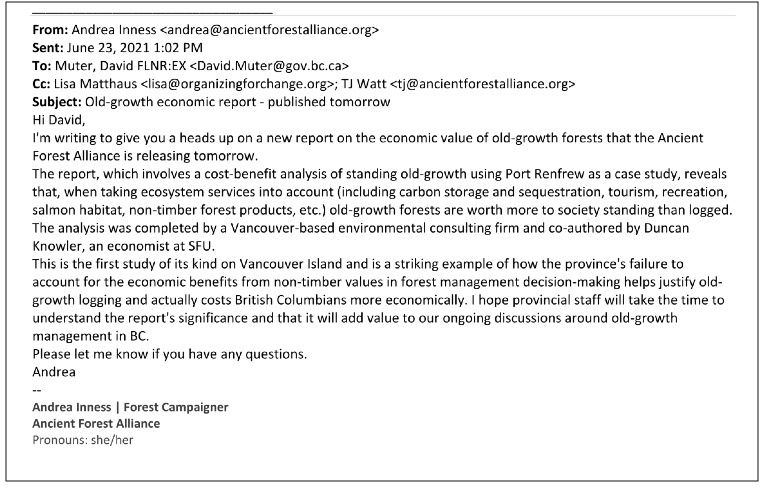 Matthaus acted as a de facto publicist within government for the Ancient Forest Alliance by steering a news release and images to key bureaucrats in the environment and forest ministries, complete with advice on how to spin the story: 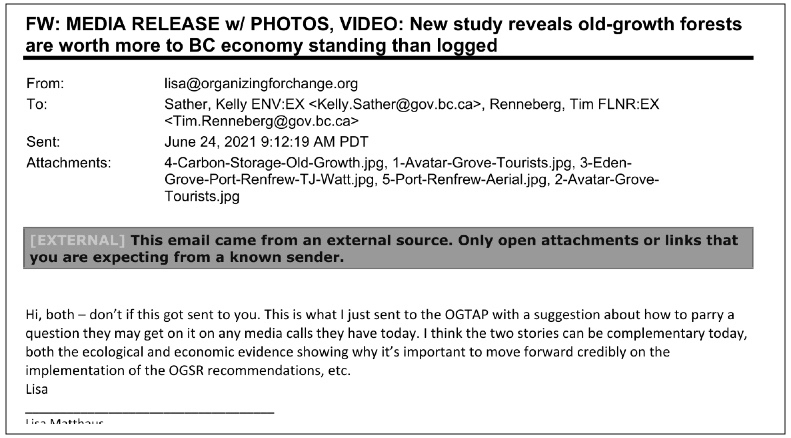 Matthaus' advice went so far as to recommend that her fellow OTGAP members and a senior bureaucrat pretend to act surprised if the media started asking questions: 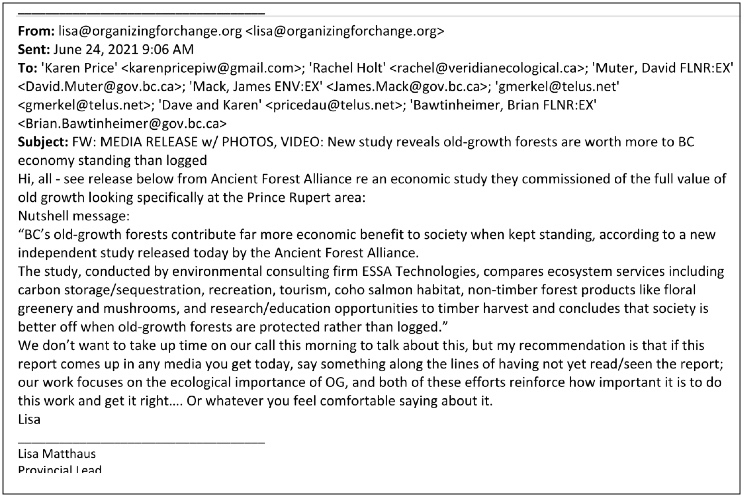 Although Matthaus appears to have had free rein in parts of the provincial bureaucracy, elsewhere in the government some civil servants were aware by the time the OGTAP panel was announced in late June that something unusual was going on.

Senior FLNROD research staffers exchanged emails on the composition of the Old Growth Deferral Technical Advisory Panel, revealing concerns that rather than have a mix of Ministry technical staff and outside independent researchers, OGTAP as announced was full of handpicked, politically oriented members. Forest ministry staffers expressed concerns with government messaging as it appeared in the news release announcing the body. They are particularly concerned that the suggestion that FLNRO lacked the expertise to do the work required and had no choice but to turn to the Sierra Club BC group who had been handed four of the five positions on OGTAP.

Wrote a research lead in the Resource Practices Branch: “My thinking is that, at a minimum, to be most effective, this Panel should have been comprised of ministry and external experts, in an equal and balanced collaboration that would most effectively deploy the depth of knowledge possessed by governments own staff.”

The lack of Ministry research staff also concerns the writer due to its "implication that we are internally bereft of this ability. My concern is that this undermines the scientists and the science produced within our Research Program."

The civil servant, Pam Dykstra, also voiced concern that a recent technical review "of data sources for old growth forest identification found that the methods proposed by some embers of the Advisory Panel did not represent the best available data/approach in at least one large area of the province, and yet these methods are indicated in the Panel’s Terms of Reference to be brought forth in the panel’s work.”

This is an excerpt from that email: 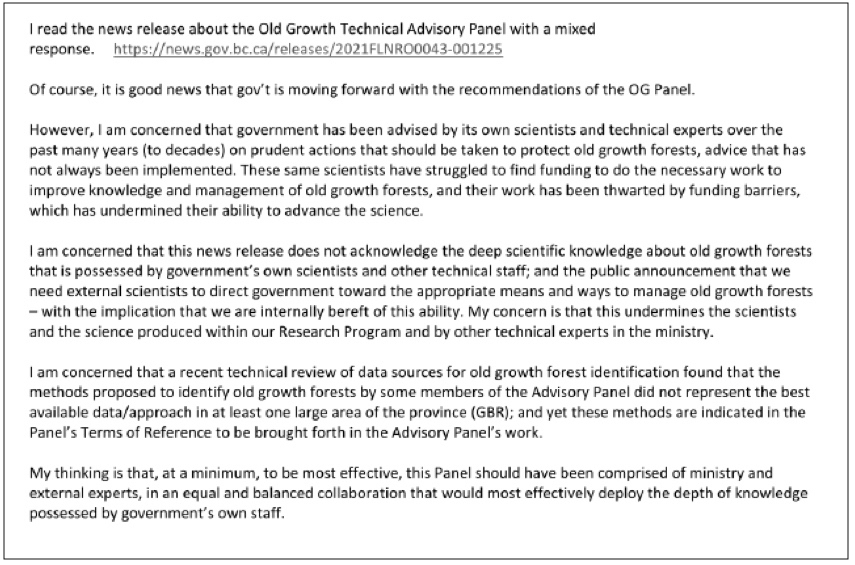 Over the coming days, as the OGTAP members commenced the work of the panel, bureaucrats in FLNRO continued to discuss concerns "that this calls into question the impartiality, neutrality, and professionalism and ability of the govt scientists and technical experts on this topic.” One email picked up on how the government's news release “does not say at all that there are govt members of this advisory panel…quite the opposite ‘The Panel will operate as an independent group’ work collaboratively with ministry technical staff’."

At the end of the day, it was vividly evident to the subject matter experts inside government there are "deep implications" of the government not supporting its own experts on scientific and technical matters, since the laxity of trust could become more widespread: "If the govt [old growth] experts can't be relied upon for impartial science why can any govt scientist or [subject matter expert]?”

The end result of the old-growth process is far from clear at this writing in February 2022. Whatever eventually results, the documents discussed here would appear to reveal that it will have been at the price of citizen interest and ongoing public trust in the bureaucracy and government, to the advantage of narrow interest groups.

One thing that comes up several times in correspondence is the question of Recommendation 5 of the "A New Future for Old Forests" strategic review. Here is that recommendation: 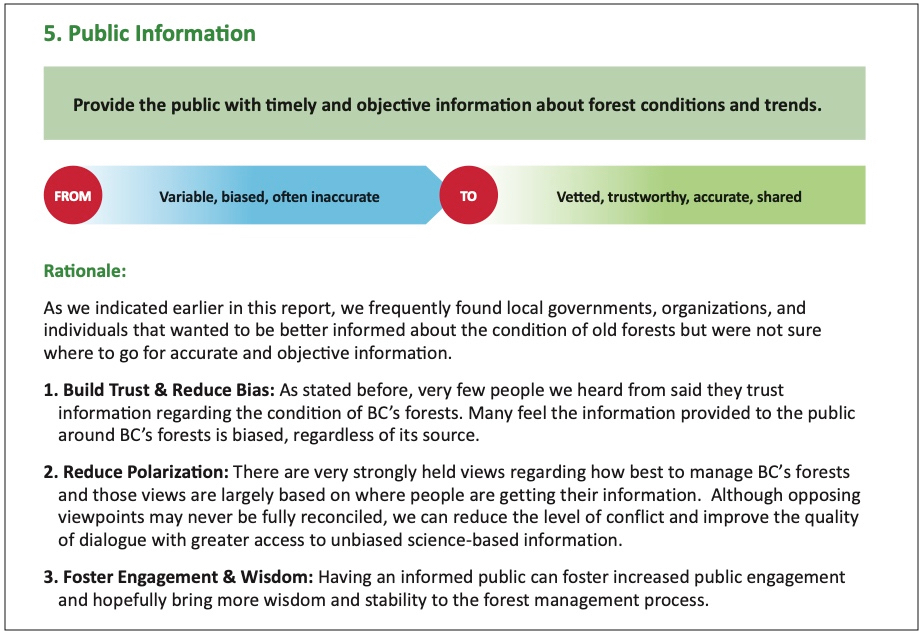 Notably, it flags the following rationales: build trust & reduce bias, reduce polarization, and foster engagement & wisdom. Yet what we now see from the FOI is that what actually happened is that almost all stakeholder groups, except the one that was aligned to illegal protest activities in Fairy Creek, were excluded from the OGTAP process. The process did not build trust; it increased and rewarded bias; it risks increasing polarization; and it most certainly did not foster engagement. The unfortunate message to all other groups (ie. forest communities, workers, First Nations) is that the only way to be heard by government is to engage in unlawful protest activity.

There must be a better way to advance the public interest.