An academic calling for class-action lawsuits against Canadian energy companies is ignoring the obvious fact that, ultimately, it's always the consumer who pays. That's you, writes Kim Lonsdale. 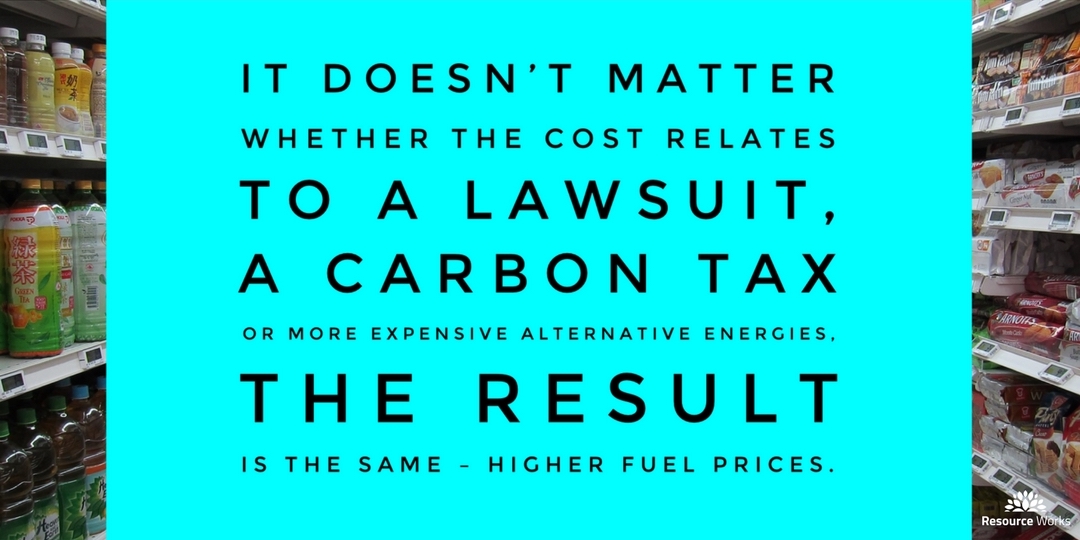 According to the Victoria Times Colonist newspaper, UBC international law professor Michael Byers suggested at a recent Victoria Forum event that Canadian courts should pursue fossil-fuel companies for the costs of climate-change damage in the same manner they went after big tobacco companies for health-care costs related to smoking. The purpose would be to “impose massive costs on the industry, eliminate a lot of their profits and level the playing field for alternative energy sources.”

A Times-Colonist editorial last August noted that Canada’s tobacco class-action lawsuits began in 1998, and are far from being over despite enormous legal costs on both sides.  The tobacco companies argue that smokers have known since the mid-1960’s that tobacco smoking was harmful to human health, and yet they chose to smoke anyway.

Coincidently, the North American public became aware that automotive exhaust was a major source of air pollution in the mid-1960’s and, despite increasingly dire warnings, we continue to drive trucks and SUVs as if climate change didn’t exist. Despite Professor Byers' enthusiasm to have lawyers “go after them and seize the day” it seems likely that a class action lawsuit involving Big Oil would play out along similar lines.

A review of tobacco company annual reports suggests that despite >20-years of class action lawsuits they continue to rake in billions of dollars in annual profits.  The fact is that companies do not pass costs on to their shareholders if they can pass them on to their customers.  For oil companies it doesn’t matter whether the costs being imposed relate to a lawsuit, a carbon tax or the use of more expensive alternative energies, the result is the same – higher fuel prices for consumers.

Ironically, one of the things Canadians are even more concerned about than climate change is higher fuel prices. The fact that half of Canadians who are approaching retirement have no retirement savings suggests that many people are unwilling to give up some comfort and convenience in the short-term in order to preserve a better future for themselves and their families. The same is true about climate change.

Politicians appear to view these outcomes as being desirable, but they lack the political will to implement policies that hold consumers directly responsible for their actions. Instead of simple policies that create shifts in consumer behaviour, our politicians have sought to implement convoluted policies that constrain Canada’s economy and redistribute wealth, but do little to change the fact that each year we consume an increasing amount of fossil fuel.

If our federal and provincial governments really want to reduce carbon emissions they could implement regulations that force people out of their gas guzzling trucks and SUVs – like raising fuel taxes or increasing vehicle licensing costs.

Our citizens also need an environmental attitude change. As Canadians, we are autonomous citizens who possess the power of free choice, and therefore we have both a moral and legal obligation to make lifestyle choices that are kinder to the environment. If citizens really want to reduce our carbon emissions they need to give their head a shake and stop buying trucks and SUVs and driving alone to work. At minimum they need to be supportive of higher fuel prices.

Lawsuits aside, the best way for Professor Byers to create positive change for the environment would be to convince the University of British Columbia that it’s a moral imperative to divest itself of the 9268 bitumen-clad parking spaces that facilitate 51,300 single-occupant vehicles travelling onto the UBC campus each weekday. This type of bold action would establish UBC as an institutional role model.

Kim Lonsdale is a business analyst and management consultant based on Vancouver Island.