Citizens’ samples turn out to be mould and spores, not coal dust, levels of which are well below air-quality guidelines, according to tests

A South Surrey resident who often watches coal trains roll by at White Rock and Crescent Beach has long been puzzled by complaints and campaigns about coal dust deposited by the trains.

He has seen no dust flying while the trains are moving. (Not surprising, as the loads are twice sprayed en route with a solution to keep the dust from flying.) He has examined the tracks. He has examined shop-fronts and sidewalk restaurant furniture in White Rock. And he has found nothing that looks to him like coal dust.

Now we have some more scientific evidence — evidence that led Delta Mayor Lois Jackson to say that fears about dust from coal trains amount to "hysteria" that is not supported by the facts.

Jackson told a Metro Vancouver board meeting on June 12: "There seems to be a lot of hysteria and a lot of innuendo about certain things about coal. There is not a big bogeyman beside the rail tracks." 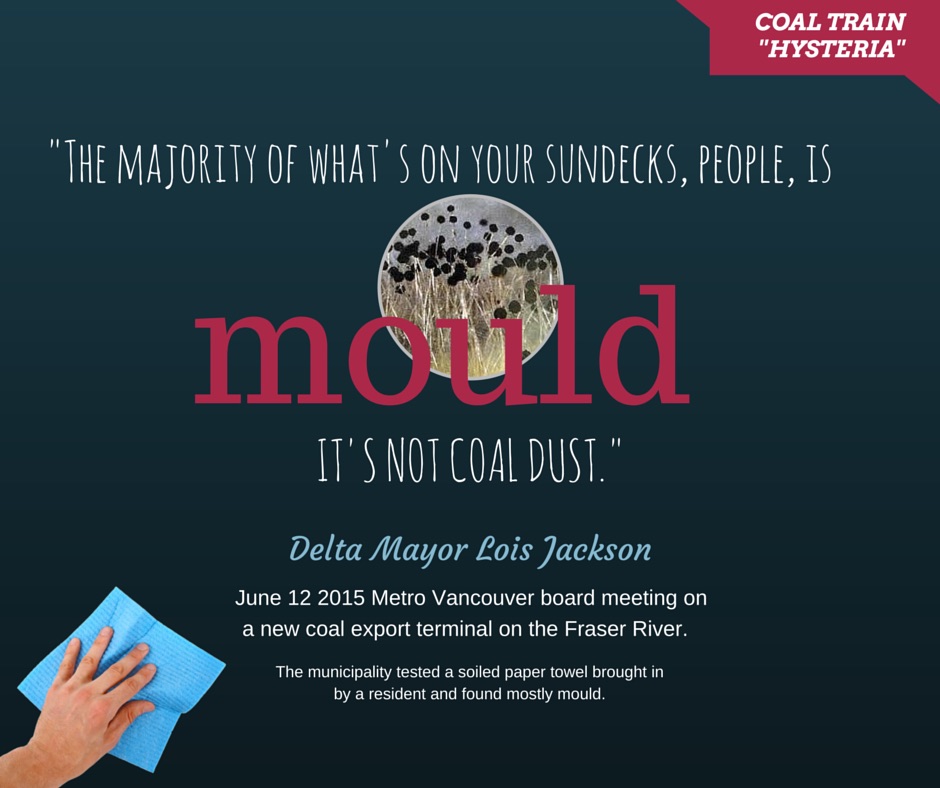 Delta has run tests along rail lines to the Westshore coal terminal at Deltaport, and these have shown over and over that coal dust is "very difficult to detect."

Jackson said one resident wiped down sundeck furniture that he was sure was covered in coal dust.

He brought in the dirty paper towel he had used. The city tested it — but the dirt was not coal dust.

Mayor Jackson: "The majority of what's on your sundecks, people, is mould, it's not coal dust. It was hardly able to be detected in this sample that they took."

He told The Peace Arch News: "We, too, have done analysis of people's cleaning materials and found that it is just spores and what-not. It is not coal dust, but they firmly believe it is coal dust.”

We do not say coal dust never comes off a coal car. But Delta’s testing has shown a decrease in dust over time at its test sites. "The results have been showing really minimal amounts.” And all areas tested were well below the B.C. Air Quality guidelines for dust.

We hear, too, the words of Mark Gordienko, president of the International Longshore and Warehouse Union:

“When I hear arguments about people at risk from coal trains, going by, it just drives me crazy.  . . . I have members who have worked in coal, up to their knees, for 30 years, with no illness coming from coal. I’ve talked to people in the mines. They say that we probably have more exposure on the docks than they do in the mines, and we have no issues with it.”

Gordienko, incidentally, is also a valued member of our Resource Works Advisory council and, as such, helps us keep on the straight and narrow. His comments on coal are in this video.

Companies moving and shipping coal must take firm precautions against dust and unwanted discharge. We expect this to continue for Deltaport/Roberts Bank and the coal trains serving it, and for coal at the proposed Fraser Surrey Docks terminal.