Carbon pricing in individual Canadian provinces—if not matched by equivalent carbon prices in other jurisdictions—can potentially create competitiveness pressures on individual economic sectors. Check out the Ecofiscal Commission's findings on this issue.

There is a lot of talk about carbon pricing and what impact this could have on a country like Canada that relies very heavily on its export industries in resource commodities. Recent testimony to the Senate Committee on Energy, the Environment and Natural Resources from McGill's Professor Christopher Ragan may give some insight into these issues. The following is from his testimony on March 30, 2017. (Full transcript) 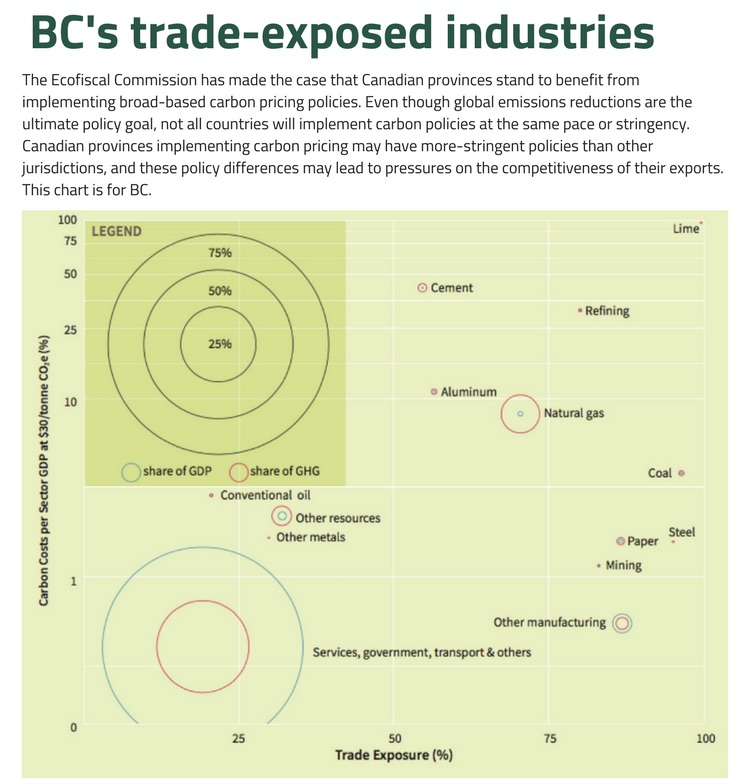 On the vertical axis, we are measuring the cost if you are paying a $30 per tonne carbon price on your emissions and that cost as a share of that sector’s GDP. That’s on the vertical axis. For people with a math background, it’s a logged scale. If you don't know what that is, don’t worry about it. (The chart above can be found on page 9 of this report - PDF download)

The horizontal axis is measuring the extent to which this sector is trade exposed. To what extent is it competing with firms from outside its jurisdiction?

The problem is the upper right. Take a look at the upper right and you will see what I like to call the usual suspects. You’ll see cement, fertilizer producing, refineries, steel. In Alberta, you also find the things that make Alberta unique. You see the oil sands, conventional oil and gas bitumen upgrading, but 18 per cent of the Alberta economy is in the upper right. These are the challenging sectors. These are the ones you have to think carefully about when designing a carbon pricing policy.

Effect of the Trump administration

There has been a lot of discussion since November 8 [2016] about how President Trump, and the U.S. in a Trump world, changes the argument for Canada to do carbon pricing.

I want to make the distinction here between the political rhetoric and the facts on the ground. The political rhetoric has changed. Today, for people who don’t like the idea of carbon pricing, the arrival of Donald Trump has put a lot of wind in their sails. It’s easy to say the United States isn’t going to go ahead with carbon pricing, Donald Trump is gutting the EPA, and therefore we should not do carbon pricing in this country. That’s a position that you have probably heard. I have certainly heard it a lot. That has changed and I think made more challenging the political discourse on carbon pricing. I fully admit that.

I’m not convinced that a country like Canada should have the same target as a country like France, for example. The problem is that the scientific consensus is that, globally, we need to reduce emissions by something like 80 per cent by something like 2050, and you can quibble about those numbers for sure. It does not follow, in my view, that, even if we agreed perfectly that the globe needs to reduce emissions by 80 per cent by 2050, that every jurisdiction in the globe should be reducing emissions by exactly that amount. That’s the kind of thinking that has led into those targets.

The final point I will make is that — and this is something I am worried about and perhaps you share this concern — you have to put more faith — I hate to use that term — you have to trust a carbon price to do what it can do and put in fewer of the non-pricing policies around the edges. One of my concerns is that Canadian governments across this country will put a carbon price in place. They then won’t trust it to do its thing. They will then put a whole bunch of other policies in place — subsidies for this, regulations for that — and those will be very costly. The carbon price will be far less costly. The other policies will be more costly.

Christopher Ragan is chair of the Ecofiscal Commission. The commission's complete report on trade-exposed industries can be downloaded here.