As the nation hits breaking point, it's a matter of confidence

Kinder Morgan's decision to suspend non-essential spending because of "unquantifiable risk" means Canada's global reputation as a safe and secure place to invest is at serious risk. Urgent steps are needed without further delay.

On a recent day, no fewer than 95 oil tankers and barges could be counted in Amsterdam's port, just a short bicycle ride away from the headquarters of Greenpeace International.

Now consider that this is the same organization has been quarterbacking a relentless misinformation campaign claiming inevitable catastrophe from just one oil tanker a day through Vancouver's harbour.

The hypocrisy could not be more flagrant. Here's a map from the Marine Traffic app showing those ships in Amsterdam - in some cases the exact same tanker ships that call on Vancouver:

It's an image to think about next time you hear someone repeating the Greenpeace talking point (echoed by many other activist organizations, and now blithely cited as "fact" in the news media) that one ship a day equals the certain annihilation of Vancouver's valuable tourism industry.

Let's put that assertion in context.

Amsterdam attracts 18 million visitors a year, compared to 10 million to Vancouver. It's self-evident that the odds of a catastrophic spill in Amersdam's tight waterways are exponentially greater than Vancouver's. Now consider that actual odds of a credible worst-case oil tanker spill in Vancouver are small. According to the most reputable estimate we have, that occurrence is once in 2,841 years.

Yet because of this gross distortion, it's no exaggeration to say that Canada's very viability as a nation is now at stake. Albertans are talking about separatism again, and how much the business-friendly United States would welcome a new trading partner with 180 billion barrels of oil. All because of unsupportable claims that are cleverly engineered to exploit the natural concerns that any thinking person who lives on the coast might have about their local environment.

The fact is, oil tankers safely cross oceans around the world on a vast scale. This map is a snapshot of actual ship locations and paths on April 11, of just one class of ship, the small Aframax tanker:

No supertanker, the Aframax is the only type of tanker ship that will be calling on Vancouver's Westridge terminal should the pipeline twinning be completed. It is a global workaday vessel that abounds on every coast and visits nearly every major port.

While Greenpeace cultivates the bizarre idea that challenging sailing conditions occur only in a tiny area of coastal British Columbia, it's obvious that these ships can and do go about their work safely in all seasons, on the high seas and through tight inland passageways, all around the world, every single day.

For Canada as a trading nation, marine activities have for decades produced extensive economic benefit. They have allowed the transportation of the nation’s goods and commodities to the global market. And they have enabled other activities such as the cruise industry, eco-tourism and the diverse array of commodity production that characterizes the western Canadian economy.

A mature and dynamic system of governance is in place for marine safety and spill prevention on the west coast of Canada with additional risk-control measures for oil tankers.  The national system adopts into Canadian law international rules and regulations that are meant to protect the marine environment.

The existing pipeline has been operating since 1953 without a drop of oil being spilled by a tanker visiting its terminal. The spill-prevention movement in the global oil shipping industry has yielded extraordinary results in recent decades. The total volume of cargo oil spilled has declined significantly while the total tonnes miles of cargo has increased.

Solving this crisis, and allowing the expansion project to be completed, must be made the top priority of the federal government. It's not just about upholding the rule of law and Canada's reputation as a place to invest. It's about jobs, successful businesses, and ultimately the ability to support healthy communities in an intact country called Canada.

Meanwhile, from Resource Works watch out soon for the publication of our Citizen’s Guide to Tanker Safety & Spill Response on  British Columbia’s South Coast. It will provide verified information on many of the questions being analysed at the moment. 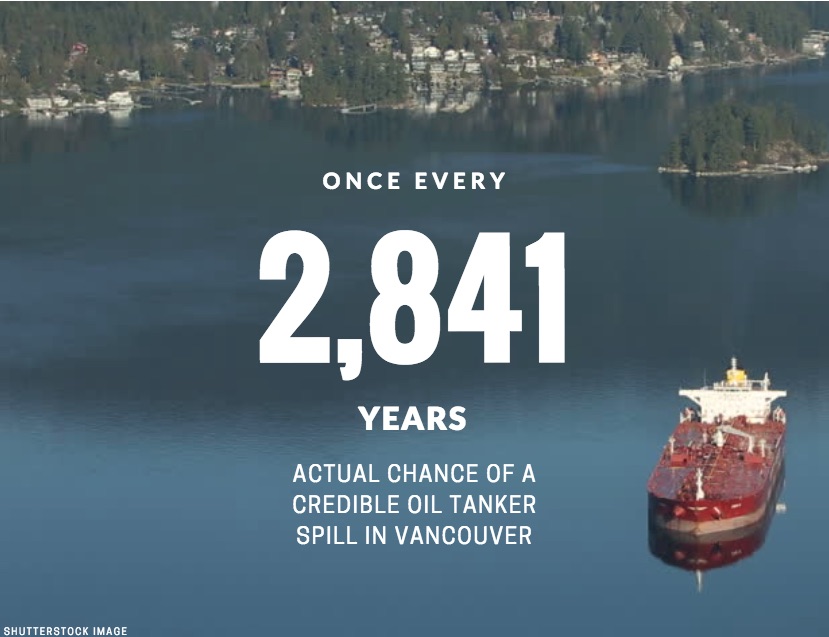