Here's the simple, non-partisan truth about crude oil: exporting it is how Canada pays the rent

Politics has absolutely nothing to do with the urgent necessity to build pipelines, like the Kinder Morgan expansion, to tidewater. 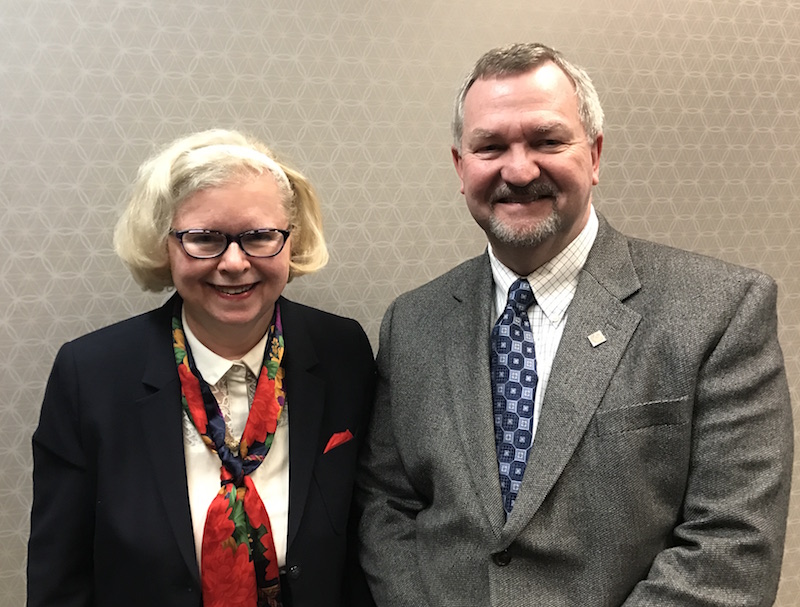 The Resource Works Advisory Council met last week and heard from economist Patricia Mohr, recently retired from Scotiabank and now based in Vancouver. She provided our group with an honest, broad-ranging perspective on the importance of a number of Canadian resource exports. (That's her pictured with Resource Works chairman John Turner.)

Copper will be in heavy demand in the manufacture of electric cars. Zinc is also poised for a lift and could go very high in her opinion, an outcome that would be beneficial to BC-based Teck Corp.

Patricia's main topic, however, was the role of crude oil in the Canadian economy. She did not mince her words: "Crude oil pays the rent in Canada, if I can be really blunt about it," she said. "This is not a partisan statement, this is an economist's view."

One of the most compelling proof points for this assertion was drawn out in her dissection of national trade data. For 2016, the export of crude oil created a trade surplus of $32.9 billion. At the same time, Canada was in trade deficit to the tune of $34.8 billion in the category of electronic equipment - that is to say, our iPhones and all other such equipment at the heart of modern life.

Although automotive exports are sometimes touted as a competitor or even "replacement" for crude exports, we learned that because Canadian auto manufacturing is heavily dependent on imported parts, the trade surplus that results from the category is much diminished. Crude oil still generates by far the largest trade surplus.

The other major point on crude oil exports is that having just one customer, the United States, for all of our crude means we have never been able to get fair market value for it.

With the US producing more of their own oil and starting to export it, they are also becoming a trade competitor of Canada's. Only by getting oil pipelines to tidewater can this problem be solved.

As a result of those two dominant characteristics – heavy trade surplus plus stranded assets – Patricia sounded a note of grave concern about Canada's continuing prosperity.

It was left to those present to come to their own conclusions about what this state of affairs signifies. One of the most obvious things that a reasonable person will realize is that opposition to oil pipelines such as the Trans Mountain Expansion project to the Pacific Ocean is equivalent to opposition to Canadian prosperity.

Yes, there are significant risks that come with building energy infrastructure and shipping crude oil safely, let's not kid ourselves.

But there also risks to deliberately shutting down our ability as a nation to "pay the rent", as Patricia put it.

One of these risks is that rural Canadians will increasingly become disenfranchised and poor. You have only to look to the south to see where this leads. Urban elites and more disconnected than ever before in history from what it means to supply the basic material needs for society. This analysis by Brian Lee Crowley spells out the scenario in much more detail. Leaving rural Canadians behind will create a national tragedy.

For those claiming that developing the Canadian oil sands is bad for the environment, the message is clear. It's time to celebrate the stringent rules in place for our pipeline project, especially since part of that story is that ardent environmentalists held policy makers' feet to the fire. As a result, we can rightly be proud of our responsible approach to developing Canada's world-class national resources. Supporting pipelines does not imply opposing the necessary transition to a lower-carbon economy, nor does it signify laxity toward environmental protection.

New Canadian oil pipelines to the coasts are a way to build Canada's strength as a nation. Canadians can, and must, safely ship Canadian crude oil to markets overseas. We need to resist making the Kinder Morgan pipeline a political issue when it is a prosperity issue. For those concerned about the nation's future, it's time to get busy showing where we stand when it comes to building essential national infrastructure. One small thing you can do today is share this article with colleagues, friends and family.

The bottom line on pipelines and hot commodities