No matter how you measure it, Canadian energy is headed upward

Production is up, consumption is up, and we are both importing and exporting more energy than before. Stewart Muir looks at the latest numbers.

Canadians continue to use more energy, and the vast majority of it is from traditional sources: crude oil, natural gas and coal.

While many politicians rail against the evils of fossil fuels, society's dependence on it only grows stronger. It's not just Canada, either. Today the average global citizen consumes 600 calories of energy each second, according to The Rational Optimist. That's as if we were scoffing more than one Big Mac a second, 60 times a minute, 60 minutes per hour, 24 hours a day. Staggering, isn't it? We consume energy in ways that are visible and obscured from view, in our electricity, our food, our gasoline, jet fuel, synthetic fertilizers and much more. Some 80 per cent of this primary energy is provided by fossil hydrocarbons. Even dramatic additions of non-emitting fuel sources will not alter this in the short term.

The following chart documents the sources of Canadian energy, and the uses made of it. (The base chart is from Statistics Canada, and we at Resource Works added the annotations.) 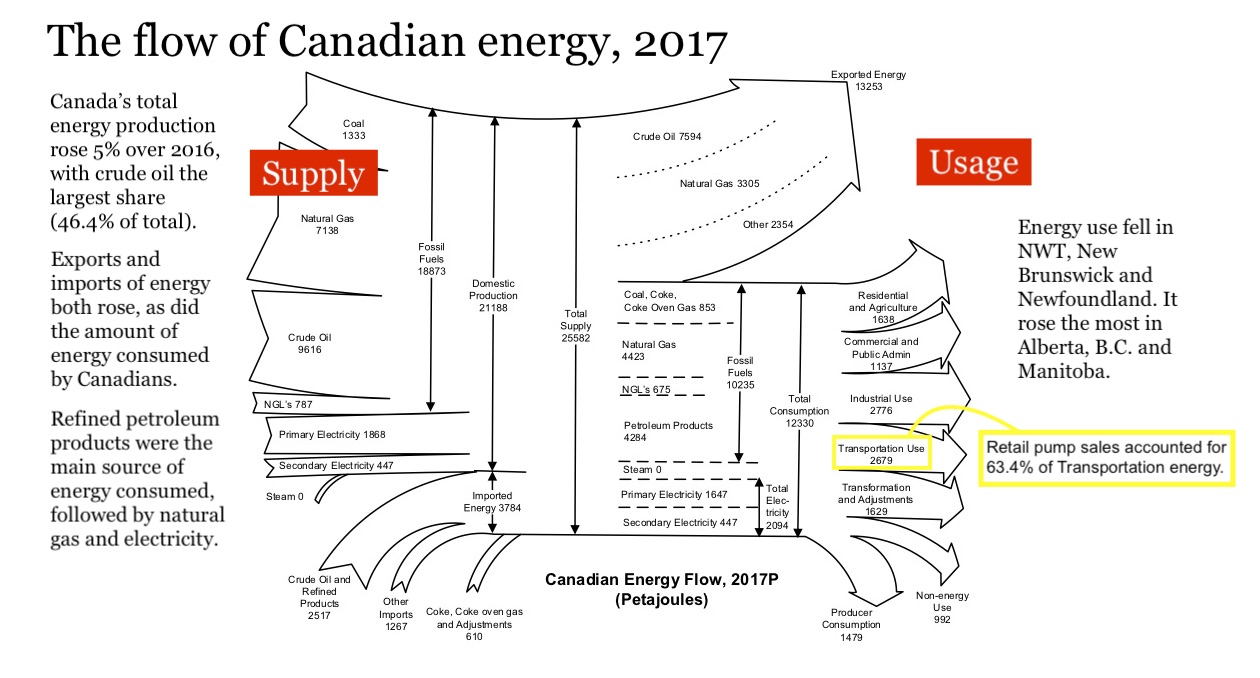 The original can be found in Statistics Canada's new report on energy issued in May 2019 (which we've also archived here). It reveals a number of things, the most prominent being the simple fact that our energy system is large, complex, and for better or worse is built on a fossil fuel platform.

The inescapable environmental consequences of consumption at this level are plain enough to see. That's where things start to get quite interesting, and very political. Not all those seeking political office are willing to acknowledge the facts of energy dependence. There is an almost irresistible temptation to offer "transition" from fossil fuels as a simple decision to make, that once implemented will solve the challenges of climate change. As an implacable, energy-hooked public looks on with indifference or skepticism, many politicians are reaching for alarmist tools, policies, and rhetoric – with cries of "emergency!" and "crisis!" issuing from sobbing children who have cut out of school to join a march. It would be infinitely easier to feel some attraction to this strategy, were it not for the fact that the solutions offered under the alarmist model are invariably unworkable ones dependent on unreliable and costly solutions.

Wind farms and solar panels are certainly a welcome part of the future energy landscape, but they lack the qualities of reliability, cost and energy density that characterize the bulk of current supply. To get serious about reducing climate impacts, the practical priorities are pretty obvious:

This isn't a debate about whether climate change exists or not. It's about whether we are serious about confronting it, knowing that energy use will continue to rise in future.

To be effective, we need to be informed, and able to stand up to the hollering of the solution-specific advocates who have become so adept at manipulating public discourse on energy as they clamour for subsidies for what are likely to be marginally effective offerings.

Energy people are resource people at heart. We have a responsibility to be resourceful in providing not just the facts to political decision makers, but also to ensure that concerned members of the public are stepping up to match unprecedented pressures being brought to bear on politicians.