MYTH BUSTER: How do we get the most out of our natural resources?

Doesn't it seem like common sense that the smartest thing to do to strengthen our economy is make finished products? Donald Trump might have made this idea work for him. But the Smiley Curve shows why a strong resource economy like British Columbia should be realistic about manufacturing. 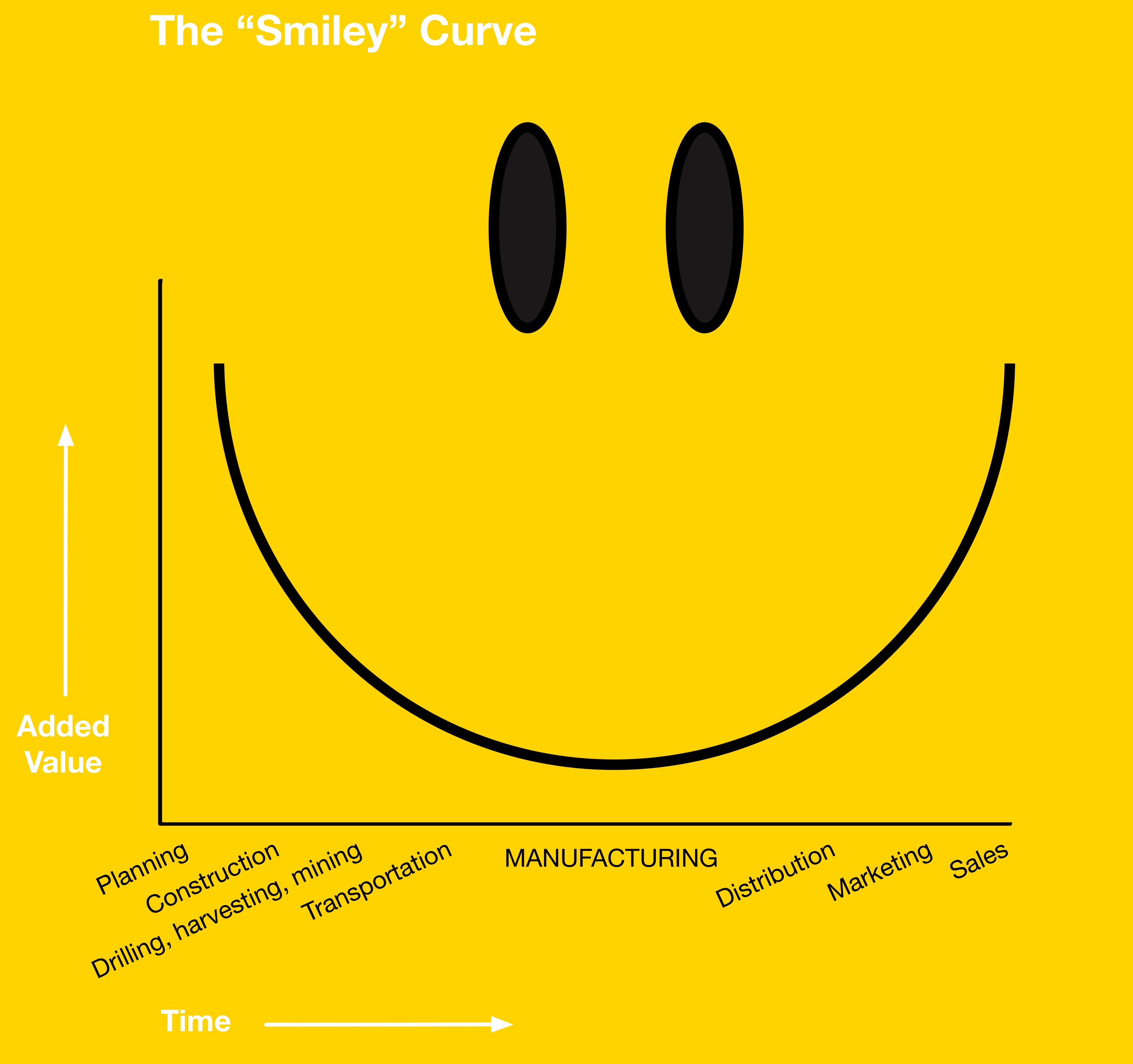 The following is drawn from The Seven Myths of BC's Resource Economy, a 2014 publication for Resource Works by former Statistics Canada chief economic analyst Philip Cross. This discussion has meaning for the oil and gas, as well as the forestry, sectors.

As documented in the companion study, a 10 percent increase in the value of output in BC’s resource sector boosts GDP in Canada by $4.5 billion. BC reaps most of the benefit, as its total incomes increase by $3.7 billion or 1.9 percent of its GDP.

The largest job gains are in the primary industries, notably forestry and mining. This plays to Canada’s comparative advantage. While manufacturing and processing jobs could be done offshore or are vulnerable to increased competition from imports, the actual extraction of resources must be done in Canada. China cannot produce and export minerals or natural gas in place of BC. China needs all the (considerable) resources it produces to feed its voracious domestic market, and still must import resources.

The largest downstream benefit from increasing the development of natural resources lies in the services required, not in manufacturing. Services jobs increase more than twice as much as manufacturing in response to growth in the resource sector, although certain manufacturing industries like wood, paper and primary metals expand during a resource boom.

The modern global economy offers no long-term guarantees for the success of any industry. But resource extraction and the services required to produce these resources have proven to be a secure and stable source of growth. In contrast, the past decade showed the vulnerability of manufacturing, such as in Ontario’s auto and ICT industries or Canada’s textile and clothing industries.

People often confuse moving up the stages of processing from resource extraction to manufacturing with moving up the value-added chain. In most instances, manufacturing represents less value-added as a percent of output, not more. This phenomenon is sometimes described as the “Smiling Curve” (a phrase coined by Stan Shih, the founder of Acer, and popularized as the “Smiley Curve” by James Fallows[1]), which plots the value-added by stage-of-processing and finds a U-shaped curve. It shows that, for most goods, the most value-added occurs in activities related to extraction, such as construction and the transport of oil and gas by pipeline. Value-added is also high for services, such as transportation or financial and business services required by the resource sector. Manufacturing lies in the middle of the production process, where value-added is lowest.

The oil and gas industry represents a good example of the Smiley Curve. Industries involved in the extraction and transportation of oil and gas or in services generate more value-added than refining. Transportation by pipeline is required before oil refining takes place, which explains why this service is portrayed before manufacturing (see Figure 2), while all other services occur after refining.

While refining has high gross output, most of this value comes from the crude oil it uses as an input, not the value that refining adds. The industry is still critically important; without it, we would not have fuel for our vehicles, plastics for our homes or chemicals for our medicines. This metric shows that the value generated by refining is low compared with that of extracting or transporting crude oil. This answers why we export more crude than refined oil: crude is where the most value lies. The lower value added in refining also means refineries cannot be too far from their markets, as there is little margin within which to absorb transportation costs.[2]

The Smiley Curve of value-added in the supply chain has been observed in other products. For example, the value of producing a smart phone is greatest in the stages of production before manufacture, such as engineering and design, or after its manufacture, such as marketing, finance and the telecom contract made with the customer. Manufacturing the smart phone itself is a necessary if low value-added activity.


[1] Fallows used it to explain why manufacturing was outsourced to low-wage countries like China, while high-value added activities remained in the US. See James Fallows, “China Makes, the World Takes.” The Atlantic, July 1, 2007.

[2] The concepts and data behind the discussion of value-added in the oil industry are elaborated in Philip Cross’s “Extracting the Most Value from Canada’s Petroleum” commentary published by The Macdonald-Laurier Institute, September 2013.