4.7 million CPP pensioners have investments in resource and resource-supporting business to thank.

Of the top 40 publicly-traded equity holdings in the Canada Pension Plan, which is a federal retirement fund, 24 are heavily dependent on natural resources, according to an analysis by Resource Works.

The companies, shown here, include six banks that have significant exposure to forestry, mining, oil & gas, and supporting infrastructure.

The remaining 18 companies with asterisks are more directly exposed to the export-rich commodity economy.

Highest on the list are energy companies including Canadian Natural, Suncor, Fortis and Teck. Potash producer Nutrien makes the list, as does miner Barrick. Without infrastructure, we would not be able to get the resource products to market, so the resource bucket also includes the two main railways, CN and CP, pipeline companies Enbridge, TransCanada and Pembina, as well as diversified holding groups Brookfield Asset Management and Brookfield Infrastructure.

This top 40 also reflects that technical expertise to do resources right is also a major feature of the economy. Companies like SNC Lavalin ensure that the competencies are there to design and build resource infrastructure.

When companies like these are strong, we can also know that innovation in diversification and transition is also strengthened. Asset managers and resource developers can only invest in renewables when they have a strong balance sheet, and in Canada that means resources.

This list is a timely reminder that the Canada we know is one that includes tools that equalize diverse life circumstances. Without natural resources and the unique, special effects they have in the economy (which have been extensively documented here at Resource Works), it’s hard to imagine how Canada would be able to do this. Resources are good, solid, lifelong investments and that's why fund managers choose them. It's critically important that we continue to support them and ensure they are always able to thrive and improve, because without them Canada would be a lesser place, and our golden years would be less certain. 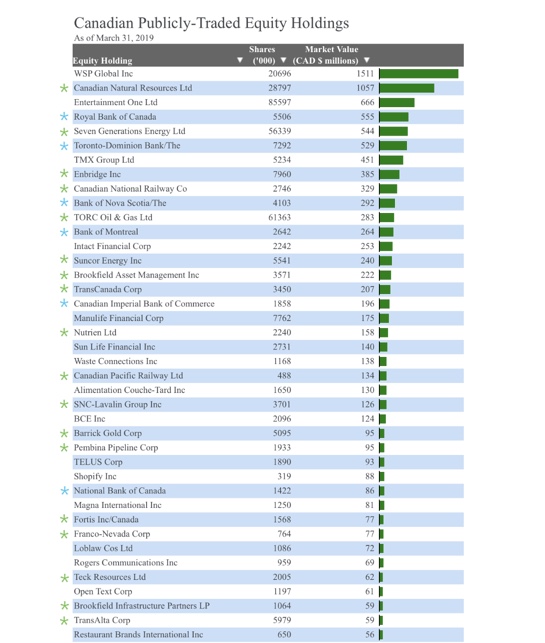