Hydrogen: grey, blue, and BC green

We have a social-media follower that we can count on to tell us, frequently, that the real “fuel of the future” is hydrogen. We can understand his thinking: What better than a zero-emission fuel that, when burned, leaves behind nothing but water? No greenhouse gases or noxious particles; no pollution, no problem. 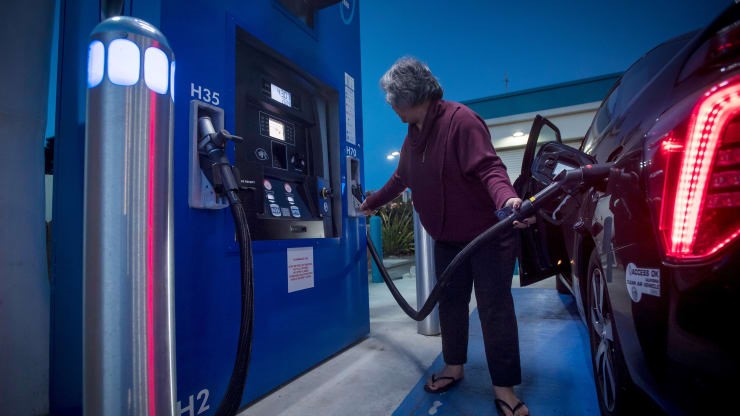 Hydrogen also burns hot, which would be attractive for companies making products such as cement and steel. These industries now use coal, with its own emissions.

There is, though, a catch: hydrogen has first to be produced, and that takes energy. Hydrogen can be made from natural gas, coal, or biomass, but that means also producing unwanted emissions. Hydrogen can also be made from water, using electricity to split water into oxygen and hydrogen. This electrolysis process is an environmentally attractive process but notably expensive.

Still, the International Energy Agency (IEA) says: “With declining costs for renewable electricity . . . there is growing interest in electrolytic hydrogen.” Down the road, BC could have an edge here, in having “clean” hydro-electricity available as the potential source of the energy needed to produce hydrogen from water. Indeed, a 2019 study sponsored by the BC Ministry of Energy, Mines and Petroleum Resources, FortisBC and the BC Bioenergy Network found that BC is well positioned to develop a $15-billion hydrogen industry for both domestic and export markets.

The ultimate goal would be to use BC’s abundant water and electricity to produce “green hydrogen” for export, mainly to Asia. The world’s big energy companies are looking seriously at hydrogen. Shell and BP and others have spent scores of millions of dollars on pilot projects.

Several countries are interested. Germany, for one, is investing C$13 billion in the fledgling industry, and is subsidizing its first hydrogen-powered trains, Australia has invested more than C$130 million, and already has the world’s first hydrogen export terminal, sending hydrogen (derived from coal) to Japan, which itself is pushing hydrogen as a fuel.

The world now produces more than 110 million tonnes of hydrogen a year. About 55% is used for making ammonia, most of which goes into fertilizers. Another 25% is used in oil refineries (to process crude oil into gasoline and diesel, and for removing contaminants such as sulphur from such fuels) and about 10 % goes into methanol production. Bloomberg News reports: “About three quarters of that hydrogen is derived from the chemical conversion of natural gas — the primary component of which is methane, CH₄ — through a process that also produces carbon dioxide, CO₂.

“If that CO₂ is released into the atmosphere, the resulting fuel is known as ‘grey hydrogen.’ When the CO₂ is captured and buried underground, it’s known as ‘blue hydrogen,’ a cleaner alternative. The cleanest form, called ‘green hydrogen,’ is derived from water, H₂O, through a process that runs on renewable electricity.

“While all three types of hydrogen are equally clean-burning, green hydrogen has by far the least negative effects on the environment. It’s also the most expensive: the price today can run as high as US$7.50 per kilogram, compared to US$2.40 per kg for blue hydrogen.”

The IEA says: “Demand for hydrogen, which has grown more than threefold since 1975, continues to rise – almost entirely supplied from fossil fuels, with 6% of global natural gas and 2% of global coal going to hydrogen production.

“As a consequence, production of hydrogen is responsible for CO2 emissions of around 830 million tonnes of carbon dioxide per year, equivalent to the CO2 emissions of the United Kingdom and Indonesia combined.”

The IEA also notes: “Researchers have found that clean hydrogen still costs too much to enable it to be widely deployed. Prices may not come down sufficiently until the 2030s, according to some estimates.”

Meanwhile, hydrogen-powered cars, trucks, and buses are clearly here to stay. Fuel-cell electric vehicles (FCEVs) powered by hydrogen are more efficient than conventional internal combustion engine vehicles, and their tailpipes emit only water vapour and warm air. Unlike battery-powered EVs, FCEV cars can refuel in only 3-4 minutes and already have a driving range of close to 500km. Fuel cells are being designed to last the lifetime of the vehicle, and perform equally under most weather, temperature and altitude conditions.

Tesla CEO Elon Musk has said of hydrogen fuel-cell vehicles: ‘Success is simply not possible.’ But a 2017 survey of 1,000 global auto executives concluded that FCEV technology will ultimately outperform battery-powered electric vehicles. All the major automobile manufacturers have FCEVs on the market or in development.  While hydrogen as a vehicle fuel is — right now — more expensive than gasoline, manufacturers usually offer three years of free fuel when you buy or lease an FCEV car in the US. And some see the cost becoming competitive with gasoline in the next few years.

Resource Works carried on June 28 a story on the opening (in North Vancouver) of a hydrogen fuelling station for vehicles. It’s from BC-based HTEC Hydrogen Technology & Energy Corporation, which opened its first such station in Vancouver in 2018, another in Burnaby in 2019, and plans two more in BC. It may be a while before hydrogen catches on as an automotive fuel in Canada, but HTEC’s estimates for Canada are 200 stations by 2030, to support more than 100,000 vehicles.

In BC, HTEC is working with partners to have 1,000 vehicles within the next five years. Honda and Toyota are working together to expand hydrogen refuelling infrastructure in Quebec.

The world Hydrogen Council has a goal of 10,000 hydrogen stations and 10 million hydrogen-powered vehicles by 2030.

Medium and heavy-duty vehicles including buses are being tested or sold, and two pioneering, hydrogen-powered, heavy-duty freight trucks will hit the highway between Edmonton and Calgary next year. California is already showing a lead. The California Hydrogen Business Council reports 31 strategically located fuelling stations, and there are plans for 65 more. More than 8,000 hydrogen-powered vehicles from Toyota, Hyundai, Honda and Mercedes Benz are on the roads in California.

California’s 2030 goals are 1,000 stations and one million vehicles. And California introduces in 2024 a program under which, by 2045, every new truck sold must be a zero-emission vehicle.

There’s more to hydrogen, too, than powering vehicles and trains. There are tests of hydrogen-fuel cells as batteries for aircraft. (Such fuel-cells were designed and refined by NASA, which pioneered hydrogen gas as rocket fuel to deliver crew and cargo to space.)

Saskatchewan has just announced that Proton Technologies will extract hydrogen from existing oil reservoirs, while carbon dioxide will remain trapped in the ground. “This  . . . is the first commercial deployment of its kind in the world. It also has the potential to repurpose abandoned wells, fields and facilities.”