For those choosing action over talk when it comes to climate change, the allure of natural gas has never been stronger. 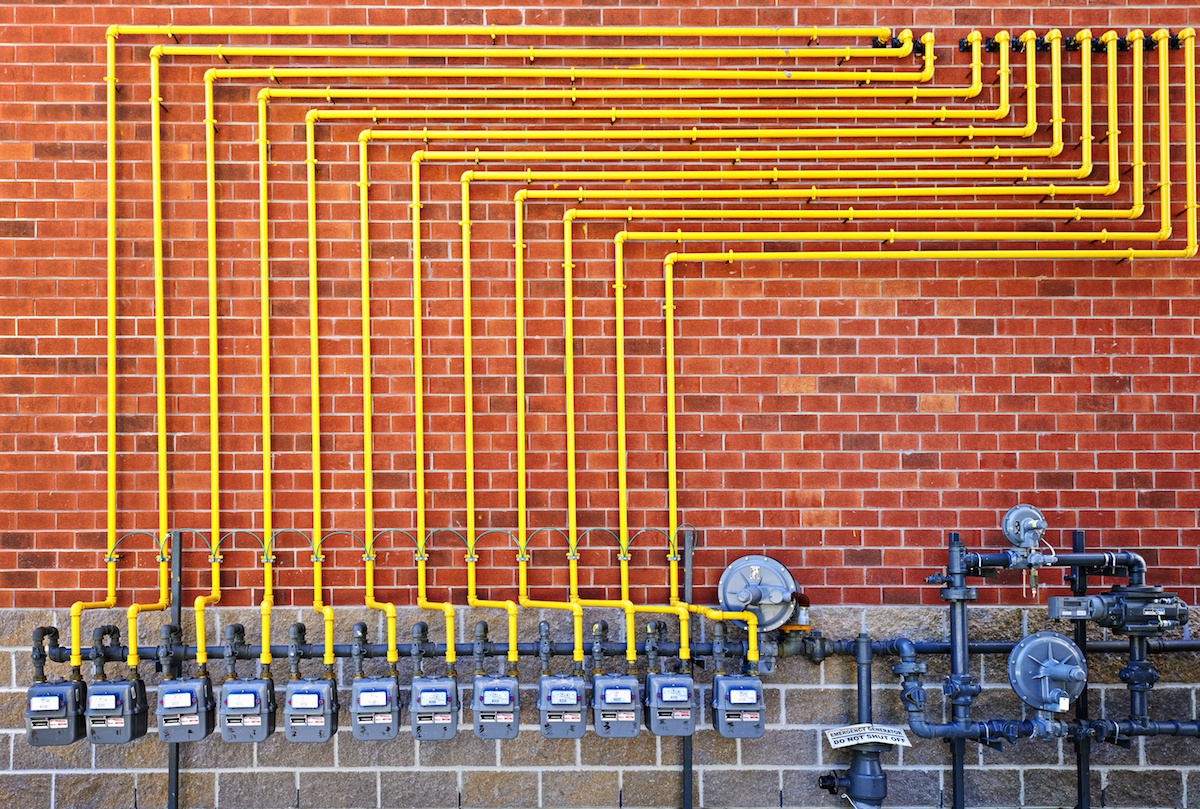 The challenge of supplying energy for society

Countries in Asia with growing energy demand are searching for dependable ways to aid their transition away from coal.

Clean-burning natural gas is increasingly the global choice for energy transition. But is it environmentally sound enough to match the demands for change coming from those who want to see rapid action on climate? That's a difficult question because there may simply be no physical way to satisfy the expectations of every critical perspective at the same time as supplying energy for society.

In Germany, the allure of cheap solar and wind is not playing out as costs soar for these types of renewables, yet it's Germany that is frequently held up as the model for other developed countries to follow.

However, despite significant progress on renewables such as solar and wind, the latest news from Germany will give pause to those who believed that the fourth largest economy in the world could easily shift to a carbon-free economy.

"The wind power boom is over,” reports Der Spiegel newsmagazine in an investigation that found trillions of euros would be needed to increase renewables' share of electricity generation. Coal is on the upswing and politicians are frustrated by an unwillingness by citizens to accept renewables infrastructure in the German countryside. Says critic Michael Shellenberger: "The reason renewables can’t power modern civilization is because they were never meant to." The magazine's recent cover evokes the frustrations with wind and failures to build transmission lines, resulting in the resurgence of coal. 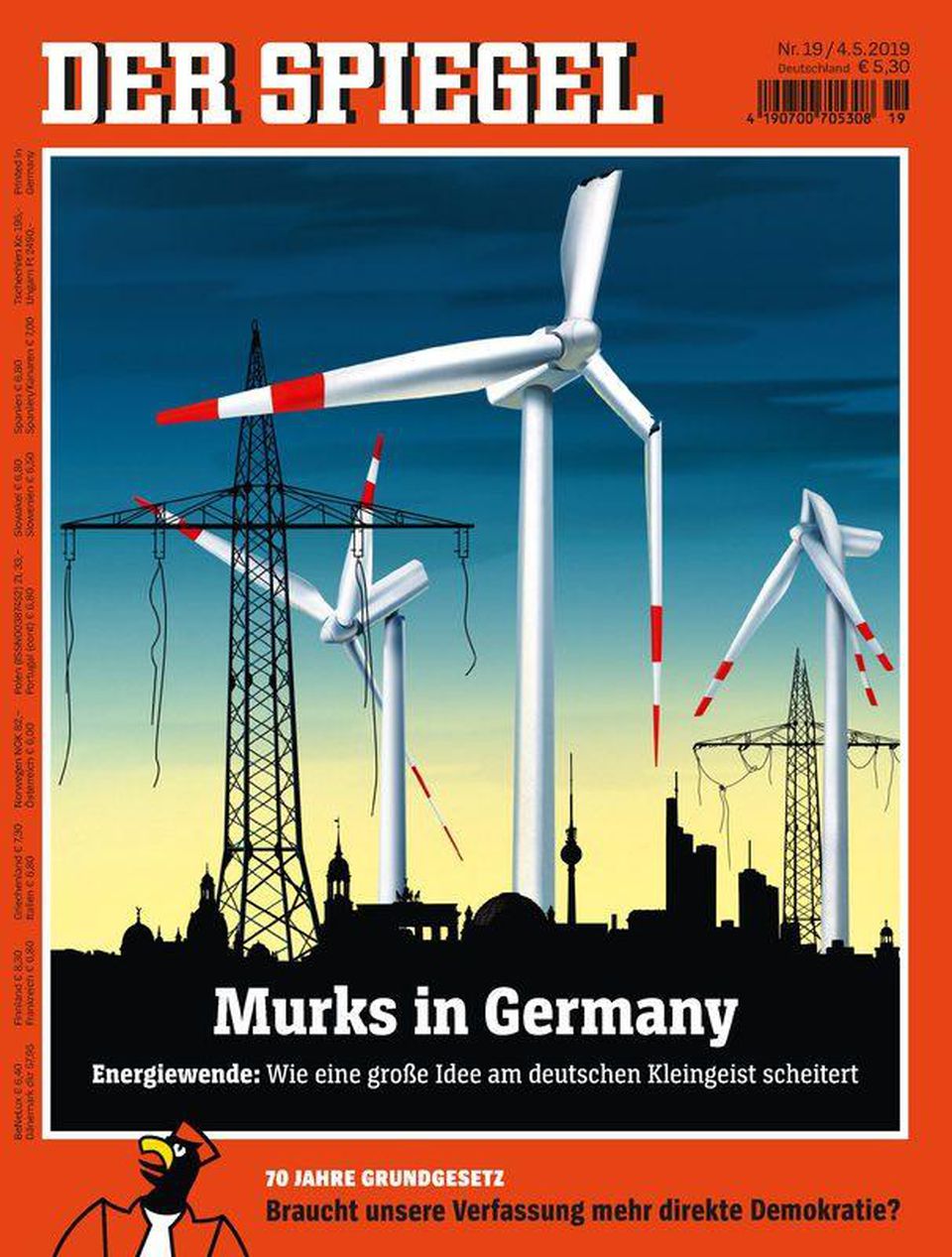 Natural gas and LNG, by way of contrast, are abundant, available, cheap, and far more environmentally sound than the alternatives. For Canada, the opportunities are clear. LNG Canada's $40 billion project approved for Kitimat in 2018 is now well underway while other export concepts for the west and east coasts are developing. This is well and good, but an emerging threat is that the United States is very quickly developing the capacity to capture export markets before Canada can. Even more worrisome is the fact that the U.S. is also turning Canada into a customer for American gas even though Canada has abundant stores of its own.

What's at stake for Canada are combined federal and provincial tax revenues of $46 billion between 2018 and 2028, according to a recent study by the Canadian Energy Research Institute. Over just one decade, the impact on GDP from natural gas investment and revenues is forecast to be $300 billion:

That breaks down to $8,100 per Canadian for a 10-year period. If those numbers don't make the picture sufficiently clear, consider the next table and accompanying chart looking at tax receipts, also drawn from the CERI report: 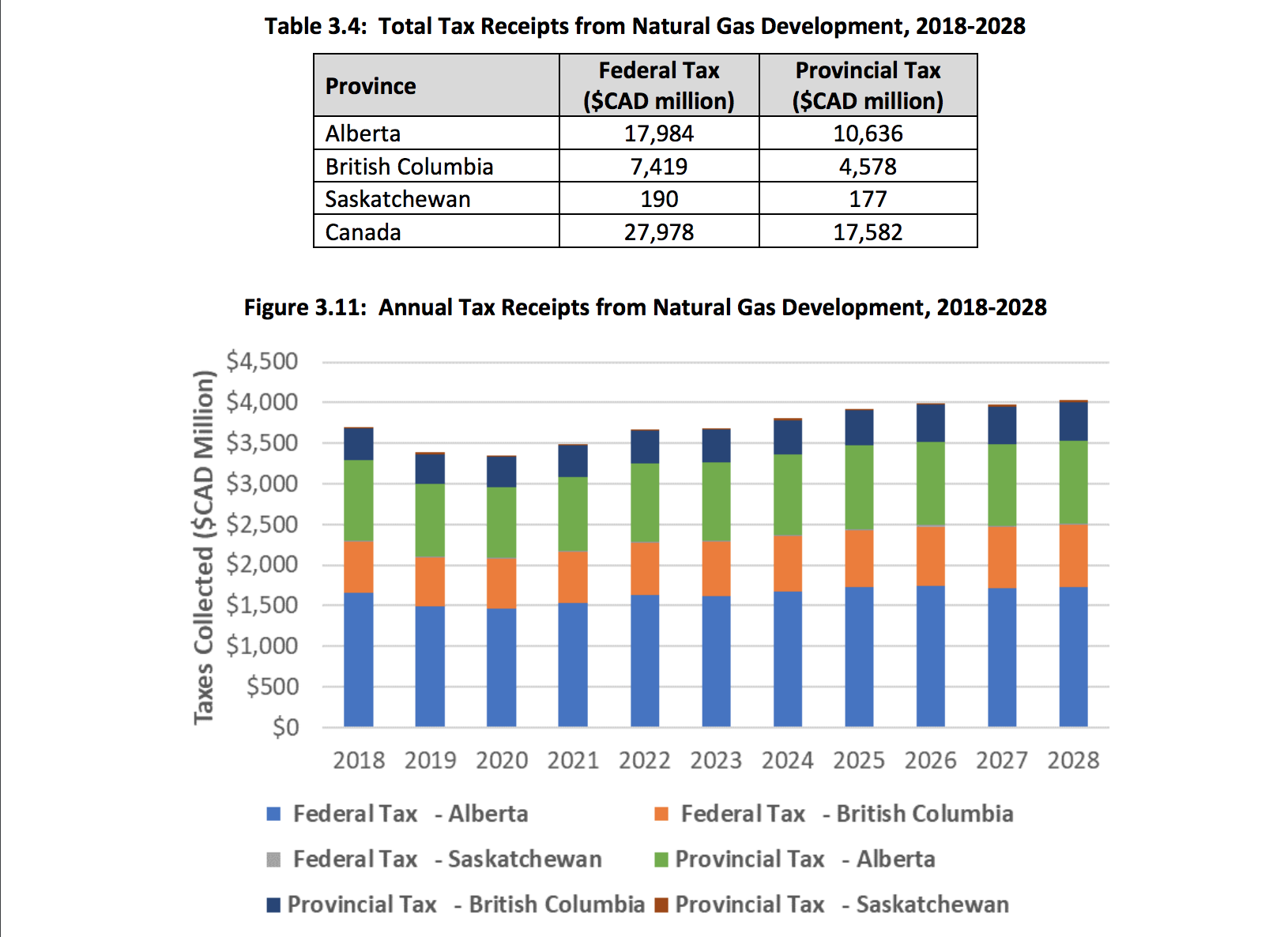 Taxes on income are considered direct taxes, while taxes on expenditures (GST, PST, HST, etc.) and all taxes deductible by corporations for income tax purposes (such as property taxes) are considered indirect taxes, states CERI. The tax impact on a corporation includes taxes generated by economic activity within a province payable to federal, provincial, and municipal governments.

The next chart shows employment impacts, most of which will be felt in Alberta with British Columbia benefiting as one would expect because it is supplying not only natural gas but also pipelines and west coast LNG terminals.

Who is going to use all this natural gas?

Looking over all of these charts showing increased natural gas revenues and jobs, it's obvious that much,much more natural gas is going to come out of that activity.

The next chart is from the energy company BP, which has a finger in natural gas and LNG pies around the world. (See their current natural gas report, here.) On the left side of the chart are the countries and regions importing LNG. China, Indian and the rest of Asia are in for major growth over the next 20 years. Where's the gas going to come from? On the right side, it's clear that the region that will expand the most is North America. Canada and the U.S. both have abundant energy as well as infrastructure and the whole set of requisite competencies needed to make the natural gas flow resulting in LNG. 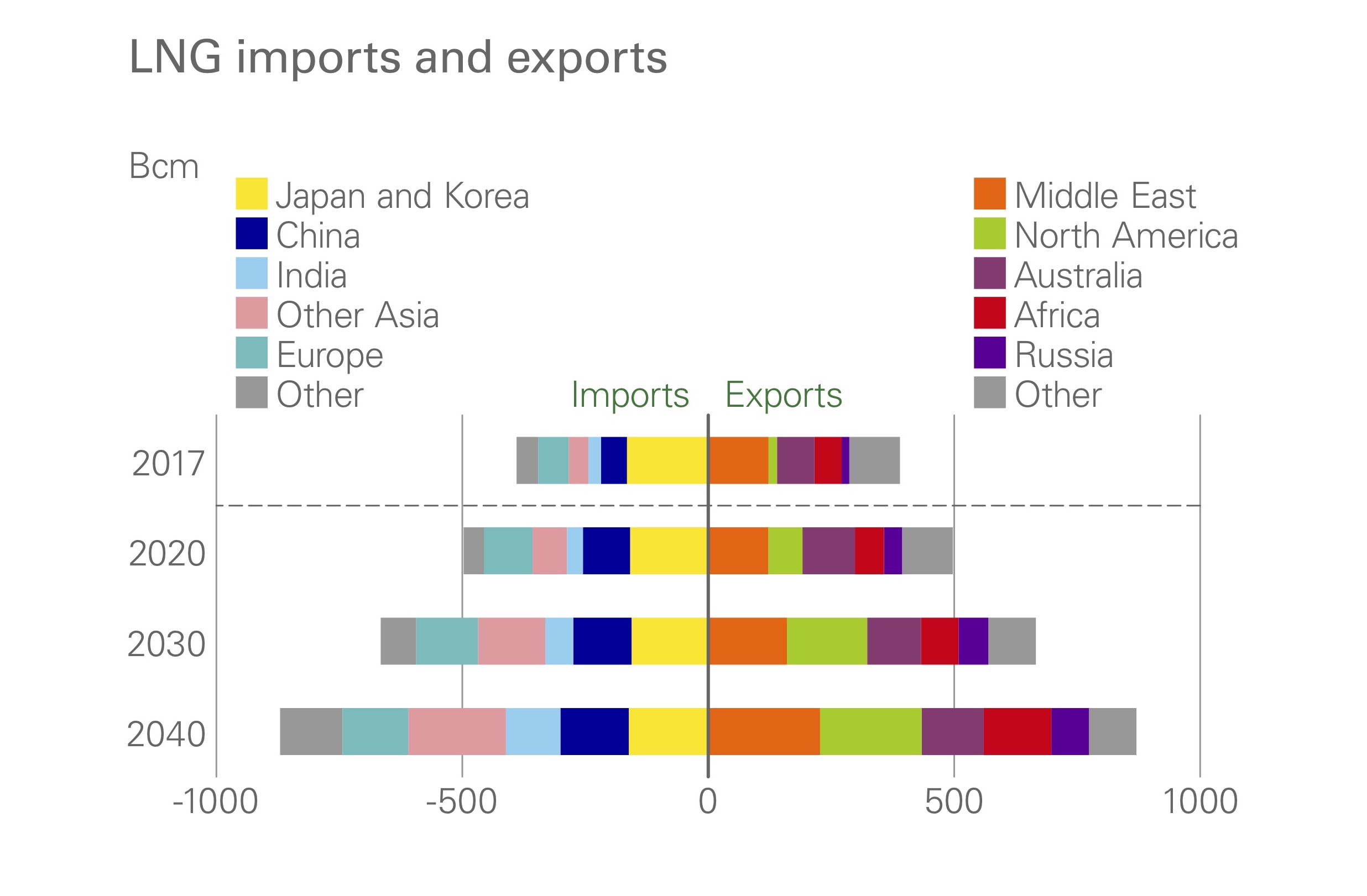 What's all this gas going to be used for? The next chart, also from BP, breaks it down. Overall, it's the generation of power in the form of electricity that is the #1 use for LNG. As it happens, this also happens to be the source of the greatest climate gains, because in most cases the addition of natural gas for power displaces coal, resulting in a halving of coal usage. For all the hype about renewables and transitioning to "zero carbon" power, life experience is teaching us that it is not so easy to accomplish these grand aspirations, even though it would be nice if we could. 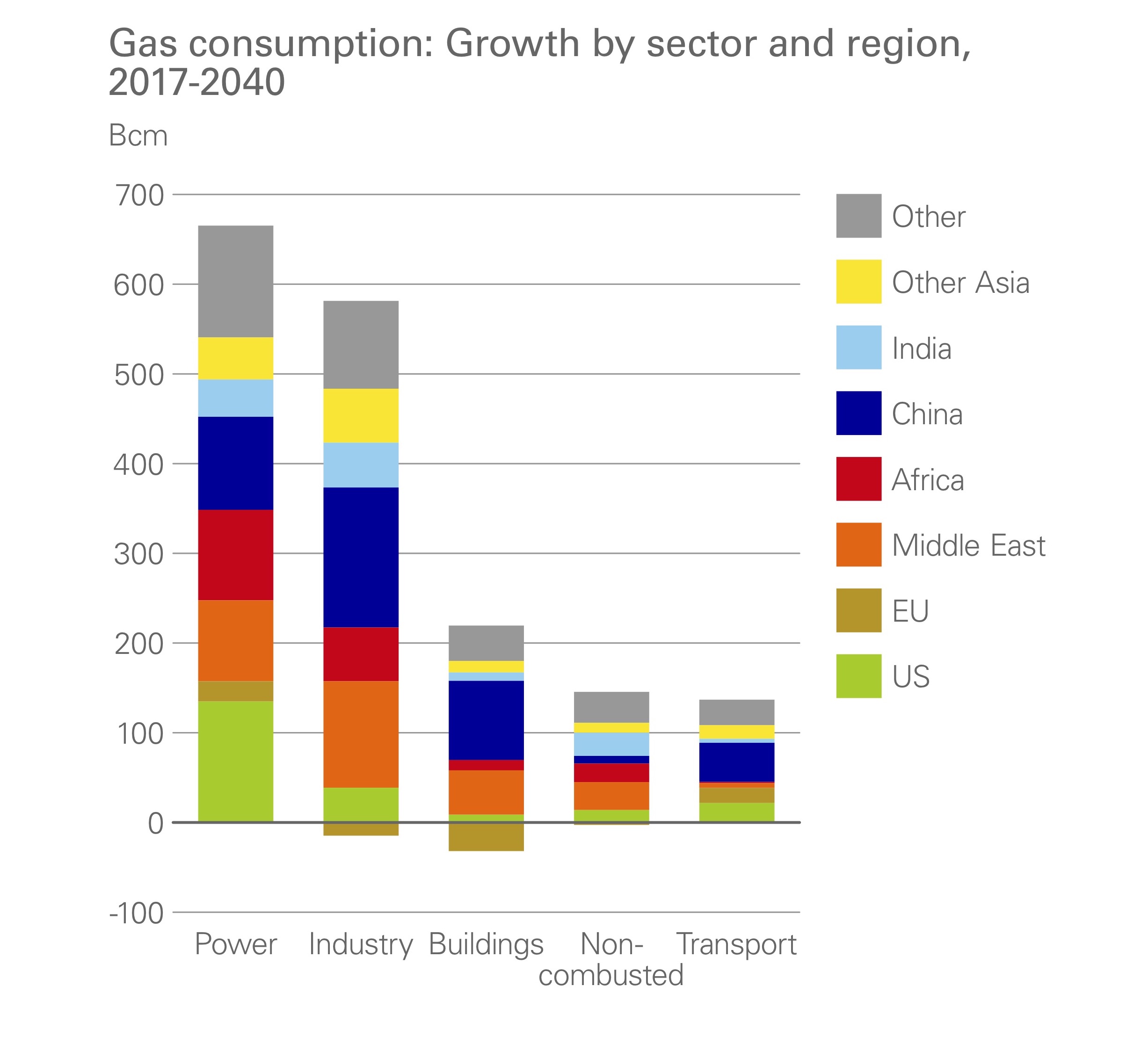 If Canada plays its cards right, the opportunity to supply LNG to global markets will unfold something like the following projection from CERI. What it shows is that natural gas production in British Columbia will supply the LNG projects currently being planned. 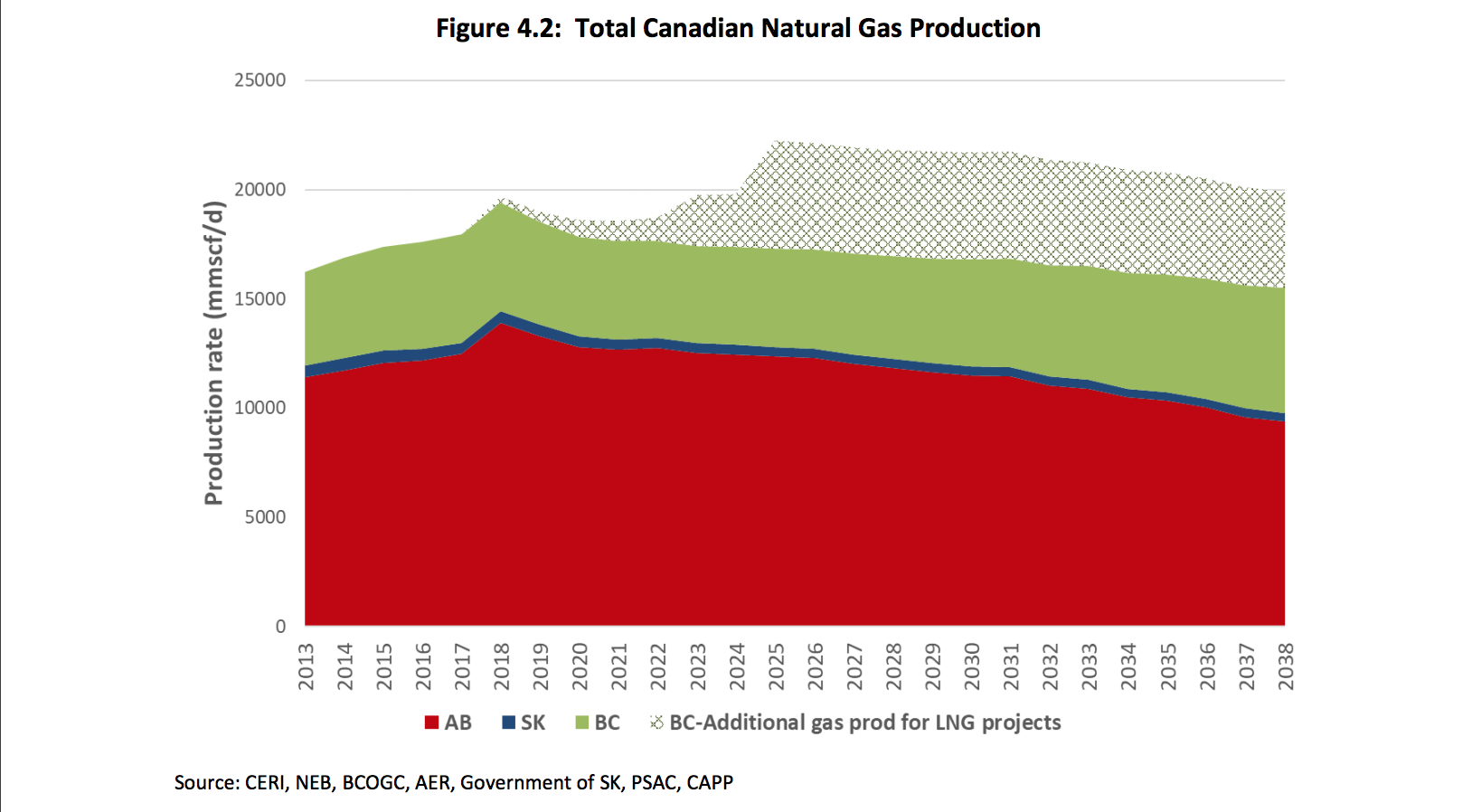 It should be pretty clear by now that there is a solid opportunity here that will create jobs, tax revenues for government, and general economic growth. For those who acknowledge this but are still bothered by the environmental and climate consequences of increased natural gas production, there are two things to think about. First of all, what counts is the global picture. If British Columbia increases its emissions a bit, so that China can decrease its emissions significantly, that's a fair equation for LNG. The second thing, which is something Canadians can be quite proud of, is that improvements in emissions performance will ensure that emissions from the production of gas in Canada are forecast to decline. 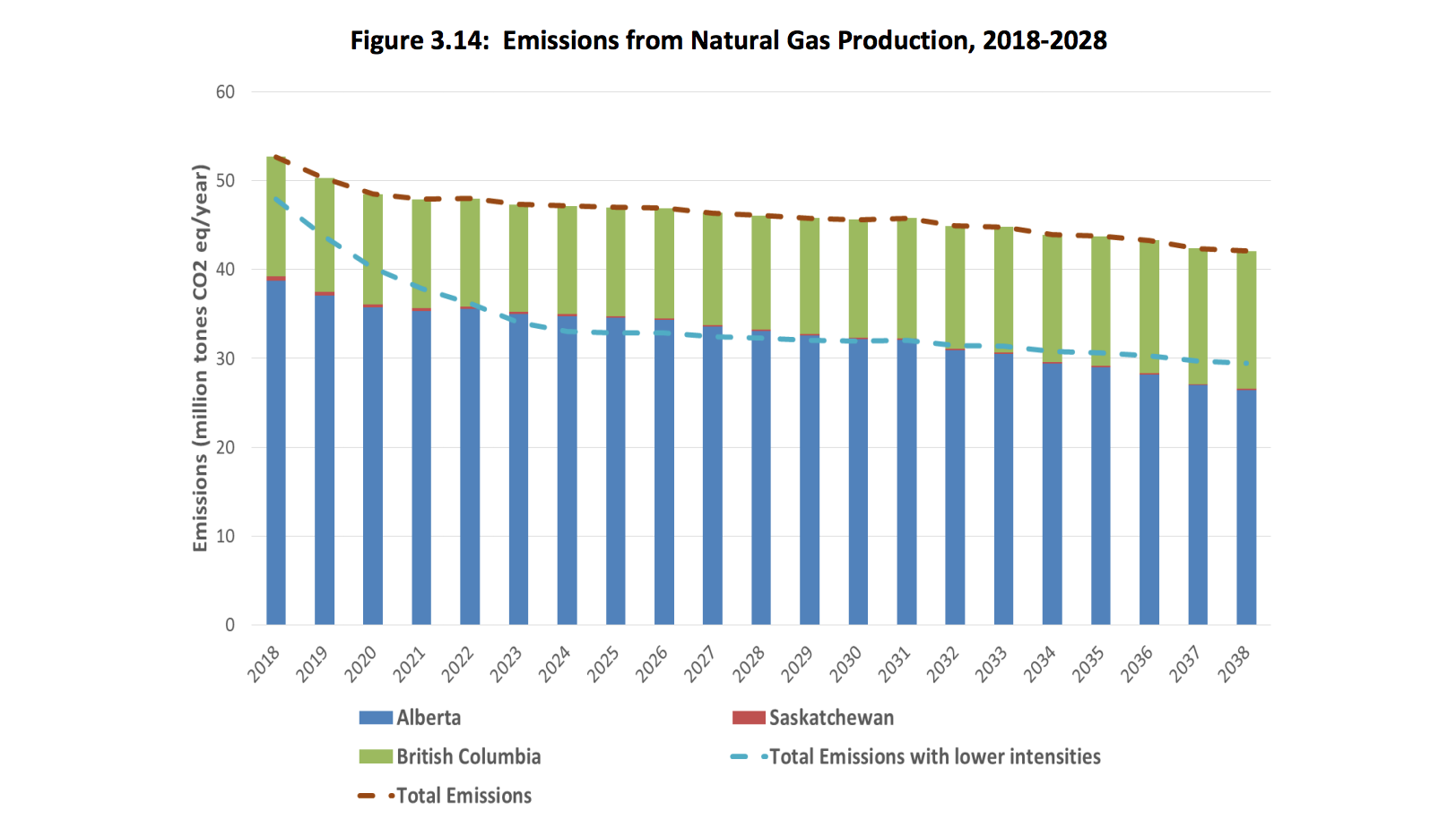 Upstream emissions encompass emissions from the following activities: drilling, production and extraction, processing in the field, and venting, flaring, and fugitive emissions. Over time, emissions intensity values have been decreasing for natural gas, with CERI forecasting, based on recent historical trends, a drop of 4.6% for natural gas production. This improvement will continue until it reaches 70 percent of the 2016 intensity rates, at which it is assumed to remain constant.

Losing our best customer and what that tells us about LNG

So far, the case is fairly clear: the natural gas/LNG industry yields benefits to the economy, plus it gets greener over time, all the while supplying something the world needs more of.

There are some dark clouds here too, unfortunately for Canada. Not so long ago, the United States looked north for a lot of its natural gas, and Canada was able to develop a profitable gas export industry based only on that market. Now that the U.S. has developed its own abundant shale gas, it is also starting to export this gas. And not just overseas. The following EIA chart from May 2019 came as a bit of a shock even to those who watch the North American gas industry:

Number one, look at the orange parts showing the rapid growth of LNG exports. Years ago, Canada was hoping to be the early adopter that would get its LNG to market ahead of the States. Due to our slower approach to things, it is the U.S. that is getting that market share while we languish in the starting gate.

A second observation is that the exports of American gas to Canada have been climbing up. At times in the past, they have also been high, but the recent trend is not what you might expect if you knew how much abundant gas production has been created in western Canada. Even though there have been some improvements in getting gas from the west to Canada's central and eastern markets, it's clear from the map below (also EIA) what is happening: Canada doesn't have enough eastward pipeline capacity to get its gas to markets like Toronto, so those places are satisfying their needs with American gas: 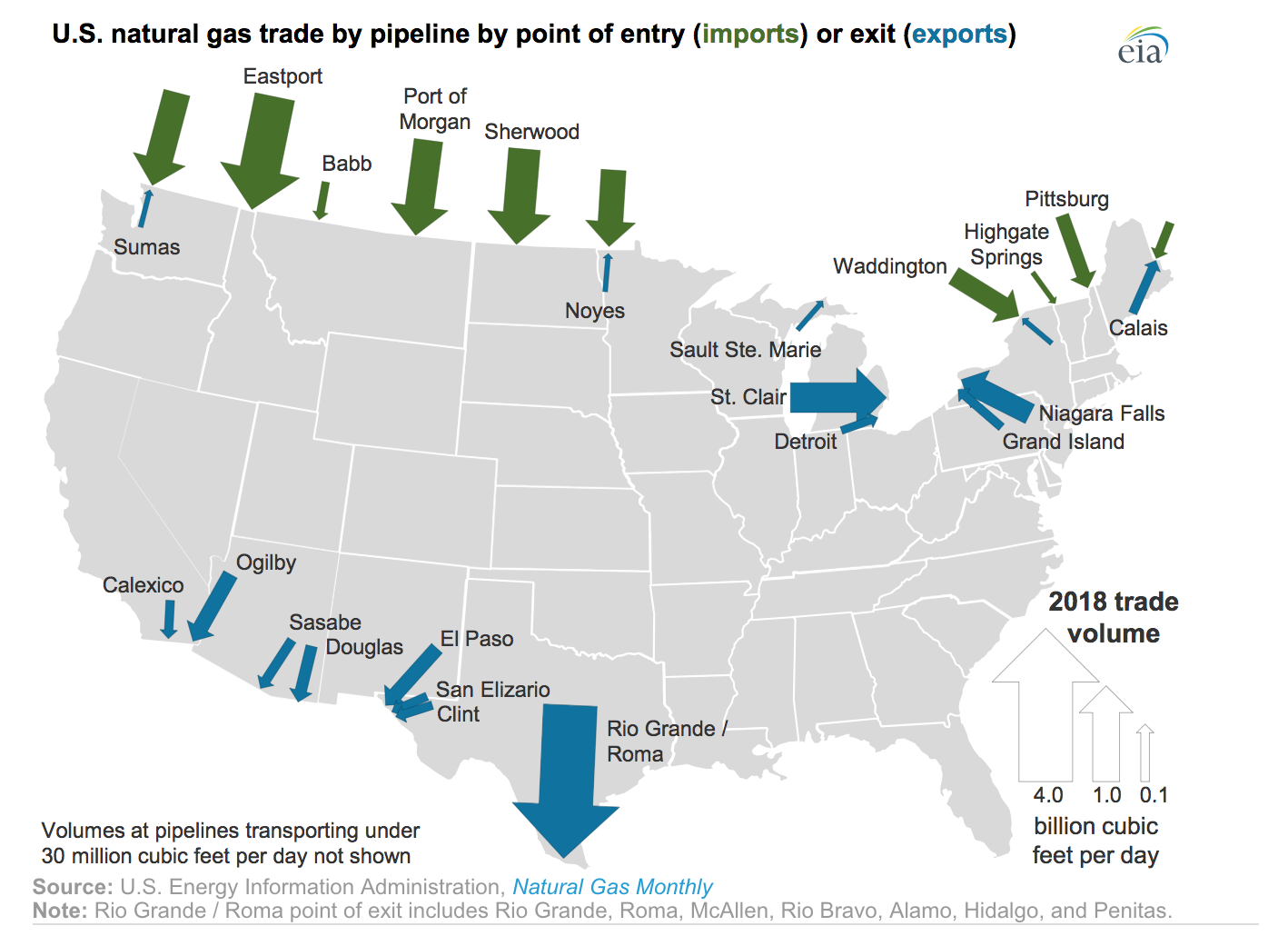 In conclusion, it's clear that the opportunities are real. The U.S. has leapfrogged past Canada in capturing Asian LNG markets, with some investors blaming cumbersome internal review processes, infighting, and adverse political intervention.

Until LNG exports have actually commenced, Canada will remain stuck with continual over-supply, constrained take-away capacity, and reliance on one customer, the United States. And it's not just about the economy because the climate benefits of LNG have been clearly demonstrated.

One thing is beyond doubt: LNG exports will be a boost for Canada’s economy and its ability as a country to contribute positively to improved environmental performance on a global scale.