Is there a "simple fix" in the battle over lumber?

An emerging viewpoint has it that restrictions on exporting logs are a "net loss" to the Canadian economy. Meantime, American critics are disputing the policy on different grounds... 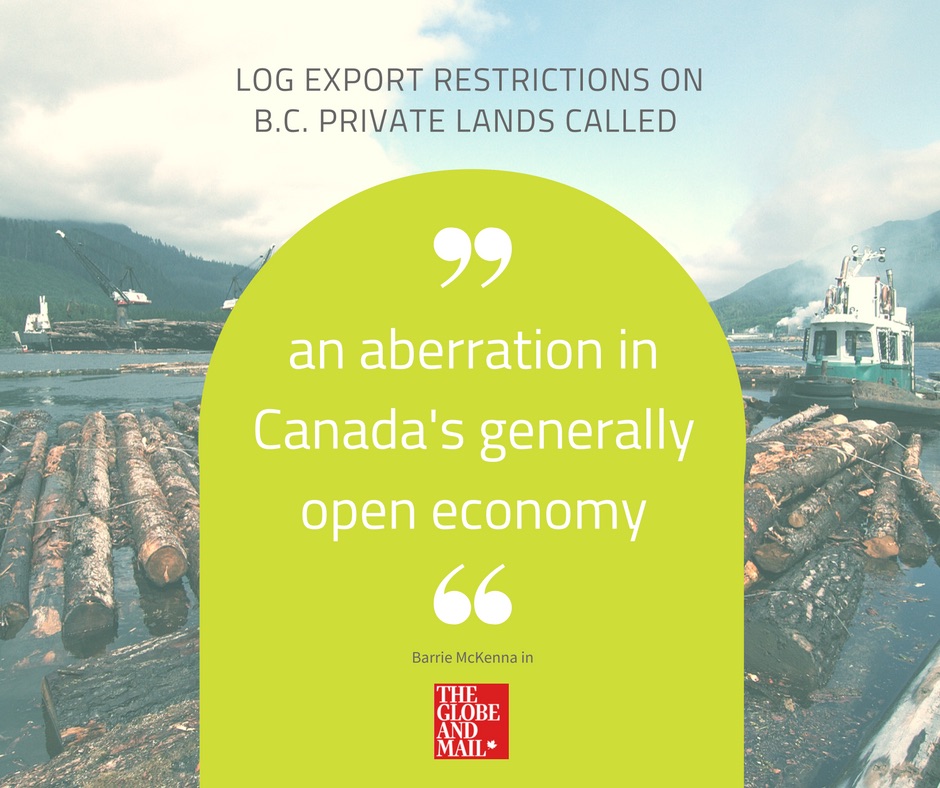 Globe and Mail business writer Barrie McKenna waded into British Columbia's often-contentious log export issue in a recent column. The context is the threat of another lumber war with the Americans as U.S.-Canada softwood lumber negotiations continue.

To many West Coast residents, the existence of a log export industry, by which Canadian logs are sold to foreign lands for conversion into other products, is evidence of Canadian sawmill jobs being "given away".

Industry's response is that this is not the situation: Producers must offer their logs to domestic mills at discount prices first, and can export them only when the mill takes a pass. If foreign buyers then buy them for the full market price, the producers are simply reaping full potential value and it keeps their crews working. It is of note as well that logs from the interior of B.C. are rarely exported because the transportation costs are prohibitive. This really is a coastal issue.

Here is where it gets interesting, according to McKenna. Though Canadian negotiators are working hard to get a softwood deal with the U.S., addressing the issue with B.C. private forest lands could ease the making of that deal if it removes a leverage point for the Americans. (It is very important to understand that McKenna's critique is aimed at private forest lands in British Columbia, and not logs from Crown land.)

We first examined the contentious log export issue in a recent post. McKenna's recent treatment means the issue is likely to be firmly on the radar of trade negotiators. Though sympathetic toward Freeland's hard work, McKenna wrote in a recent column that "Ottawa has not done one relatively simple thing that could significantly undermine U.S. industry allegations that Canada unfairly subsidizes its lumber. And that is to lift long-standing federal restrictions on log exports from private lands in British Columbia."

Calling the restrictions "an aberration in Canada’s generally open economy," McKenna pointed out that "logging is the only industry where Ottawa dictates to private interests what they can export, beyond reasons of national security," citing a 2015 study by economist Eugene Beaulieu of the University of Calgary.

The restrictions are a net loss to the Canadian economy, fly in the face of Canada’s trade obligations and undermine efforts to expand foreign markets, according to Prof. Beaulieu. “This … is a costly misguided policy,” he said.

A forthcoming study by Eric Miller, a fellow at the Woodrow Wilson International Center for Scholars in Washington, is even more strident, arguing that the restrictions are a blatant subsidy that is illegal under both the North American Free Trade Agreement and World Trade Organization rules.

“The peculiar structure of the regime guarantees B.C. wood processors access to cut-rate inputs at the expense of domestic timber harvesters, [creating] an array of distortionary effects up and down the supply chain,” according to Mr. Miller, a consultant and former Industry Canada official.

The policy lessens competition for logs, increases the supply of timber available to mills in B.C. and suppresses prices by up to 50 per cent. And that lowers the cost of finished lumber, such as 2x4s, destined for the U.S. market.

The most obvious problem for Ottawa is that maintaining the policy is like waving a flag in front of the U.S. Lumber Coalition, which said recently that it’s poised to launch a trade case at any time. A 2006 agreement between Canada and the United States that limited Canadian exports expired a year ago. Under the deal, the United States agreed not to file another case for an additional year.

Experts warn that Canada’s log export rules will almost certainly figure prominently in a trade complaint to the U.S. Commerce Department from the U.S. industry, which could come at any time.

The other major irritant for the United States is the way Canadian provinces sell timber-cutting rights to lumber producers.

Getting rid of export restrictions won’t entirely defuse that allegation, but it would simplify Canada’s defensive posture by eliminating a major vulnerability.

Many countries have them, including the United States, which has an export-licensing regime for trees cut on federal and state lands. What’s unusual about Canada’s regime is that covers trees on private land.

In Canada, roughly 90 per cent of timber available for cutting is on Crown land, and managed by the provinces. But there are vast privately held forests as well – in Atlantic Canada, and throughout B.C.

Only in B.C. does Ottawa set rules on what can be exported. The Federal Timber Advisory Committee, along with a similar provincial panel, applies a so-called “surplus test” that requires loggers to offer the timber first to lumber mills in the province.

One major private B.C. timber owner, who declined to be named, said it often sells timber at a loss to mills in the province as part of an informal quid pro [quo] that enables it to export fully priced logs in other transactions.

The policy was put in place to protect mills and jobs in Canada, and generate more high-value processing here. But critics say there are plenty of logs to go around, and that lifting restrictions on private timber would not affect trees cut on Crown land.

The U.S. is not the only objector, according to McKenna: "China, South Korea and Japan have all expressed similar concerns. Japan, for example, insists it won important concessions from Canada on log exports in the recently completed Trans-Pacific Partnership negotiations."