Hacking our way to higher ground

What's the way toward a green economy that also embraces our fundamental need for natural resources? A weekend gathering of code-free hackers had some ideas about where to search for answers...

Editor's note: Our March 17 newsletter linked to this post in error, instead of "First Nations: old thinking on resources a non-starter". We apologize for the confusion.

Don't despair. The hackathon I attended in Burnaby on March 12 was a code-free hackathon.

Still not convinced? Fair enough, because the word hackathon has not quite jumped the confines of Silicon Valley to become a household word.

To Wikipedia, a hackathon is "an event in which computer programmers and others involved in software development and hardware development, including graphic designers, interface designers and project managers, collaborate intensively on software projects."

The event I attended was a riff on this concept: the GreenCity Protohack, a 12-hour competition where aspiring or established entrepreneurs, industry leaders, designers, developers and other players, come together to connect, collaborate, and create innovative solutions through code-free prototyping and pitching while gaining education and inspiration.

Here are some participants taking a break during the event: 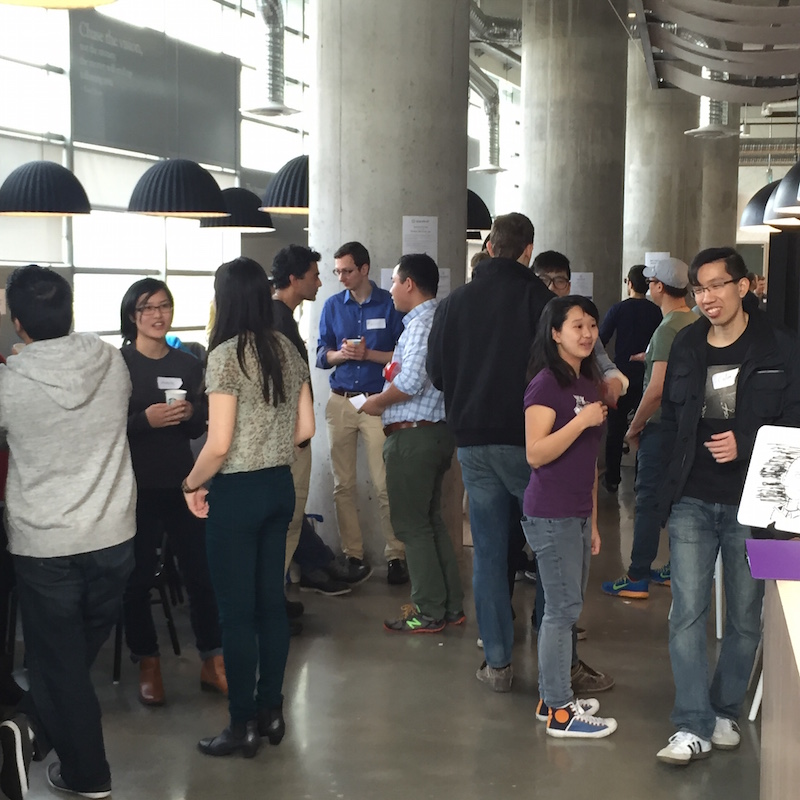 One incentive for these folks to get out of bed early on a Saturday morning was the chance to win $15,000 in patent protection, design-branding services, coworking space, and development work.

Participants didn't need to have coding experience. Anyone with an interest in the topic was welcomed.

They broke up into a number of small groups and each group worked on fleshing out, critiquing, ground-truthing, stress-testing, coffee-drinking, stretching, and occasional shouts of what sounded like "Eureka!" (Ok, not the last one.)

My role was to show up at the more civilized noon hour to discuss the mission of Resource Works.

Preparing for this group, I decided the thing to talk about was one of my favourite topics – the strong bond that exists in British Columbia between responsible resource use and the high-tech innovation that is at the core of these modern pursuits. This is a recent post we published on that very topic.

(In case you hadn't noticed, there is a bit of a cottage industry around fluffing up the myth that the natural resource sector is old fashioned, low tech, etc etc.)

It turned out I was right on the money, because most of the attendees proved, when I asked for a show of hands, to be from science backgrounds.

This is a photo of me with event organizer Vicki Li, who has done a remarkable and energetic job in a short time of bringing the protohack concept to the Lower Mainland: 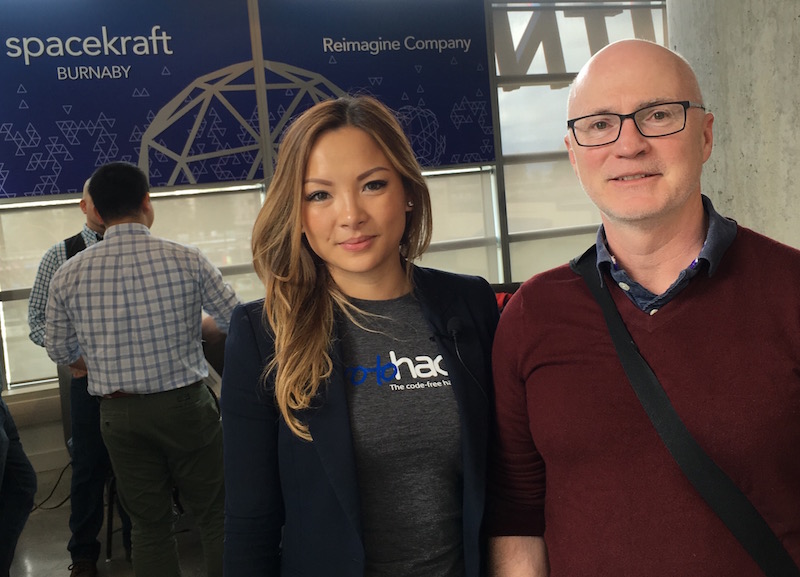 The series continues March 19 in Ottawa. It is the result of a partnership between Natural Resources Canada and San Francisco-based ProtoHack.

Fortunately for the Burnaby attendees, I was not the only speaker: immediately before me, attendees heard from Oscar Malpica (below), founder and CEO of Envisioning Labs. 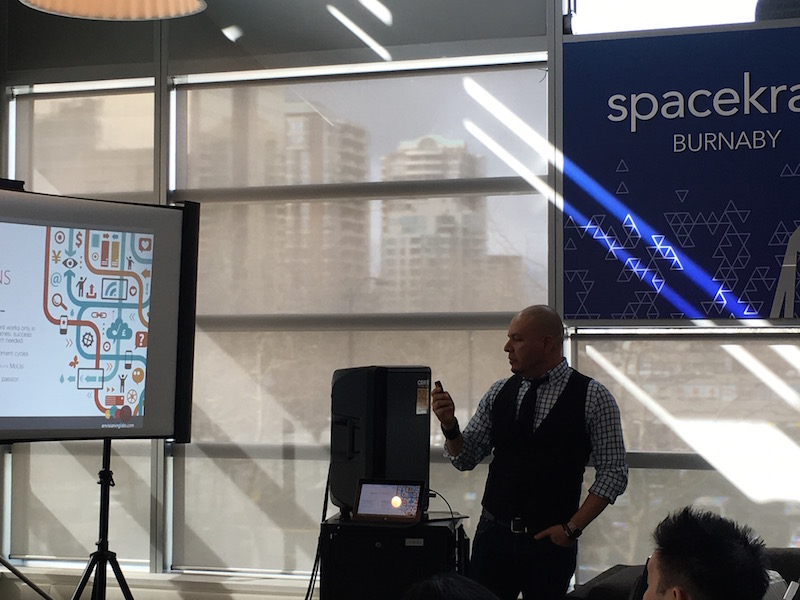 Oscar talked, among other things, about a project he is working on that sets a 45-day fly-or-fail deadline on innovative new ventures. If a concept makes it past six weeks, the thinking goes, then it might have hope of moving into the early-stage arena. If not – hey, there's always another new idea around the corner.

After my talk I stuck around and talked with a few of the groups arrayed around the co-work space at event venue, Spacekraft. Below, here I am again, this time with Hardeep and Sam. (Since either one of them could easily turn out to be my boss one day, obviously I was as polite as possible.) 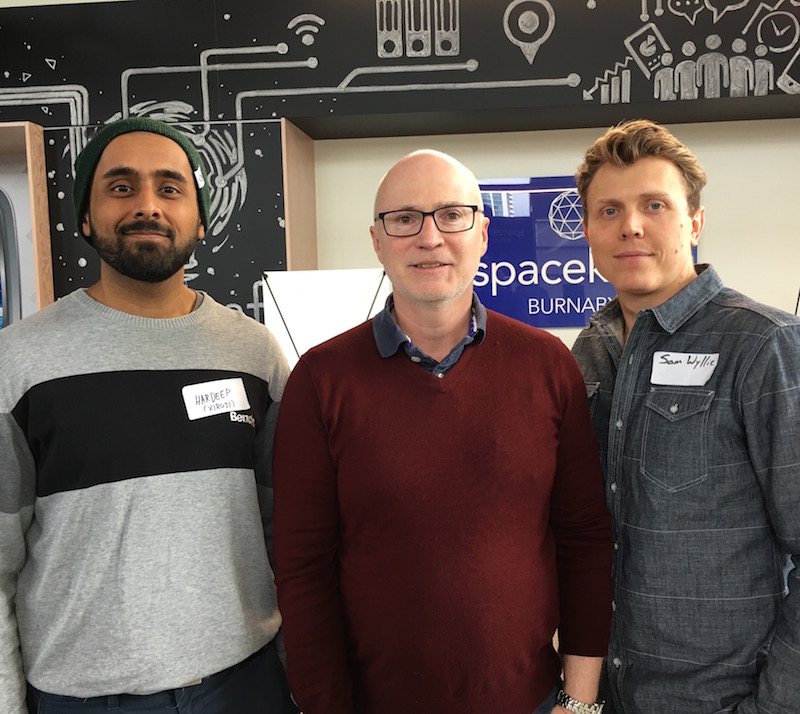 I'm not going to give away their billion-dollar brainchilds here, but in both cases they involved reducing the environmental impact of processes that ultimately are about staying warm and being able to have a hot meal.

The hackathon idea might be new, but it seems to draw from the ancient instincts of curiosity and competitiveness.

I'd be surprised if Hardeep, Sam and a lot of the other participants I met aren't out there in the near future launching companies that combine innovation, sustainability, and real-world approaches to the natural products that humanity requires.