Humanity's dependency on energy from the sun is sure to increase, though experts differ on how quick solar can be scaled up

Harvesting the power of the sun has been a human endeavour since the beginning of civilization. This infographic from SolarTech and Visual Capitalist details the history of solar energy starting in 4,000 BC.

The sun puts out 3.8 x 10^26 watts of power, and NASA scientists estimate that even capturing 0.0001% of what hits the earth would be enough to service all of our current energy needs. The potential is real, and in many parts of the world especially close to the Equator, solar is taking off.

In Canada, a lot of optimism exists that solar will be a big part of the future energy mix. However, not everybody is convinced yet that a viable path is yet identified to significantly expand solar in Canada. For example, this chart from the National Energy Board's 2016 update sees natural gas providing a much bigger part of the energy transition solution between now and 2040: 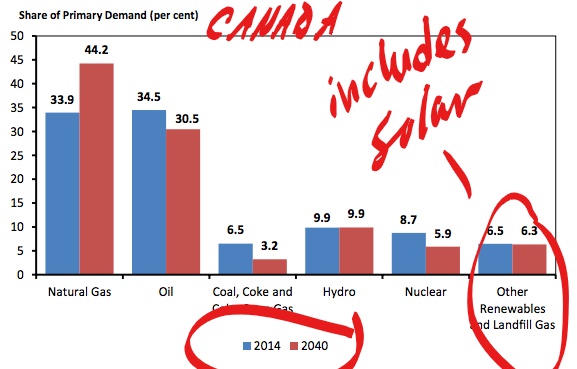 The proportionate decline of solar category, shown on the far right (this category includes solar, geothermal and renewable natural gas) highlights the fact that it will be incredibly challenging to change Canada's energy mix over this period.

There are those who point out that fossil fuels are in fact a form of solar energy, the result of photosynthesis and natural processes that have created vast reservoirs of stored energy. However, it is solar cells that most people associate with solar energy today and though we’re obviously not there, this technology is rapidly becoming cheaper than ever before. As a result, solar is finally getting queued up as a part of the future energy supply mix.