In a nutshell, taking care of the environment and ensuring that we have a strong Canadian economy are not contradictory – in fact, they can go hand in hand. Being a progressive that wants our society to deliver on social commitments, like poverty eradication, requires also understanding that without economic growth – growth that hinges on market access for Canada’s most valuable commodity – we cannot provide jobs and a social safety net for Canadians. 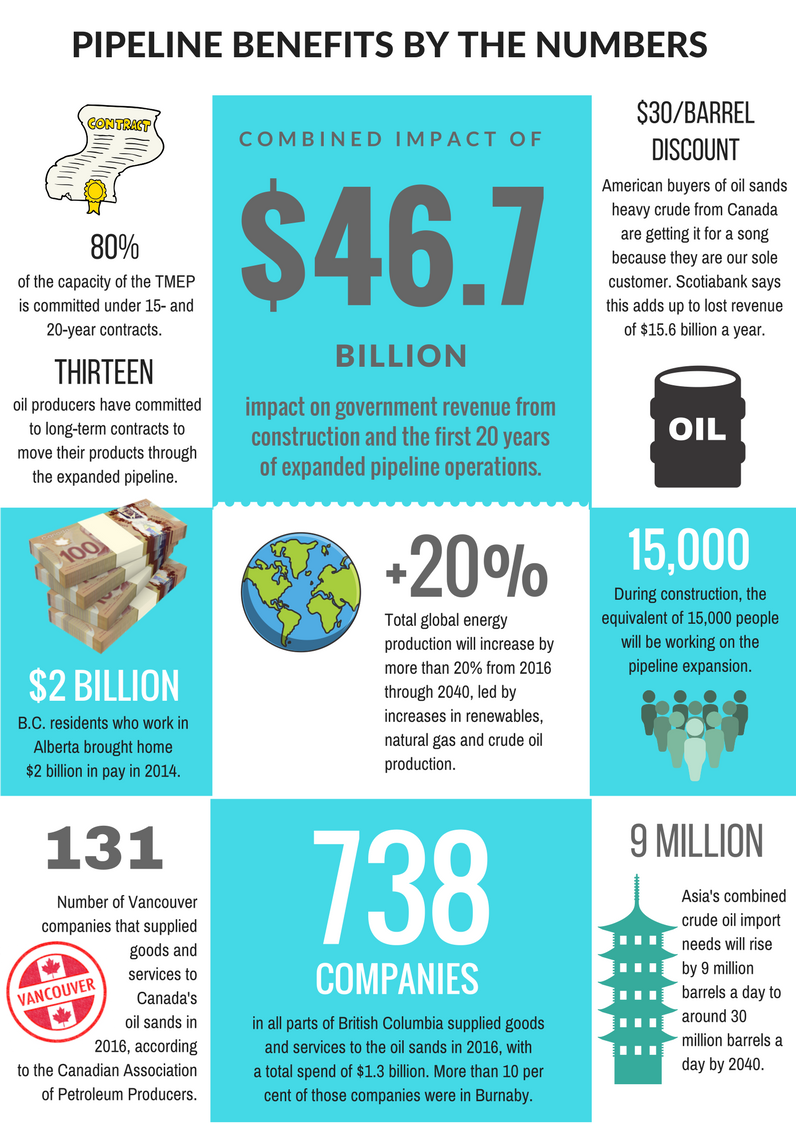 To avoid paying a price for our oil being landlocked, a pipeline must be built. With the Enbridge Northern Gateway project rejected by the federal government, only the Kinder Morgan Trans Mountain Expansion Project continues to offer that option. Opposing it is easy – so long as we conveniently forget just how critical the success of this project is to Canada’s future. Once that reality is factored in, and it must be, it become easy to see how the marine transportation of crude energy products to international markets is of strategic importance to Canada.

Recent research suggests that with better market access and new pipeline development, our nation’s oil reserves could deliver an additional $131 billion to Canada’s GDP by 2030. Imagine what this could mean for investments in our future, public- and private-sector innovation, and social and economic development.

Unlocking the wealth of the oil sands has long been central to the vision of achieving Canadian prosperity and energy independence. For decades, the United States has been the sole customer for oil and gas from Canada. Access to new, overseas markets became a necessity in recent years with the advent of technology to tap massive shale resources in the U.S. Yet Canadian oil and gas remains landlocked.

Canada is left in the unfortunate position of having to sell its crude oil to U.S. refineries at a discount, costing tens of millions a day in lost revenues.

The other piece is environmental. Climate change is a reality. Accepting it does not mean that projects like the TMEP must be rejected; we can act on climate change while still securing national prosperity.

It turns out that blocking pipelines is a very expensive means of lowering emissions, and far above the likely damages from a tonne of GHG emissions. Economist Trevor Tombe has shown that if forgone Alberta oil production is fully replaced by increased Saudi production, then the implied cost per tonne of global GHG emissions avoided is over $1,000 – quite a difference for a nation targeting $50 per tonne by 2022. Global GHG emissions from fossil fuels and industry were on track to grow by 2 per cent in 2017  -- the 5 bulk of the growth coming from emerging markets and developing countries that continue to emerge from energy poverty. Meanwhile, Canada’s share of total global emissions has decreased slightly and is now less than 2 per cent.

On the provincial front, Alberta has committed to a hard cap on total annual oil sands production, a remarkable move which has satisfied critics such as Sandy Garossino who wrote in the National Observer that it was time to back off on pipeline opposition now that the bigger long-term struggle over carbon restraint is won.

Alberta’s Climate Leadership Plan was implemented to reduce greenhouse gas emissions that cause climate change. The annual emissions limit was jointly recommended to the Alberta government by the Alberta Oil Sands Advisory Group, which included Canadian and international leaders in Alberta’s oil sand industry and leaders in Canadian and international environmental organizations.

Key aspects of the Alberta plan include:

The belief was that if Alberta accepted an emissions cap on the oilsands that this would enable Canada to meet its commitment to the Paris Accord and by demonstrating climate leadership at such a high level would result in public acceptance for pipelines to tidewater.

Prime Minister Justin Trudeau has cited Alberta’s actions on climate change for his cabinet's decision to approve the Kinder Morgan Trans Mountain pipeline. On February 4, 2018, Prime Minister Trudeau indicated that the emissions cap, pipeline and his government’s ambitious Oceans Protection Plan are a package deal. If the Trans Mountain pipeline is cancelled, as BC threatens to do, Alberta will not proceed with the emissions cap and the federal government will not proceed with the Oceans Protection Plan.

Looking at the two sides of the puzzle, economic and environmental, it becomes evident that cancellation of the project would come with high costs. At this junction, as B.C.’s government jeopardizes investor confidence, Canadians of all political stripes must come together to see it succeed, including progressives for the reasons outlined.