Do changing attitudes about oil, and projected shifts in global demand for it over coming decades, affect whether the Canadian pipeline is needed? Stewart Muir looks at what oil sands companies are telling investors about this.

How do you evaluate the financial prospects of a complex project like the Trans Mountain pipeline expansion (TMX)?

One method, and that is from the perspective of those who must persuade investors that their company is worth backing. For these folks, every day is a new Dragon's Den. Statements made in investor reports must be scrupulously accurate or the company can face stiff penalties as well as punishment in the markets.

For others, the project due to be completed in December 2022 is a piece of infrastructure they would rather not see completed. We've often heard from those promoting the idea that there is no demand for Canadian oil or Canadian bitumen. Today, I'm looking over the latest update of this perspective from a research group at Simon Fraser University. Reading this gives a sense of deja vu to those, like me, who have seen the same story served up pretty much the same way from the same source, at least a couple of times a year over the past decade.

Before jumping to conclusions, it's also worth reminding ourselves that it is companies operating in the Canadian oil sands that requested that Crown-owned Trans Mountain expand its pipeline to Vancouver in the first place. Wouldn't it make sense to see what these companies are saying to the investors and financial analysts who place their businesses under a microscope? Because if anyone would be concerned that there is no market for Canadian oil shipped via the Trans Mountain pipeline, surely it would be the investors. If I was a journalist and my job was to get both sides of the story, this is definitely something I'd be thinking about.

The Trans Mountain expansion has about a dozen so-called shippers – companies that have contracted to use the added pipeline capacity when it is ready. The number of companies fluctuates due to events like takeovers and mergers, but it has been remarkably stable over the past eight or so years, a strong signal that companies do not share the perspective of the SFU researchers. 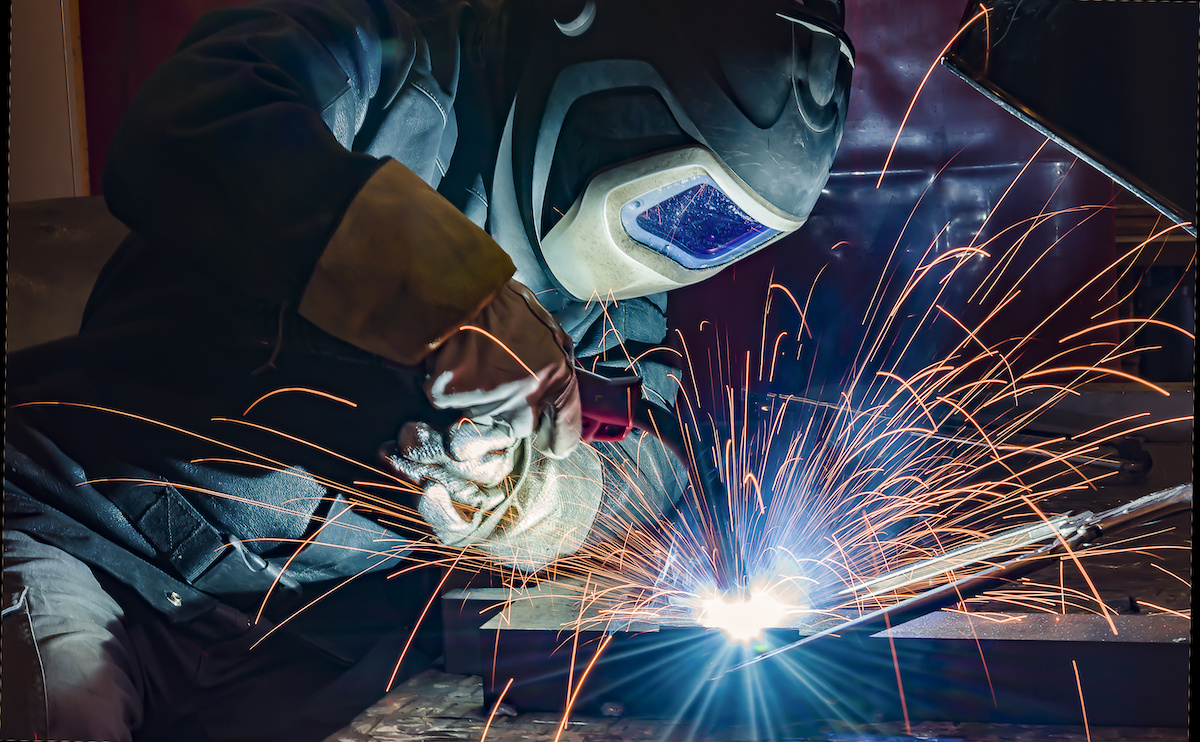 Today, as welders and a score of other tradespeople toil to complete TMX by its scheduled in-service date of December 2022, I'm looking only at the so-called upstream side of this equation, that being the oil producers themselves. Drawn from publicly available documents that can be found on the investor relations pages of their websites, here is what we know about the intentions of six of these shippers:

Athabasca has secured 20,000 barrels per day of blended bitumen capacity on the Trans Mountain pipeline expansion. Recently, it suffered a blow when its commitment of 25,000 barrels a day on the Keystone XL pipeline was scuppered when the U.S. cancelled the project. The goal of both of these plans was to "further diversify the Company’s access to multiple end markets." What will it do now, without KXL in the mix? That's not yet clear to those outside the company but it's reasonable to assume that the move makes TMX more, not less, important to the company's future.

Further details on the company's plans as they existed before KXL's cancellation:

A division of BP (better known as British Petroleum), BP Holdings Canada has a relatively small footprint in the oil sands but nevertheless owns refineries in the United States that depend on the oil sands.

Its upstream operating concern is known as Sunrise Oil Sands operations which uses in-situ steam-assisted gravity drainage (SAGD) technology whereby the injection of steam into the reservoir warms the bitumen so that it can flow to the surface through producing wells. The company also holds interests in two further oil sands lease areas through the Terre de Grace partnership and the Pike Oil Sands joint operation.

The Trans Mountain pipeline is meant to address the persistent discounting of Canadian oil to U.S. customers. States BP: "A 1% increase in discount rate would likely generate a reduction in the value of assets of $178 million, while a 1% reduction in the rate would have increased the value by $204 million." The company is also sensitive to the price of oil itself: "The Upstream impairment review on BP Holdings Canada assets calculated that a 10% price increase would add $574 million to the value of the assets, while a 10% price reduction would result in a $574 million reduction."

Beyond those general statements about the Canadian operations of BP, there is no specific mention of Trans Mountain in BP's latest annual report, but this isn't surprising given the vast global scale of the company.

As an oil sands producer, Canadian Natural Resources makes much of the unique advantage of the large deposit from which it draws its product, calling it a "large, long life low decline asset base." In other words, once costly infrastructure is in place to produce oil from the oil sands, production can be maintained at a large scale for a long time. The company projects it has "44 plus" years of oil sands life ahead of it, resulting in the tagline: "Large low cost reserves = Long-term" sustainability."

If you asked this company what risks its business faces, you might be directed to the following statement in its latest budget presentation: 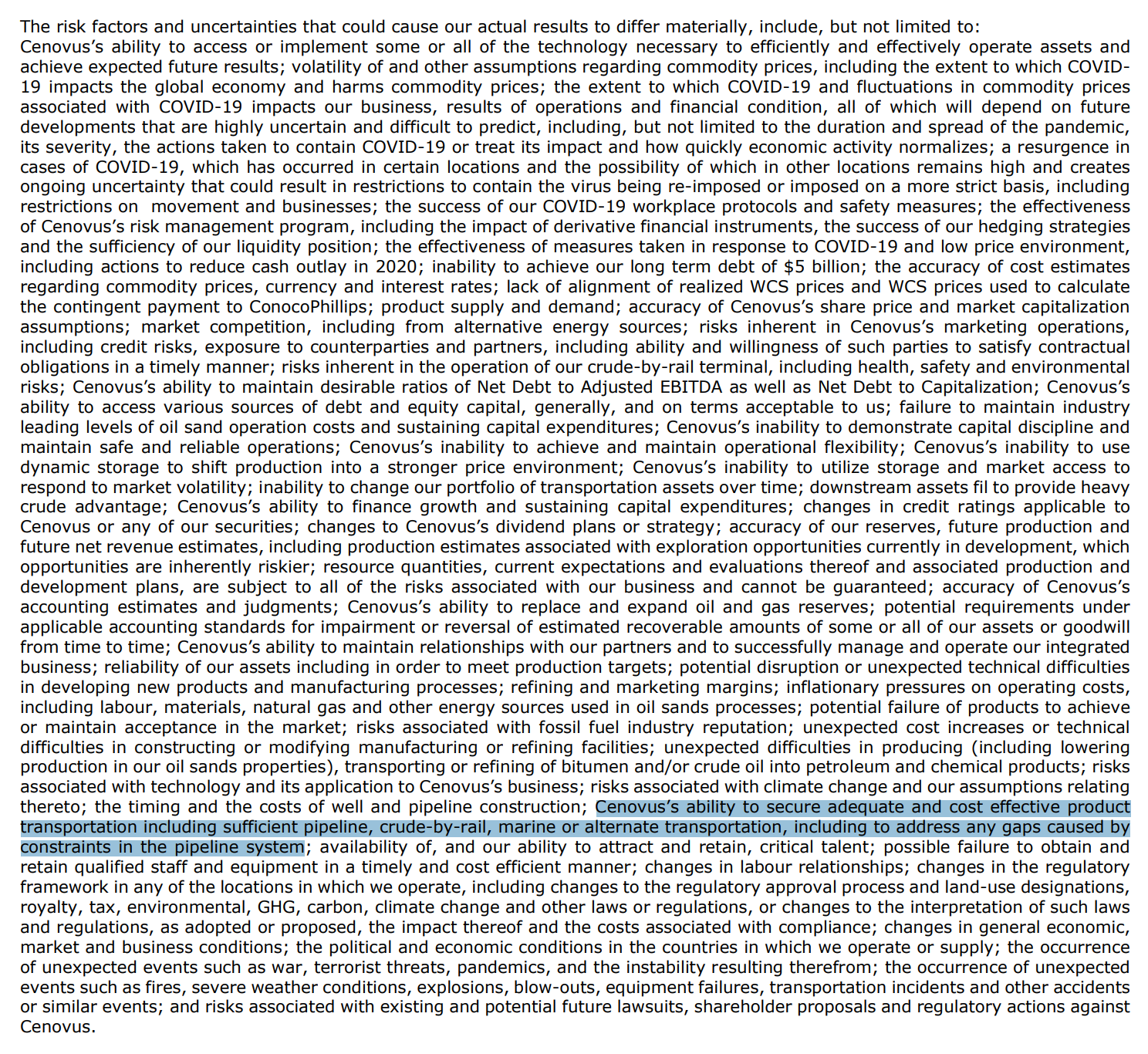 And you thought your business was full of uncertainty!

Such is the delicate environment that large energy companies operate in, a multitude of risk factors exist. Zeroing in on one relevant statement, it's clear that for Cenovus, when it comes to transportation, pipeline availability is significant: "Cenovus’s ability to secure adequate and cost effective product transportation including sufficient pipeline, crude-by-rail, marine or alternate transportation, including to address any gaps caused by constraints in the pipeline system."

This made-in-Canada success story uses steam-assisted gravity drainage to produce its oil sands products. Its most recent corporate presentation states that Canadian heavy oil is positioned to supply growth in refining capacity, in particular thanks to the anticipated completion of the Trans Mountain expansion late next year.

The company says that over the next five years, Canada's role in supplying markets for heavy oil will be secured for the long term because of Trans Mountain. This is because "significant new refinery capacity" is being added that replaces older, "simple" refineries such as in China and India with "complex" refineries that require heavy oil.

There is a lot of information in the following MEG slide, but if you're interested in this issue it's worth pausing on: 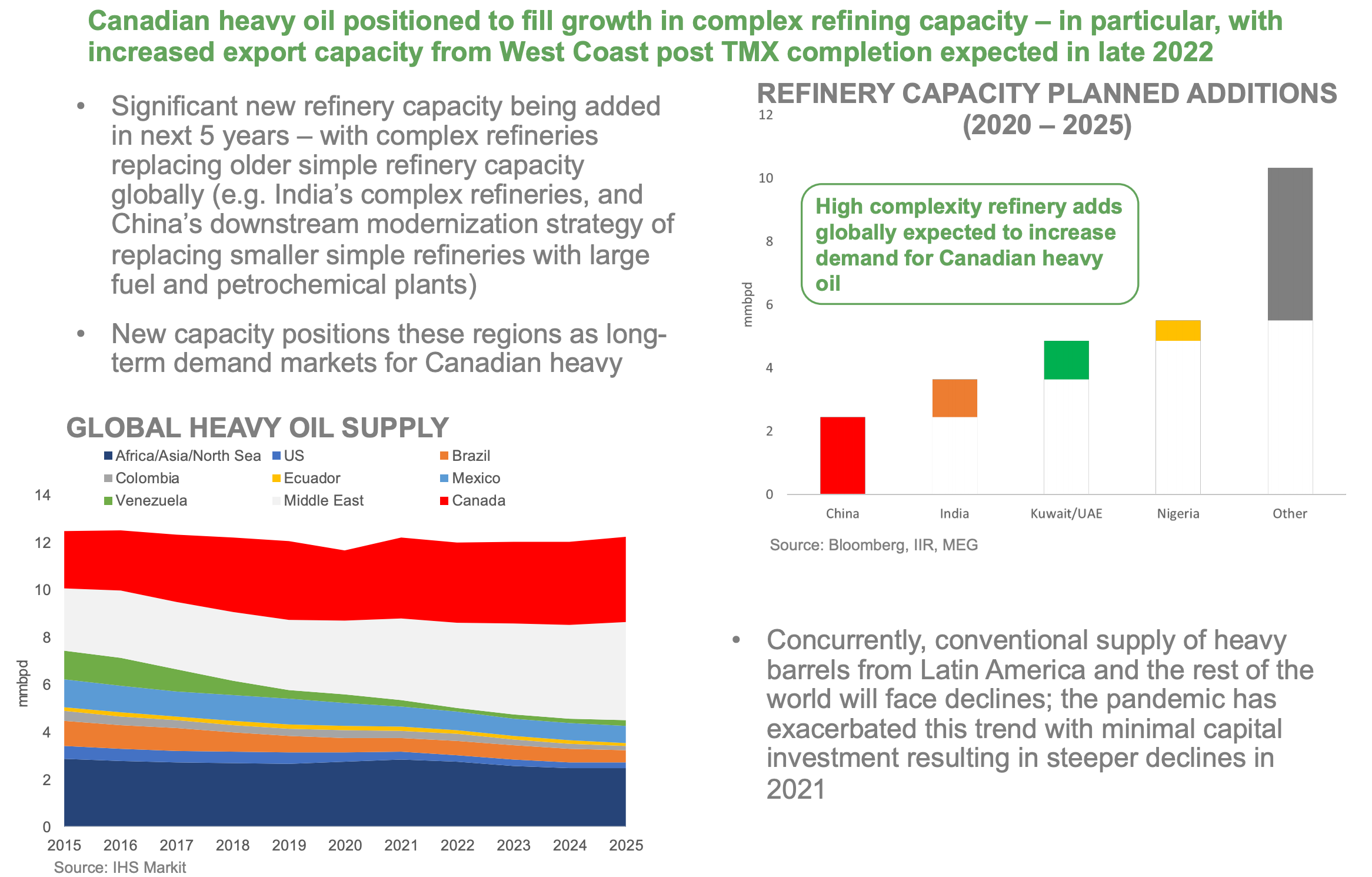 At the same time as this conversion, there is tight global supply of heavy oil. Writes MEG: "Conventional supply of heavy barrels from Latin America and the rest of the world will face declines; the pandemic has exacerbated this trend with minimal capital investment resulting in steeper declines in 2021."

This Calgary-based company was the only non-European firm to appear in a recent Global Top 10 list of company preparedness for a low-carbon world from Bloomberg called the Bloomberg Climate Transition Score. It is targeting a 30% reduction in corporate GHG intensity by 2030.

If you think your world is complicated, check out this statement from Suncor's 2020 annual report:

Factors that affect our Oil Sands segment include, but are not limited to, volatility in the prices for crude oil and other production, and the related impacts of fluctuating light/heavy and sweet/sour crude oil differentials; changes in the demand for refinery feedstock and diesel fuel, including the possibility that refiners that process our proprietary production will be closed, experience equipment failure or other accidents; our ability to operate our Oil Sands facilities reliably in order to meet production targets; the output of newly commissioned facilities, the performance of which may be difficult to predict during initial operations; our dependence on pipeline capacity and other logistical constraints, which may affect our ability to distribute our products to market and which may cause the company to delay or cancel planned growth projects in the event of insufficient takeaway capacity; our ability to finance Oil Sands economic investment and asset sustainment and maintenance capital expenditures; the availability of bitumen feedstock for upgrading operations, which can be negatively affected by poor ore grade quality, unplanned mine equipment and extraction plant maintenance, tailings storage, and in situ reservoir and equipment performance, or the unavailability of third party bitumen; changes in operating costs, including the cost of labour, natural gas and other energy sources used in oil sands processes; and our ability to complete projects, including planned maintenance events, both on time and on budget, which could be impacted by competition from other projects (including other oil sands projects) for goods and services and demands on infrastructure in Alberta’s Wood Buffalo region and the surrounding area (including housing, roads and schools).

The company is making investments in sustainability so that its currently projected 29 years of oil sands reserves can be brought sustainably to market. Sales of bitumen result in a profit margin of $18 a barrel over the past couple of years. The company is also committed to achieving higher profit margins ($25 a barrel) for bitumen that is upgraded to higher-value synthetic crude oil. Expansion of Suncor's Burrard product terminal in Vancouver and optimization of its marine vessel activities point to preparation for utilizing the Trans Mountain pipeline expansion when it's ready.

The company says that bitumen production that it does not upgrade is blended with diluent to facilitate delivery on pipeline systems. Bitumen pricing is often discounted but 2020 saw favourable trends.

Although Suncor doesn't talk about Trans Mountain in its annual report, it does mention that it has "entered into a pipeline commitment of $5.9 billion with a contract term of 20 years, which is contingent upon completion of the pipeline," which can only be a description of the project. The company notes that changes in "government policy, regulation or other laws, or the interpretation thereof, or opposition to Suncor’s projects or third-party pipeline and infrastructure projects that delays or prevents necessary permits or regulatory approvals, or which makes current operations or growth projects less profitable or uneconomic could materially impact Suncor’s operations, existing and planned projects, financial condition, reserves and results of operations."

Suncor's analysis points to one of the biggest concerns for Canadian oil and gas producers generally: "More stringent GHG emissions regulations in the jurisdictions in which Suncor operates may also make it difficult for Suncor to compete with companies operating in other jurisdictions with less costly regulations."

Many observers see that as the supreme irony affecting Canadian producers: that the reward for Canada's high environmental performance will mostly be enjoyed by countries that shun human rights and environmental responsibility.

Though most Canadians understand that selling our oil to the U.S. at a discount is economically and environmentally irresponsible, there are critics who argue that these issues aside, there is no future international market for Canadian oil.

Statements made by business executives about the operations and future revenues of publicly traded companies must be scrupulously accurate, or else those individuals face serious consequences from investors and regulators. Statements in any published documents they produce are not taken lightly by their intended audiences, and that is why such items should be regarded as quite relevant in public-policy discussions.

Who should you believe? Ultimately, that's a personal decision.