In one slide, why the Kinder Morgan pipeline is in Canada's vital national interest

Next time you hear someone claim we can do without the B.C. pipeline expansion, don't be swayed. Without crude oil exports, Canada simply cannot pay the rent. 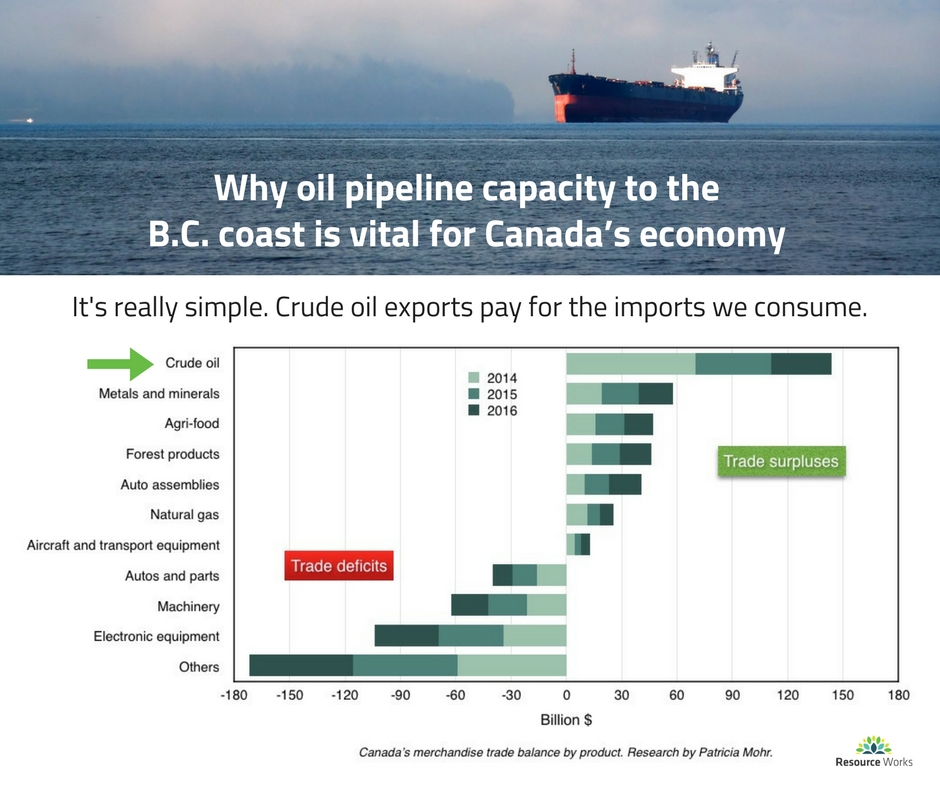 As British Columbia political parties jockey for position after the tight provincial election results, it will be tempting for them to turn the Trans Mountain Pipeline Expansion project into a bargaining chip and propaganda tool.

For the good of Canada, we have a simple message to them: you and all Canadians will pay a high price later if you undermine the nation's fiscal sustainability with intransigent positions on the pipeline. The reason is simple: crude oil is what pays the rent in Canada, a point vividly made in the accompanying chart.

Remove crude exports from this picture and consider the resulting economic chaos: we currently have no alternative way to pay for the machinery, electronic equipment, and diverse other goods that Canadians depend on for their health and everyday existence.

At Resource Works, our Advisory Council met recently to hear from renowned bank economist Patricia Mohr. With dispassionate ease, this career-long practitioner laid down some basic resource economics that opened many eyes to the gravity of the current situation, and what the loss of a golden opportunity means for us as Canadians:

Ms. Mohr's conclusion was that oil pipeline capacity to the B.C. and Atlantic coasts is vital for the national economy. Or, as she put it, crude oil is "what pays the rent in Canada". The chart above is based on her research. It shows Canada's merchandise trade balance by product for the three most recent years. Can you imagine Canadian prosperity without the contribution of crude oil?