'Not afraid' - two words to rally around on social license topic 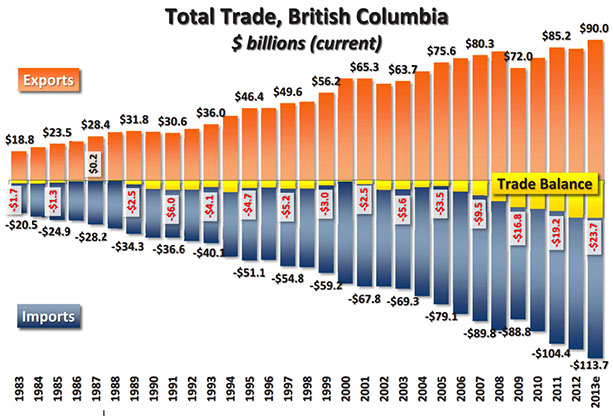 The only year when the dollar value of imports sank was 2009, and that was as a consequence of the worst global recession in the living memory of most of us. Otherwise, no matter the vagaries of the world economy, the value of our imports has steadily grown.

Exports were a different story. In 1990, 1991, 2002, 2009 and 2012, BC saw declines in export value. Given the importance of resource products in our export mix, we know that the price of these commodities has major sway in the stability of our export earnings.

So here’s the question: if consumption is always rising but production faces challenges, what are we to do?
It is common for critics of the resource economy to seize on this circumstance to say “aha - yet another reason to move past this crude source of economic gain – Canadians should no longer be mere hewers of wood and carriers of water, because it ties us to commodity price swings.”

We also hear that people consume too much stuff today - and you don’t have to be David Suzuki to ponder this walking into a Wal-Mart. But most of our spending needs are more fundamental than that, like health care and education, and they must be funded somehow.

We simply do not have an alternative to the resource economy at this point in time. So we must do our best – in the most environmentally sound ways – or prepare for declining quality of life.

Resource Works will examine this issue in more detail in future, but suffice to say for now that based on current trends it appears that goods – read resource commodities, which are 80 per cent of BC’s goods exports – will hold the majority share of our export mix until at least 2057.

This is why our natural legacies, developed through enterprise in forestry, mining, energy, and aquaculture, hold the key to prosperity. The question for most citizens today is this: How can they be confident they will have a sustainable quality of life at the same time as respecting the environment?

In 2015, the Resource Works movement is growing because we are all coming to the same conclusion at the same time: without a better conversation on the economy and the environment, Canadians’ needs will not be well served.

The aim of Resource Works is to bring 100,000 British Columbians on board this year to support our cause.

On Jan. 14, Resource Works moved forward in a significant way when we hosted thinker Brian Lee Crowley for a pair of panel discussions. (Thanks are due to our event partner the BC Maritime Employers’ Association.)

Brian is the founder of the Macdonald-Laurier Institute. Although Vancouver is his birthplace, the institute is run out of Ottawa. He addressed an audience that consisted mostly of individuals from labour, business, government and environmental organizations.

What stuck out in my mind were Brian’s points that:

- The idea that “change must be approved by its opponents” – Brian’s take on social license as that term is often used today – is fundamentally flawed.

- Those who constantly seek to undermine the authority and legitimacy of Canadian regulators are eroding our democracy by dismissing the rule of law.

- It’s time for something like a Royal Commission so that Canadian natural resource development, the key to national prosperity, can be part of a bigger vision of nationhood  that is not constantly mired in localized disputes over project approvals.

- Those of us who have connected the dots on these issues must stand together - and stop being defensive about holding positions that are ethical and arrived at through due deliberation.

- Two words from Brian: “Not afraid."

The quality of the questions we heard indicated that there was true resonance in these messages. I am looking forward to providing further analysis of that in a future post.